Samsung launched the 850 EVO couple of months ago. The 850 EVO paired Samsung’s own MGX/MEX controller with its 2nd Gen 40nm processing node 3D V-NAND. Samsung packed the 850 EVO with improved TurboWrite and RAPID Mode 2.0 technologies. The result is that the 850 EVO is a very competitive drive that delivers excellent performance and features. 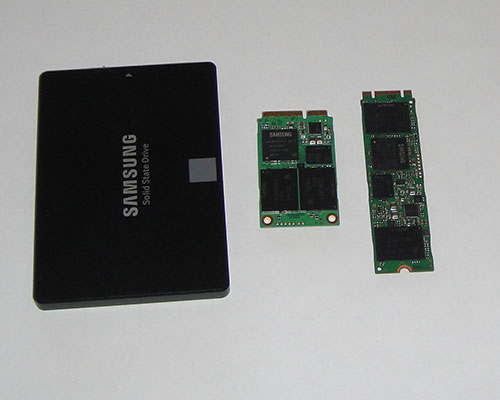 The 850 EVO we reviewed a couple of month ago uses SATA 6 Gbps interface that is typical for a desktop system. The growing trends of moving toward more compact computing devices such as laptops and small form factor PC means that even the relatively small 2.5” SATA drive with its dimension of 7 cm x 10 cm x 0.7 cm (LWD) is taking up way too much of the precious space in these systems. The mSATA was designed to help reduce the footprint of the storage devices but it never quite caught on. The M.2, also known as Next Generation Form Factor (NGFF), is the latest interface that is designed to reduce not only the footprint but also maximize the usage of the card space. Since M.2 utilizes PCIE interface, it can deliver up to 32 GBit/s when using PCIE 3.0 x4 interface (though no drive is yet capable to taking such bandwidth). Compare this to the 6 Gbit/s, and we can see the benefit of M.2.

Being the biggest company in the computer industry, Samsung is quick to deliver the latest 850 EVO with the latest interface. Today, we have got the 850 EVO with mSATA and m.2 interface that we put through our tests.

To recap, the 850 EVO is taking the best of the 840 EVO and the 850 Pro that Samsung has launched last year. The 850 EVO combines the affordable pricing of the 840 EVO and the performance and power saving features from the 3D-NAND technology on the 850 Pro. Like the 850 Pro, the 850 EVO uses Samsung 2nd Gen V-NAND that is manufactured with 40nm process node. It has 32 layers. Each die has a capacity of 86 Gbit (10.75 GB). The move to 3D-NAND allows Samsung to pack more storage space in the same die area, lower the power consumption and improves on the drive’s endurance. The ability to pack more storage is essential for mSATA and M.2 as you only got so much space to work with. While the largest storage capacity that is available with the 850 EVO mSATA is still 1TB like the 840 EVO, we could possibly see Samsung delivers larger capacity in the future if the market demand is high. 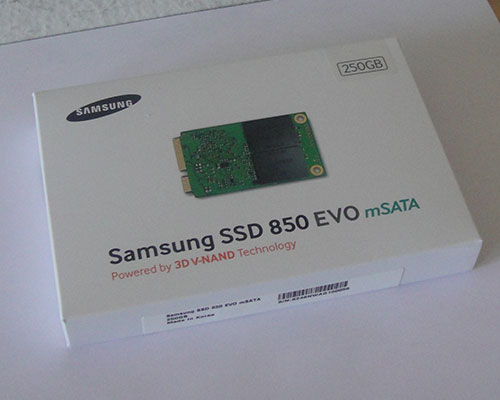 As expected, the m.2 and the mSATA drives will feature everything like its SATA counterpart. This includes AES 256-bit full disk hardware-based encryption. TCG/Opal V2.0, IEEE1667 security. They also support TRIM, Garbage collection, and SMART.The 850 EVO carries all of the features found on the 850 Pro. It comes with improved TurboWrite, RAPID Mode 2.0, and improved power efficiency.

As you may recall, TurboWrite is a feature that Samsung first introduced with the 840 EVO where data are first written to the drive’s high-performance buffer region that simulates SLC then when the system is idle, the data would be stored to the NAND. As SLC has a much faster write speed than the MLC, by simulating write speed as SLC, it improves the drive’s write performance. This would yield improvement in the system responsiveness. With 850 EVO, Samsung implemented TurboWrite on both sequential and random write. We had looked at the TurboWrite performance with our 850 EVO, so you can look over the result there. Basically, TurboWrite works very well on the 850 EVO where we are able to get about twice of the write performance over non-Turbo.

The RAPID Mode 2.0 and Magician

All 850 EVO comes with RAPID Mode 2.0, an enhanced version over the previous iteration. Samsung launched the 2.1 version with the 850 EVO where it improves o the error handling and fixed compatibility issues with IRST. RAPID mode uses system memory to cache IOs. The original 840 EVO uses 1GB of RAM (or up to 25% for system with less than 4GB of RAM). The launch of the 850 Pro brings us RAPID Mode 2.0 where the maximum amount of ram has been increased. The latest version would use up the RAM to 4GB for system with 16GB or more RAM. For system with less than 16GB of RAM, it will use 25% of the RAM for caching. According to Samsung, the new RAPID mode v2.1 can deliver up to 1.8 times performance gain at application start-up and windows loading. 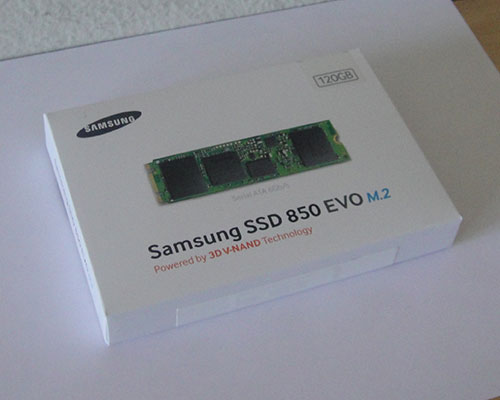 The RAPID Mode requires installation of the latest Magician software (version 4.6) from Samsung. The previous version 4.5 that we had did not work with M.2 and the mSATA drives. We did not receive the software in time for the review but you can always download it from Samsung’s website once it is launched.

Our testing with the RAPID mode on the SATA model of the 850 EVO shows that it does helps with the application loading. The improvement depends on the transfer size where it has the biggest gain with the larger transfer file size and sequential write. Random read, on the other hand, does not seem to benefit from RAPID mode and in fact it could impact the performance slightly.

Power consumption is another area that the 850 EVO has improved over the 840 EVO. Thanks to the 3D V-NAND, the 850 EVO consumes less power than the 2D NAND on the 840 EVO. The power consumption remained the same regardless of the interface. All drives has a maximum idle power of 500 mW. In addition, the 120GB/250GB/500GB drive has a rated Deep Sleep of 2mW (120/250/500GB) and the 1TB is rated for 4mW. The support for the Deep Power Sleep is not as critical for SATA drive if you plan to use it on a desktop for for the M.2 and mSATA, it is essential as they are meant to be used in a portable devices. This means that your system would utilize less power when it is in Sleep mode. For mobile computers, this would also leads to longer battery life so you use the laptop longer between recharges. Not only that you could use the system longer before you have to find a plug, it would also mean that the battery would also lasts longer when it is in standby.