I took power consumption at the wall using a Kill A Watt Power drain measurement device, I loaded Unigine Heaven and let it idle for 30 minutes recorded the Idle temperature and Power Consumption, shut it down and let it cool for a half hour then repeated the test twice in this sequence, For the load I ran Unigine Heaven looping for 30 minutes, let it cool down to the Idle temps established in the previous test then looped it 30 minutes repeating the process a total of 3 times. Once completed I take the three results form each test and average them giving me an aggregate  average for each result. Killing two birds with one stone and getting Power Consumption and Thermals. 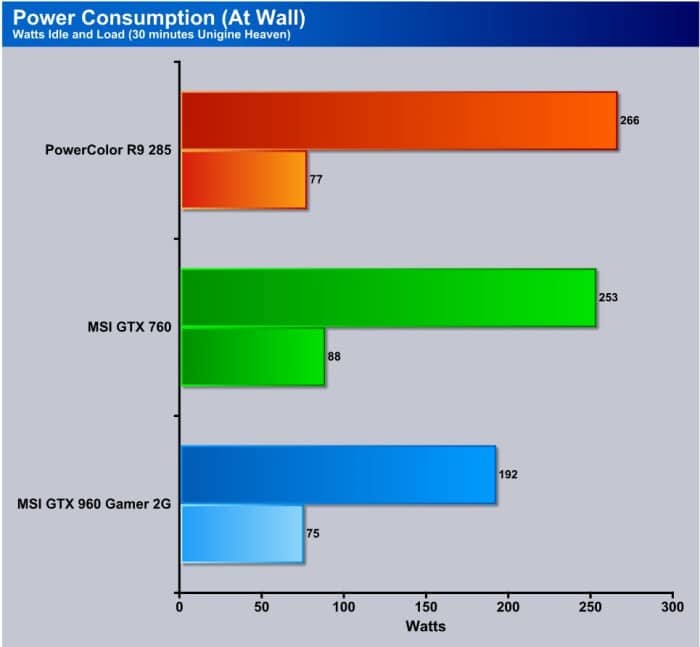 The MSI GTX 960 Gamer G2 Idles at 75W while the R9 295 idles at 77. The load power consumption tells the story here, the R9 285 guzzles 266W at the wall and the MSi GTX 960 192W so the R9 285 eats 85W more than the MSI GTX 960. Some of you might say big deal 85W, some countries power is much more expensive than in the USA, in the Desert where I live E;electric bills can run in excess of $300 a month when the same consumption else where in the us hits $150 so I watch and am concerned with the power consumption of all devices. The power advantage goes to the MSI GTX 960 Gamer G2. 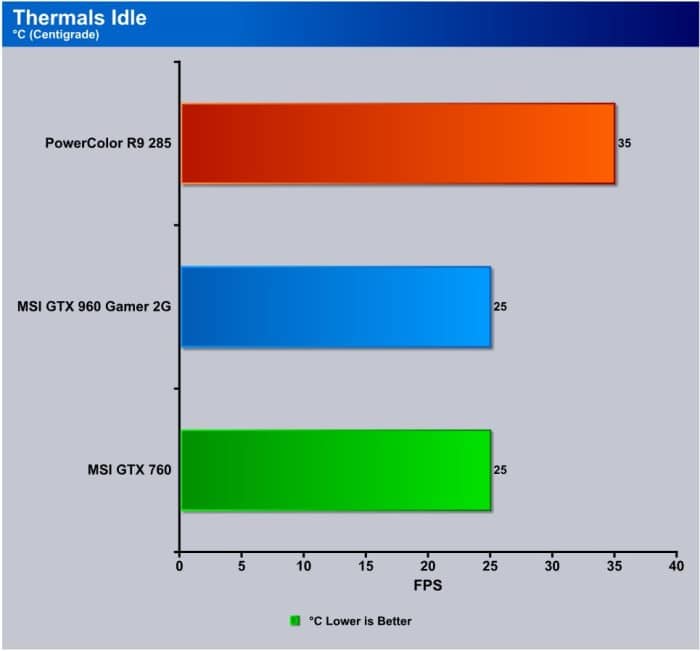 Drinking more power also means a GPU produces more heat and the R9 285 bears that out coming in at 10°C higher, 10°C is 16.2°F hotter than the MSI GTX 260 Gamer G2, heat build up in chassis dows affect overclocking performance so a little more cooling dollars might have to be spent if using the R9 285. Normally more heat means higher fan speeds and that equates to more noise so we are seeing power and heat as well as noise advantages with the MSI GTX 960 Gamer G2. 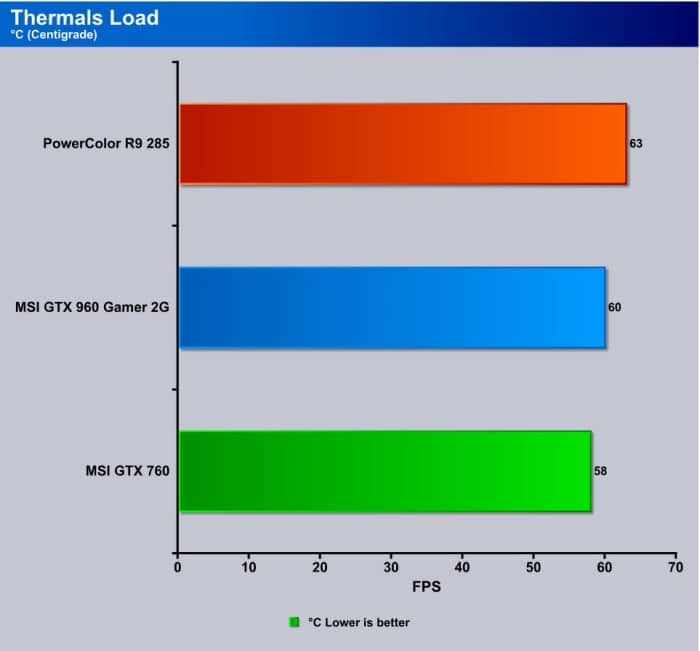 The gap narrows considerably when all the GPU’s are under load, top to bottom 5°C and mot really enough divergence here to worry about. Please note I took thermals prior to disassembling the MSI GTX 960 Gamer G2 and replacing the thermal material with Artic Céramique 2. Once the new thermal compound was properly applied thermals decreased however I will not be taking those differences into consideration as the R9 285 was using it’s stock thermal solution.

I’ll give you the quick and dirty on overclocking.

Previous generations of overclocking were about feeding more power to the GPU, cooling had to be increased dramatically to sustain the OC. Current generations of GPU’s from both Nvidia and AMD feeding more power into the core and memory can actually be detrimental to overclocking. Nvidia and AMD both set strict Thermal Design Power (TDP) limitations on their GPU;s and if the thermals go to high the GPU simply start throttling and the increased power can cost you speed.

Jumping to the present just turn up the “Power Limit” or “Power Target”  crank up the fans/cooling then increase the core clock until you find the highest stable overclock. The current design also leads to some problems, you can reach max stable overclock but even then you have to monitor the thermal properties by keeping track of in game Core freqs, in game core Freq tanks you hit the thermal boundary and the GPU is throttling.

Once you reach the highest stable overclock with no additional power to the GPU core AND stable core speeds after gaming a while (say 20 minutes) then you can inch up the core voltage and increase core speed to see if it helps your overclock. Remember this whole time you must monitor the core frequency to make sure TDP limits aren’t tanking your OC.

Once you find the max speed with no power added, then bump the Core voltage and increase the Core clock and found your max GPU speed without throttling the core thermally then your at the Max OC.

You should take note that I follow that procedure for finding the max stable OC, but after the review I only use the Max OC without and added voltage. MSI will let you keep your warranty OCing AS LONG AS YOU USE the MSI Gaming APP. Here’s the quote direct from the MSI webby:

“MSI GAMING Graphics Cards give you more performance out of the box. Whether you use the card pre-overclocked or use the Gaming App to use its full potential, you can just get right into the game and enjoy sublime performance. Overclocking through the MSI Gaming App is covered by warranty to take away your worries. Get in there and start winning!” Source

Speaking of the MSi Gaming APP here’s a screenie of it.

There is always MSI Afterburner for manual overclocking: 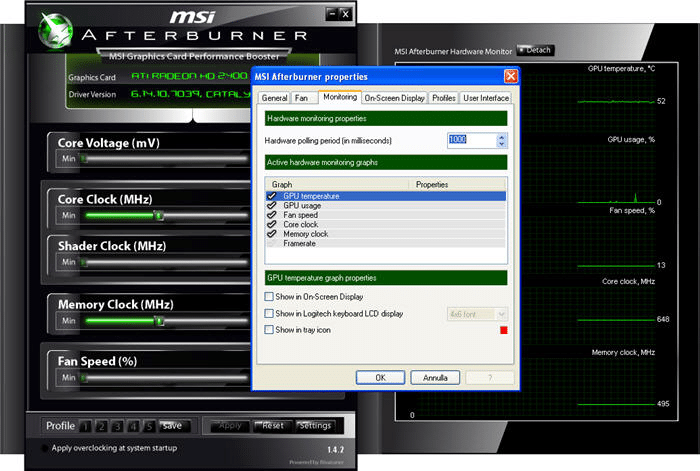 “MSI Afterburner is the world’s favorite cross-vendor GPU overclocking tool. The easy interface gives access to the most detailed information about your graphics card and allows for tinkering with pretty much anything available on your graphics card.

Compatible with 64-bit Apps, available in many languages, including, Russian, Spanish, Chinese and Korean and completely customizable with many user-generated skins, everyone feels at home. 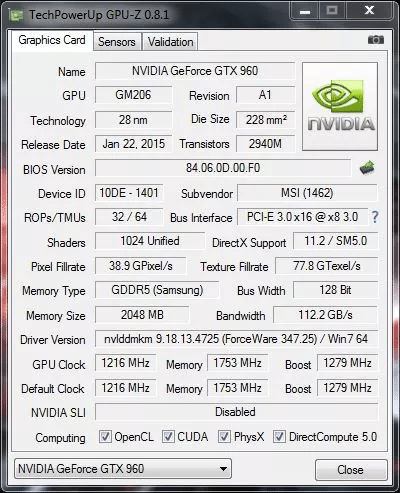 Here’s a shot of the stock speed in GPU-Z and you can see the advertised speeds are what it reports. 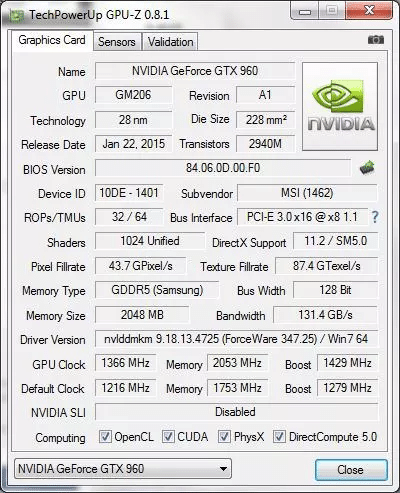 I got an amazing OC of 1366 a 150MHz increase, the boost speed hits 1429 and the memory speed increased 300MHz giving me a nice boost in some of the borderline gaming FPS cases. Quiet. cool and sips at power there’s a lot to like in the MSI GTX 960 Gamer G2.