Lets dispense with the words and jump straight into the good stuff! 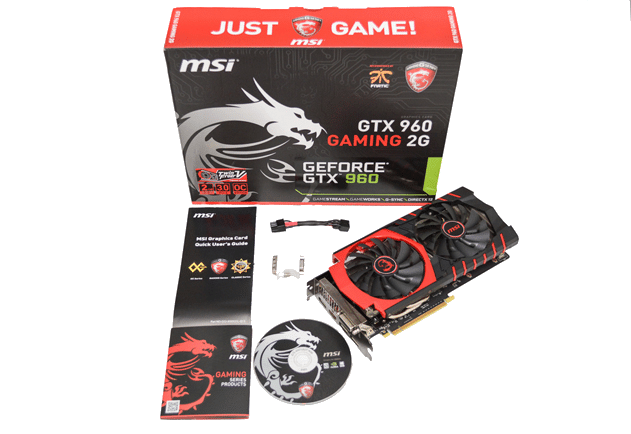 There’s not much in this modestly priced GPU bundle, the Box, the GPU, Driver/software disk, quick start guide and a PCIE Adapter cable extension. The adapter cable is a 6 pin PCIE to 8 pin PCIE and we also found a DVI to DSub adaptor but if you are using a DSub monitor with this card MSI will in fact send out a secret Monitor Ninja and Katana your DSub monitor in half (Just saying).

The 3 Display port, HDMI and DVI ports will cover almost any modern monitor made today.  Looking sharp the Torx fans cover the SuperSU heat pipes and when at an idle the fans stop completely. Link most enthusiast grade GPU’s we are looking at a double wide so plan expansion ports accordingly.

The Red and black cowling covers a host of technology including a new air flow control technology which pushes more air directly onto the heat pipes and it does so by using special defectors on the heat sink.

Peeking out from the cowling you get a glimpse of the SuperSU heat pipes. I would open this puppy up and redo the thermal material but that would void the warranty. Warranty who needs a stinkin warranty.

The MSI GTX 960 Gamer 2G isn’t nearly as sexy naked, the die is relatively small and I have to wonder why there is a HUGE bald spot a couple of components left of the GPU chip. Perhaps there will be a variant that utilizes that bare spot or maybe Nvidia needs to call the Bosley chip club to transplant in some capacitors.

There you get as unimpaired a picture of the SuperSU heat piping as your going to get without sawing into the cooler. The actual heatsink looks rather large and I’m sure that plays a part in the Zero Frozer  fans stopping when at an idle.  A larger heatsink will passively cool the GPU chip better.

Finally here’s a shot of the ports and heat exhaust, as promised earlier three Display Port, one DVI and one HDMI. We used to speculate on the demise of Display port but it looks almost like DVI is fading out of the picture, HDMI is holding on and Display port is giving them both stink eye and noogies.