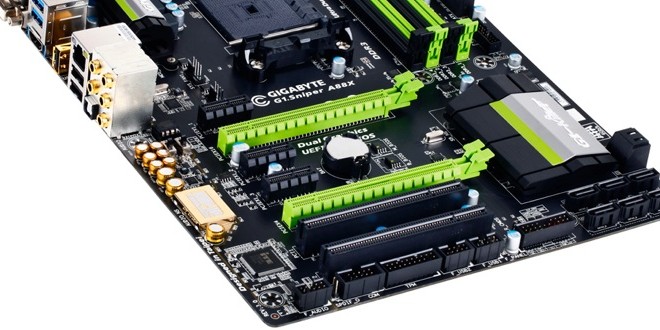 Unlike what we have seen with the Intel boards from Gigabyte, the BIOS on Gigabyte’s AMD line up has largely stayed the same visual as what we have seen with the first FM2 socket. Sometimes, changes are nice but Gigabyte’s 3D BIOS that the company launched in the past has some performance issue and does not offers as easy to use UI. So, the simplicity and the familiar text based BIOS is actually good because it is easy to navigate and the performance is speedy.

As usual, Gigabyte places the overclocking tools as the first tab under M.I.T. for the enthusiasts who are looking to tweak the system to get the best performance.  Here we can find all of the CPU frequency, memory setting, and the voltage settings available. To adjust these settings, you can use either the +/- or page up/page down on the keyboard or simply enter the value. The maximum value for the NB Block is 6000 MHz, for the graphics is 2000 MHz, and the CPU clock ratio is 79.

The board also supports Intel X.M.P memory profile and AMD Memory profile where if you purchase one of these memories, you are simple able to use the preset values without messing with each individual timings.  For those who wish to fine-tune the memory timings would be able to do so under the Advanced Memory Settings. The G1.Sniper A88X supports CPU Vcore, NB ore, DRAM voltage, Vcor loadline calibratoin and NBVID Loadline Calibration. The voltage adjustments feature two presets: Auto and Normal. Furthermore, you would be able to manually adjust the CPU and NB voltages in increments of 0.006V. The DRAM voltages can be increased in 0.01v increments or a specific value can be entered manually. Unlike the DRAM voltage, the CPU and NB voltages only support offset mode so you won’t be able to just enter a desired value. We would much prefer to have the option to simply enter a value instead of using the offset mode especially since the board does not display the current voltage on this page which made it even harder to know what value has been set (you can see it under PC Health Status).

Under Health Status is where we can find the system components’ temperature. Here is where we can also see the board’s fan control. The board offers three fan headers (one CPU and two system fan) where you are able to monitor the fan speed. Gigabyte lets you adjust the fan speed with a ratio of PWM to degree C or with the 3 presets (Silent, Normal, Full speed). When set to manual, it offers the ability to control the fan with  fan speed ranges from 0.75 PWM/C to 2.5 PWM/C in increments of 0.25 PWM/C. To have even further control over the fan speed, you would have to rely on the Gigabyte’s Easy Tune software in Windows to create your own custom fan  control curve.

The BIOS Features is where users would go to adjust the boot options. Here we have the ability to configure the boot option. Interestingly, the board comes with only two boot options. Our guess is that most people probably would only configure their system to boot from HD as Gigabyte reduced the numbers of boot options to two. This is perfectly fine with us and we like the simplification. Plus the board also features the ability o override the boot order during boot or in the BIOS so in the event you ever need to boot from other devices other than your primary OS drive, you would be able to use either one of the function for that. Here we also have the option to adjust the UEFI boot or Legacy boot mode for Windows.

The peripherals is where you would want to go to enable and disable various onboard controllers. Here is where we can also use to adjust the SATA configuration, USB ports, onboard LAN, HD audio, and the Super IO configuration. Also found in here is the option to enable the initial display from the integrated to the NB or the SB PCIe. In addtion, we can see the IOMMU support here.

Power Management is pretty standard where we have the option to enable the USB DAC power and the Audio LED. A neat feature that I always loved is the ability to power the PC on with the by keyboard or mouse can be configured here. Unfortunately, this only works with PS/2 keyboard and mouse.

Finally, Gigabyte’s BIOS features handy Q-Flash with the press of F8 where it will take you to a screen that allows you to flash the BIOS right inside the BIOS without the need of Windows installed. This is handy as you can just place the BIOS file on an USB drive and launch the application in the BIOS to proceed with the BIOS update. In addition, the support for the print screen is neat for those who need to share BIOS settings or for those who need to save settings as image before flashing the BIOS in the event that something went wrong and you had to reconfigure the system. 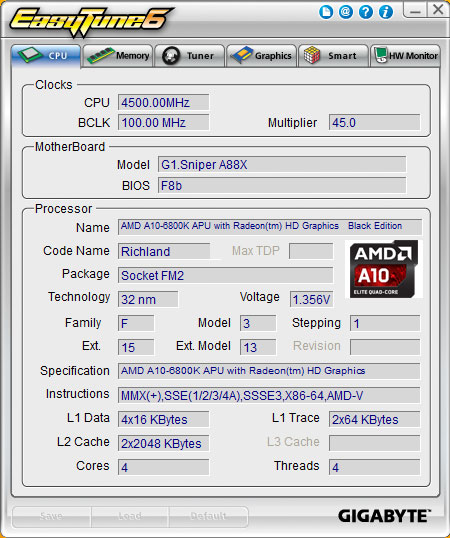 Overclocking with the G1.Sniper is extremely easy especially if you pair it with a processor with unlocked multiplier. We were able to overclock our A10-6800K to 4.5GHz in a matter of a few minutes by raising the multiplier and the CPU voltage. This is similar to what we were able to achieve from our past experience with our CPU with air cooler since getting higher clockspeed would need a water cooler.

A note before we look at the benchmark result. As the board is released before AMD releases the FM2+, aka Kaveri, you would probably need a BIOS update in order to get it to work with the Kaveri APU. Be warned though if you have an older BIOS, the Q-Flash BIOS update tool may not able to update the board to the latest BIOS without you first update it. We had to create a bootable USB flash drive in order to update the Q-Flash to the latest version and update our BIOS to the latest F8b revision. Luckily, you probably only need to this once as any subsequent BIOS release can be updated with the Q-Flash utility once it has been updated with Kaveri support. 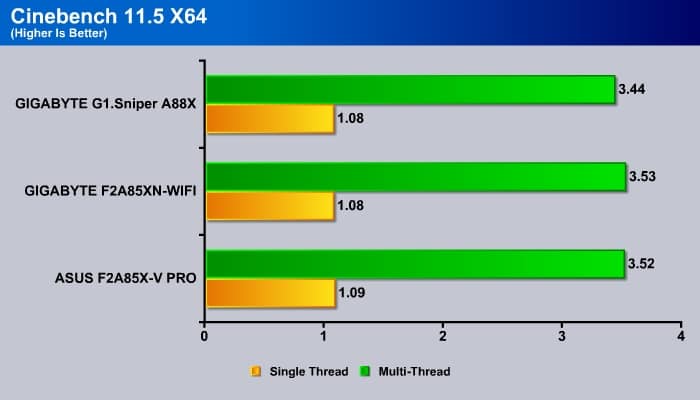 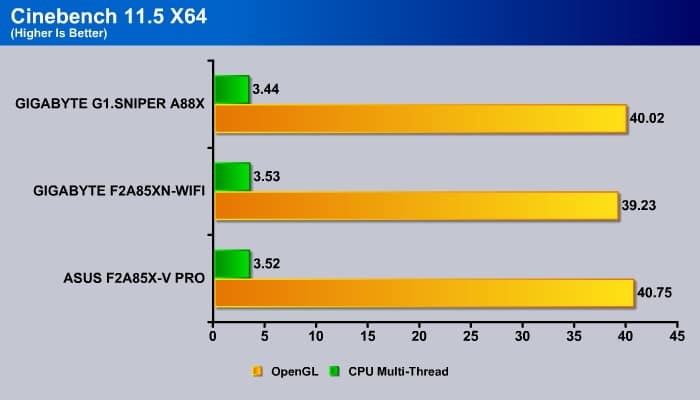 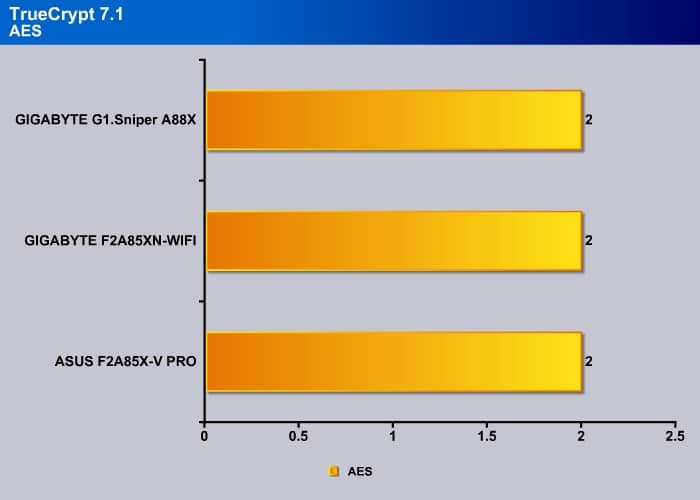 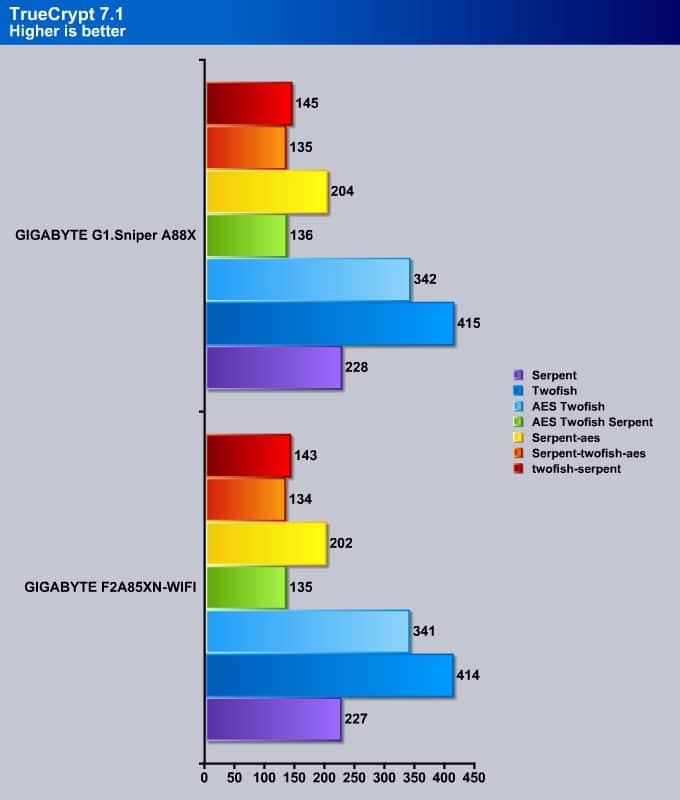 TrueCrypt is largely CPU bound task and here we can see that there is virtually no difference at all across the differnet chipset. In fact, the G1.Sniper A88X seems to be able to edge out extra point here and there over the A85X board. 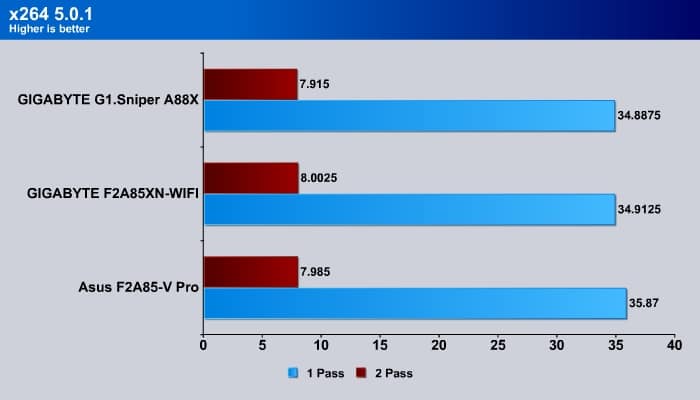 Transcoding is another task that is very CPU intensive task. Here, the G1.Sniper is just trailing behind the older A85 board just a tad. 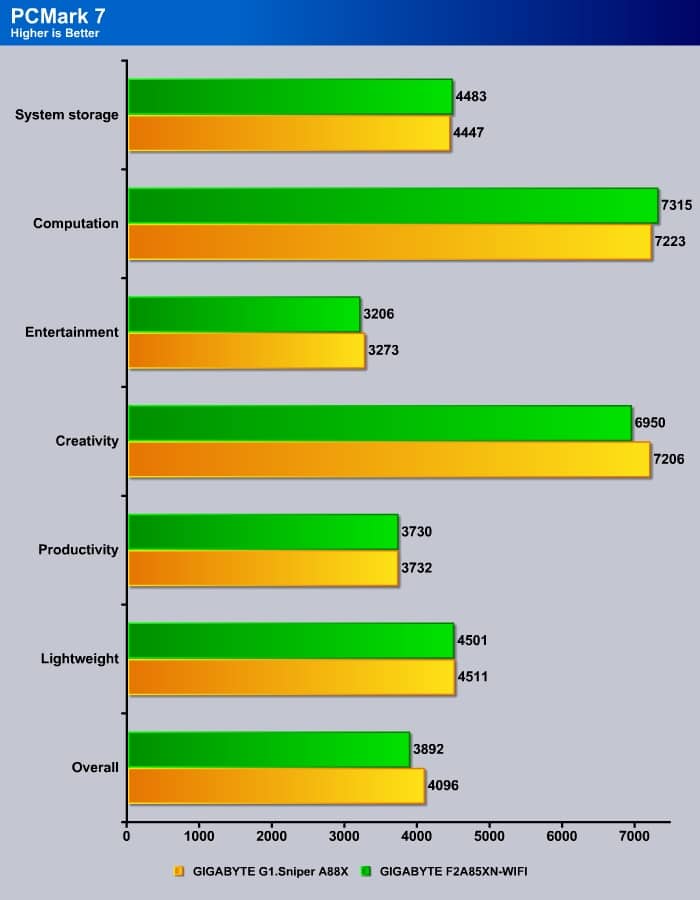 With PCMark, we can see that the G1.Sniper actually yields higher score almost across the board. Here, we can see that when the workload is CPU bound like lightweight and productivity, the there is virtually no difference across between the latest A88X board and the A85X board. The A88X seems to perform slightly better when the GPU workload is taking into consideration or that there is a mixture of CPU and GPU. 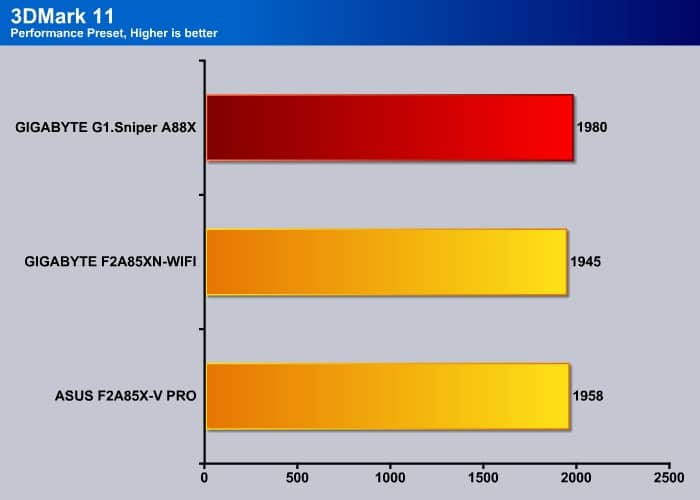 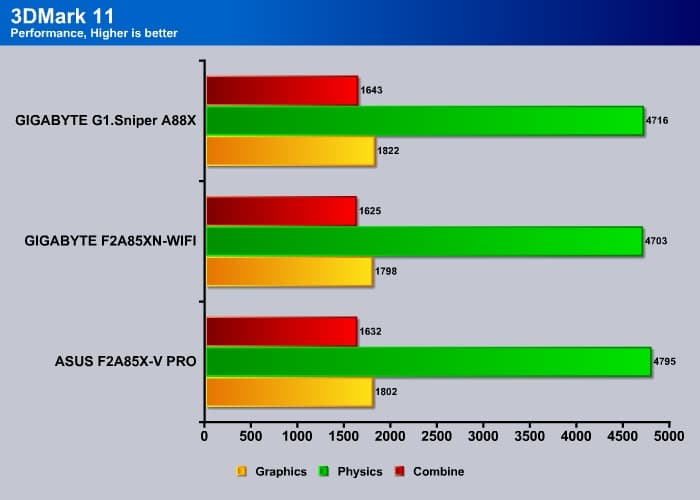 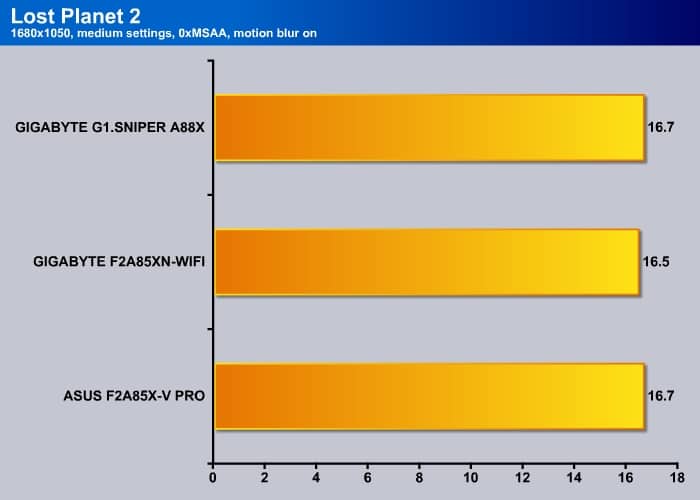 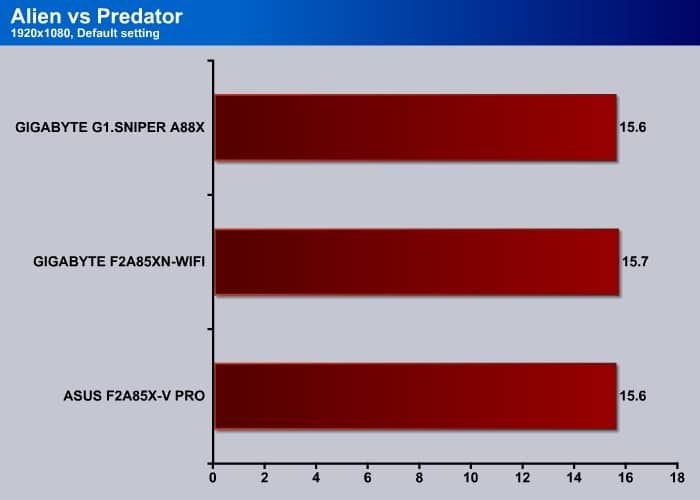 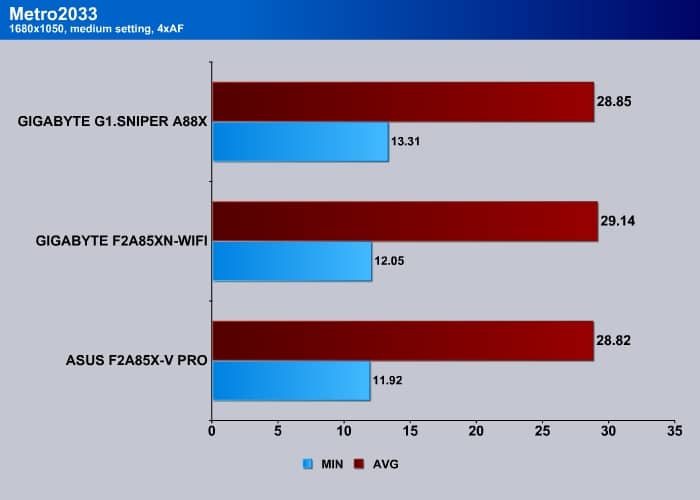 Gaming with the integrated GPU shows absolutely no different across the board which is expected. The real benefit with the A88X would be the support for PCIE 3.0 when paired with the Kaveri chip. So if you are looking to build a new PC, it is definitely worth spending a little bit extra for future-proofing.