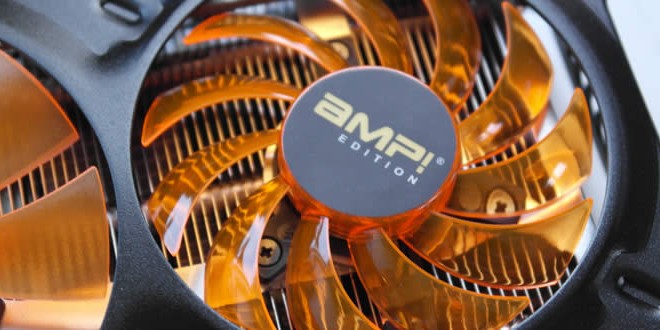 The OS we use is Windows 8.1 Pro 64bit with all patches and updates applied. We also use the latest drivers available for the motherboard and any devices attached to the computer. We do not disable background tasks or tweak the OS or system in any way. We turn off drive indexing and daily defragging. We also turn off Prefetch and Superfetch. This is not an attempt to produce bigger benchmark numbers. Drive indexing and defragging can interfere with testing and produce confusing numbers. If a test were to be run while a drive was being indexed or defragged, and then the same test was later run when these processes were off, the two results would be contradictory and erroneous. As we cannot control when defragging and indexing occur precisely enough to guarantee that they won’t interfere with testing, we opt to disable the features entirely. 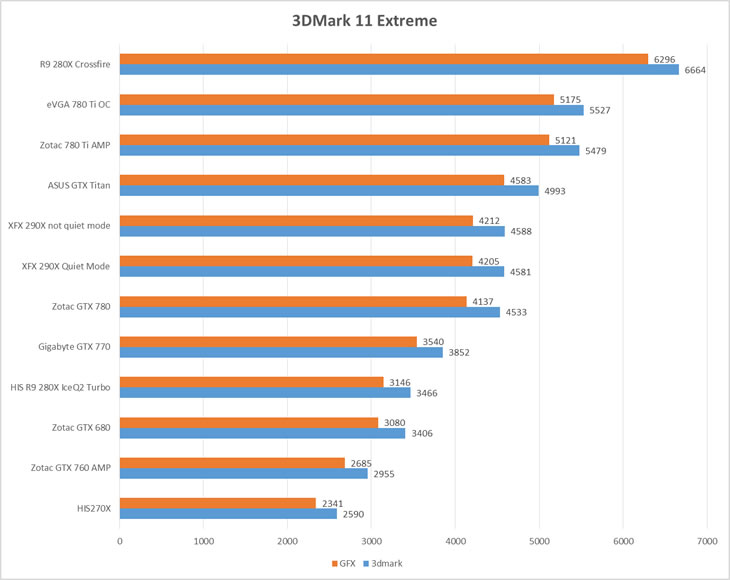 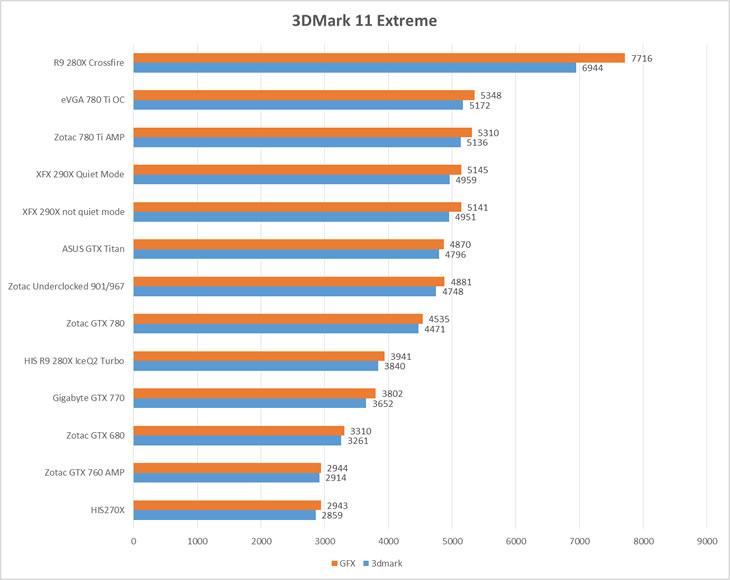 The Zotac 780 Ti AMP? Edition is together with the similary overclocked eVGA 780 Ti SOC the fastest single GPU card in these two synthetic tests. It easily passes the expensive GTX Titan. We did unfortunately not have a regular clocked GTX 780 Ti on hand so we underclocked this card as much as possible. From the result for the underclocked card we can deduct that the Zotac is about 10% faster than a regular GTX 780 Ti. 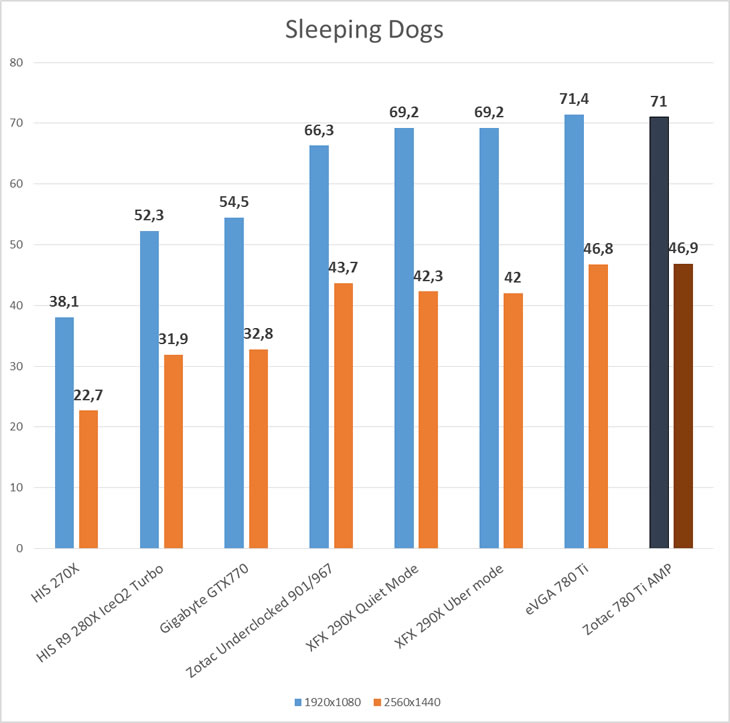 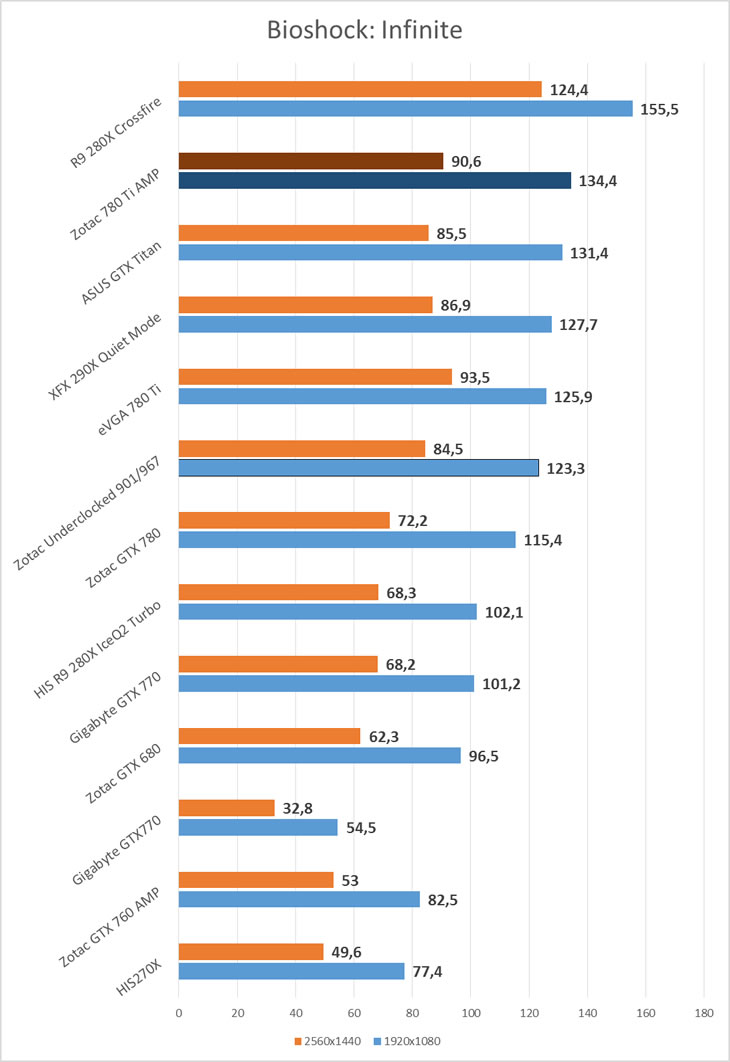 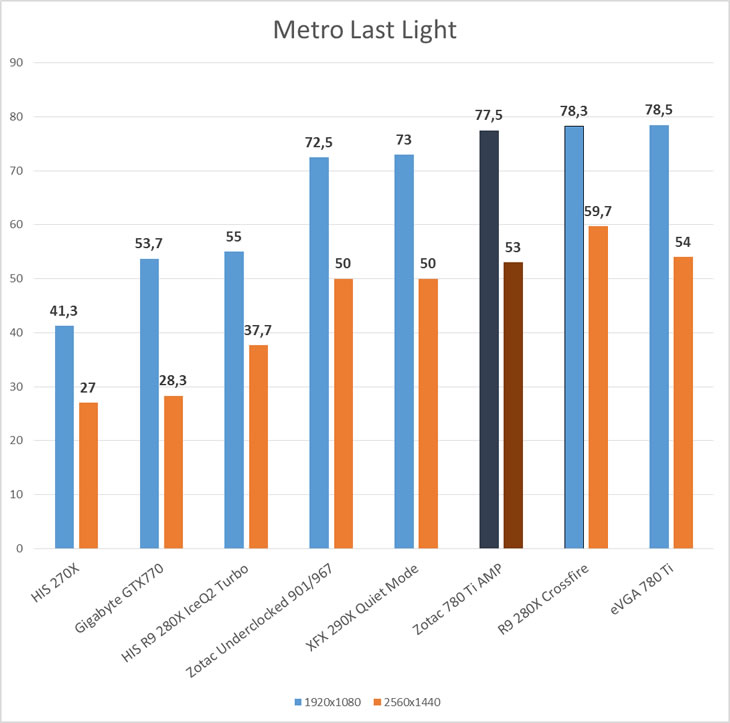 As we move to proper games the result is similar. In Bioshock: Infinite the Zotac GeForce GTX 780 Ti AMP Edition even beats out the GTX Titan. This card packs some serious punch!

Zotac includes a overclocking utility with the card called Firestorm. This gives us the same type of control over the card as for example the MSI Afterburner including the ability to affect the voltage. We used Zotacs own utility when trying to overclock this card. Any overclock had to run several benchmarks and burn-in tests before being accepted.

This is one freakingly overclockable card! It tooks some time to find a core-clock and memory clock to settle at. We did not mess with the voltage so there might be even more to get out of the card. So what was the final overclock? How about 1095 MHz for the core, 1161 MHz boost core clock and 7850 MHz for the memory! That is almost an 10% increase in both core and memory clock over the already overclocked settings of the card.

An overclock does not automatically mean you get the same percentage of better performance since framerates depend on many things. In the few tests we benched we see a increase in performance but not close to the 10% we expect.

This amount of performance usually comes with a price, either with a big power usage, high temperatures, lots of noise or all three. The TDP of the GeForce GTX 780 Ti is the same as the GTX 780 and the Titan: 250 Watt. We measured the power consumption at the wall for the whole system.

As we all know you do not need a 1200W PSU to run such a powerful card unless you have several. The fans also have no problems keeping the card cool. That also means we never have to worry hitting the 82 degrees that are the default limit before the card throttles down.

As for the noise the card has a soft sound (hard to explain) meaning that even when we push it very hard via MSI Combustor and the noise level rises to over 40 dB it still isn’t annoying. We have heard other fans that have a more sharper annoying sound even at lover sound levels.

Zotac definitely has done a good job with the fans on this card.