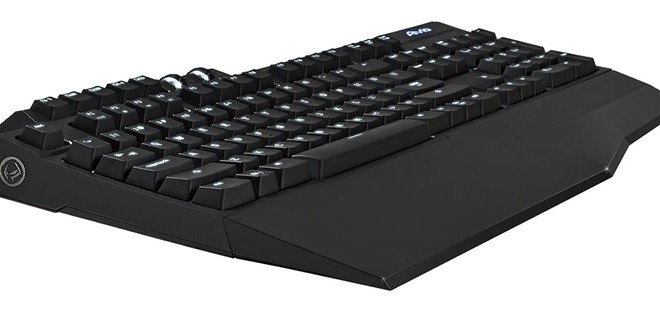 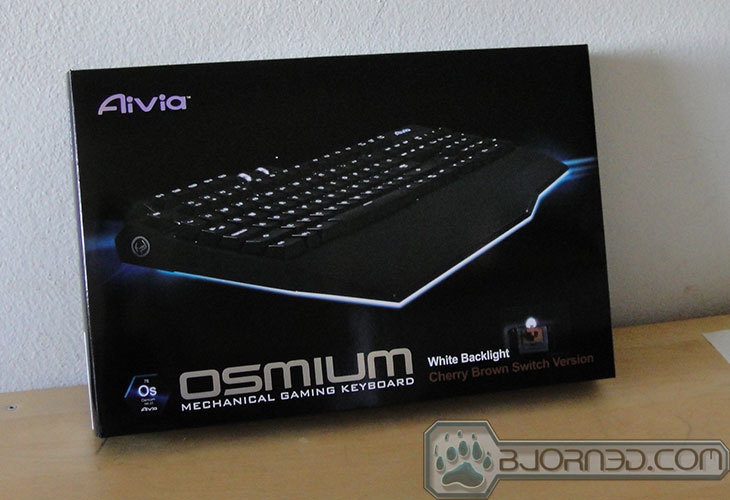 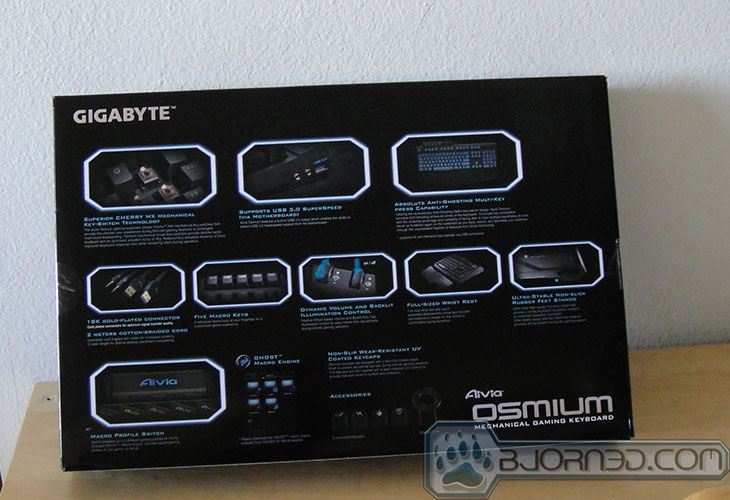 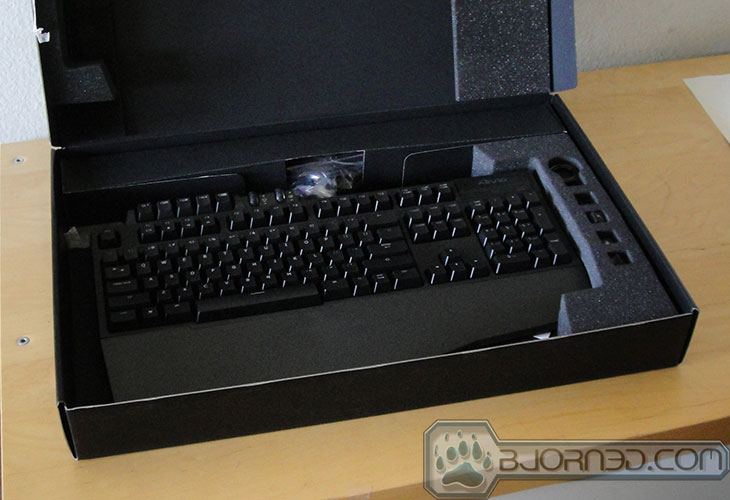 When Gigabyte first launched the Aivia Osmium keyboard, it came with the Cherry Red MX switch that we had reviewed a while back. While the linear feedback from the Red switch offers smooth feedback that is ideal for gaming, it may not be the best if you use the PC for more than just repeated tapping action in games. If you also use PC for typing, the Cherry Red MX maybe too sensitive. Or if you are not a fan of the Red MX switch, Gigabyte has released the Osmium with the Cherry Brown MX switch. The Brown switch, like the Red, has the same amount of actuation and bottom out force but also provides a better tactile feedback than the Red switch so it can be an ideal for both gaming and for typing. 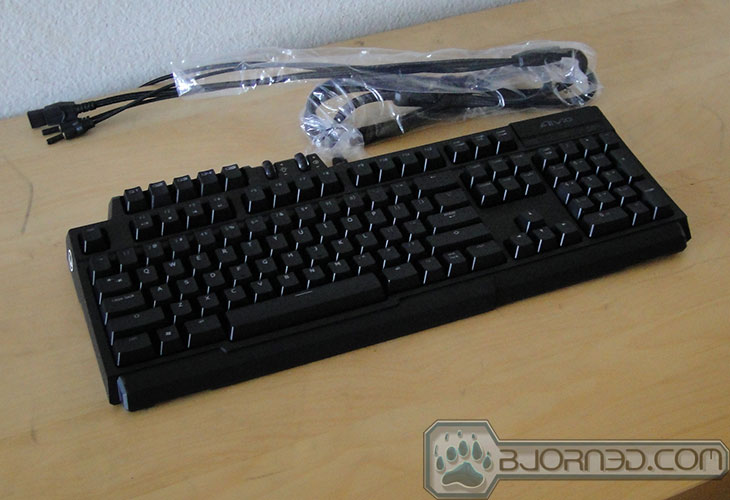 Externally, the Osmium with the Brown switch looks exactly like the keyboard with the Red switch. The overall design of the keyboards are identical with the dimension of 454(L)* 257(W)*45(H) mm and weighs 1500g. The keyboard is the standard 104 key design with the same larger backspace key that would be ideal for typing. It retained the same five Macro keys (G1~G5) located above the F1~F12 keys. The two wheel control are located next to the macro keys where one of them controls the backlit brightness and the other one is controls the volume. 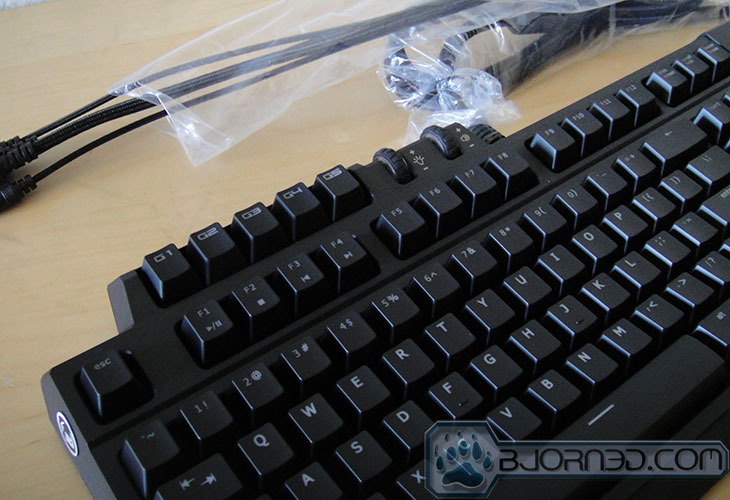 The volume and the brightness control has a rubber ring around it that provides a very nice surface as you turn the wheel up or down to The keys on the Osmium feels very smooth and does not attract much of the oil on our fingers I do enjoy the larger backspace key for typing. Unlike some of the cheaper keyboard where the key labels are taped to the key cap, the labels are directly build into each key cap. This prevents the labels from wearing out. Underneath each key is a dedicated LED light that lit up each individual key. The backlit intensity can be adjusted with the rubberized scroll wheel where turning the wheel up and down alters the brightness. The rubberized wheel provides a very nice feel and the wheel has a distinctive click for each intensity level. Pressing the wheel will also turn the backlit on and off. Unlike the Red switch keyboard that features blue LED backlit, the Brown switch model uses white backlit. Modders probably will prefer the blue LED for the extra personality but we actually like the white backlit as it made the letters much easier to read in a dark room.

One minor complaint that we have with the labelling of the keys. Often, we will find the primary character to be slightly larger than the secondary and it is often placed in the middle or the key cap with the secondary sits on the upper corner. The Osmium primary and secondary keys are not easily distinguished. They are equal in size with the primary key located on the left side and the secondary key on the right side. Since I never remember the position of the numerical keys and the special keys, I often had to look at the keyboard. There are a few times where I was left wondering which one to press.

Besides the macro keys, the keyboard has remapped the F1~F4 keys for media playback. To utilize these special keys, you would need to press the Fn key located next to the right Alt key in conjunction with the F1~F4 key. Personally, I prefer the Fn key to located on the left side of the keyboard and a way to lock the FN key so these keys are running as default. Sadly, there is no way to configure these keys for other functions or other keys with the included software. 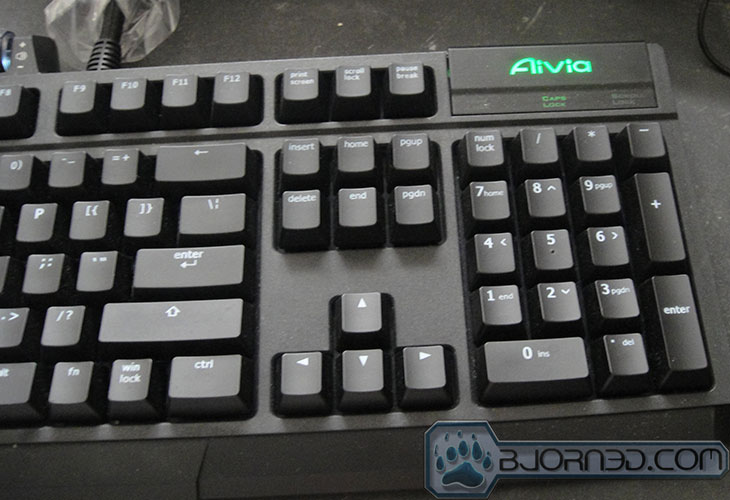 As the keyboard is designed for gamers in mind, it also features a Win Lock key, located on the right side of the keyboard between the FN and the right control key, to disable accidentally return to the desktop in the middle of the game. However, the keyboard lacks an indicator for the Win Lock so if you forgot to turn it back on after a game, you maybe wondering how come the Windows key is not working.

Moving toward the upper right corner of the keyboard and we will find Gigabyte implements the Macro profile switch in the same area as the CAP/NUM Lock/ Scrool Lock. A very nice idea. You can save up to five profiles. The upper right hand corner where the Aivia logo is located is a quick profile switcher that cycles through the five profiles as you press the button. The profiles are color coded that lights up the Aivia logo with variable intensity. Sadly, if you are not a fan of colors, there is no way to disable this. In addition, unlike the other keys, the intensity of the logo and the CAP/NUM Lock/Scroll lock are not adjustable so you would be left with rather bright light shinning through the keycaps. If you are sitting about 15 degrees vertical angle from the keyboard, the brightness can be rather annoying but at 30 degrees, it is not as piercing and bothersome. 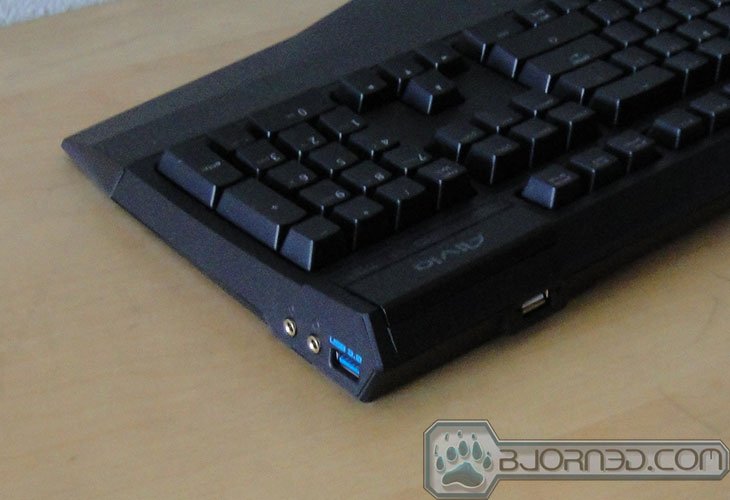 Rolling off the top edge an we will find a single USB 2.0 port and around it is one USB 3.0 port with the gold plated headphone and mic. For gamers, the integrated USB ports and headphone/mic on the keyboard provides the convenience of plug in the headset directly to the keyboard as oppose to the PC. You can also plug in the game controller or your mobile devices. We like the convenience. 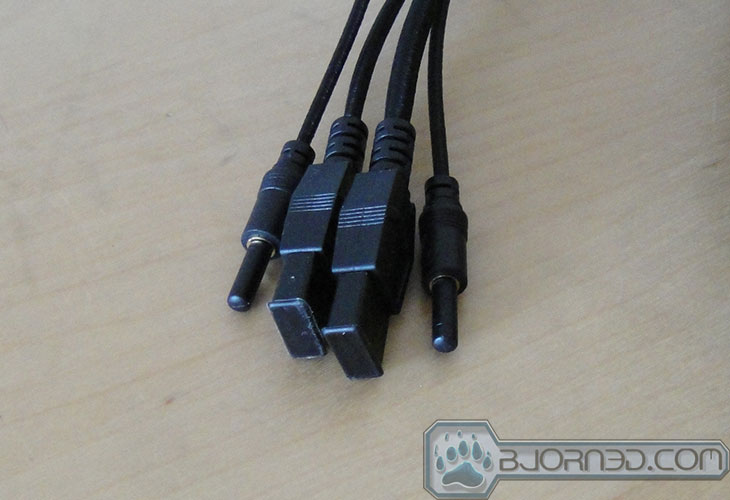 The keyboard comes with shielded cable that is quite long (~2 meters). The connectors are gold-platted and it comes with USB 2.0, USB 3.0, Mic, and headphone. While the keyboard still communicate with the host system via USB 2.0 speed, having the USB 3.0 is nice as you would get the benefit of the additional bandwidth if you plug in an external device like an USB 3.0 Flash drive or storage. We do, however, prefer if Gigabyte would simply use a single cable for the keyboard and all of the USB ports so that we can free up one USB port on our system. Though, having two dedicated cable does have its benefit where they keyboard gets all of the bandwidth to itself so it would not have to share with other devices (provides if there is nothing plug in the USB 2.0 port). 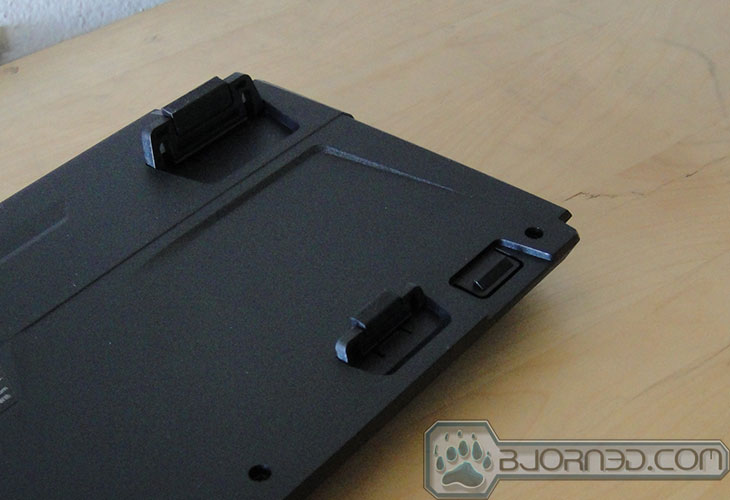 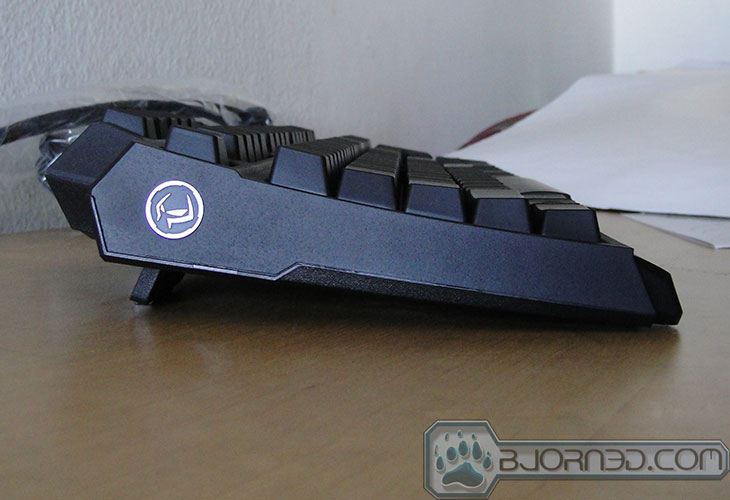 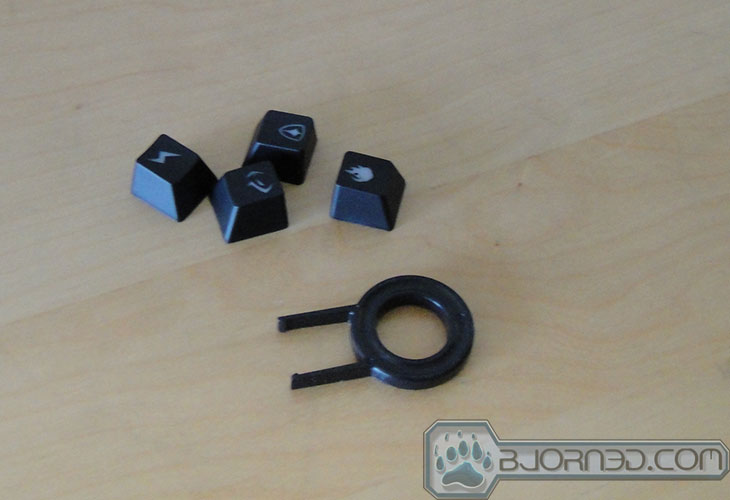 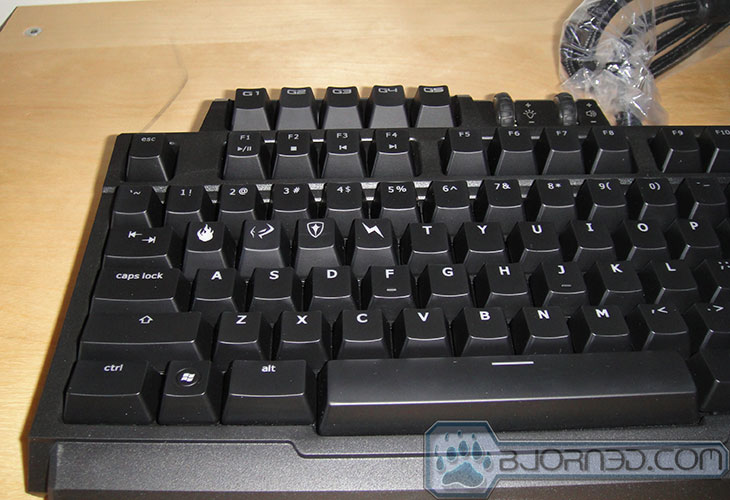 Another feature designed for gamers is the replaceable key cap. Gigabyte provides five keycaps that can be used to replace on any keys on the keyboard. Replacing the keycap is easy with the included tool to simply pull the key off the keyboard and then replace it with another one. The symbols on the keys appears to be more toward RPG games like War and Warcraft. 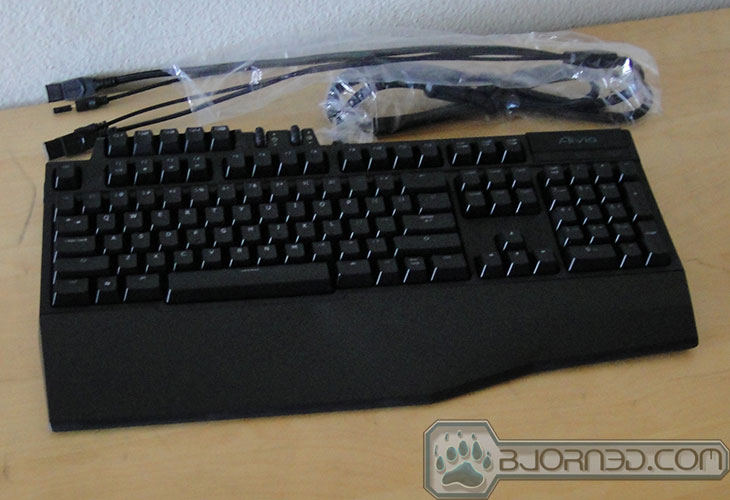 The palm rest that is provided is also quite large and it is detachable from the keyboard. 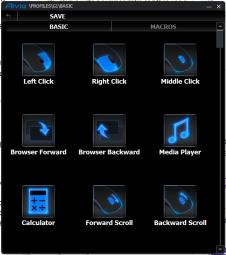 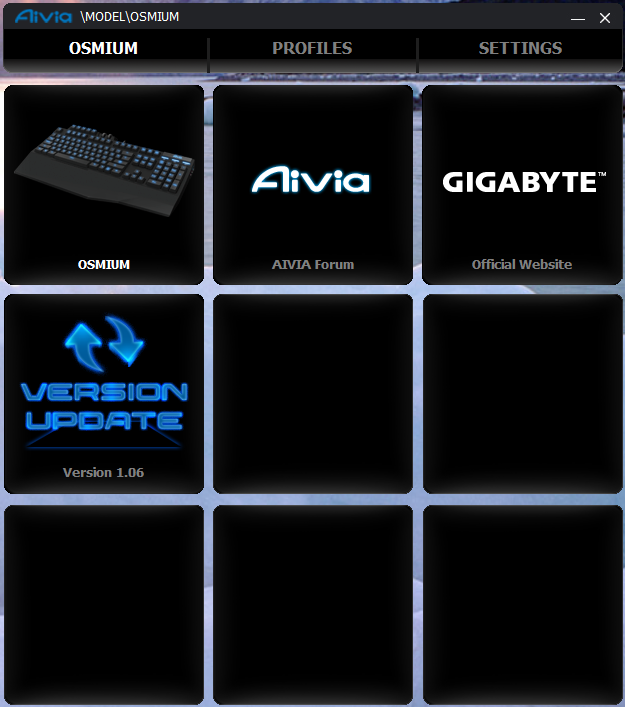 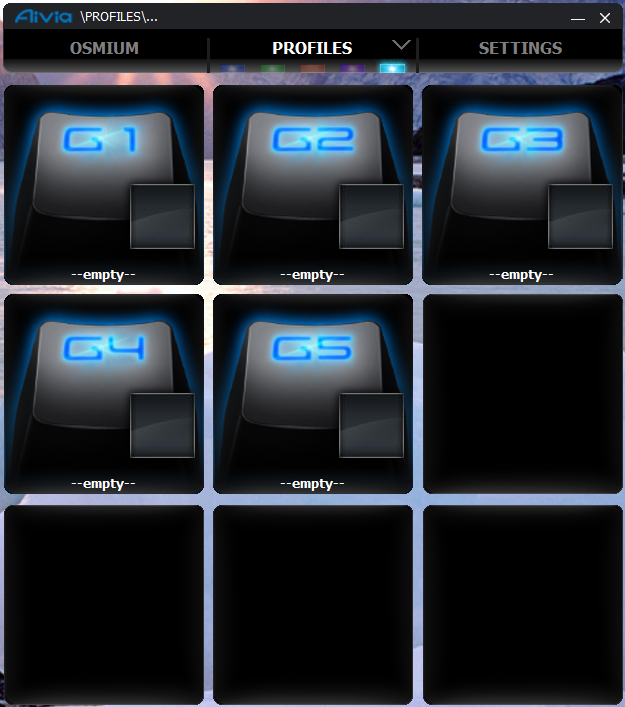 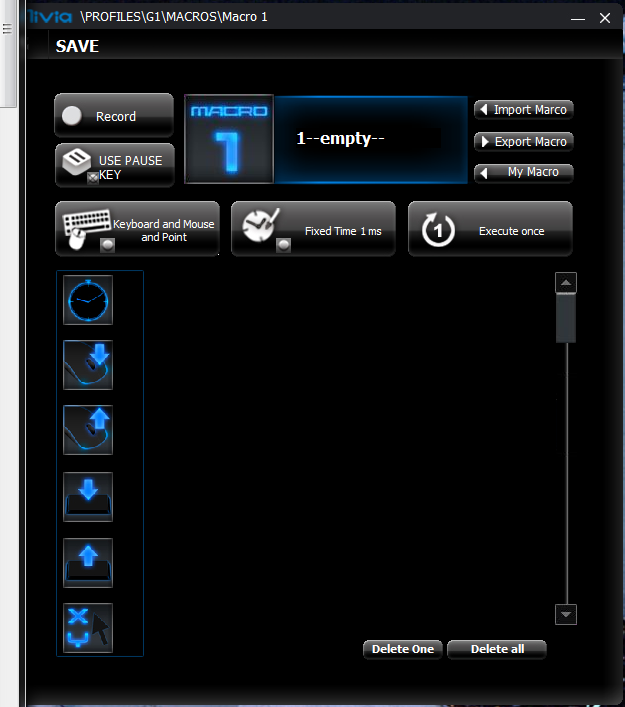 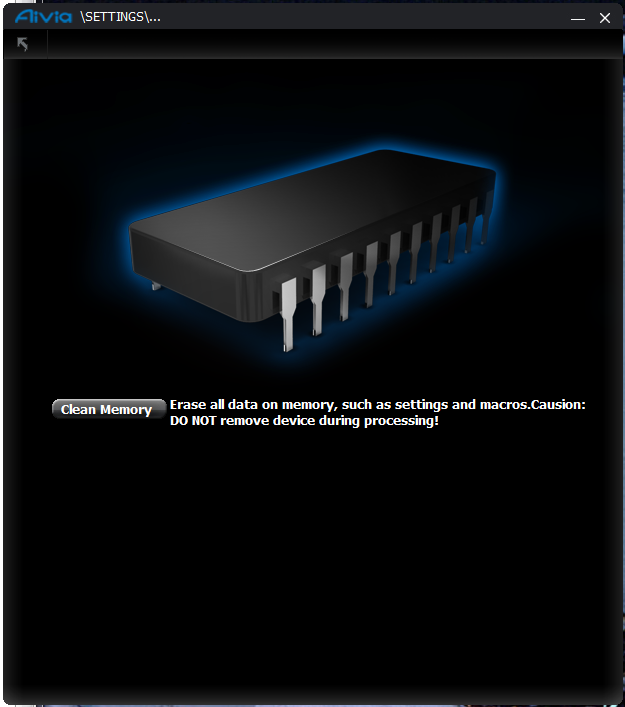 Gigabyte’s AIVIA branding carries peripherals that are designed specific for gamers. Along with that, many peripherals such as the mouse and keyboard features the same “Ghost” software utilities where gamers can use to adjust their peripherals. If you have one of the AIVIA peripheral like the Krypton mouse we reviewed, then you should be familiar with the Ghost software.

In addition, you would be able to assign the buttons to various Macros that includes the ability to delay time, left click, right click, specific key down, specific key up, and insert the pointer location. Assigning Macro is pretty simple task where you just drag the specified task over to the assigned window and follow the onscreen command to enter the specific value. We also have the ability to adjust the execution mode: once, fire, or loop. Alternatively, you can simply use the Record function to record the key combination.

To set to these functions, all you have to do is simply click on the key you want to assign (G1~G5), and click on the tasks from the list provided. Alternatively, to set to the Macro, you would just click on the Macro to configure the sequence of keystrokes. Save the assigned task and you are all set. Pretty easy to do. Though, we find the list of presets a bit messy and lacks the option to launch a specific program or common that sometimes is found on other keyboards.

While there are only five keys available for programming, the Osmium features five profiles. All together, you would be able to assign up to 25 combination of Macros and tasks on the keyboard. One thing we do appreciate with the keyboard is the ability clear memory with a single click. The Ghost software also offers the ability to import and export Macros so if you ever switch to a different keyboard, you would not have to reconfigure the Macros. Since the Macro are stored in the keyboard, you would be able to simply carry the keyboard with you and hook to any gaming PC and you are set to use all of your presets.

As a gaming keyboard, the Osmium works great. The keys are responsive and very sensitive for repeated inputs. The keys springs back very quickly and the weight of the keyboard keeps the keyboard in place even during repeated tapping. The position of the macro keys and the profile switch can be somewhat hard to reach. In addition since they are located in two corners of the keyboard, you would need two hand operation if you have more than five macros. We had no trouble using the anti-ghosting features and while the keyboard supports up to 64 keys, I doubt anyone would have that many fingers to test it.

When typing on the keyboard, we find it can be somewhat too sensitive. This is inherited in the Cherry Brown MX switch but if you are a quick typist and do a lot of typing or long document, you may find the keyboard a bit hard to use. You may have to find yourself to adjust the sensitivity by typing a bit slower or hit the keys with lighter force. On a few occasions, we found ourselves typing on a key and ended up register as double letters. However, after a few weeks of using the keyboard, I have gotten used to the keyboard and adjusting my typing habit of hitting the keys a bit lighter and not moving the fingers and hands as much as I used to. I still feel that I had to type a little bit slower than I used to with the older keyboard but since I am not using as much force as I used to, it does not get as tiresome as it used to.

Gigabyte Aivia Osmium Cherry Brown Mechanical Gaming Keyboard (GK-OSMIUM BRN) does double duty as a gaming keyboard that also can be good for typing. The board features tools that gamers need such as Macro, backlit, USB and headset pass-through.

Gigabyte Aivia Osmium Cherry Brown Mechanical Gaming Keyboard (GK-OSMIUM BRN) does double duty as a gaming keyboard that also can be good for typing. The board features tools that gamers need such as Macro, backlit, USB and headset pass-through.