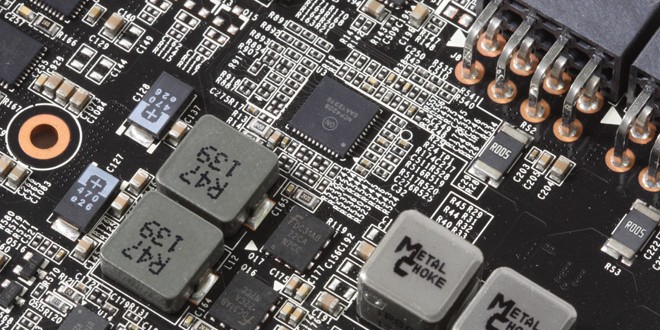 A Closer Look at the Gigabyte GTX 780 Windforce OC 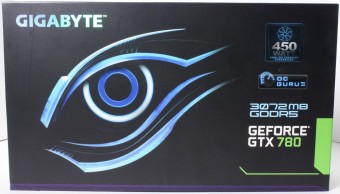 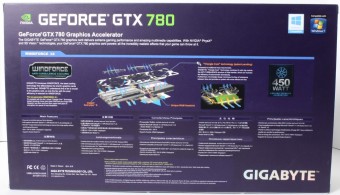 I must say the Gigabyte box for the 780 is pretty awesome looking primarily taken up with a robot looking eye which just gives it a slick feel and a overall new age tech feel compared to some designs I see. There is some marketing language on it but its pretty mild.

The rear of the box has some key technical and feature data along with a nice graphic showing the function of the Windforce cooler. 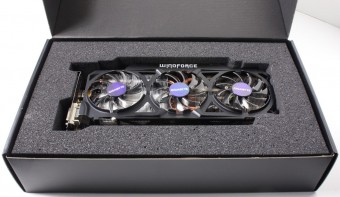 The GTX 780 Windforce OC comes internally in a black box and is well encapsulated in a semi rigid foam which should do a great job getting it to your door should you delivery driver decide to play soccer with it to your house, I know mine must do this alot with the condition of some packages I get.

The card when laid out is something to see, it does not have any flashy colors just a big card with a massive cooler. Triple fans are put to work to make sure that full 450W cooling capability is possible.

The rear of the card is found to be a bare PCB with no inclusion of a backplate but in reality I don’t care much whether a card has a backplate or not unless it serves a function. Since the card has no rear components I could see that need cooling and the design of the front cooler allows for stiffening of the PCB itself I see no major need for a backplate unless it was just for styling. I’m sure some will disagree but I look at function over form most of the time as unnecessary added parts can add to the end user price. 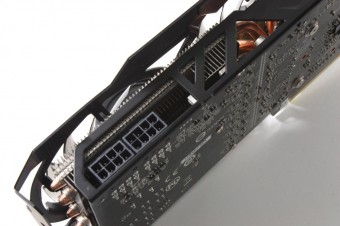 Here you see that the custom PCB GTX 780 Windforce OC offers dual 8 Pin PCIe connectors for some serious power capability, This allows for pretty much a maximum amount of power for the 780 card which normally comes in at a single 8 pin and a single 6 pin to feed the GPU so this extra capability should give some headroom to work with when overclocking the card.

The Dual SLI fingers are in place ready to run up to a 3 Way SLI configuration should you find a usage, game or benchmark for such a level of graphics power.

And here after popping the top we get a nice look at the stripped down cooler and the massive contact plate for the GPU. the array of heatpipes and fins get you a nice solid cooler which should be more than enough to keep this card cool even in the worst conditions.

the card as you can see when removing the cooler has a top bracket which helps to stiffen the card without the need for a full coverage backplate.

The cooler itself besides the copper GPU contact plate there is the surrounding aluminum block used for cooling the memory  and further down the line you will see another set of thermal pads which are used to cool the cards power circuits as well to keep the card running solid and stable. 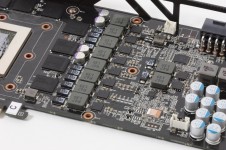 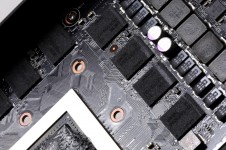 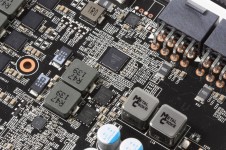 Taking a deeper dive into what makes the card tick you can see the full VRM which looks almost like the Nvidia design but slightly beefed up and also the power circuit controller which makes all of the magic happen.

The memory used on the 780 is Samsung model which is rated at 6GHz but as we have seen many of these modules can usually clock quite well giving clocks between 6500-over 7GHz!