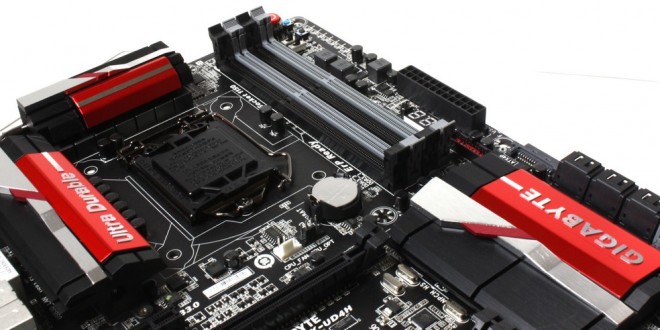 Overview of the Gigabyte Z87X-UD4H 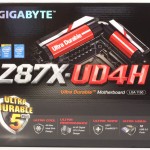 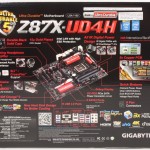 The packaging for the 8 series from gigabyte carries pretty much the same flavor as the 7 series which is not a bad thing as it usually carries a nice angle shot of the VRM/Heatsink. 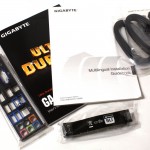 This bundle is very simple and will easily get you connected although we would like to have seen more SATA cables as having 8 SATA ports but only 4 cables means if you have a decent storage system you could be left searching for more cables. 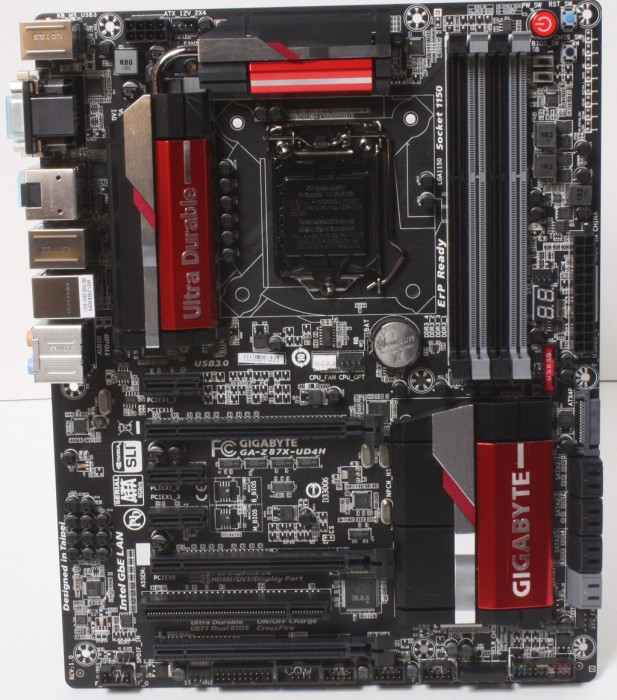 Here you can see the whole board layout, and straight away you can see that Gigabyte did a good job of ensuring connections are at boards edge allowing optimal cable routing and no cables needing to be run across the boards surface. The overall board is kept very dark even down to the black caps but there is a nice dose of shiny red anodizing to the heatsink which definitely adds to the appeal and is designed to service the growing demand and appeal to the Red/Black scheme we have seen taking large share of designs recently. 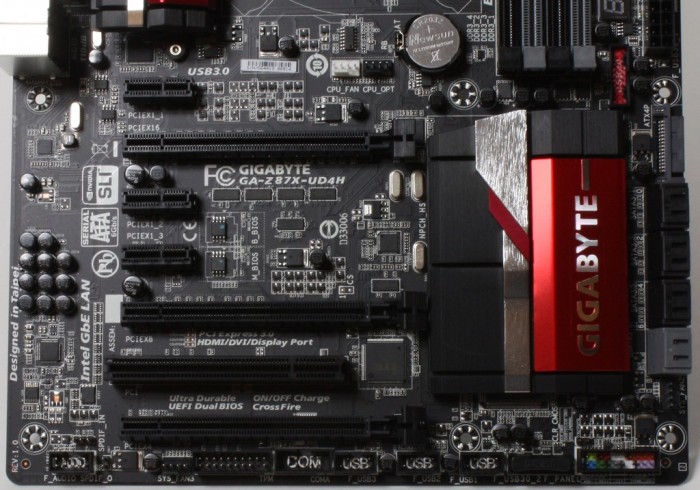 Click Image For a Larger One
Here you will notice that the slot layout is optimized for the dual card setups as it was designed. The triple slot spacing means that with triple slot cards you can run dual and with standard dual slot cards such as some of the top end Windforce series you can expect to fit them with a nice air gap for even better thermals..

The memory section is a dual channel 4 DIMM capable solution of up to a listed 32GB of officially supported capacity and speeds of up to and exceeding 3000MHz or 3GHz DIMM speed. This is very good and is possible via the new super strong Haswell memory controller, though do keep in mind that depending on DIMMs used and also strength of your specific IMC will be the ultimate deciding factor as to whether or not your system can actually run these speeds. 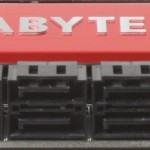 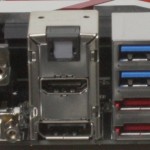 The drive connections are plentiful as the Z87 chipset offers up to six drives at SATA 6G Speed capability. The full six are employed here as the Black ports. The other two are a 3rd party controller from Marvell model 88SE9172 and support up to SATA6G speeds and even support RAID so if you wanted you can run a  mirror or striped 2dual drive array on this controller and would actually make for a nice little backup array for large data storage such as a RAID 1 set of large capacity platter drives. Also it is worth noting that there are eSATA ports on the rear IO panel and they share the controller with the grey ports so should you decide to use a eSATA device then you will lose ability of ports on the internal grey.
The rear IO is quite stuffed with many connectivity options:

The connectivity is vast and allows for connection of virtually any display without issue along with many SuperSpeed USB 3.0 ports to ensure no lack of high speed transfer. 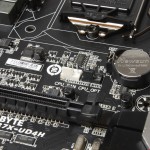 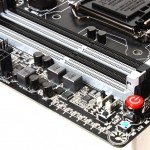 The “Overclockers corner” on the top right has onboard buttons to allow easy bench top usage and also dual switches for BIOS control from not just which BIOS chip to use but also enabling a “Single BIOS” Mode so that it will not inadvertently reflash the main BIOS via the dual BIOS function as so many users have seen before when Overclocking and having a couple bad post attempts. Unfortunately that happened to me before and reflashed a firmware that was not compatible with the chip we was using so you could imagine the headache with that, we do also like that the BIOS now requests flash of the second ROM when updating the main one so that if a cross flash ever happens your not flashing to an older image which may not support your hardware. 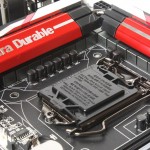 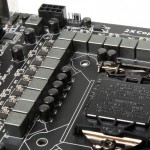 Click Image For a Larger One
Here you can see the main VRM which is quite nice fed by a single 8 pin CPU ATX connector and built from all IOR components.
The advantages to this configuration more than anything comes from the switch to digital control which as I said before allows for extreme accuracy and also control over the power circuits including voltage levels and output to the components. Also the efficiency of digital VRM has really been proven over time as it allows for much better power down of power phases to allow for less wasted power and heat generation by non loaded VRM components.