We have the 16GB (2x8GB) G.Skill RipjawsX DDR3-2133 (F3-2133C9D-16GXH) in our lab today, and we’re going to run it through the gauntlet. In addition to just doing a simple review of the RAM modules, we’ll also take the opportunity to examine performance differences against 4GB modules, and test how Core i7 3770K performance impacts on the memory frequency.

Today’s PC with its integrated memory controller means that memory speed has become less of a factor when comes to the overall system performance. DDR3-1600 seems to be the common memory speed in many PCs. This is probably due in part to the fact the pricing on the DDR3-1600 is relatively cheap and the current mainstream Intel Ivy Bridge processors officially support memory speeds up to 1600MHz.

This does not mean that having a faster speed memory will not offer you better performance. There are some tasks such as media encoding and video production which should still see some benefits with faster memory. Additionally, when it comes to overclocking, having a faster memory speed is important so that your CPU is not being bottlenecked.

With constantly changing trends in technology, we often wonder just how much additional performance current systems would gain with faster speed memory. Also, would 4GB be enough to handle most common desktop tasks and gaming? Or does the old adage “the more, the merrier” still hold true?

We have the 16GB (2x8GB) F3-2133C9D-16GXH G.Skill RipjawsX DDR3-2133 that we are going to put through some tests. We hope that this will shed some lights on the answers to the questions above.

G.Skill has become one of the prominent memory manufacturers with its array of products targeting different user segments. It features different lines of products such as RipjawsX, RipJawZ, Trident, and PIS. Within each line, G.Skill offers plenty of selection of memory modules at different frequency where it is easy to find one that will work best for your PC system. The main difference between the different product lines is primarily the heatsink that is used. In addition, the RipjawsX is designed and tested to work specifically with the second generation Intel Core processor processors for maximum compatibility and overclocking. The TridentX is the one of the fastest memory kits on the market today, and also in G.Skill’s line up where it carries the title of being the fastest 32GB DDR3 at 2800MHZ. 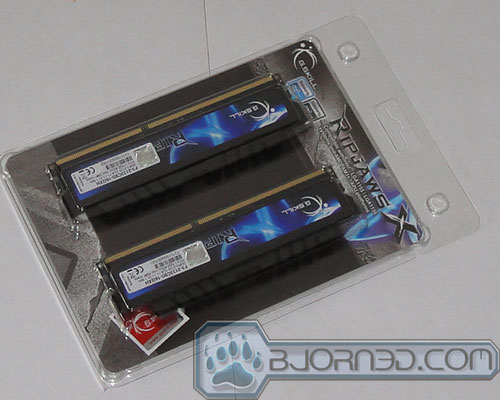 Our review sample RipjawsX F3-2133C9D-16GXH is more of a mainstream products for G.Skill. The RipjawsX is for those who want a fast memory with decent overclocking headroom but not wanting to spend too much money. It’s a performance kit that still gives you the best bang for your buck.

As you can see the RipjawsX is shipped in the typical clamshell plastic mold package. We get to see the memory modules with its model number and the timings without the need to open up the package.

Inside, we see the RipjawsX is shipped with a lovely G.Skill logo case badge with the slogan “go beyond limit.” 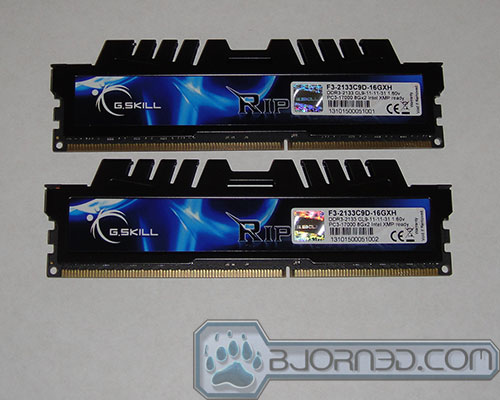 The memory modules carry the trademark RipjawsX aluminum heatsink. Our review sample features a black heatsink with blue stickers overlaying with G.Skill logo and the Ripjaws branding. The RipjawsX heatsink extends above the top of the memory module by about 1 cm which for most part should not cause any issue, even if you are using large heatsink that extends over the DIMM slots. Even with the growing trends of mini-ITX boards that sometimes do not follow the AMD or Intel board design guidelines, we do not think that the protrusion above the memory chip would pose much of an issue. 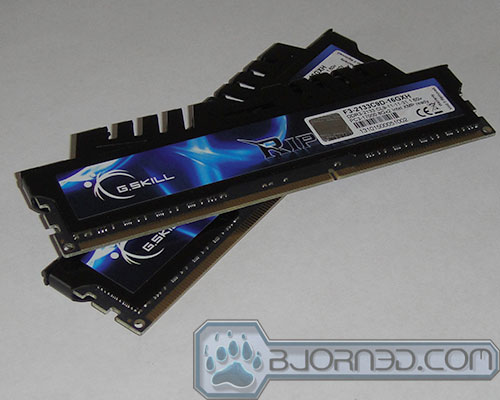 On the side of the heatsink we can see G.Skill print the frequency and the timing of the memory on the sticker. The memory we got here can run up to DDR3-2133 (PC3-17000) frequency and the timings of 9-11-11-31. What is neat about the RipjawsX is that it is able to achieve such speed at 1.60V. There is a trend in the industry to reduce the overall power consumption. We are happy to see that despite the fact that the memory module is running 2133MHz at slightly lower voltage than the commonly used 1.65V. What this means that there will be lower power consumption and heat output. In addition, it would be make the RAM more compatible with motherboards due to lower voltage requirement. 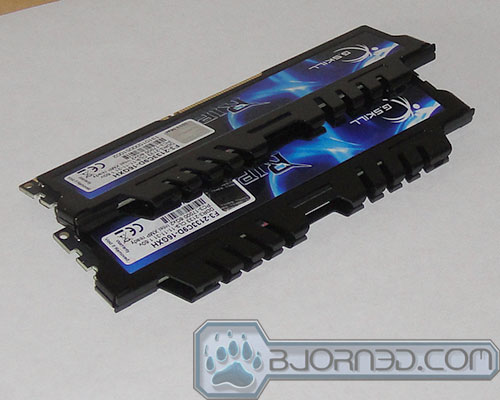 The memory supports Intel XMP (Extreme Memory Profiles) which means that it comes with the frequency and the timing embedded in the chip. To run the designated speed, all you have to do is go into the BIOS and select the XMP profile and it will automatically set to the right speed. We put the memory in our Gigabyte motherboard and were able to run the speed by simply select the XMP Profile in the BIOS. 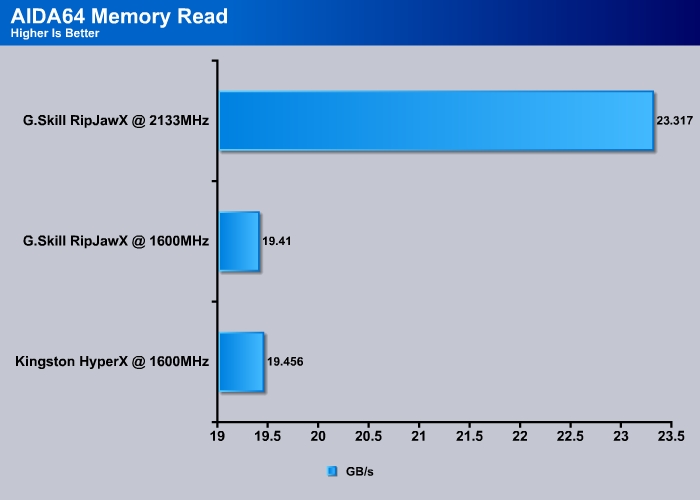 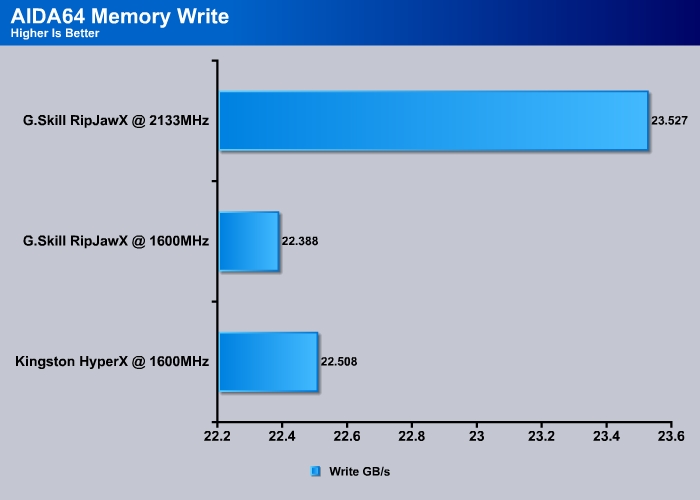 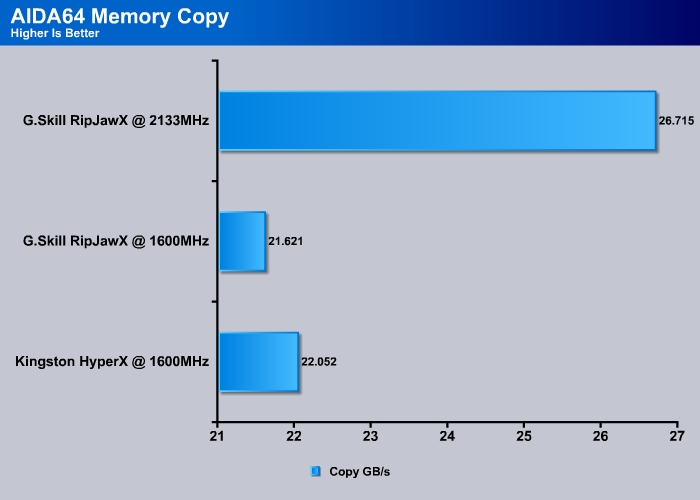 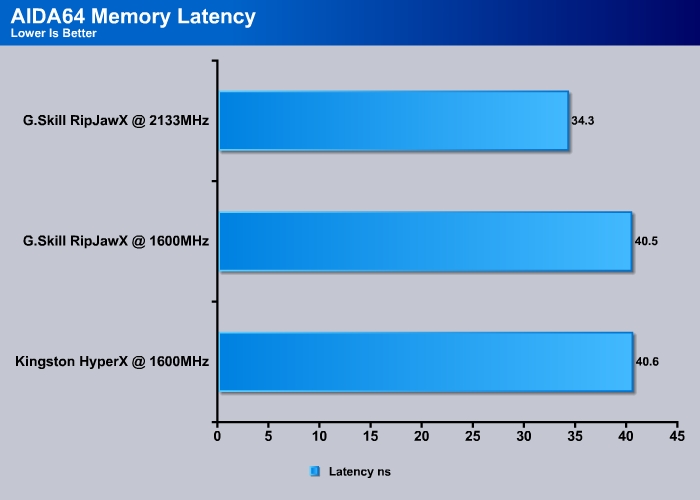 The memory copy also gets a healthy 20% bump in the performance and the memory latency gets a 15% in reduction. 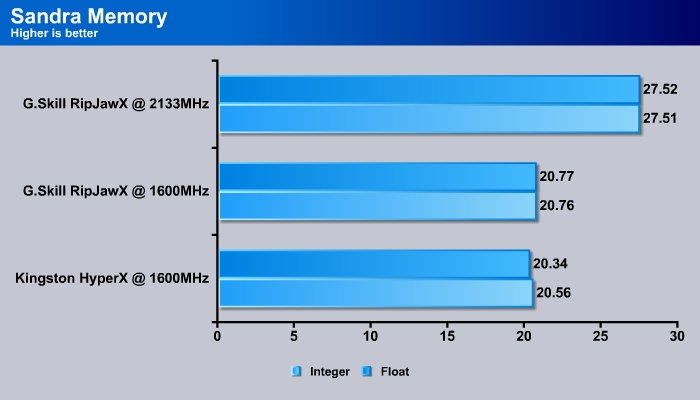 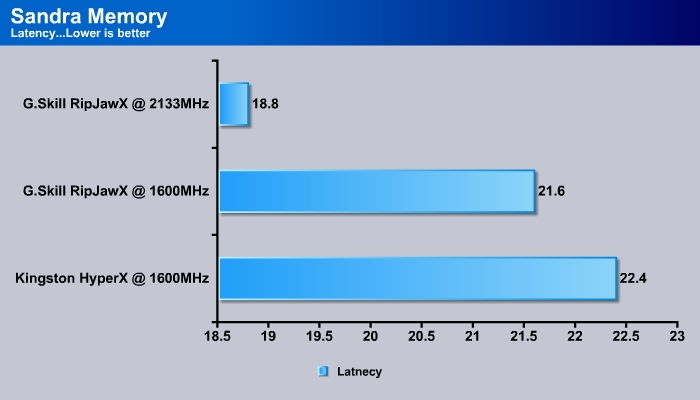 At the same frequency, the G.Skill and the Kingston perform almost identical with the G.Kill coming slightly ahead most likely due to its tighter timing in Sandra benchmark. AT 2133MHz, the RipjawsX shows 30% improvements, slightly higher than what we have seen with the AIDA64.

Again, thanks to the tighter timings, the RipjawsX is able to have slightly lower latency than the HyperX. Bumping the speed to 2133MHz further reduce the latency to 18.8, or 12%. 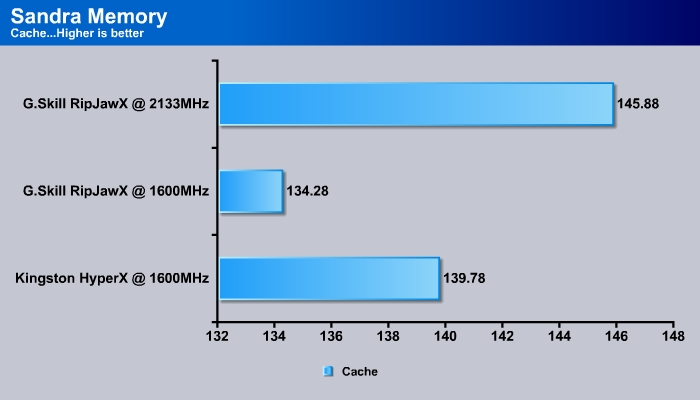 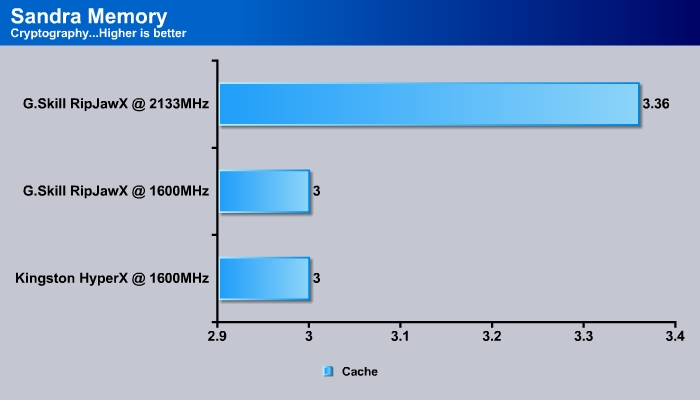 In the Sandra Memory Cache benchmark, the RipjawsX comes a tad short at 134 MB/s compare to the HyperX 139 MB/s. At higher speed, we get 8% gain.

We also ran the Cryptography benchmark in Sandra and we can see that at same frequency, there is virtually no difference between the two sets of RAM. At higher speed, we get about 10% improvements. 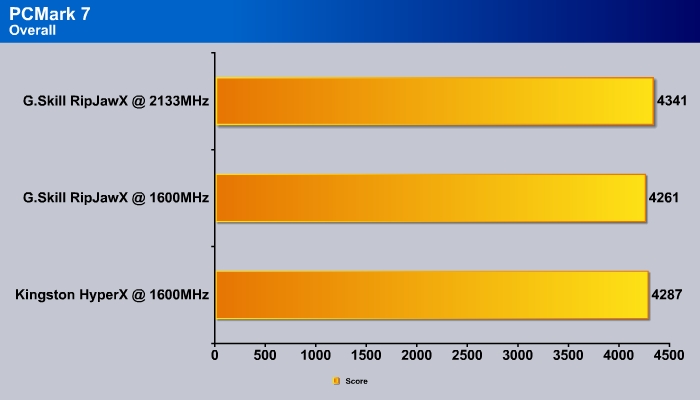 The overall score for the PCMark 7 shows that we gained about 2% improvement with the memory running at 2133MHz. 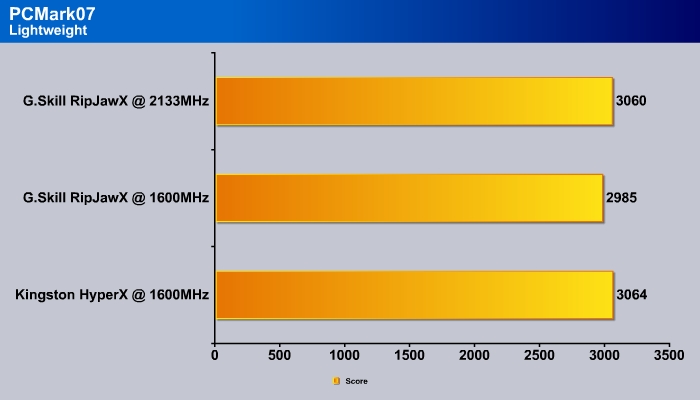 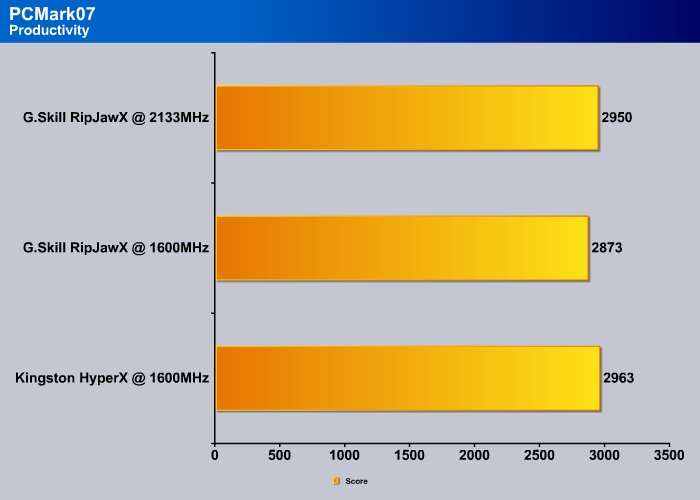 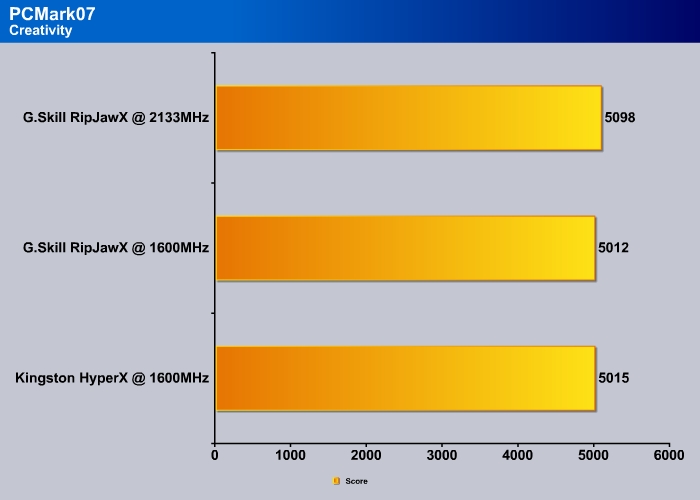 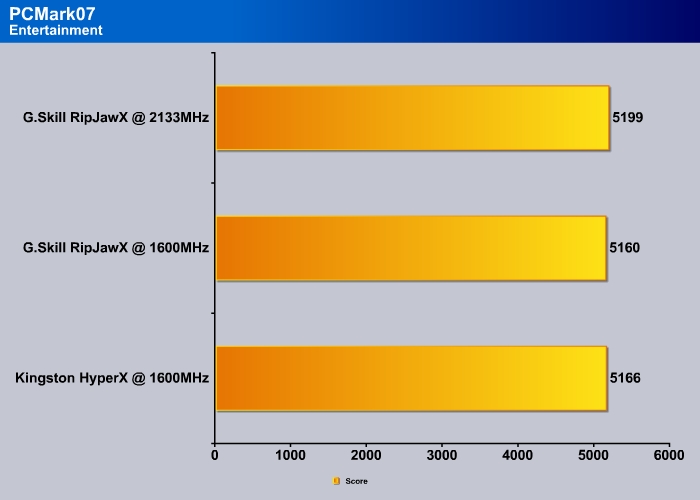 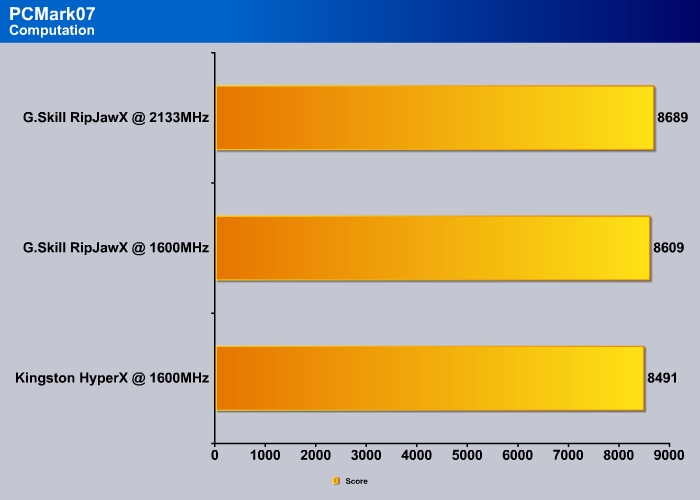 When we look at the individual score, we can see that when comes to memory frequency, the additional speed offers a 1-2% improvement. We see a greater improvement in mixed workloads such as the Lightweight and Productivity tests.

PCMark is designed to mimic how an average user uses their computer. Based on the result we see here we can see that for an average user that do not particularly doing anything intensive like browsing web, typing documents, light gaming, and multimedia playback on their PC, 4GB should be sufficient for most parts. Going with 16Gb is a bit overkill and it does not offer much additional performance except where in the Computation benchmark where we see slight benefit from the added RAM. Obvious, if you are using the PC for more demanding task such as video production, imaging editing, and data processing, the additional RAM is definitely a good idea especially considering just how cheap they are. 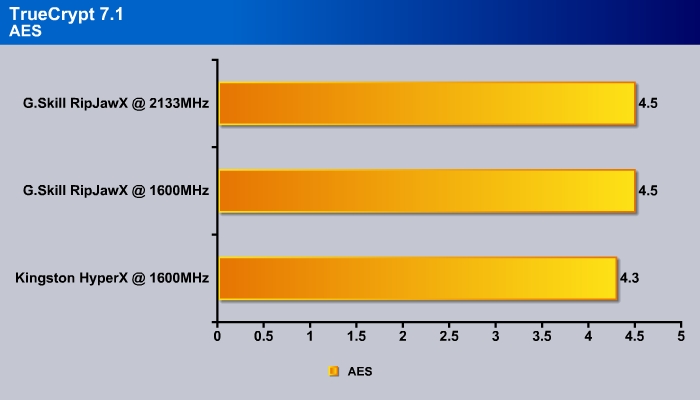 While PCMark is a synthetic benchmark, TrueCrypt is a real-world application. Here we can see that despite the fact the additional memory frequency does not offer any performance improvements, the extra memory does gives us 4.6% boost. 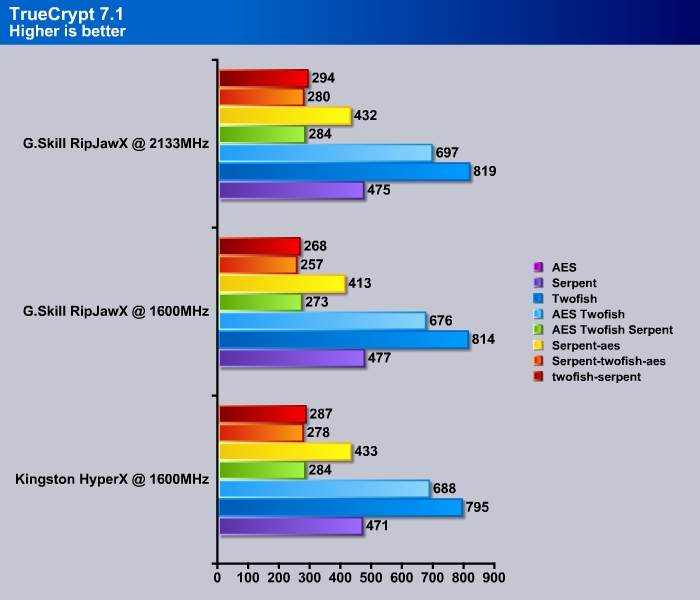 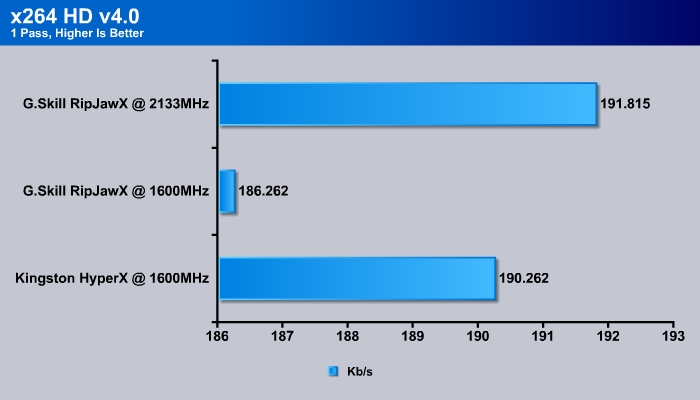 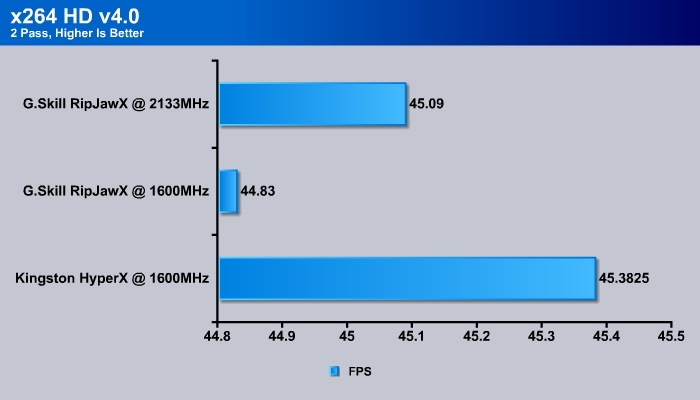 The single pass in the x264 seems to favor the RAM but the the two-pass test seems to be less memory dependent. Despite what you see on the charts above, the difference between the RAM at various speeds and capacities is rather small, approximately 2% at most. 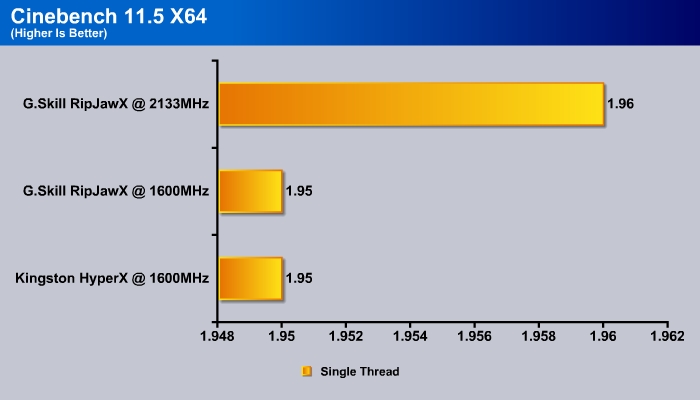 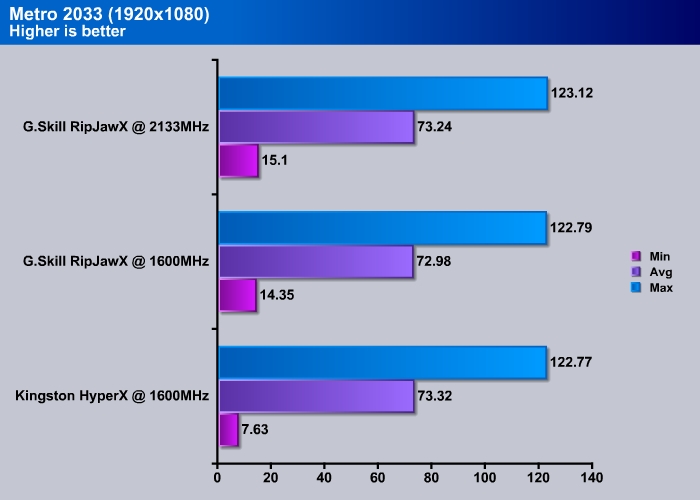 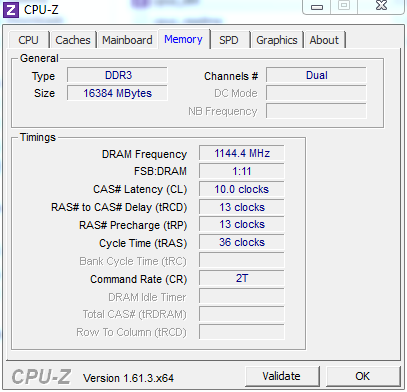 At the Intel recommended 1.65V, we were able to get the memory to run stable at the next divider of 22x (2200MHz), but were not able to push it to the 2400 MHz. We raised the BCLK a little bit and were able to push the RAM to 2288 MHz. The memory does not leave much room for overclocking but as we have seen the extra frequency really is not going to make a drastic difference in terms of performance.

Getting the G.Skill RipJawsX F3-2133C9D-16GXH to run at its rated speed is extremely easy with the XMP Profile. We like that the memory modules are able to operate at 2133MHz with good timing a 1.60 V since many 16GB DDR3 running at 2000+ MHz require 1.65v. We liked that this kit was able to deliver the same performance at a lower voltage. Not only do lower voltage mean lower power consumption and heat-output, they also offer greater compatibility for users whose motherboards offer limited memory voltage adjustments.

G.Skill priced these RAM kits at a competitive price point and backed them with Limited Lifetime Warranty. There is not much you can ask for if you are in the market for 16GB of memory.