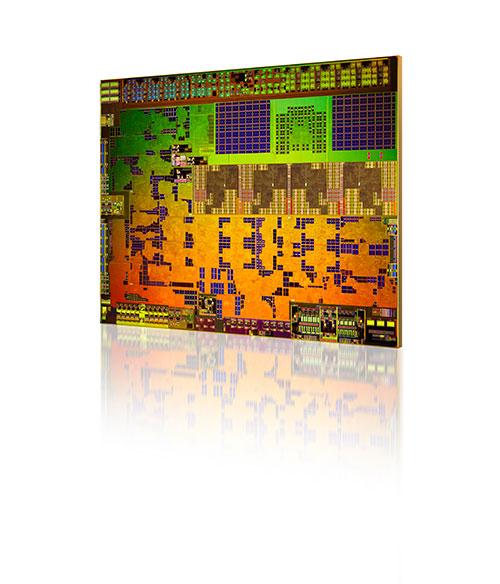 AMD has officially released its entire mobile platform for the year 2013. Today the company released the Kabini SoC for the ultrathin notebooks and the Temash SoC for tablets. Built on the 28nm process, Temash and the Kabini are expected to deliver up to 20% better CPU performance, 75% GPU performance and longer battery life.

Back in January at CES 2013, AMD unveiled the company’s product line up for 2013. AMD’s entire APU line up will get a big upgrade this year. We have already seen the mobile Richland appeared on the market. The next wave of products from AMD will be the “Kabini” and the “Temash” lineups. While the “Richland” line is targeted toward high-performance desktops and laptops, Kabini and  Temash are going to be for what AMD calls the “convergence form-factors.” 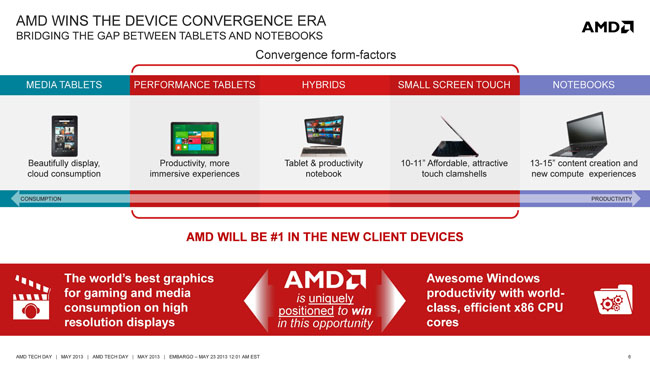 Today’s computing devices are different than what it was a few years ago. Now, people are shifting toward portable devices like tablets and ultraportable laptops as opposed to larger devices. AMD groups these small, portable, convertible, and hybrid devices into the convergence form factors. AMD believe that their APUs can deliver a good performance due to its stronger integrated GPU that can bring better multimedia and gaming experience.

What is interesting with Kabini and Temash is that both APUs are built on the 28nm from TSMC that marked the first x86 System-on-Chip (SoC) from AMD. For those who may not know, an SoC integrates all of the components in a computer into a single chip. Previously, any PC requires multiple chips such as CPU, GPU, Northbridge, and Southbridge for it to function. With an SoC, AMD has integrated all of these components into a single chip.

The CPU side of the Kabini and the Temash is based on the Jaguar core. The APUs will come in either two or four core version. The Jaguar core is still still based on the same K10.5 microarchitecture, not the latest Piledriver/Bulldozer core found on the Trinity APUs. However, the Jaguar core is packed with new instruction sets (ISA) that includes SSE4.1, SSE4.2, AVX, AES, CUMUL, MOVBE, BM1, and F16C. It also has improved instruction Cache prefetcher for higher IPC and adds 2MB of shared L2 cache (as oppose to 512KB per core). Additionally, it adds hardware integer divider, 128-bit floating point unit and 40-bit physical address capability. All together, AMD estimates the new APU should offer greater than 20% improvement over “Bobcat”. 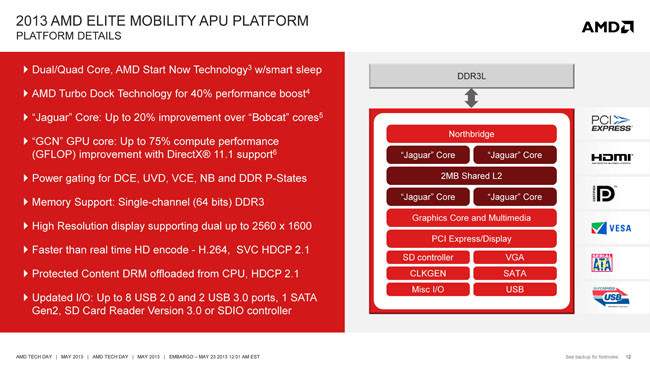 While there is no major architectural change on the CPU, the GPU on Kabini and Temash has gotten a major update to the latest Graphic Core Next (GCN) microarchitecture. It means that the GPU will come with all of the latest features such as DirectX 11.1. More importantly, GCN brings greater support for the GPU compute which would result more programs that can be accelerated by the GPU, which will further help AMD. The GPU on the APUs will carry the HD 8000 branding like the rest of 2013 AMD APU line up and according to AMD, it can deliver up to 75% compute performance over the GPU found on the previous gen. The Kabini and Temash chips have 128 Radeon cores with clockspeeds up to 600MHz for the highest model and supports resolution up to 2560×1600.

For memory support, single-channel DDR3 memory is supported with clockspeed  up to 1600 MHz depending on the APU. The low voltage DDR3 is also supported. The APU also supports up to 10 USB 2.0, up to two USB 3.0, one SATA 3Gbps, SD Card reader version 3.0 or SDIO controller. 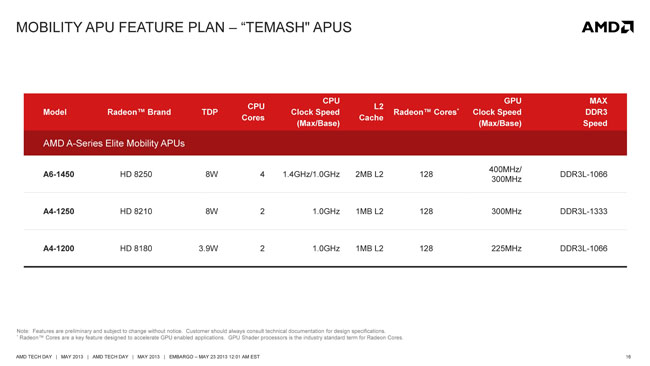 Kabini will replace the Brazos 2.0 APUs and target at the Ultrathin notebooks. The Temash is replacing the Hondo APUs and aimed at the Tablets, the Hybrids, and the notebooks with screen size less than 13”. Today, AMD launched three A-series Temash APUs. The top of the line A6-1450 is a four cores model clocked at 1.0GHz (Turbo to 1.4GHz) at rated TDP of 8W. The two lower end models are both dual-core version clocked at 1.0 GHz where the A4-1250 is 9W and the A4-1200 is 3.9W. 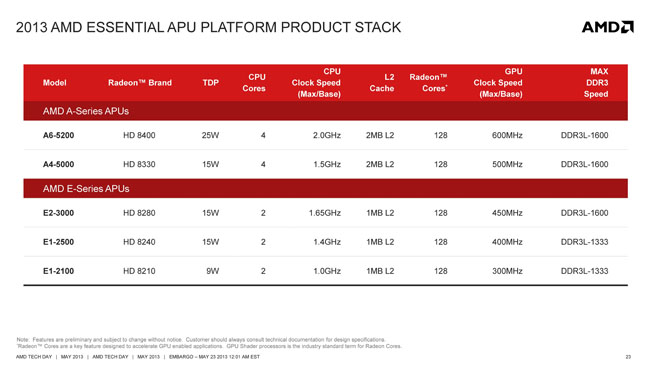 Five new APUs are for the Ultrathin notebooks are released today with TDP of 25W, 15W and 9W. Two quad-cores, the A6-5200 and the A6-5000, are clocked at 2.0GHz CPU/600MHz GPU and 1.5 GHz CPU/500MHz GPU respectively. The three remaining models are all dual-cores and will carry the E Series branding with clockspeed of  1.65GHz, 1.4GHz, and 1.0GHz. AMD positions these APUs against the Intel Core i3, Pentium, and Celeron processors. 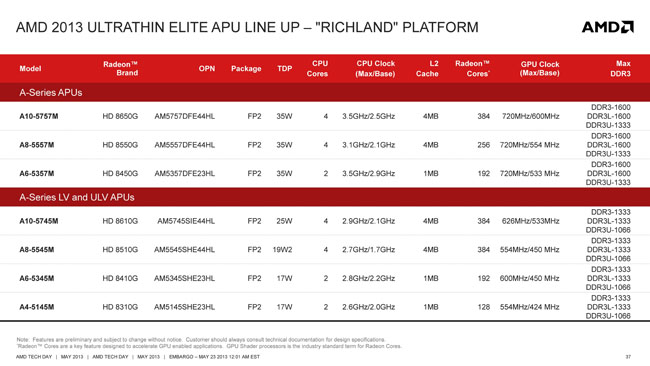 While not introduced today, we round-up the entire AMD mobile platform with the inclusion of the Richland APU that was launched back in March targeted toward the Core i5 processors from Intel. 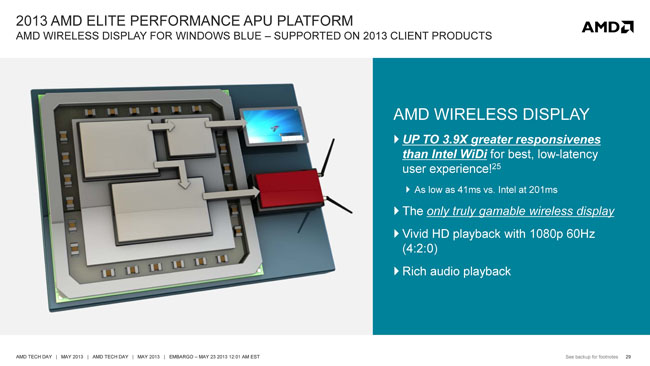 AMD adds support for wireless displays based on the Miracast standard. AMD claims that its wireless display implementation can deliver up to 3.9x greater responsiveness and as low as 41ms latency than Intel WiDi to deliver a better user experience. 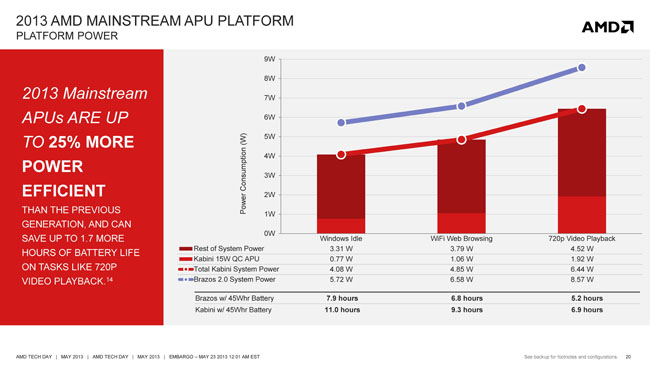 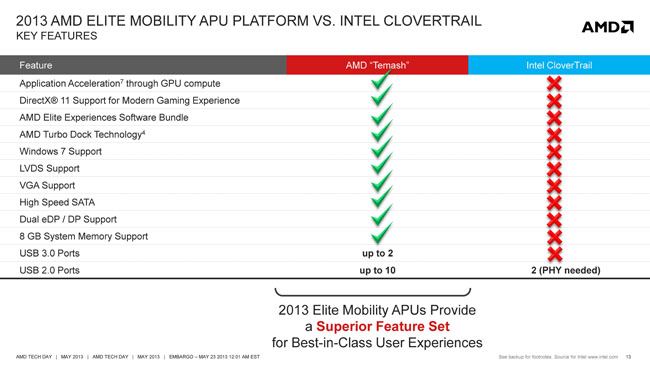 Another new feature is AMD Start Now Technology with smart sleep. This technology will learn user’s usage pattern and manage when to turn the system into deep hibernation. For example, if you always go to sleep at 11PM at night and wake up at 8PM, then during this time. Over time, the system will know that during these times, it will go into deep sleep as it does not expect to be used. 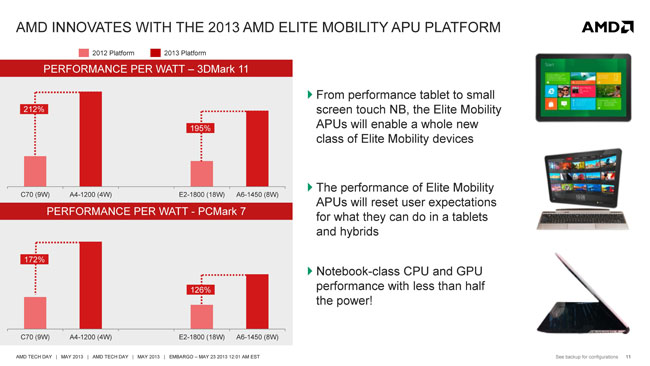 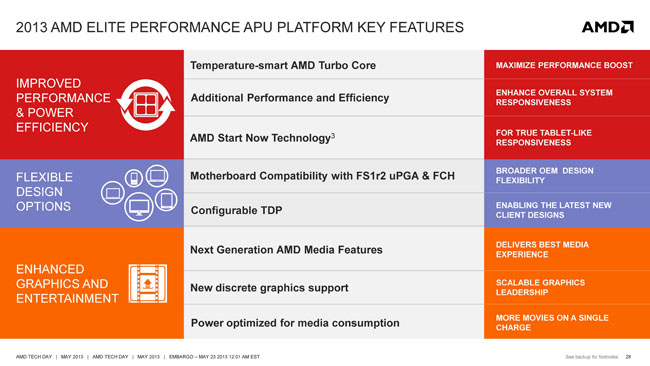 AMD’s press release emphasizes its platform key features that includes the configurable TDP and the motherboard compatibility with the existing FS1r2 uPGA and FCH. 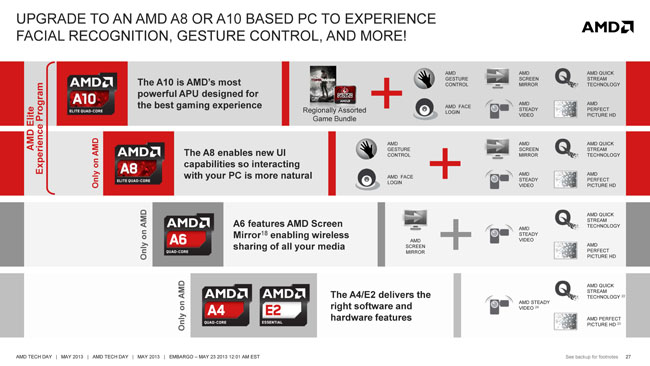 A quick break down of the various features bundled with AMD mobile platform. Across the board, every APU will support AMD Quick Stream, AMD Perfect Picture HD, and the AMD Stready Video. As we move up to the A6 APUs, we gained additonal Screen Mirror feature and the A8 adds the Face Login and the Gesture Control. The top of the line A10 includes all of the features mentioned and Assorted Game Bundle but this is regional specific. 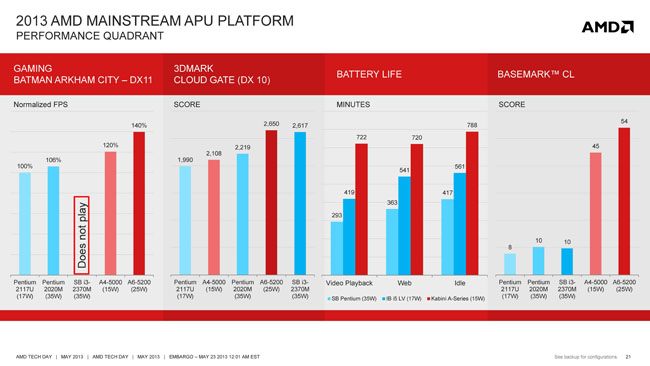 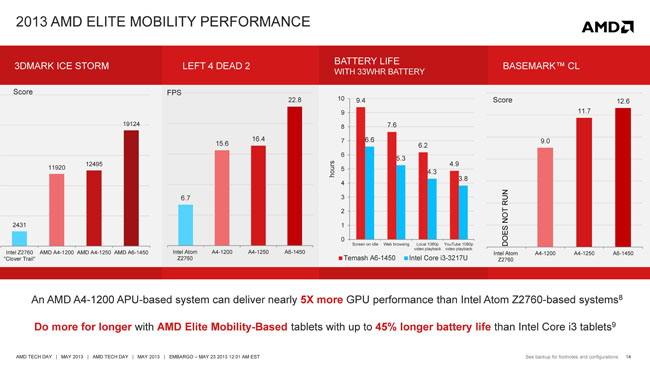 AMD shared some benchmarks comparing its APU against some of Intel CPU that includes Pentium 2117U, Pentium 2020M, Sandy Bridge 2370M, and Atom Z2760. 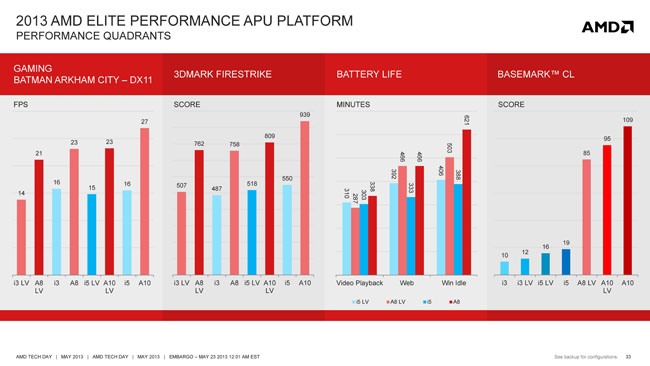 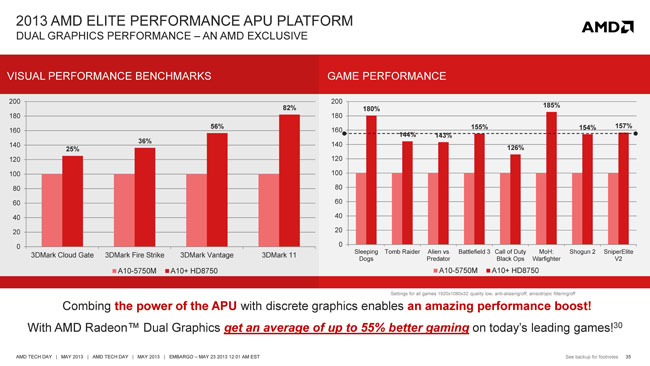 We also get some performance comparison for the Richland against Intel i3 LV, i3, and i5. However, we do not have the specific model of the processors.  AMD once again is putting emphasizes on its GPU power with the inclusion of the dual graphics benchmarks and gaming benchmarks. 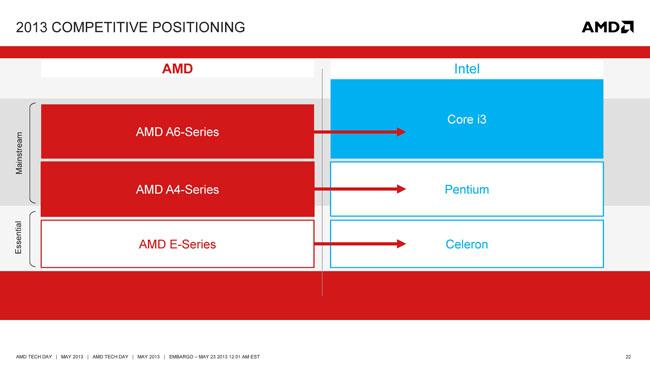 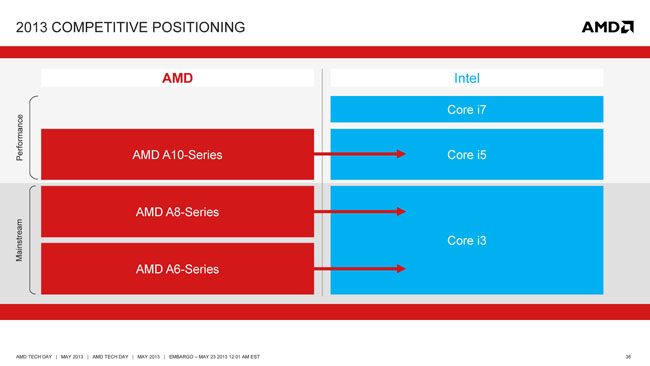 Based on the architecture and the clockspeed of these APUs, it is certain that Intel is going to have a clear advantage on the CPU performance side. Obviously, AMD is going to leverage its GPU power and lower pricing to compete against Intel. Compared against the Ivy Bridge mobile Pentium CPUs, Kabini has an advantage with the DirectX 11.1 support and the integrated Video Encoding Engine. Obviously, if the software can take advantage of the GPU through OpenCL, then the APU can potentially offer some great performance enhancement. Unfortunately, currently not many applications are written to take advantage of the OpenCL. However, the list is growing with companies like Adobe, WinZip, and Wolfram supporting OpenCL with their latest software title.

Positioned against the Intel Atom processor (which includes Clover Trail), the E series Temash APU may end up being a very competitive product for the tablets as it may bring low cost x86 tablets to the market. AMD claims Tablet with A6-1450 can deliver up to 45% longer battery life than the Core i3-3217U when playback local video at 1080p with screen brightness of 100 nits. Although, the comparison is done with the 8W APU against the 17W.

So, there you have it. AMD’s entire mobile platform for the year 2013: Richland, Kabini, and Temash. We have already seen Acer deliver the Aspire V5-122 notebook with Temash APU and MSI has the G70/G60 gaming notebook with Richland APUs. Now, we have to see if more system manufacturers are going to deliver notebooks and tablets with these APUs with a good combination of performance, price, and battery life.

Previous G.Skill RipjawsX F3-2133C9D-16GXH
Next Nvidia GeForce GTX 780: The Next Step in GeForce