Noctua is no stranger at designing high quality coolers, as the company has been in the cooler business since 2005. Their latest model, NH-L12, is a versatile low profile quiet cooler that is designed for small form factor PCs. It is perfect for those who wish to build a smaller system but may also want the ability to overclock.

Both Intel and AMD are pushing for more efficient processors. As a result, PCs are getting smaller and more people are looking to build systems with micro ATX or mini-ITX form factors. Micro ATX and mini-ITX systems often do not have the same overclocking headroom as ATX systems due to the space limitation for large coolers, but that does not mean it is completely out of the equation provided that you pick the right heatsink.

Packaged in classical Noctua style, the NH-L12 is shipped in white and brown box with plenty of marketing information and the detailed specification of the heatsink listed on the outside of the retail box. Inside, Noctua places the accessories in a separate box so they will not damage the cooler during shipping; there is plenty of padding around the cooler to ensure it arrives at your doorstep without a scratch. 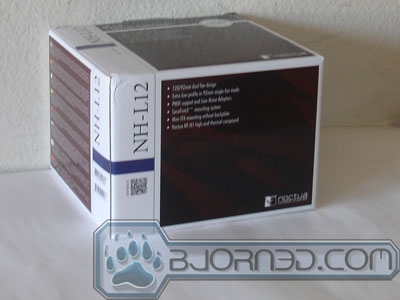 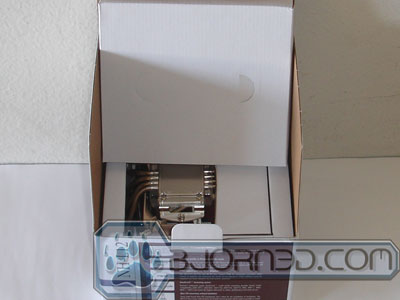 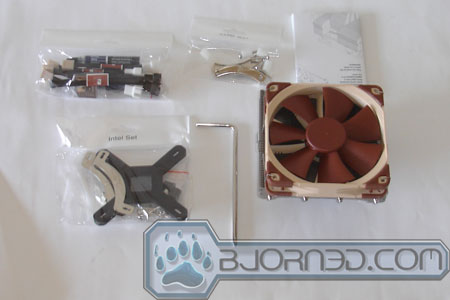 Inside, we get the NH-L12 cooler, the SecuFirm2 Mounting Kit for Intel and AMD processors, a tube of Noctua’s own NT-H1 high-grade thermal compound, two low-noise fan adapters (L.N.A), a Y-split fan cable, a mini-ITX mounting kit, and Noctua metal case-badge. The NH-L12 is compatible with a wide range of boards that includes Intel LGA2011, LGA1366, LGA1156, LGA1155, LGA775 & AMD AM2, AM2+, AM3, AM3+, and FM1 (backplate required). All the necessary bits and pieces are included so you would not need to spend any extra money for additional parts. The inclusion of a tube of thermal paste is a nice touch. 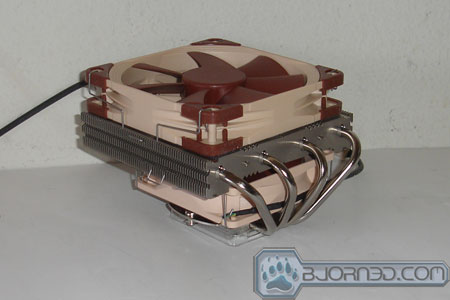 Low profile coolers often focus on the noise-level rather than cooling performance. With the NH-L12, Noctua has designed a cooler that can accommodate either a single or a dual fan depending on how much space is available. The NH-L12 has the ability to use a 92mm fan, a 120mm fan, or both. However, the NH-L12 is not designed for extreme overclockers and dual fan configuration is recommended if it is to be used with a CPU that has TDP higher than 95W (100W AMD A8 or A10 APU, 125W AMD FX CPU, or the 130W Core i7 processors).

The cooler is designed with four heat-pipes connecting to the base of the heatsink to the cooling fins. Copper with nickel plating is the choice for the base and heat-pipes while the aluminum is used to make up the cooling fins. The 120mm fan sits above the heatsink and the 92mm sits underneath the cooling fins. Noctua includes their NF-F12 fan and NF-B9 PWM fans. The fans are 25mm thick and come with 4-pin PWM connectors. The NF-F12 features Noctua SSO2 bearing with Focused Flow frame technology, is rated for minimum rotational speed of 300 and maximum speed of 1500 RPM, 93.4 m3/h airflow, and 22.4dBA noise-level. The NF-B9 is SSO bearing with BBT and VCN blade design. It has a rated rotational speed up to 1600 RPM, 64.3 m3/h airflow and 17.6 dBA noise-level.

While the thickness of the fans is identical, you cannot install the 120mm fan underneath the cooling fin. The cooling fins are asymmetric–the middle section on the bottom of the fins is slightly recessed a few mm to fit the 92mm fan. To dampen the vibrational noise, two stripes of rubber are placed under the cooling fins for the 92mm fan. The 120mm fan has integrated soft silicone anti-vibration pad. The cooler stands at 66mm with just the 92mm fan installed and 93mm with two fans installed. The height of the cooler should not pose any issue if you use it in most mATX or ATX cases, and unless you choose a very small mini-ITX case, we do not think that it would have much of an issue with it either.

The heat pipe extends out from one side of the cooler, leaving the other three sides open to minimize any clearance issue. However, the heatpipes curving out of the base can pose clearance issue against tall PWM heatsinks or against an LGA2011 board with tall DIMMs. We did not have any issue with the boards we have here in the lab since all recent motherboards have low profile PWM heatsinks. However, LGA2011 boards will most likely be an issue because the memories are located on both sides of the CPU.

The installation of the NH-L12 is very easy thanks to the excellent color installation guide that Noctua always includes with their heatsinks. When it comes to cooler installation, we have found that Noctua always takes a more secure approach as opposed to the simplistic approach. Their coolers always require a little more work and it often involves a few more pieces and screws but the end result is that it is always very secure. Even for large and heavy heatsinks like the ND-14 that we had reviewed in the past, weight never poses any issue on our boards.

While the NH-L12 can be used on both AMD and Intel systems, we only tested the cooler with an Intel Socket 1155 system. The installation for the AMD systems are much simpler as it only involves screwing the heatsink mounting bar to the motherboard backplate (the heatsink requires the motherboard’s own backplate). Then users can screw the heatsink on. For the Intel boards, the installation process is essentially identical for all compatible sockets. The parts involved are pretty much the same as well. This is nice, as if you ever upgrade to another Intel platform, you not have to fumble through the the accessory box again to use the heatsink on the new CPU. 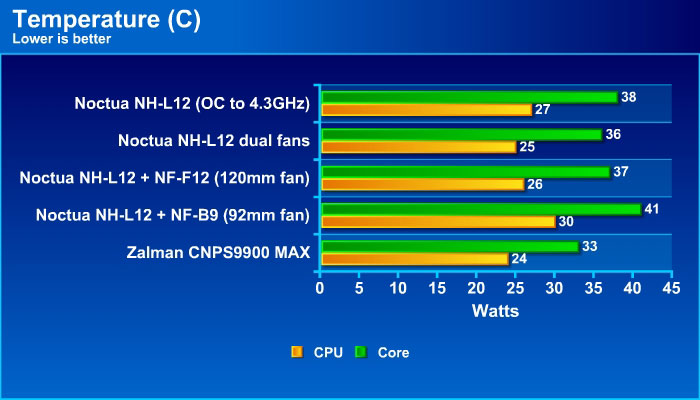 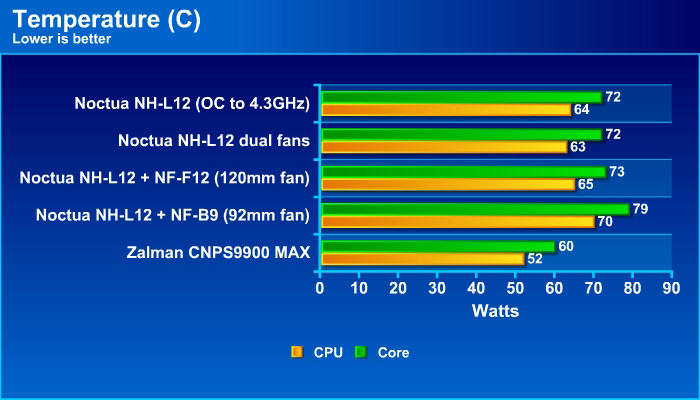 With just a single 92nm, the NH-L12 is just barely able to keep our 77W Core i7 3770K running cool at stock speed. Our CPU reaches 70°C under load with Prime95 torture test. When paired with a single 120mm or in dual fan configuration, we see a drop in the temperature compared to the single 92mm fan setup but the performance difference with either configuration is not that big. With a single 120mm fan, we we get 5-6°C cooler, and the two fans combination reduces the temperature by 1~2°C more. Note, the temperature is taken with the motherboard’s fan control on. If we disable the automatic fan control in the motherboard, we were able to get about 5°C lower in temperature.

What is impressive though, is that we were able to overclock our processor to 4.3 GHz while keeping the same temperature reading. This means that despite the fact that the NH-L12 has only four heatpipes, they are very efficient at conducting heat away from the base. Thus, there is some overclocking potential with the NH-L12. The Ivy Bridge processor can easily be overclocked to 4.6 GHz but we are often held back by the high heat output at this speed. Able to get 4.3 GHz with a low profile heatsink with four heat-pipe is quite an impressive.

While the cooling performance for the NH-L12 may not be the best of the best, the noise-level is very impressive. For a cooler that will most likely end up in an HTPC or a small form factor PC, the NH-L12 is one of the quietest heatsinks we have tested. Even with both fans installed, we can barely hear the noise from the fans.

The retail price of the $69.99 for the NH-L12 is higher than most coolers and getting into the territory of the enthusiasts market. However, the cooler is certainly not designed for enthusiasts who want to push their CPU. Rather it is aimed toward those who wish to have a smaller PC with quiet operation. Do not get us wrong, the NH-L12 performs quite respectably givng to its small size and low-profile design. While the NH-L12 may not win any performance crown, it certainly shines in other areas like the noise-level.

If we consider the versatility, wide range of CPU support, and the 5 year warranty, we feel that it would be a good investment with the NH-L12. Non-overclockers should not have any issue with just the single 92nm fan and light overclockers can certainly take the advantage of the second fan for extra performance boost. No matter which configuration you use, you certainly would enjoy a whispering quiet PC.

Single 92mm fan performance does not provide much overclocking headroom$69.99 price tag can be a tad expensive

Summary: The NH-L12 is taking the premium cooler into a different direction by offering extremely quiet noise-level with relatively small footprint while keeping the system relatively cool. For its versatility and innovation, the Noctua NH-L12 wins the Bjorn3D Silver Bear Award.
Share