The iPad has come a long way since it was introduced a few years ago. While most people probably still use it primarily for gaming and entertainment there is no question that it also slowly is starting to be used for more professional uses, many of which really benefit from a keyboard. Logitech is a company that has many keyboards for the various iPad versions and today we are testing one of their latest: the Ultrathin Keyboard Cover which is compatible with the iPad 2 and 3.

Considering the number of different keyboard covers Logitech sells, you might wonder what makes he Logitech Ultrathin Keyboard Cover stand out. Well, as the name suggests it is supposed to be “ultra thin”. The idea behind this is of course to make sure it does not add to much weight or thickness to the iPad when using it or transporting it.

Let’s take a look at the specifications. Logitech themselves does not really give out much specifications so we had to break out the scale and the ruler to get some readings.

As the specifications tells us this is indeed a thin and light keyboard cover. 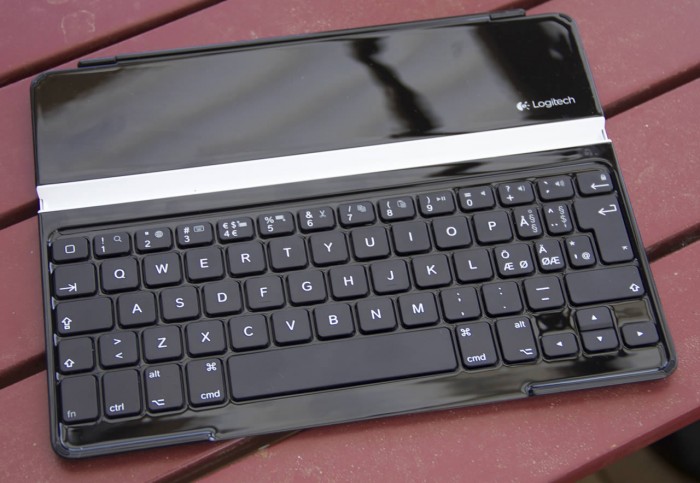 Since the cover needs to have the same dimensions as the iPad we do not get a full sized keyboard. We still get all the keys we need, even the Nordic special keys this reviewer needs, and if you look closely you also see that there are shortcuts on some keys for the iPad that can be reached via the fn-key. The keyboard cover does lack a track pad of any sort which means that you still will need to use touch on the iPad when changing apps, when you need to push a button etc. 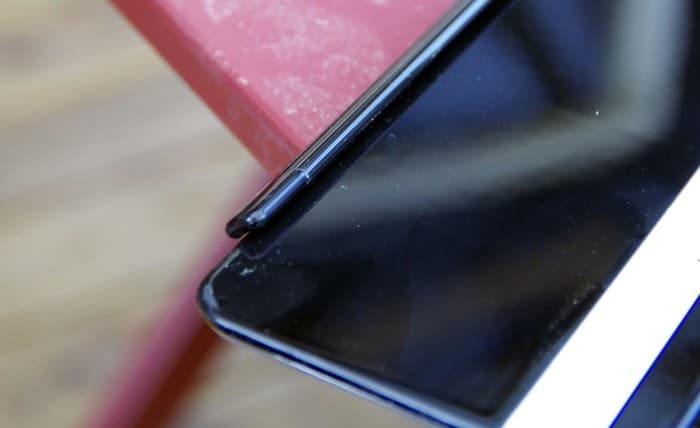 The cover is held in place through the same type of magnetic connector that you find on Apple’s SmartCover.

The iPad sits in a groove just above the keyboard. At the bottom of the groove there is a magnetic strip which holds the iPad so it can’t easily fall off. It is actually possible to lift everything just by holding the iPad, that is how strong the magnet is. The magnet is also strong enough so that you can continue to use touch on the iPad without having to worry it will fall off. The iPad is held at a comfortable angle which works both for word processing or movie watching.

The Logitech Ultrathing Keyboard Cover has a built in battery that cannot be changed. It is charged through a mini-USB cable from your computer and a full charge is supposed to hold for up to 6 months. The connection to the iPad is made over Bluetooth and if your iPad cannot find it automatically (ours did), then you can push the Bluetooth button to initiate a connection to the iPad. 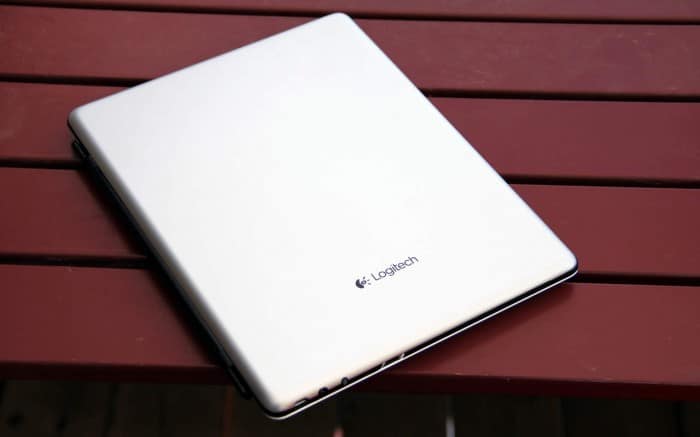 The finish of the Logitech Ultrathin Keyboard Cover is aluminium and matches the backside of the iPad perfectly. It does actually make the whole package look quite cool when you close the lid as you get an all-aluminium iPad. It does also make it look like the iPad in fact was made by Logitech with the logo on the front.

Since this is only half a lid it is worth noting that the backside of the iPad no longer is protected so if you are worried about scratches on the back then you need a separate cover for the back. 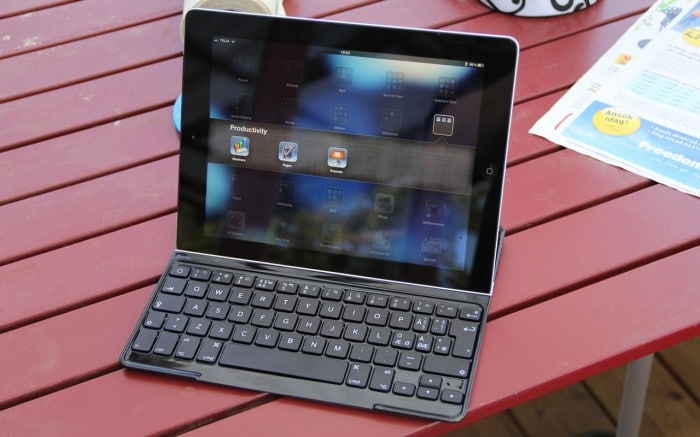 This is how it looks when we use it. As we mentioned before the iPad is held at a comfortable angle and also sits steadily on the keyboard cover so you never feel it is about to fall off.

While typing on the keys never will be as nice as typing on a regular keyboard, it still works pretty well even when you type at a quicker speed. It takes a bit getting used to as the keys are small and cramped; for example the Left Shift key and the Enter key are quite small, and can be pressed simultaneously by accident. At first when we typed our error rate was quite high but it did not take long to get it down to acceptable levels. We did not notice any lag between typing on the keyboard and watching the characters appear on the iPad.

The Logitech Ultrathin Keyboard Cover is another great iPad-product from Logitech. It combines the need for a good keyboard with the need for a slim cover perfectly. With a price around $99 it is not cheap but well worth the money considering what you get.