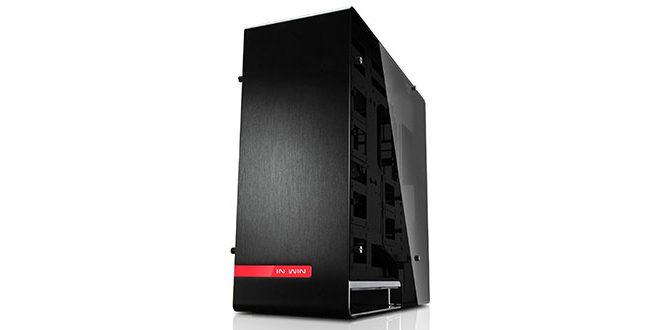 From the front, the In Win 909 takes a minimalist approach much like Apple does with its products giving it a clean and elegant look that is not over complicated with buttons, fans, LEDs and bold colors like you see with some other brands. Instead of making a case that demands attention as a focal point the 909 acts much like a fine piece or art that accents and complement the space in which it exists and also gives character to other physical items in the room. We also feel that if part of a luxurious office, it could also highlight the individual behind the desk. Now we feel we should advise you that the 909 is huge, as in this case could double as an NYC apartment! The 909 is constructed from a single solid piece of aluminum that is finished in a black brushed finish, with the In Win in red.

As noticed from the section above, there are no buttons or ports on the front because In Win went with a minimalist approach and they relocated the power button and the ports to the side where they are recessed and hidden. These buttons and ports are situated directly below the tempered glass side panel. Yes, we said that right, tempered glass not plexiglass, but real glass that has a dark tint to it that allows you to see into your rig!  Unlike most cases the 909 utilizes a unique peg system to hold the glass panel.  These pegs are made from metal but are wrapped in rubber to isolate the glass from any vibration and are held in place with four decorative screw-on pegs.

To go more in depth, we take a closer look at the I/O panel on this side; it features 3 USB 3.0 ports, 1 USB 3.1 Type-C, HD audio and the power button and LED lighting control. We wish In Win would have incorporated a fan controller on the I/O panel. This panel is also recessed a slight bit under the glass side panel adding to the overall aesthetics of the 909. 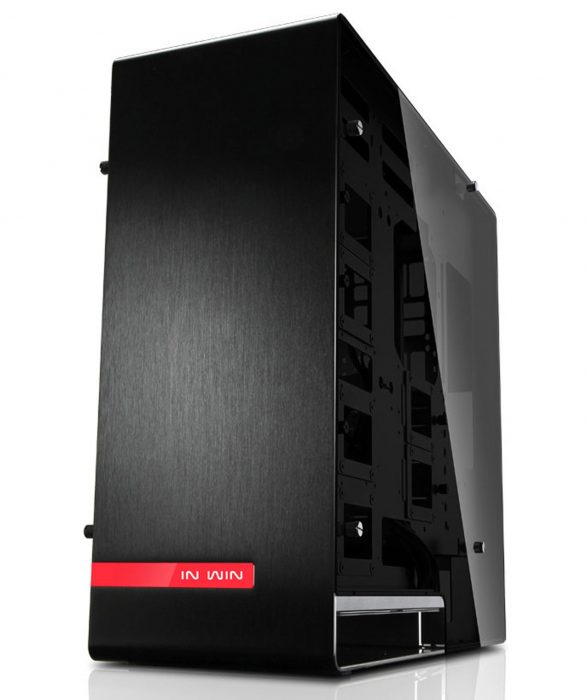 Moving to the right side of the 909, we find another identical tempered glass side panel that covers the rear of the motherboard tray. When we say identical, we truly mean identical and were surprised that the two are interchangeable. However, we were a bit confused by In Win’s choice to make this panel out of tempered glass since it allows the user to see all the PSU wiring and other cabling and we would have rather seen it made out of a solid piece of aluminum in the same black brushed finish as the rest of the case.

Looking at the rear of the 909 might have some wondering, hey where the rear I/O panel should be , the PCIe slots are. This can be especially confusing since we can see the PSU and the three unique fan cutouts. To answer the question for those wondering, the 909 features a compartment that extends beyond what we normally consider the rear of the case and allows you to conceal all the wires that you would plug into the rear I/O panel and into PCIe cards. The compartment houses the space for up to a 360mm Radiator, which isolates the heat from the radiator from the CPU and GPUs. It is also to be noted that the rear metal piece that holds the radiator is removable to make building your system a breeze. This can be done by unscrewing the four captive crews that are located on the four corners. 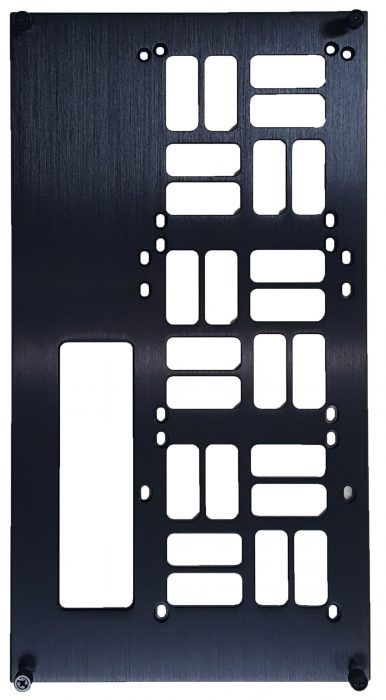 Now taking a look at the inner section that would normally be the rear of the case, the only big difference is that the PSU is blocked off and protrudes out to what the real rear panel is on this case. Also, because this is more of a divider, there are more openings to allow for the liquid cooling tubing to make plumbing your system a breeze even for the novice system builder.

Coming to the top and also on the bottom is a solid piece of aluminum and when we say solid we really do mean solid. This is because the 909 uses one piece of aluminum alloy that is mandrel bent that goes all the way to the back of the case where it joins up with the radiator mount section that screws into this single and elegant piece of aluminum. Also it is important to note that there is cooling capacity via the bottom through the pass through the channel. This is a design that we used to see on some Dell systems, just with much higher quality materials. 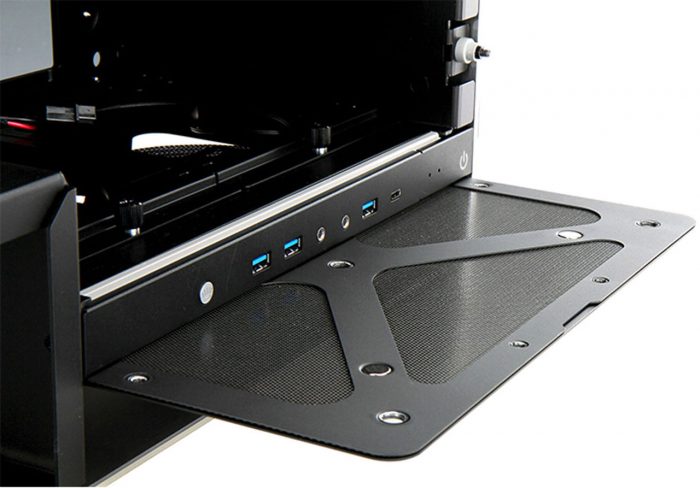 Removing the bottom fan filter we can see the thought and design process behind manufacturing this filter out of aluminum and using embedded magnets to attach to the bottom of the pass through an area that will be discussed later. This piece is one of the nicest filters we have experienced in any case and speaks volumes to the level of craftsmanship at In Win.

The interior of the 909 is about the same size as an NYC apartment and allows the users tons of space for any component they could ever want to use in their builds. In addition, there is plenty of room for several radiators for those users who plan to liquid cool not only their CPU but also GPUs and chipsets. We have even seen pictures of dual CPU builds with full liquid cooling and the 909 has no issues fitting this. 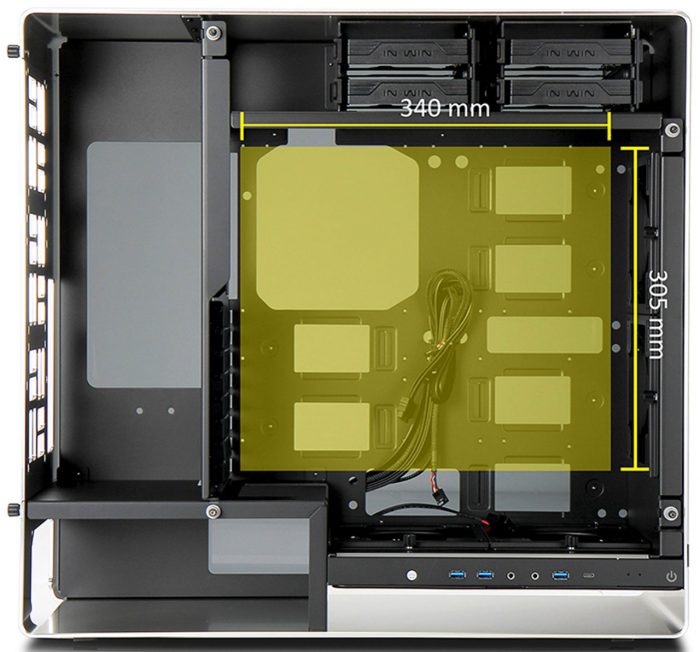 Upon removing the large heavy piece of tempered glass that is the side panel we get to see the expansive motherboard section of the 909 and we get a true idea of just how many options it gives users for various configurations and component options. We can also see the four removable 120mm or 140mm fan mounts that feature a steel frame that is held in place with a captive screw. We rather enjoyed the captive screws that In Win used throughout the case since while working on a build or doing maintenance or upgrades, screws tend to be one of the easiest parts to drop and/or lose. Another feature that is immediately noticeable is the rectangular cutouts surrounding where the motherboard would go in places where we typically see cable management cutouts that are actually SSD mounts.

The upper front section of the 909 is comprised of 4 3.5 inch tool-less hard drive mounts; this is an isolated thermal chamber that is separated from the motherboard chamber by a divider. The drive trays are made out of heavy duty abs plastic that we found to be sturdy enough that we didn’t have to worry about breaking it while installing hard drives. These trays also feature the In Win logo on the front of the tray and finger tabs for pulling the trays out. We were a bit surprised that In Win did not build any SSD mounts up in this space also since there is plenty of room.

In the bottom, the rear compartment is where the PSU mounts are and it is nestled directly under the liquid cooling chamber.  We were surprised how massive this chamber of the case really is. We mounted a new Thermaltake 1250W PSU and we still had plenty of space for connecting and running the wiring once we had installed this new PSU.

Now we get to the liquid cooling components thermal chamber. This semi isolated chamber rests above the PSU chamber and behind what is typically considered the rear of the case. In this chamber we find there is plenty of room to mount up to a 360mm long radiator and will fit even thicker radiators and still leave plenty of room to run your favorite fans. On the removable back plate/radiator mount, the CNC machined airflow cutouts that further add to the aesthetics of the 909. We also found the cutout for your cables to be generous and with this type of system we could see users putting all there cables into a large sleeve. 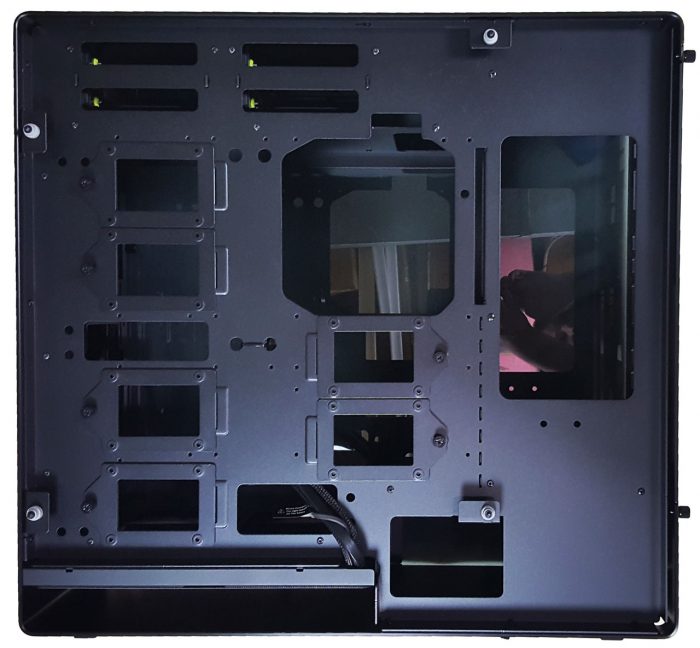 On the rear of the motherboard tray on the 909, we get a clear view of the plus sized motherboard cutout that allows you to seamlessly mount the cooling bracket or if you’re running a dual CPU board, multiple brackets. Also clearly visible are the six SSD mount brackets; we are not sure why there is a physical cutout behind them that goes all the way through to the other side. There are also several large cutouts that we can assume are for cable management; however, we would have preferred to have seen traditional cable management cutouts that feature rubberized grommets like what are found in other cases. There is also an extra large cutout that covers a large percentage of the liquid cooling chamber on this case and we found this instrumental for running wiring to the fans but also for plugging in any cables to the actual motherboard or PCIe cards you may be running. On the very bottom from the end of the PSU chamber, there is a pass through so that the fans can pull in fresh air through the aluminum magnetic filter.

We found the In Win to be more of a work of art and expression in its design and aesthetics. While incredibly beautiful, it is still a well though out case the allows the users imagination to go wild when building inside of it. We were especially surprised that the case almost demands that you include some sort of LED lighting in the case, Its tinted glass side panels also amplify this desire. Also the liquid cooling options available were vast and pretty much covers any type of system you could dream up. If your looking to add some style and elegance to your office or game room then look no further than the In Win 909.