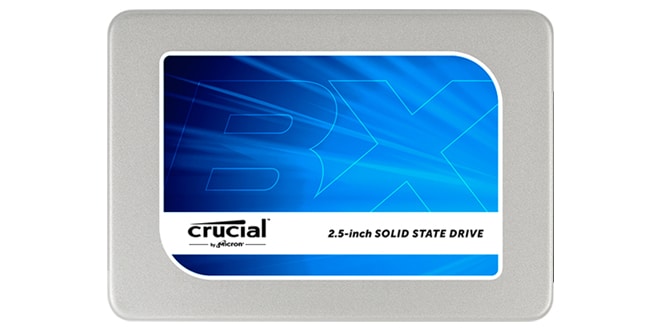 Crucial is no rookie when it comes to the memory and SSD game, so an introduction to the company as a whole is mostly unnecessary. The introduction that does need to take place however, is the introduction of Micron’s first 16nm TLC SSDs, the BX200 line. Aimed at users that are still utilizing a standard, spinning-disc hard drive as their main OS drive, the BX200 line boasts performance levels that are up to 13 times faster than a hard drive, according to Crucial. Available in 240GB, 480GB, and 960GB sizes, the Crucial BX200 line replaces the very popular, and highly touted BX100 line, and looks to offer significant performance increases for non-power-users still utilizing spinning-discs. Making the jump from traditional hard drives to SSDs is something that can prove to be very eye-opening, so let’s see how the 480GB BX200 SSD from Crucial performs. 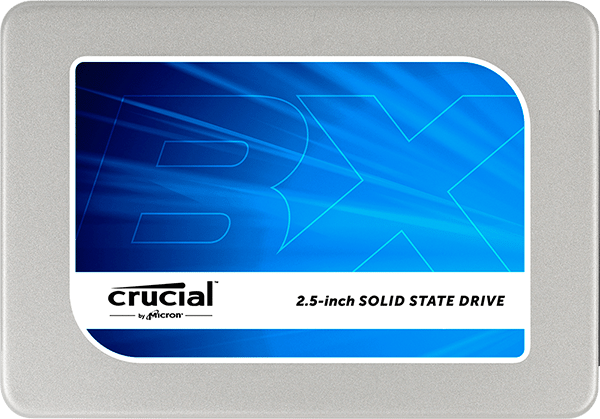 While it doesn’t sport any crazy features, the BX200 does hold the title as the first SSD to feature Micron’s 16 nm TLC NAND. Paired up with this TLC is Silicon Motion’s new SM2256 controller.

All three sizes of the BX200 (240GB, 480GB, 960GB) offer identical performance specifications. Sequential reads of up to 540 MB/s, and Sequential writes up to 490 MB/s place this drive firmly within the value sector. 4KB random reads and writes bring the IOPS up to 66k and 78k, respectively. In addition to the performance specifications, most users looking into the BX200 series will be happy to find a 72TB TBW endurance rating, which equals out to around 40GB per day for 5 years. While this may not seem like a lot per day at first, most users will be well within this endurance rating, especially when utilizing this type of drive in a basic home PC or laptop. Tack on a 3-year limited warranty, and the BX200 series is shaping up to be a great budget drive.

The BX200 comes packaged in Crucial’s standard SSD packaging case. The small cardboard box features a quick look at the enclosed SSD, and denotes the size of the drive inside. The back of the box gives details regarding the contents of the box itself, and also lists support information for users requiring assistance or help. 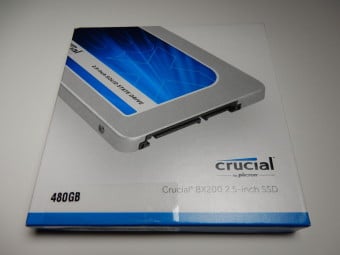 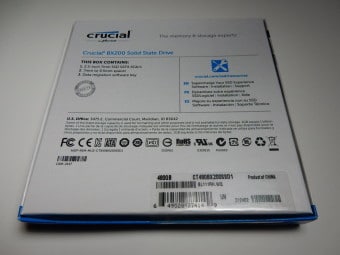 Inside the packaging we find the SSD itself, safely sealed in an anti-static bag. Also inside the box are the 2.5mm spacing adapter for when the drive is used in a 9.5mm setting. The final piece inside the box is an information card and activation key for a free copy of Acronis True Image HD software. We love seeing migration software included with new drives, as it makes migrations so much easier. 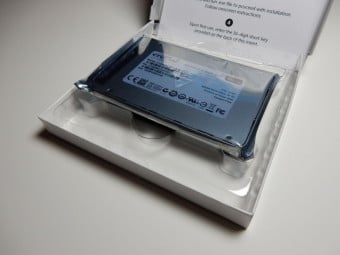 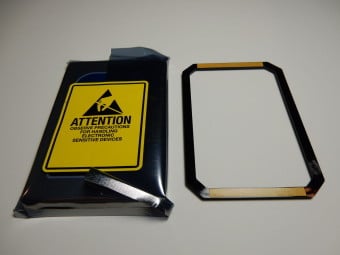 The MX200 is a pretty basic looking SSD. A large, mostly blue, sticker adorns the top of the drive, and denotes the BX series. No mention of the storage size is found on the top. The casing of the drive is your standard metal fare, and snaps together using a few clips along the perimeter of the drive. 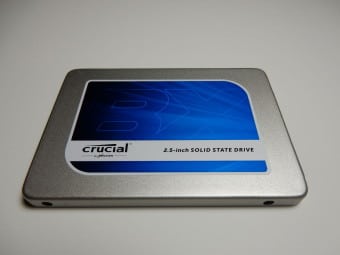 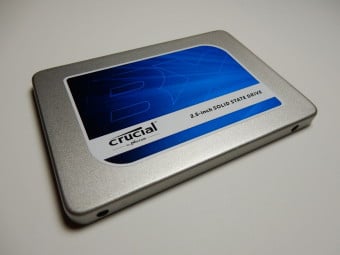 The bottom of the MX200 sports a sticker as well, but this time there is some relevant information. A model number, part number and serial number, along with capacity and interface specifications can all be found on the back side of the drive. Four standard mounting holes are available for installation. 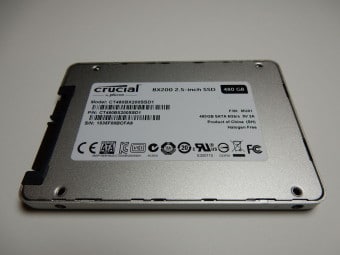 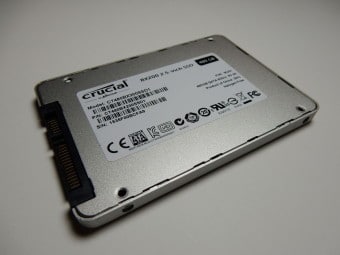 Once the outer layers of the BX200 have been removed, we are treated with a full-sized 2.5″ PCB. Eight Micron 16nm TLC NAND chips are attached to the top side of the PCB, and are divided across four channels. 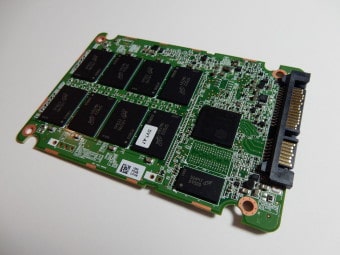 A Silicon Motion SM2256 controller has been chosen by Crucial to perform the heavy lifting for the BX200 line of SSDs. While this single-core controller should provide improved efficiency, it can get a bit bogged down performing multiple duties like IO operations along with garbage collection. 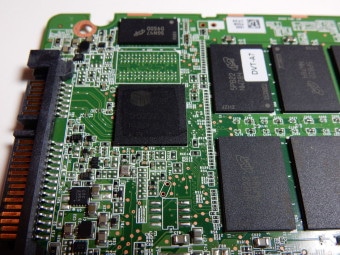 As with most modern storage devices, the installation of the Crucial BX200 was a breeze. After physically installing the drive in our case, we simply powered-up, formatted the drive with Windows’ Disk Management tools, and we were off to the races. 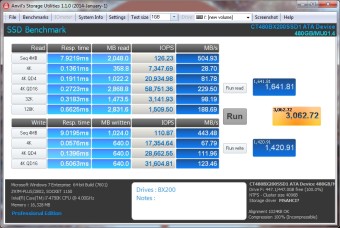 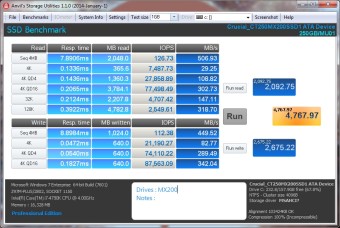 We really like Anvil’s SSD benchmark, as it gives us not only a final score for a drive, but also breaks that score down into various sub-scores. Throughout the read portion of the benchmark, the differences between the beginner-based BX200 and the enthusiast-based MX200 become apparent quite quickly. While the Sequential 4MB test was nearly identical, the BX200 really starts to lag behind the MX200 in both throughput and IOPs. Once we bring the write portion of the benchmark into play, the differences again are very apparent in the 4K QD4 and 4K QD16 tests, with the BX practically stammering through the test compared to the MX200 drive. The overall score of the BX200 shows it as coming in at about 46% of the score of its MX200 brethren. 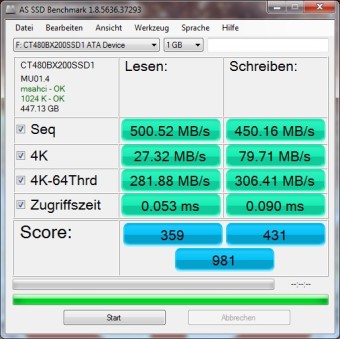 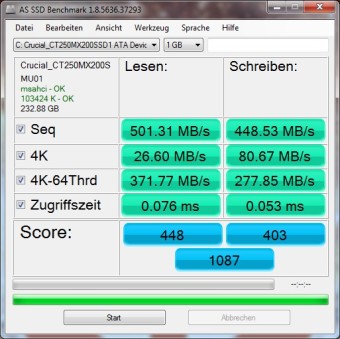 AS SSD Benchmark was utilized with both a 1GB and 10GB setting. Above we can see that the performance results of our BX200 and MX200 drives were very similar, with the only real noticeable difference being in the 4K 64-thread test. With a 1GB test file, the BX200 performed 20% slower than the MX200 in read operations, and was actually around 7% faster in write operations, thanks to it’s better performance in the 4K 64-thread test. Overall in the 1GB tests, the BX200 performed within 10% of the MX200. Let’s take a look at what happens when we increase the size of the test file to 10GB. 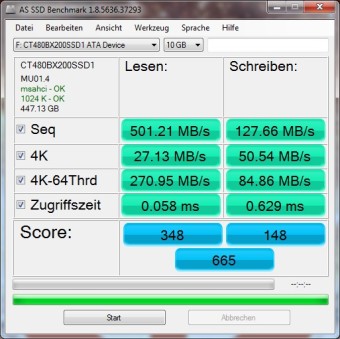 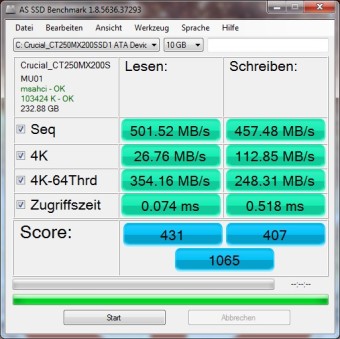 With the test file size set at 10GB, we can really start to see the performance difference between these two drives. Reads are pretty close overall, with the BX200’s only real performance hit being seen in the 4K 64-thread test. However, once we switch over to the write tests, we really see where the BX200 falls flat. Overall, the BX200 is almost 64% slower when testing with large files. As many others have pointed out when taking a look at the BX200 series of SSDs, once the much faster SLC cache on the drive is filled up, the write speeds simply plummet. We see that first-hand here, with our sequential writes going from 450.16 MB/s with a 1GB file, all the way down to 127.66 MB/s with a 10GB file. That averages out to a 67% drop in performance in the same drive, when comparing small and large file writes. Thankfully, when reading larger files, the performance is nearly identical between file sizes. 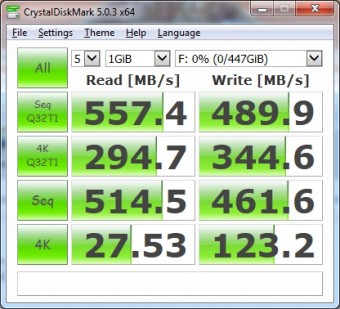 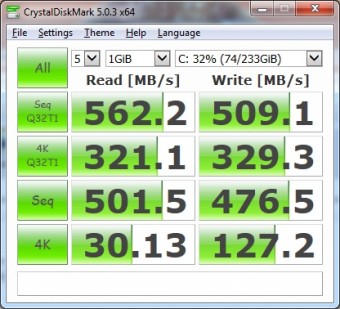 An all-time favorite, and often-used benchmark, Crystal Disk Mark gives us a quick and easy view of just how the drives being tested perform. Using the standard settings, the two drives are nearly indistinguishable. The only real difference is in the 4K Q32T1 test, with the MX200 pulling ahead of the BX200 in read operations. 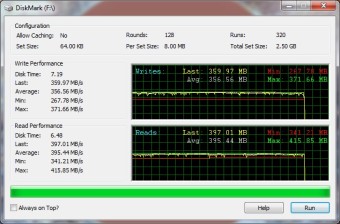 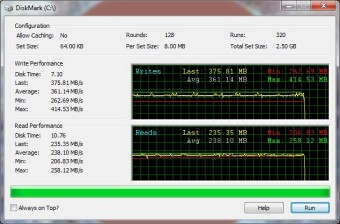 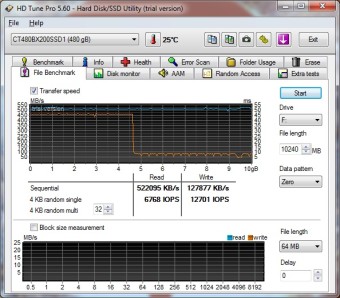 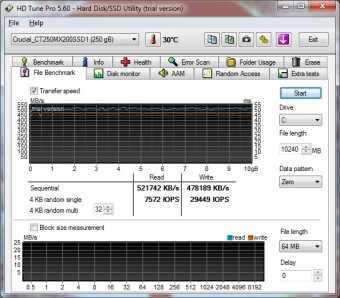 Our main focus with the HD Tune benchmark was to again show the impact that the SLC buffer of the BX200 drive when writing large files. At around the 4.5GB mark it is very clear to see the write speeds fall off of a cliff and continue for the rest of the 10GB test file. For the first section of the test, the performance was perfectly acceptable, with a write speed just slightly above 450 MB/s. However, once the SLC cache was full and writes had to be performed directly to the TLC NAND, the write speeds dropped to less than 100 MB/s, a performance drop somewhere near 78%. Compared to the overall write speeds of the MX200, the BX200 is 74% slower with large files. 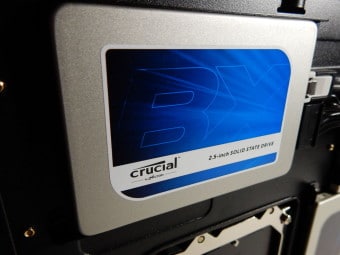 So what do the results of all of our testing really mean? Well, it means a few things really. First off is that we definitely do not recommended this drive for users looking for the fastest SSD out there. That is a given. Second, this drive is also not suited for users that will be writing large (4GB+) files on a regular basis. Once the SLC cache on the BX200 is exhausted, write operations of the drive are abysmal. So if the BX200 isn’t suited for your more advanced users, then who was this product line intended for? Would anyone even be interested in this line of drives?

The quick and simple answer is that there is a whole market of users that could very easily benefit from a low-cost, entry-level SSD. Think of the performance boost that this drive would give to mom and dad’s aging laptop that still utilizes a standard hard drive. Even replacing or supplementing a secondary hard drive used for storage with the BX200 line is going to improve performance immensely. If you think about what normal, every-day use of a computer looks like for users that don’t fit the enthusiast demographic, the performance to be had when moving from a legacy drive to an SSD will be mind-blowing. The fact that Crucial also includes a complimentary license for Acronis True Image HD, shows that they are trying to make this jump in technologies easy for those looking to make the move.

In order to find a place in a market that is filled with hundreds of options, Crucial will have to be very aggressive with their pricing of the BX200 line, as the performance of this first implementation of Micron’s 16nm TLC NAND just doesn’t give it much to work with. Available at around $140 USD from various online retailers, the 480GB model in the BX200 line is only $20 cheaper than the MX200 model of the same size. The performance increases found across the board with the MX200 line will require some sort of price shifting for the BX200 line to become a viable option for users looking to make the move from traditional storage to SSDs. If Crucial can make that happen, then we think the BX200 line would be worth considering giving a second look.

To close things out, the BX200 line of SSDs was designed to provide users with a noticeable gain in performance when making the transition from a standard hard drive to an SSD. Clearly a budget drive, the Crucial BX200 just doesn’t have what it takes to live up to its expectations, especially when it is supposed to be replacing the highly-touted BX100. While Crucial may be able to impress first-time SSD users with the BX200 series, enthusiasts and power-users will probably want to look elsewhere for their primary storage device. That being said, we think that this product line can still find its place fulfilling the secondary storage needs of more demanding users.

Clearly a budget drive, the Crucial BX200 just doesn't have what it takes to live up to its expectations.