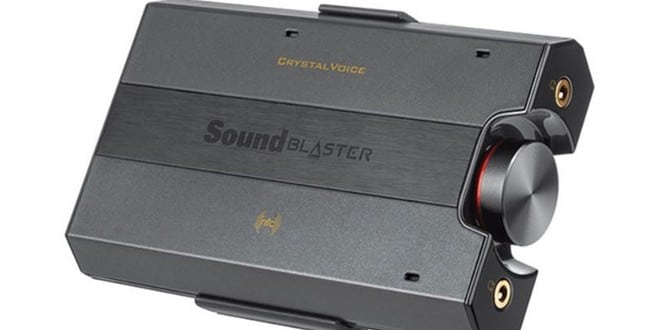 The Sound Blaster E5 is a 24-bit/192kHz, high resolution USB DAC and portable headphone amplifier that uses premium audiophile components and a 600 ohm headphone amplifier. Some of the technologies built in are aptX, SBC, SBX pro, Bluetooth 4.0, NFC and AAC. All of these enhance wireless audio quality to enrich the listening experience for the user.

In addition to this, the E5 features a dual orientation microphone with Creative’s Crystal voice technology that includes an auto-orientation sensor that is able to react to landscape or portrait orientation. This allows stereo recording to PC/Mac, smartphones and tablets.   We also found the E5 to be a pure pleasure when using the dual microphone with crystal voice for applications like TeamSpeak 3 and Skype; we had no issues and the feedback we got was that the voice on their end was crystal clear.

The Sound Blaster E5 features multiple input connectivity options that allow the user to connect to several different devices in multiple ways. One major unique feature on the E5 vs. the E3 is the capability to connect via optical and line inputs and outputs for the audiophiles. USB Micro and USB host connectivity options are also available for your devices, consoles and high definition media players. This is all possible with the Cirrus Logic CS5361 Analog to Digital converter chip that is built into the E5.

Another feature built into the E5 is Asynchronous mode and that means that in USB mode, the E5 pulls data from the system, allowing the DAC to process the digital signal at its optimal timing and ensuring the best quality audio with the smallest amount of distortion. Also, the Sound Blaster E5 is MFi-certified for Apple products, features an eight-hour battery life, and has a Scout Mode for gaming, featuring a SB-Axxx1 multi-core processor that is designed to increase depth and spatial width of the audio you hear. It also saves your personal E5 settings on the chip.

The software designed for the E5 is the Sound Blaster E-Series Control Panel in Windows, and Sound Blaster Central on Android and iOS. Once you have it installed and first open it, you notice the wide range of options and user configurability within the Windows version. 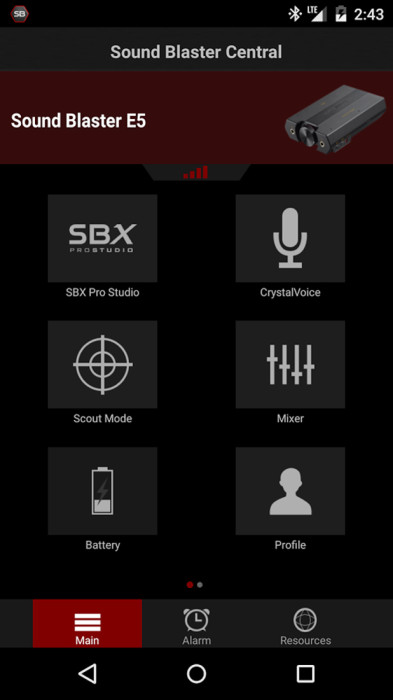 Because the mobile devices’ software is their general platform software for all Sound Blaster products, you will first need to pair the product with your device for the menus to open that allow you to configure different options. 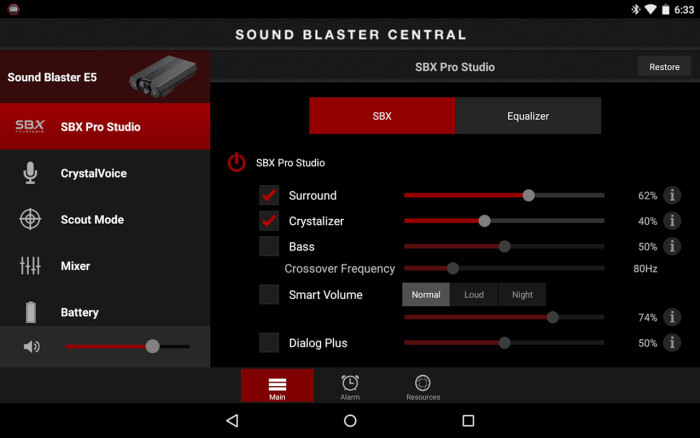 The first menu section is the SRX Pro Studio. Within this menu you can enable and control features like Surround, Crystalizer, Bass, Crossover Frequency, Smart Volume, Dialog Plus and also you can play a sample video to test any changes. 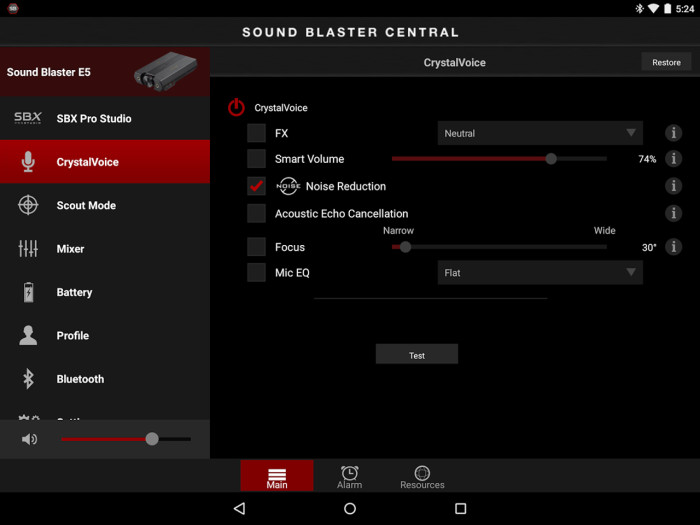 The CrystalVoice menu allows you to configure the microphone that is located on top of the E5, and features choices like noise reduction and one of our favorites, the FX selection that has some rather interesting voice options. 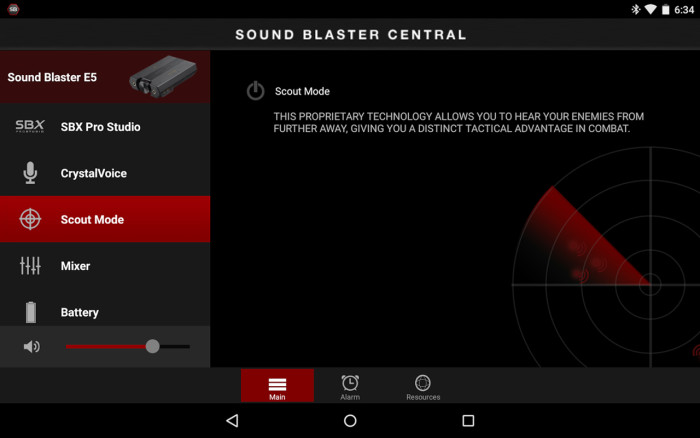 The next menu is crucial for gamers, and that is the Scout Mode. It heightens your situational awareness by allowing you to hear what is going on around you so that you can hear minute sounds like footsteps approaching your position. 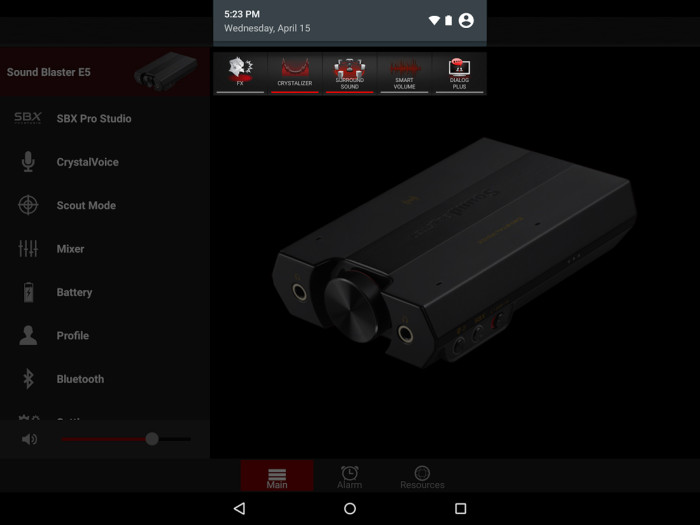 The 4th menu allows you to select between headphones and stereo speakers. When selecting speaker options you have several options and configurations with the E5. 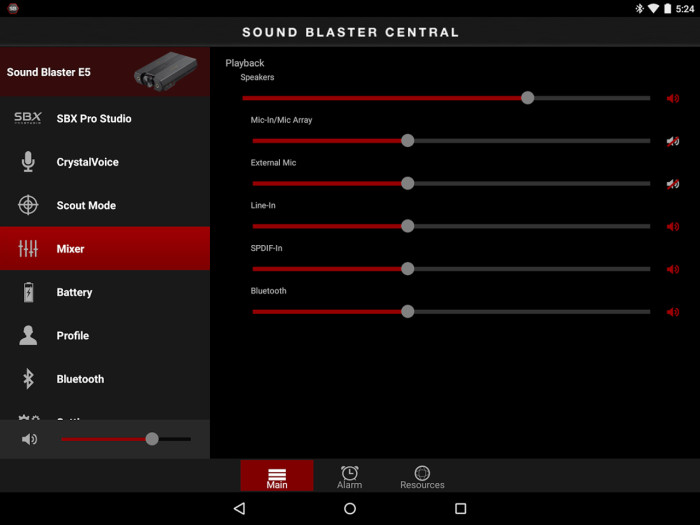 The next menu is the mixer where you can adjust the playback and recording for the speakers and the microphone. 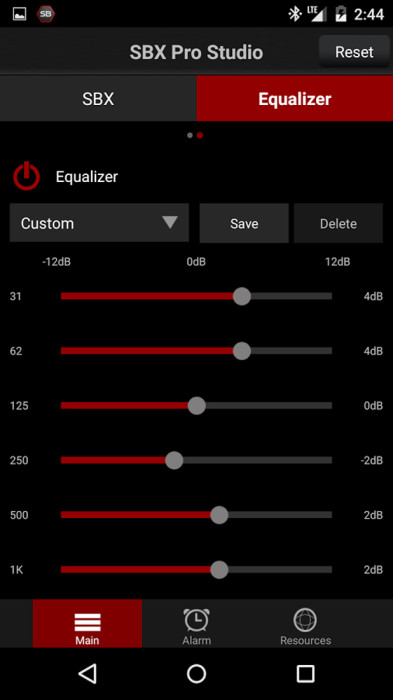 Below this is the equalizer that allows you to configure it to your own tastes or select from several preset profiles. 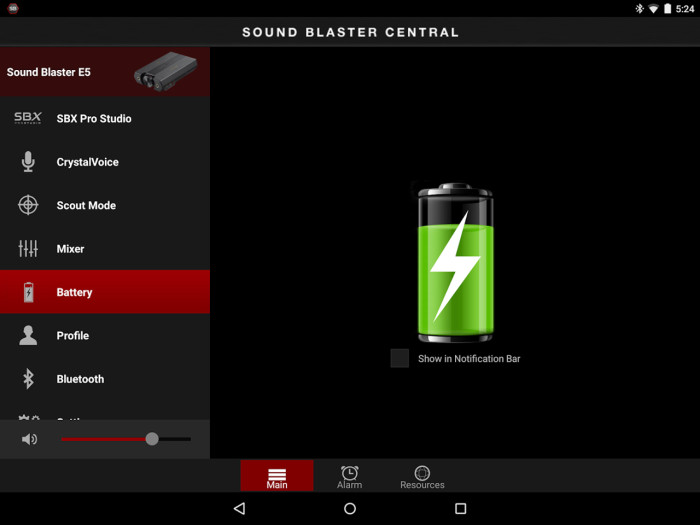 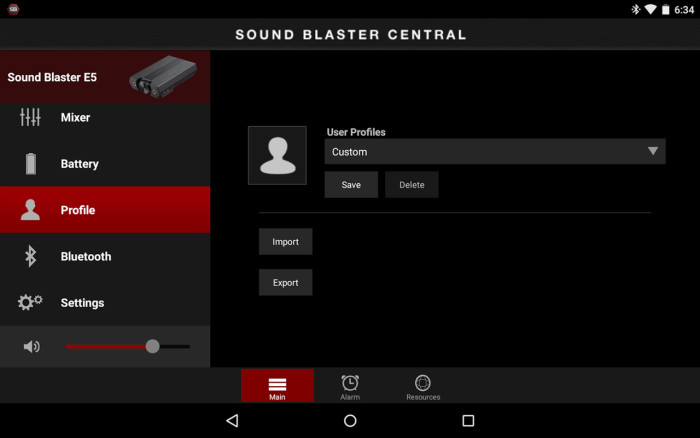 There is also the ability to set up user profiles for different games and media types that the user can quickly change between once they are set up.

The Bluetooth receiver on the E5 is always discover-able. As long as the E5 is turned on and the LED lit up, it is functioning. There is no need to push any buttons to connect your mobile device, and it is possible to connect multiple devices.  You can also hold down the power button to activate the Bluetooth, in which case it will connect to the closest device. However only one device can be playing at a time, and if you tell another device to play, it cuts off the first. During testing we tested it with a Samsung Galaxy S4, Samsung Galaxy Note5, ASUS TF700T and a laptop running Windows 8.1. The sound quality was always crystal clear with all of the devices we tested. There was no noticeable lag that we could detect while listening to music or watching movies. The range was exceptional, and we were able to leave our phone on the charger and to walk around the house and do chores, including going between floors without any noticeable degradation.

Upon installing the software, we found that the E5 offered a generous amount of user customization settings, options and configurable features.  We found these settings to cover virtually all of the aspects that we could have wanted, plus a few extras. (The different options, settings and configuration menus of the E5 were covered within the software section, allowing you to get a preview of what we discovered.)

In addition to mentioning the different devices we tested the E5 on, we feel that we should also mention the audio gear and types of media used for testing. The audio gear we tested the E5 with were a pair of Marshall Major headphones, Blue Mo-Fi Headphones, and a pair of Stereo speakers. As for the Headphones, the E5 with the settings I had configured made everything sound better! Some of the settings I found myself using that are found on the E5 are the SBX and Gain switched to High. We were a bit confounded as to why Sound Blaster included the SBX button on the E5. The reason we say this is that after playing the E5 and listening to different types of media, we ended up leaving the SBX permanently on since we thought that what we had plugged in sounded richer and sounded better. We are sure the R&D team at Creative had their own reasoning even if we couldn’t find it, but we felt that this could have been an option in the Sound Blaster Central software. 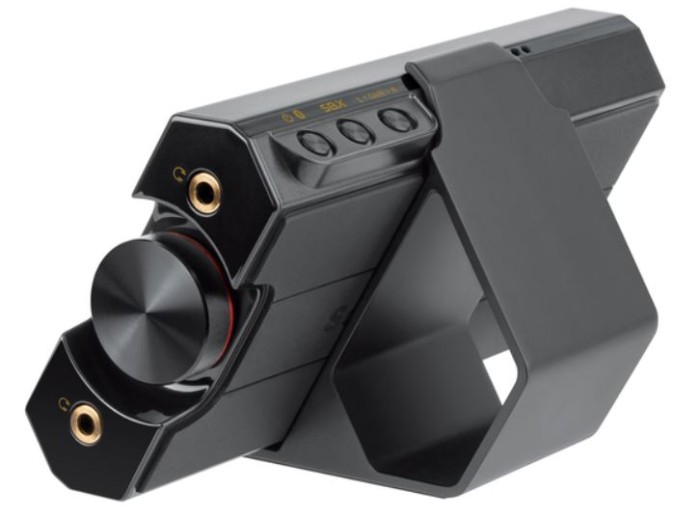 The media we used were a mix of music and movies that encompassed virtually every genre. Most of the music used was modern hit music with some classics mixed in. For movies we tested the E5’s audio quality on comedy, action, adventure, sci-fi, kids, drama, war and automotive. With all types of media, the E5 has you covered with its Sound Blaster Central software that allows you to tailor the settings to your specific tastes.

The Sound Blaster E5 we found to be a extremely well rounded and versatile product that never ceased to amaze us with its features and capability.