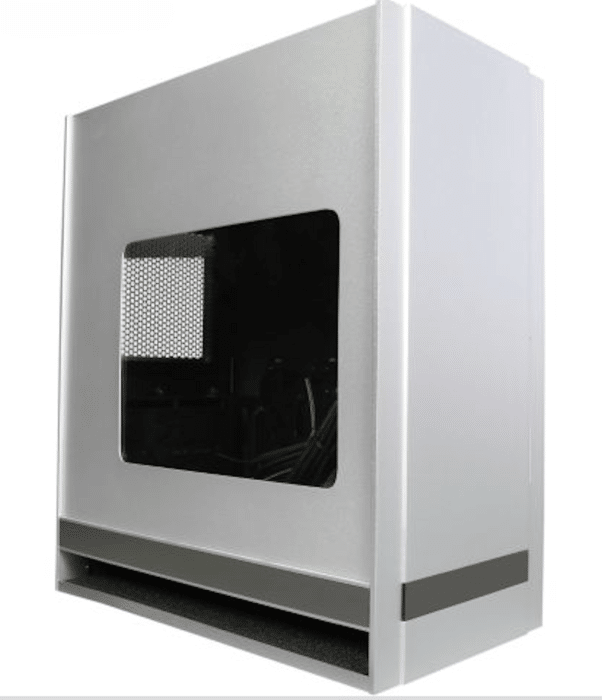 Backing up a little bit and revisiting the full Chassis (windowed) image you get a look at the wrap around aluminum skin but get no hint (yet) of the 90° rotated motherboard. Since there is no front door on the chassis you can see that no 5 1/4 inch drive bays ruin the look of front of the chassis. That’s one solid panel of aluminum but there is one chink in its aluminum armor. 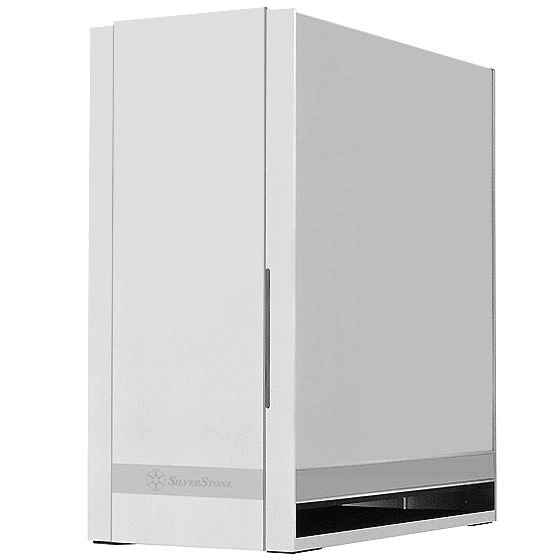 That one small slot is where the SOD02 Slim-line slot fed drive rests. Along the bottom strip is a muted SilverStone Logo and name. The black portion on the right side is an opening for air intake for the two huge Air Perpetrator fans. 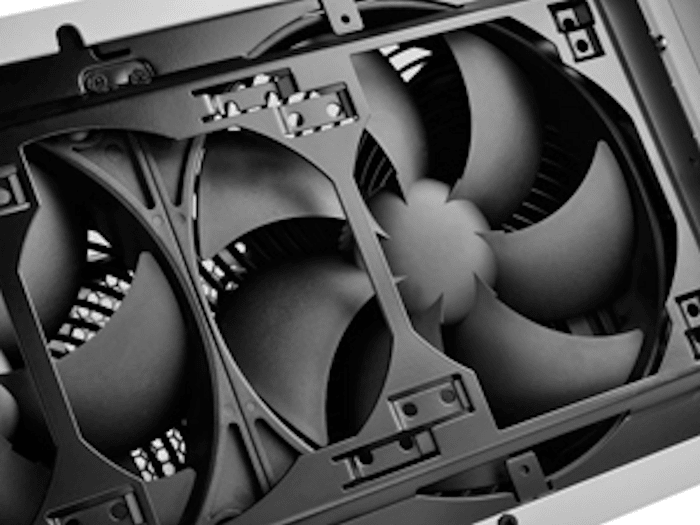 The two Air Penetrator fans are 180mm diameter with the following specifications:

Being a 180mm X 180mm fan set it runs at lower RPM than traditional 120mm and boasts 3 speeds 600, 900, 1200 RPM and the only beef we have with the fans are they are 3 pin and not 4 pin PWM. Most boards can control the fan header voltage but we much prefer 4 pin PWM software controllable. The massive fans have a depth of 33mm which will result in a higher pressure than traditional 25mm fans and the entire SilverStone FT05 has a bottom to top positive air pressure air flow and the dBA level tops out at a mild 34 dBA. We’ll get to it in a second or so but the rear of the chassis looks to have a fan slot but in reality that’s your PSU exhaust. 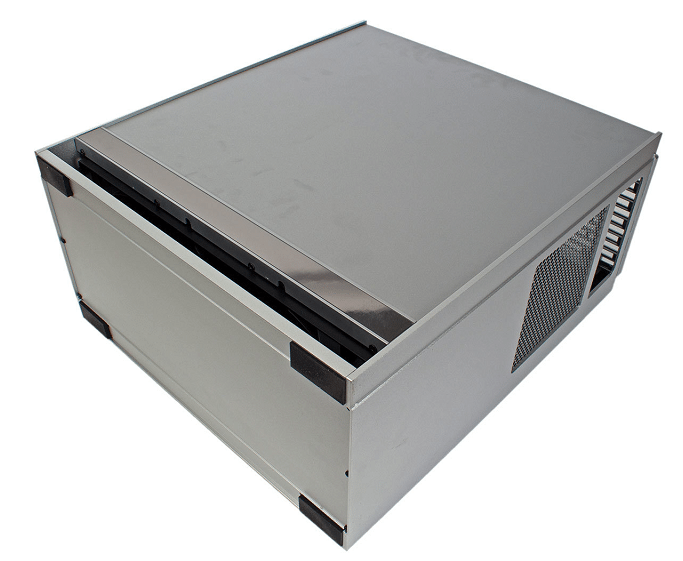 Seen on its side with the rear of the chassis to the right you can see the muted 140mm fan slot with the recessed PSU chamber. You get a glimpse at the thickness of the aluminum on the back panels edge and just a glimpse of the lower filter. We like the overall feel and look of the SilverStone Fortress FT05 but it is reminiscent of older metal server enclosures. 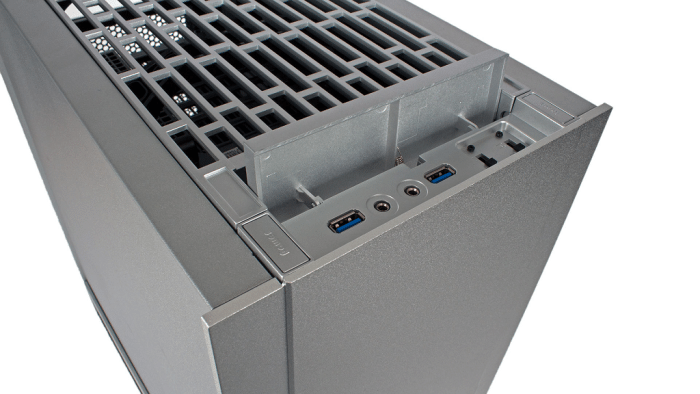 The top of the SilverStone FT05 hides two USB 3.0 slots an audio in and headphone out. The thick grating behind the flip open panel extends the entire length of the chassis and slides back to reveal the I/o ports of your motherboard. 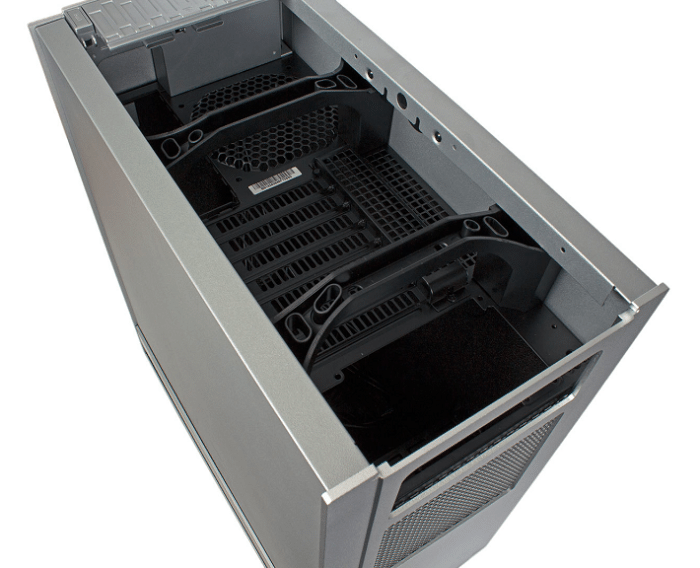 In this shot the rear of the chassis is facing us and the top grating is removed and you can see the expansion port slots and uniquely enough two handles that are plenty sturdy to lift and move the chassis. Your power supply hangs down into the chassis and since this is a mid tower chassis you will need to avoid 180mm PSU and go with a 140mm form factor. The 180mm PSU will fit but you’ll have to remove the interior dual 3 1/2″ platter drive bay to accommodate a Watt Killer sized PSU. No worries stop by SilverStones webby and they have the largest selection of downsized high quality PSU’s in the world. While everyone else is manufacturing huge PSU SIlverStone is re-engineering high quality, tight voltage regulation PSU and quietly revolutionizing the PSU market. 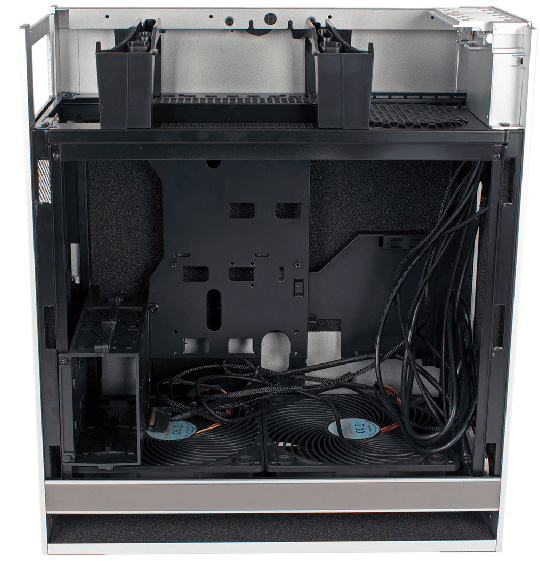 With the top and side (windowed) panel removed you can see the lack of external 5 1/4 inch drive bays and the dual drive 3 1/2 inch interior Platter HD bay. The Dual drive bay partially obscures one of the Air Penetrator fans which means that we will get some airflow over the drives there. We were a little surprised at the ganglion of wires but then we always forget there’s a half a dozen wires hanging in any chassis. We would give a high-end video card to see one chassis with the wires built into the frame and connectors with extensions places precisely where the motherboard headers are. It’s not like they put headers all over boards willy nilly these days, we can predict within a couple of inches where they will be so a “wireless” (interior) chassis is entirely possible and no one has seized on the idea as yet. 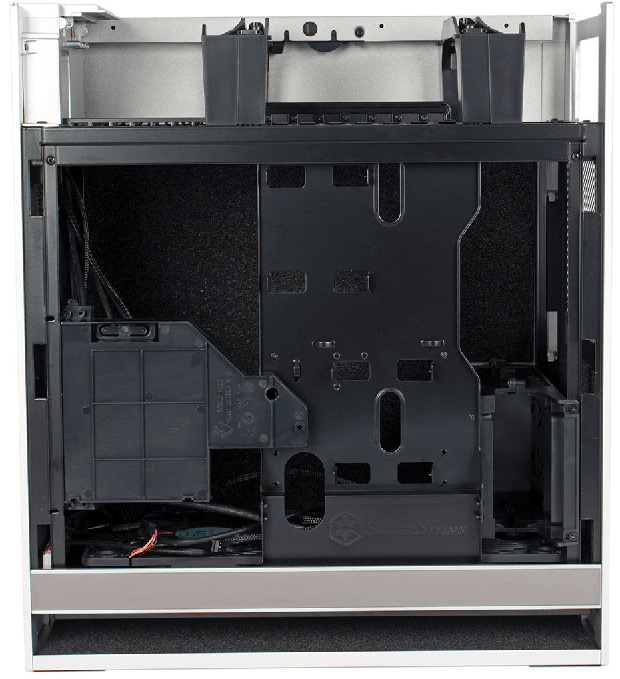 The back panel removed and you can see the side mount for the slot fed SOD02 DVD / CD burner and what passes for a motherboard tray. Most of your wiring is going to be done behind the motherboard and you will need to layer your wires carefully because the thick aluminum chassis isn’t going to bend like traditional chassis doors. 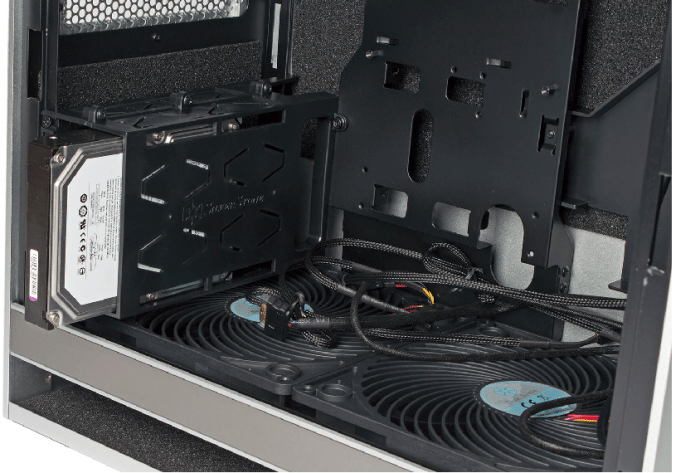 With one 3 1/2 inch drive inserted into the chassis you can get an idea of how compact the SilverStone Fortress FT05 really is. Take a gander at the noise dampening foam used throughout the chassis to keep the noise down. Be warned noise dampening material is traditionally also thermally insulating. With the stack flow design of the SilverStone Fortress and it’s Air Penetrator fans passing heat out the top of the chassis heat buildup shouldn’t be a problem. If needed you can add a 140mm exhaust fan to the rear which we expect most people will do. 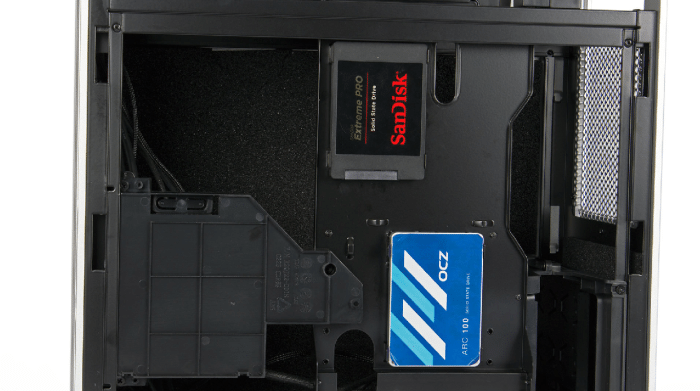 A stealth feature on the back is a couple of SSD mounts which are much appreciated as the well engineered but cramped space will offer challenges for mounting more than two SSD’s. We solved the minor issue by mounting an M.2 drive and a PCI-E Kingston Preditor with no Sata 6 SSD’s what so ever in the chassis. 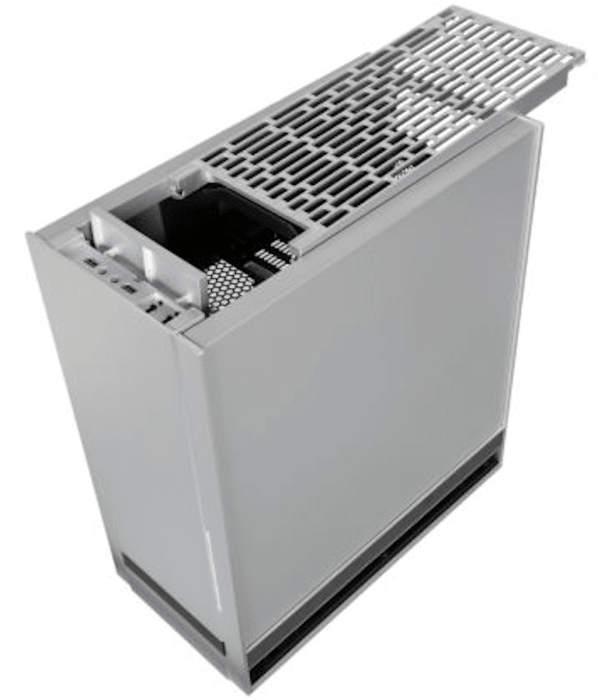 From the top down this is one well-engineered Aluminum chassis. The top slides back smoothly giving you easy access to the 90° rotated motherboard. Any wires you have coming from the top will have to be routed out the back past the PSU chamber. 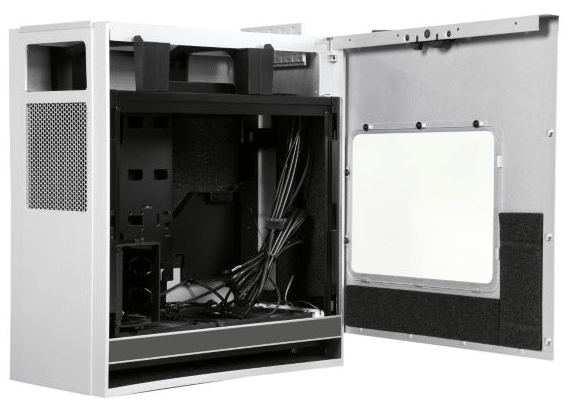 You have to use a little imagination here but your exhaust fan is going to be your PSU fan there’s just no way around it. The PSU hangs face down and exhausts through the mesh, the PSU cord video card cord, mouse and keyboard cords all come out on top the PSU and down past the mesh the PSU exhausts through. There are a myriad of advantages to a rotated motherboard, mainly easy top access to ports, but so far every chassis we’ve seen with rotated motherboards you have a roosters tail of wires stringing out of the rear top. 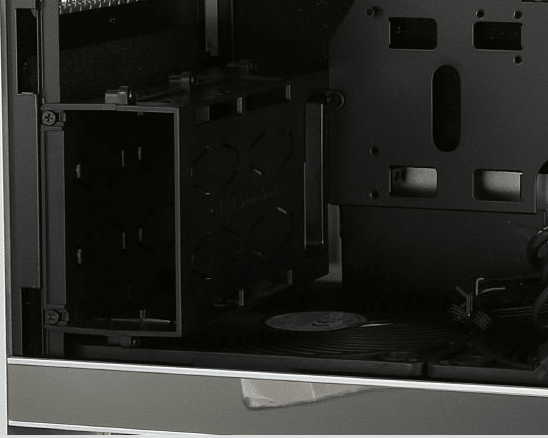 Everything has its place in the SilverStone Fortress FT05 and the 3 1/2 inch platter drives have a dual internal bay. As previously mentioned if you want to use a massive watt monster in the Fortress you may need to remove the drive bay so choose carefully. 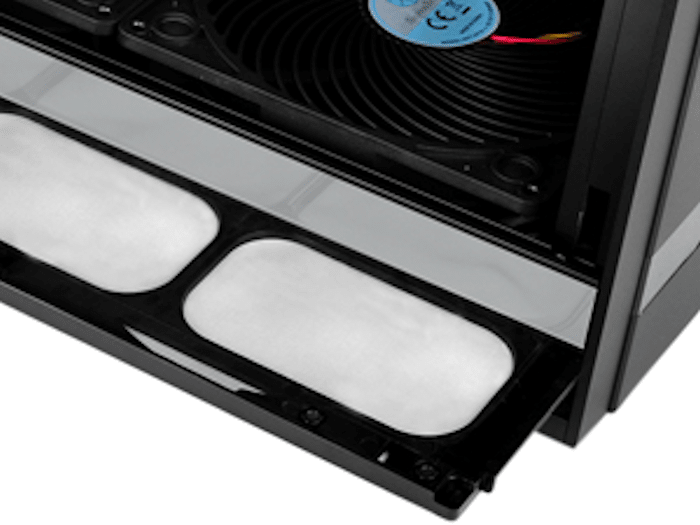 The two Air Penetrator fans are covered by the lower (magnetic) filter and it’s easily removable and easy to clean. Just another of SilverStones well thought out extras. 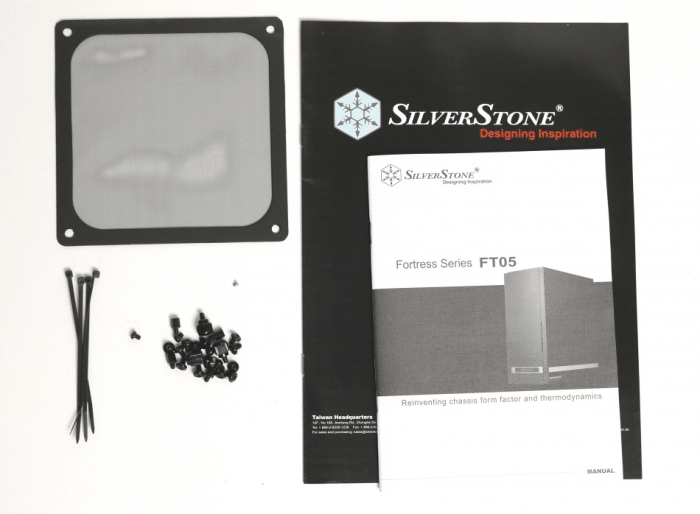 The bundle on the SilverStone Fortress FT05 is short sweet and to the point. You get a PSU vent filter. some screws, a few cable ties and the books. Considering the price a few velcro straps would have been appreciated and eased the wiring by providing testable wiring routes.

The SilverStone Fortress FT05 is an Elegantly built and engineered chassis that is sure to turn heads.