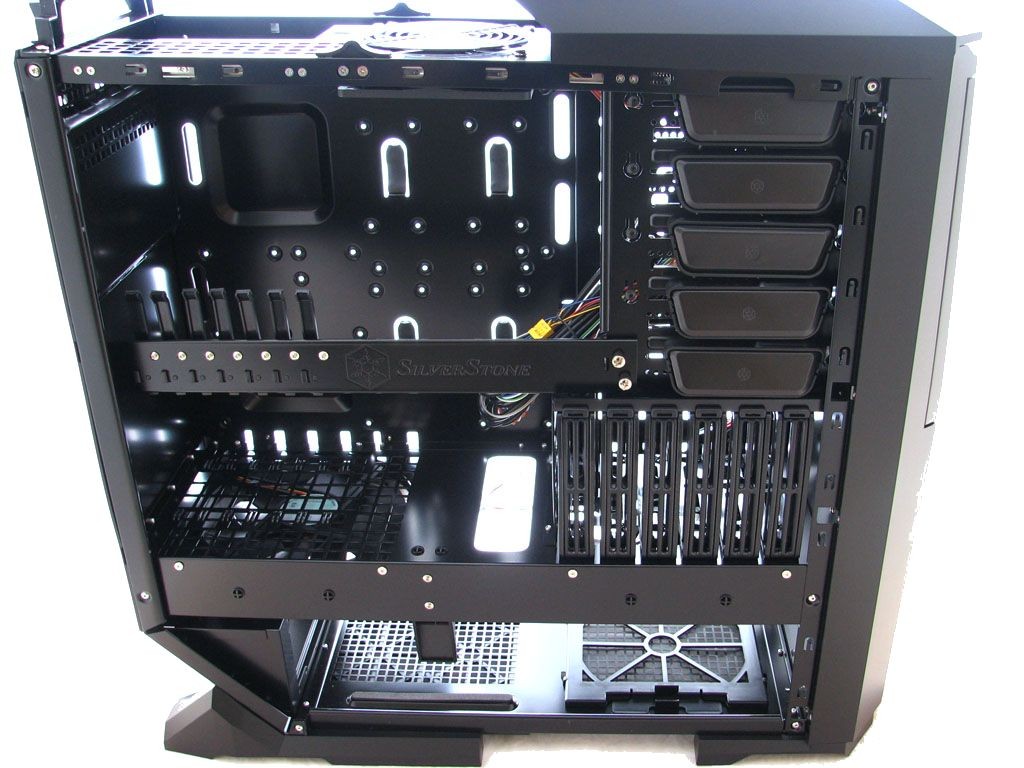 Looking at the full interior view of the SIlverStone Raven RV01 a few cabling amenities have been added to the mix: some almost too narrow slots with grommets to protect the wires. One tip we can give you on cabling the Raven is at some point you will probably have to remove a grommet and use some black duct tape to line the edges. Another option is to remove the grommet and feed the wires through the grommet then replace the grommet with the wires already in place.

The vertical tabs in the back are for holding the wires on the back in place and we found them handy preventing clusters of wire that could potentially bow the panel on the back side of the chassis. 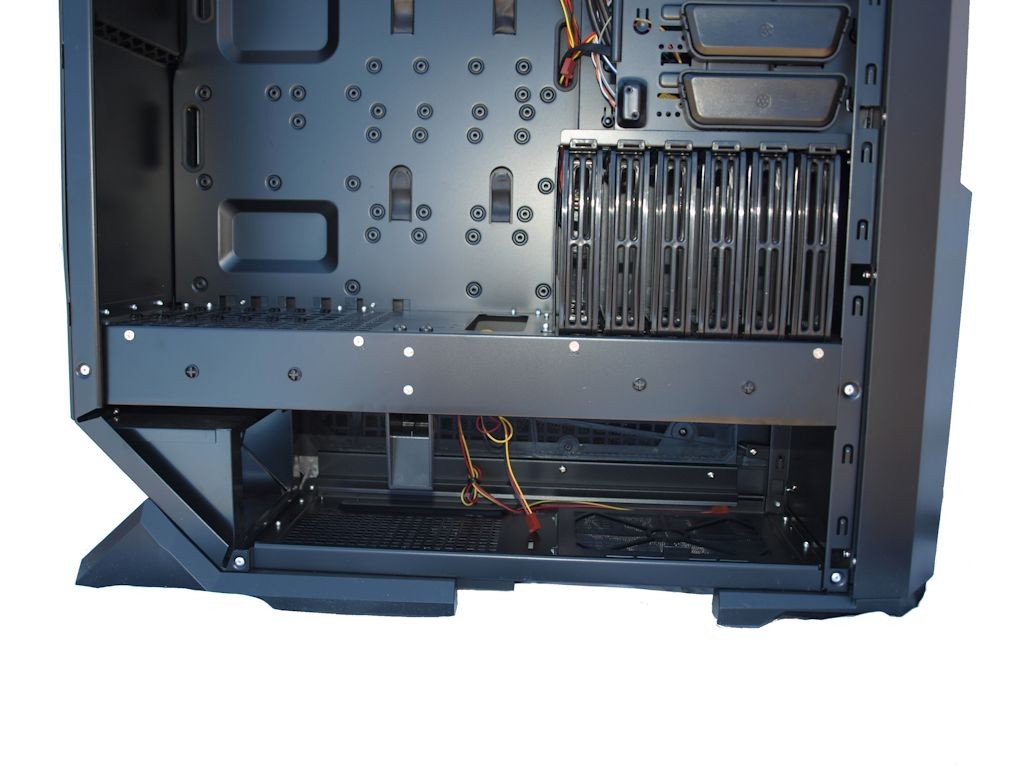 The Raven is a bottom mount power supply chassis and SilverStone threw in padding for a normal sized ATX power supply. Of course we didn’t use a normal sized power supply, that would be too easy, so we went with a SilverStone ST1500 1500w power supply fully capable of browning out entire neighborhoods when under heavy load. Notice the bottom left of the chassis a recessed slot for your power supply protecting the cord and keeping your PSU out of harms way during moving the behemoth chassis. 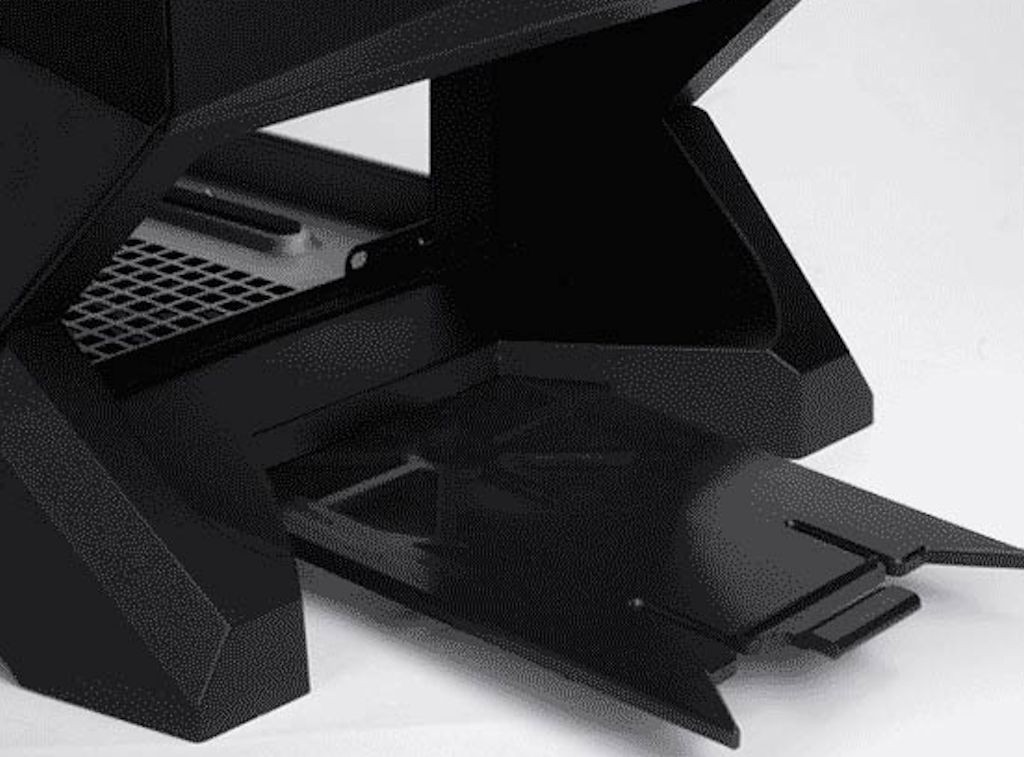 Looking into the PSU chamber we find a removable filter suitable for running under water or brushing off to clean. Given the general updraft stack cooling on the Raven this is a feature we all will come to appreciate. 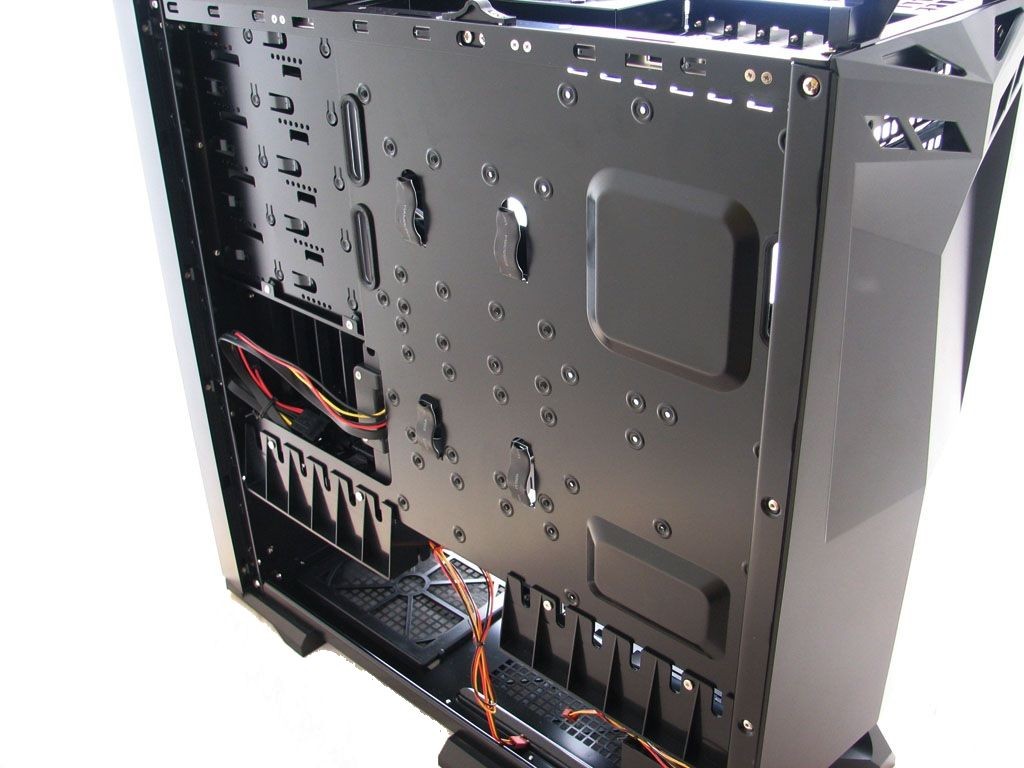 The back side of the motherboard tray (non-removable) shows the wiring amenities to be a little sparse but there’s a little niggle room (Niggle – To pester someone or be annoying or uncomfortable in a persistent way). You will find niggle is a good term to describe the wiring of the Raven RV01 chassis, it can be done elegantly but with the update on the Raven a little more consideration could be given to wiring amenities.

While we are looking at the Raven from this perspective take a look at the back of the Raven. Since the motherboard is mounted 90 degrees off “Normal” and the I/O plate faces the ceiling the back of the Raven was left an open palate to sculpt more Fighter Jet like designs and SilverStone took advantage of that. 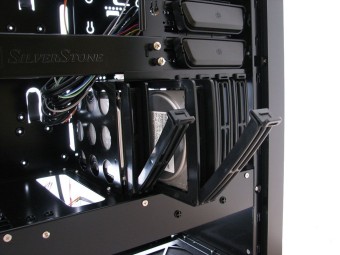 We mentioned earlier that the SilverStone Raven RV01 has five external 5 1/4 inch drive bays but it also has 6 internal 3 1/2 or 2 1/2 tool-less internal drive bays. Three and one half inch drives fit nicely and we didn’t feel the need for screws, the rubber vibration dampening grommets keep the drives firmly in place.  With the increase in SSD usage the inclusion of 6 fully SSD capable drive bays is very appreciated. For some odd reason some modern chassis still seem to shun SSD placement. Often there’s just one retrofitted 2 1/2 inch drive accommodation and your left going to the bank account to purchase additional adapters. While you do have to use 4 screws to mount the SSD’s the SilverStone Raven RV01 will accommodate 6 without additional adapter purchase. 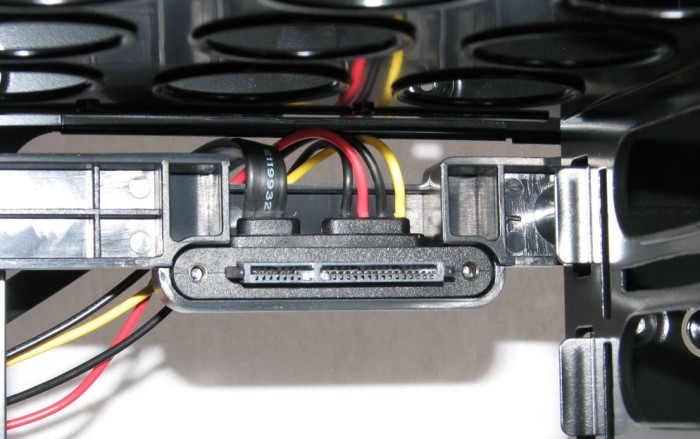 The first internal drive bay includes a hot swappable module but that’s the only bay that does have a hot swap module. Additional modules are purchasable from SilverStone by Googling CP05-SAS.  While the model name contains “SAS” the hot swap addon is SAS and SATA 6G compatible and contains two 2200μF capacitors for stabilizing +12V and +5V voltages. We did find two Molex connectors lingering in the Raven RV01, one connected to the hot swap adapter and another to the chassis light on the front. While Molex has been around forever it’s about time manufacturers include a SATA to Molex adapter or two if they choose to use the legacy power interface. Perhaps end users need to start a “Kill the Molex” grass-roots movement, we could always name it “Whacka Molex”. 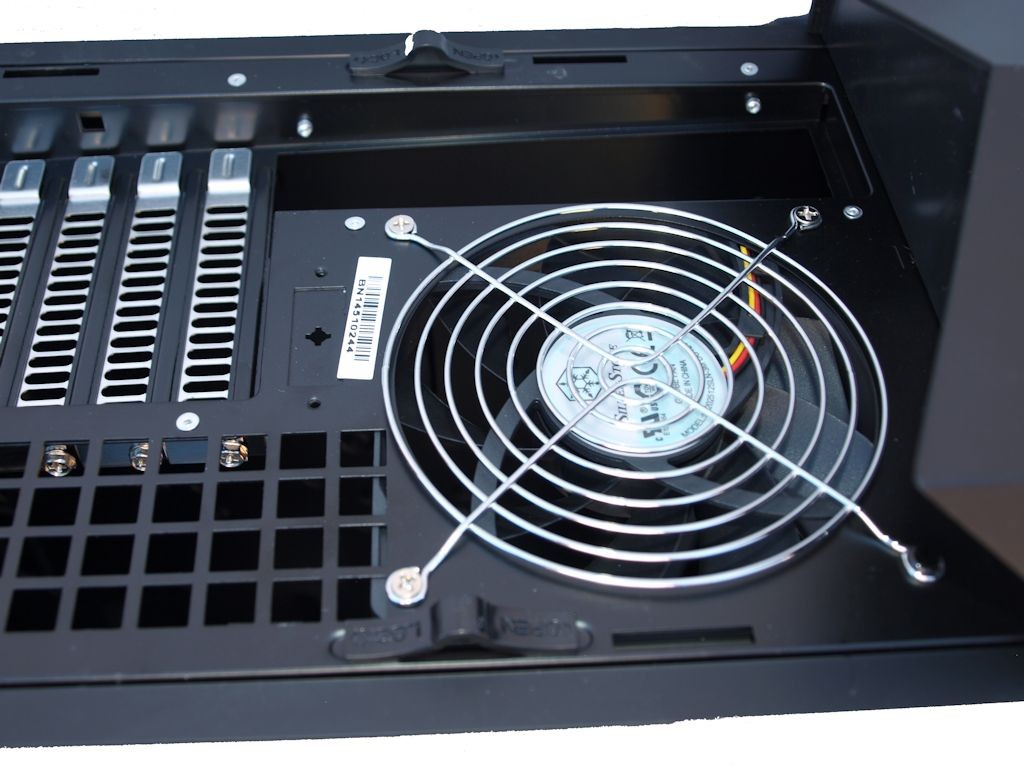 The SilverStone Raven uses a positive pressure airflow system with two bottom 180mm low RPM (700 RPM at 18dBA) fans and the top fan (pictured here) a 120mm 950 RPM 18dBA fan. The entire airflow system is designed to drive heat out the top of the Raven RV01 and it does so quite effectively.  Cool air is drawn in through the bottom of the Raven and pushed across heated components and exhausted out the top using the natural tendency of hot air to rise. In addition to the cooling system the GPU vents out the top and properly mounted an air CPU cooler can exhaust out the top as well keeping the chassis cool and providing a good hand warmer in the winter. 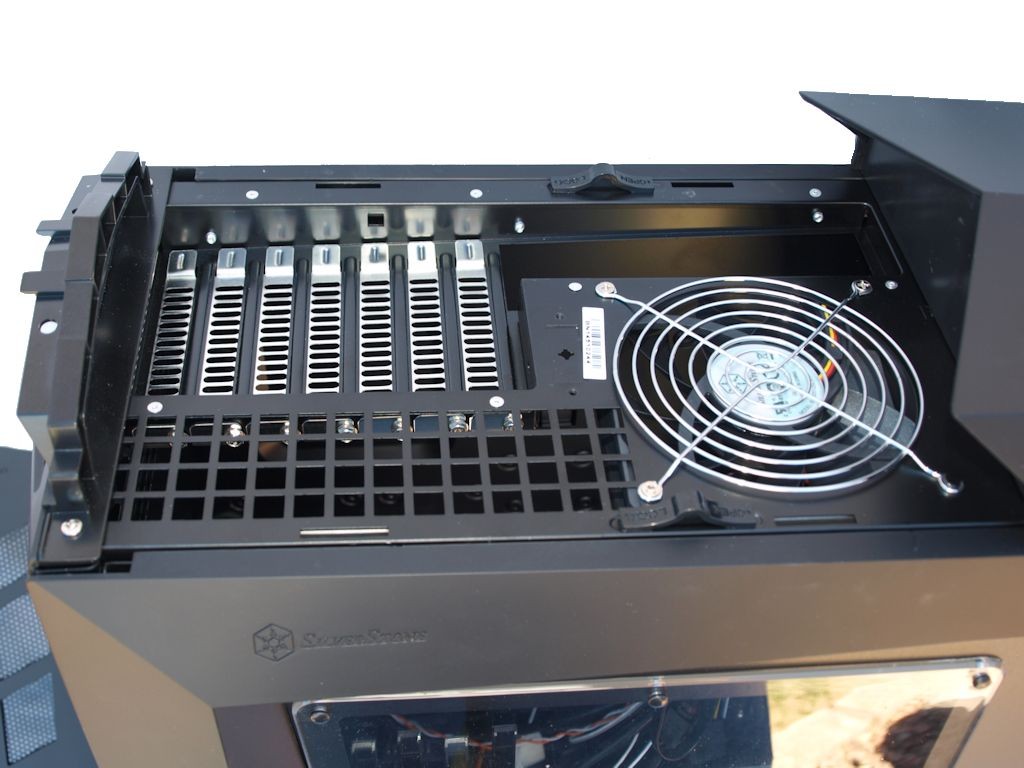 Seen in its entirety after removing the top cowling the entire top of the Raven is designed for updraft heat venting. The 120mm fan assists in directing the heat flow but the expansion ports are slotted to release heat and the chassis itself is vented to release more heat. You may only gain a few degrees drop in internal chassis temperature but every degree is more overclocking headroom and frankly cooler components last longer. In our lab being smack in the middle of the Sonoran Desert every saved degree is much appreciated. 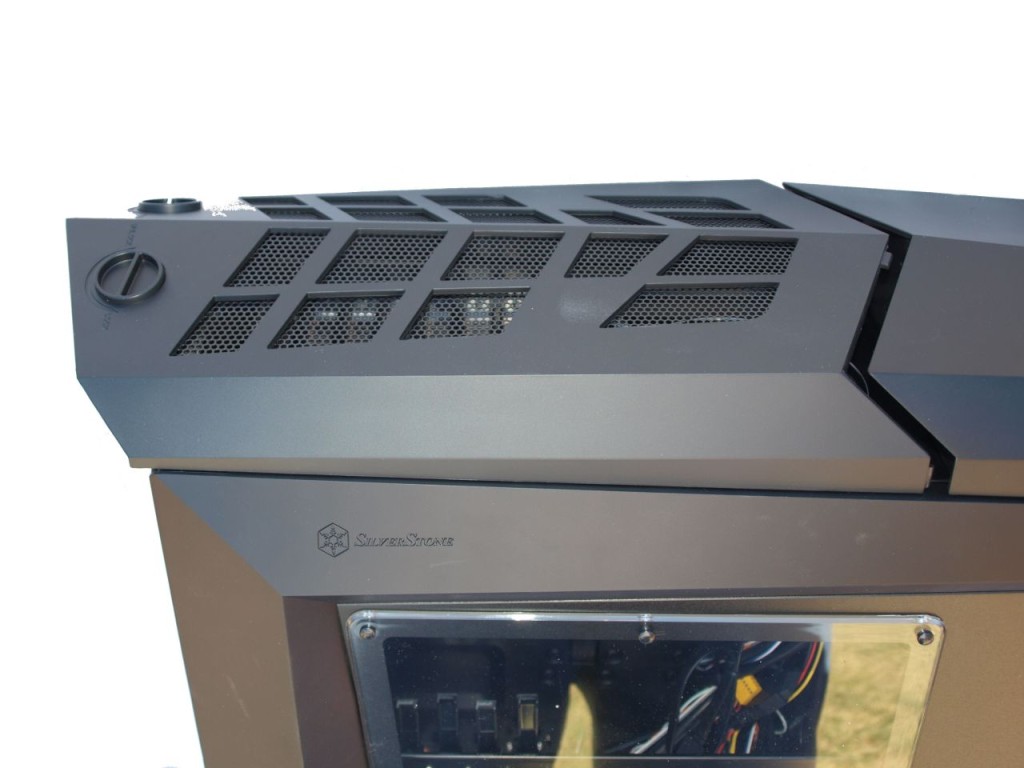 The top cowling is fitted with metal mesh to let heat out while keeping debris from getting to the top exposed I/O portion of the motherboard. Notice the two knobs on the left of the cowling those are the cowling release mechanism and one of the two true complaints we have about the chassis. You turn both knobs (dials) toward the center in the unlock position and pull back on the cowling and it comes off, theoretically. The mechanism is over engineered and after 45 minutes of struggling we got the cowling open. Yes we read the manual and went online and looked but the cowling was difficult to remove every time we tried. A simple pressure switch inside the cowlings rear opening would have prevented the over engineered latch release. All that being said the somewhat hard to remove cowling adds a lot of visible style and makes reaching expansion ports and the I/O plate a lot easier. 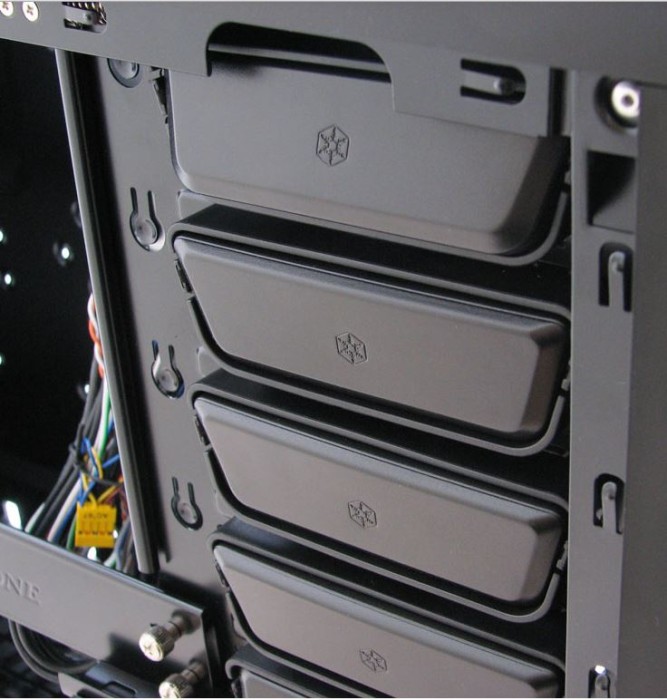 SilverStone chose a tool-less 5 1/2 inch external drive bay setup that shows us how much thought went into this timelessly stylish chassis. Many too-less drive bays are flimsy and leave optical drives fairly insecure and they tend to move when you insert disks, Any chassis that boasts tool-less drive bays and leaves drives vibrating and easy to move inserting disks automatically gets docked major points. You’ll be glad to know that the Silverstove Raven RV01 lost no points on the tool-less drive bays. We loaded the chassis down with drives (2 SSD’s, one 3 1/2 platter drive and two 5 1/4 optical drives.. All of the drives are rock solid mounted yet the vibration reduction technology in the Raven RV01 is really excellent and the entire chassis is Stealth whisper quiet. Whisper quiet with good cooling properties earns the Raven bonus points. 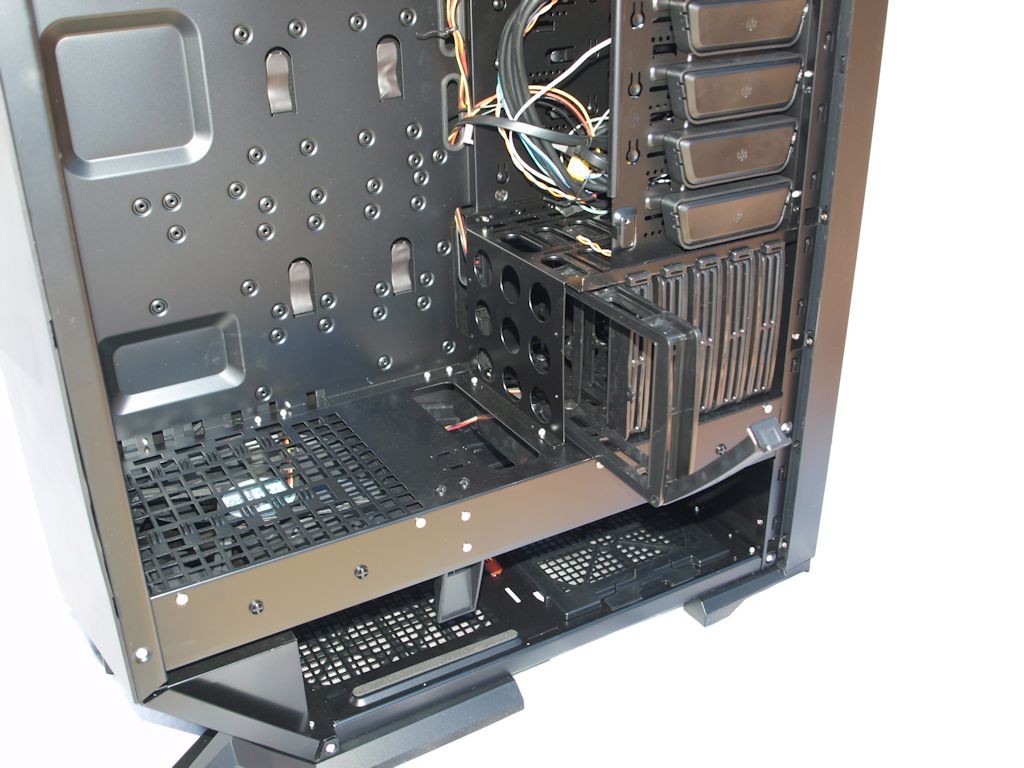 We tossed in this shot so you can see the knot of wires that come with the Raven, the only one you may not use is the 1394 Firewire which isn’t put on many motherboards these days but the rest will need to be used and tucked away neatly. Figure 3 wires for the front panel, one for the front light, Firewire, Dual USB 3.0 for the front and the audio cable. Top that spaghetti off with the 10 additional wires we used for drives, a main connector, CPU power connector and GPU wires and you have quite the wiring challenge. That’s about 21 wires depending on your GPU setup, ours is a single 8 pin GTX 960 by EVGA but shortly that will be SLI or another card to handle physics. Quite the wiring challenge by anyone’s standards.