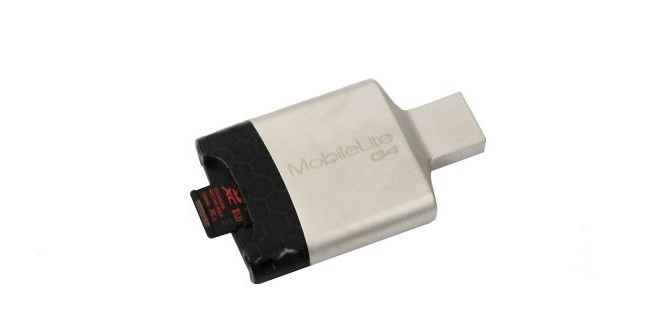 I am not going to include my current computer system specifications, because the USB 3 interface does operate very similar to one another; whether you have a 300 USD laptop, or a 6000 USD computer it all operates at the same speed. I will be testing the micro-SD card with the Kingston Technologies MobileLite G4 media reader.
I will be including the micro-SD card testing with my Dell Venue Windows 8.1 Tablet. Again it is here just to give you an idea of what it is capable of doing in a tablet/phone. 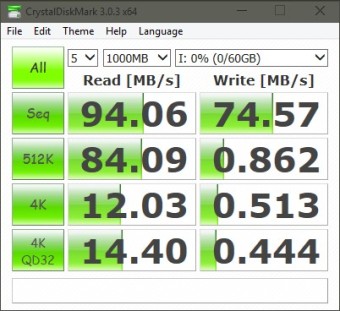 Looking at our Crystal Disk Mark 3 benchmark, we can see this micro-SD card is performing about right on par to what Kingston Technologies rates this devices speed at. I am not going to be picky about a few MB/s here and there, considering you wouldn’t really notice the difference.

HDTune
Unfortunately, I was unable to do a write test of HDTune onto this storage device. From some odd reasoning I couldn’t delete the partition in order to test the write speeds with HDTune. 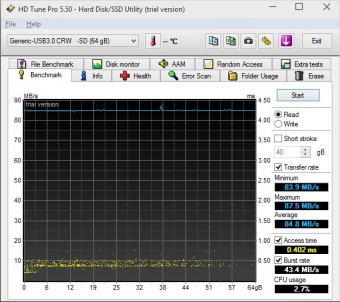 HDTune testing confirms that this micro-SD card is performing right on par. In the graph, this is one of the few times I have ever seen a micro-SD have such a flat data line, very little ups and down on its performance measurement. I am curious as to how this drive handles real world testing next.

TeraCopy
For TeraCopy testing, this will give us a more accurate measurement of the performance that this micro-SD card will have. I will be listing both write and read speeds of 4.17GBs of MP3s. These files range anywhere from a few bytes to 20MBs and are not in sequential order; this should give us a good idea on what we should be expecting from the micro-SD 64GBs storage device alongside using the MobileLite G4 media reader.

This is the results of the write testing with TeraCopy. As we can tell, it did not take very long, 58 seconds to be more precise, to move 4.17GBs of MP3s from my computer.

The read portion of testing with TeraCopy, looking at the final result of moving 4.17GBs of MP3s, it only took my computer 56 seconds to move my music over from this storage device.
Looking at these two results of TeraCopy and the time it took to move the same amount of files, there is not much a difference from read and write speeds of this micro-SD card. Which is telling me again that this storage device is performing right on par to what Kingston Technologies specified right on the packaging of the micro-SD card itself; as well as, the MobileLite G4 media reader did not hinder any performance of this micro-SD card at all. 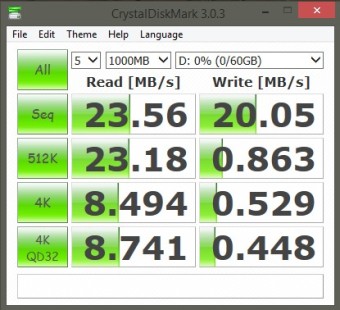 Umm, not sure what to make of this result; but, wow, I did not realize that I would take such a hit on performance while using the internal micro-SD reader on my Windows 8.1 Tablet.

Please keep in mind that Tablet Computers are slimmed down versions of our desktop/Laptop based computer systems. Because of the size constraints, and battery life limitations will result in somewhat slower performance then their larger counter parts. This is just thrown in here to give you an idea of what to expect from a Tablet based computer system.

The MobileLite G4 media Reader with the 64GBs micro SD card makes for a perfect companion for our mobile electronic devices, such as our phones/tablets, and also to include our media recording electronic devices.

The MobileLite G4 media Reader with the 64GBs micro SD card makes for a perfect companion for our mobile electronic devices, such as our phones/tablets, and also to include our media recording electronic devices.