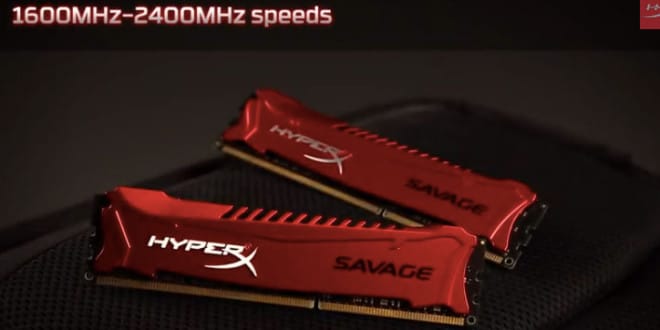 Over the years, Kingston has not only kept the HyperX brand for their performance memory modules but also expanded the brand to other products such as the performance SSDs, USB drives, gaming headsets, and other computer related peripheral. 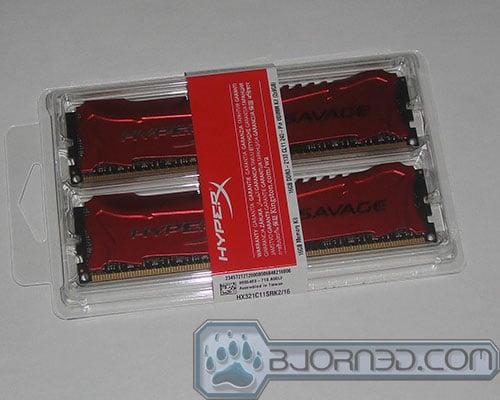 Currently, Kingston HyperX memory modules features four lines of products: Fury, Savage, Predator, and Impact. The Fury and Savage are aimed for mainstream market while the Predator is aimed for the extreme overclockers. Unlike the Predator that comes with a large heat spreader and clockspeed up to 2800MHz, both the Fury and Savage features standard size heat spreader. As you may expect, the Fury and the Savage are clocked at slightly lower speed than the Predator where we can find the Fury clocked at speed up to 1866MHz and the Savage at clockspeed up to 2400 MHz. Today, we have gotten the 2133MHz Savage that we will put it through our tests.

Featuring bright metallic red heat spreader and the black PCB, the Savage is certainly attractive. The heat spreader is asymmetrical design made with high quality aluminum with a diamond cut finish. The design of the heats spreader mimics the Savage name where it looks a little like a cat ready to pounce to give it a bit of the flare and conveys the concept that the memory meant to give you the extra performance. The low profile and asymmetrical design heat spreader not only helps with the heat dissipation but it also allows the memory modules to fit into any system. Wether you are using a tight-spaced mini-ITX system or a system with an over-sized CPU coolers, the Savage would not have any clearance issue.

Because of the thick aluminum, the Savage is definitely heavier compared to the run of the mill modules with thin aluminum heat-spreader. Still it is not as heavy as the over-sized heat-spreader that you found on the extreme overclocking modules. The added weight makes the Savage feels that it has a very solid build and premium.

The Savage will be available in 4GB to 8GB per module and 8GB to 32GB kit. It will support dual or quad channel. So, it essentially will work with any Intel or AMD system that uses DDR3 memory. The official specification listed support for Intel 6, 7, 8, and 9 series chipset. If you got one of the AMD systems, then you would be able to install Savage in FM1, FM2, and FM2+ system as well as the E35 chipset. Interestingly, for the AMD system, the official specification does not include the AMD enthusiast AM3+ platform. Though we doubt it would have any issues. 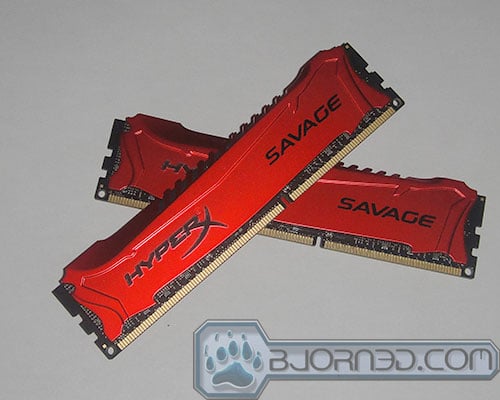 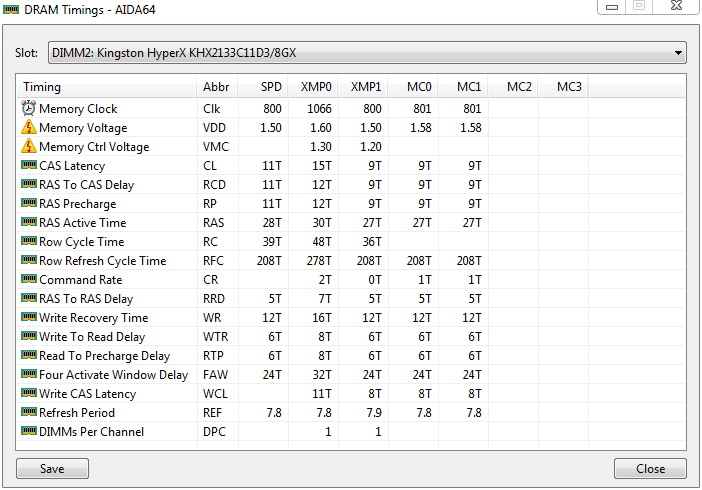 Kingston backs the Savage with limited lifetime warranty and the company offers advanced replacement which is a nice feature if you ever find yourself in a need to have a unit replaced. Our 16GB DDR3-2133 modules is retailed at $160 on Newegg. 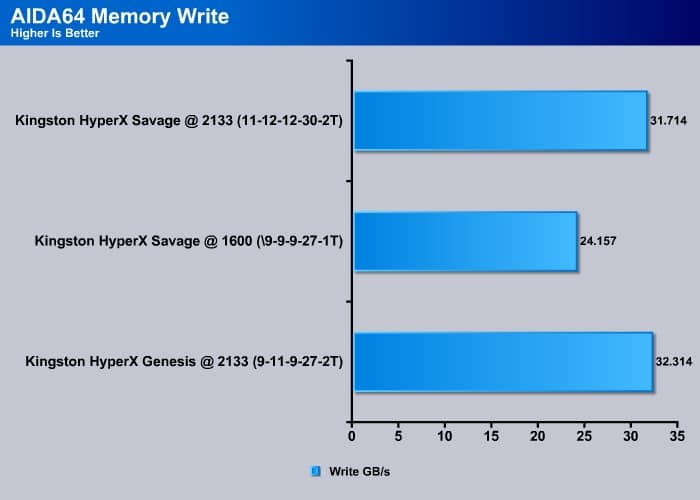 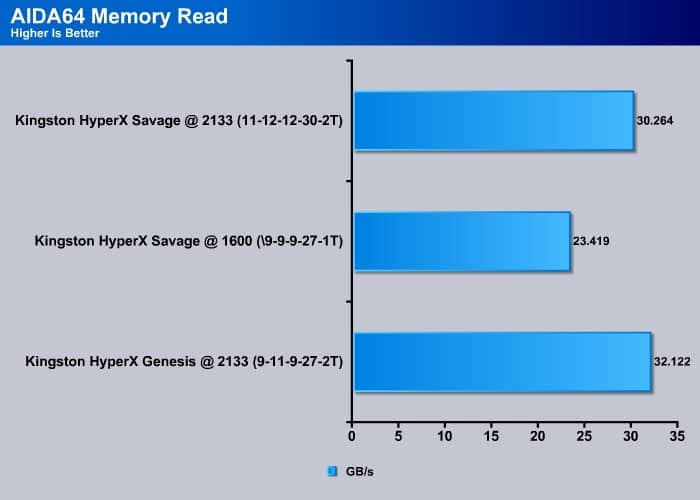 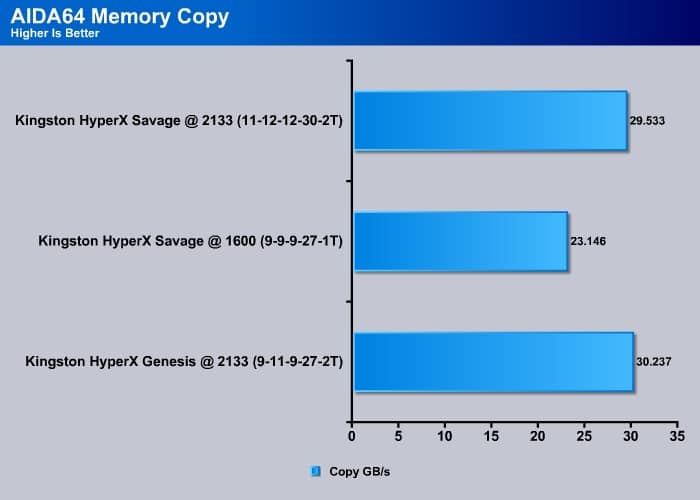 The HyperX Savage XMP profile runs the memory at 9-9-9-27-1T at 1600 MHz. However, at 2133MHz, the memory timing is set to 11-12-12-30-2T. This is not as tight as other memory modules and synthetic benchmark like AIDA 64 shows that there is marginal difference between the two timing. The read is where the difference in the performance where the tighter timing has about 5% higher transfer bandwidth. 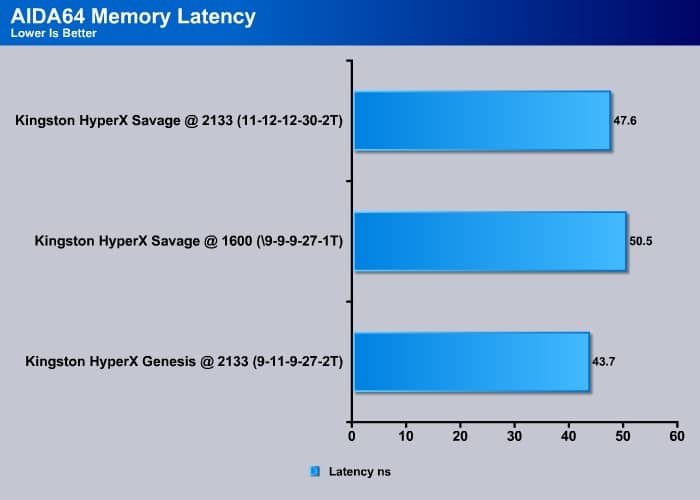 The Savage is 4ns slower than the Genesis. 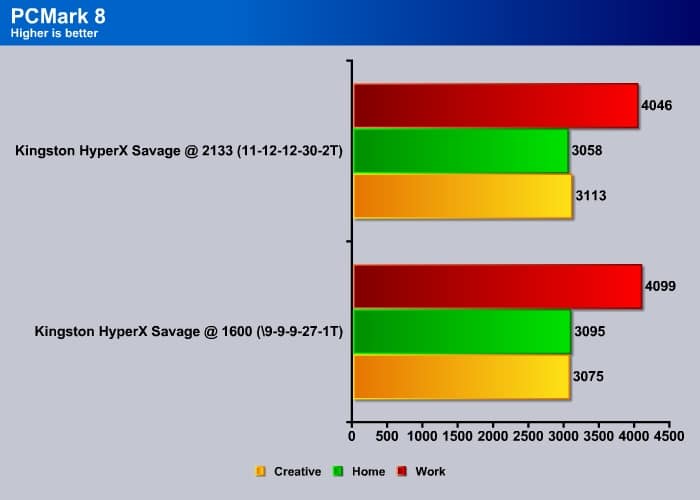 We tested PCMark 8 with the integrated graphics since it would benefit the most with faster speed memory. PCMark 8 shows us how would the difference in the memory speed would affect the overall system performance. As you can see, the Creative workload shows the greatest gain of 38 points, or 1%. PCMark. the Creative workload utilize the GPU the most and hence it would benefit from higher memory speed. 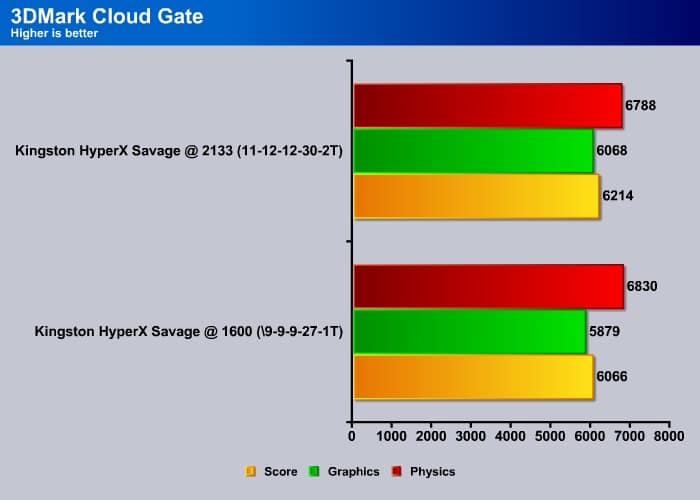 3DMark also shows that we gain 3% in the performance with the memory running at 2133 as oppose to 1600 MHz.

Kingston memory has always proven to be reliable. The HyperX Savage is no exception. While the memory may not have fastest clockspeed or the tightest timing, it is certainly capable of deliver good performance. Due to the integrated memory controller on both AMD and Intel CPUs, the impact from the speed of the memory is not as big as it used to be. While synthetic benchmarks like AIDA would show the difference, real-world performance is marginal where the timing of the RAM has greater impact than the clockspeed. Even so, the difference is not as big as you would expect.

The HyperX Savage stands out among its competitors with the asymmetrical head spreader that is low profile so it is both practical and pleasing to the eyes. The fact that it is heavier than your run of mill memory modules also makes it feel that it is high quality and not easily break. Many high speed memory modules comes with taller heat spreader that often is not ideal for the growing trends of mini-ITX and small form factor PCs. So the fact that HyperX Savage stayed with low profile heat spreader makes it ideal for not just enthusiasts but also people who are looking for a high capacity memory module in theirwe are glad to see Kingston delivers a good perform

Retailed at 159.99 for our 2x8GB modules, the price for the HyperX Savage is comparable to other 16GB dual channel kits on the market. It is backed with the limited lifetime warranty. A neat thing with Kingston’s warranty service is the cross-ship option so that you can have your replacement unit shipped to you before you have to send in the defective unit. Just a few month ago, I had to contact Kingston for an warranty replacement of an microSD card and the whole process is painless. Also, I was always able to reach a live person when I call them after a few minutes of wait time. If you ever need to have anything replaced, you would definitely appreciate the cross-ship option so you have the least amount of down time.