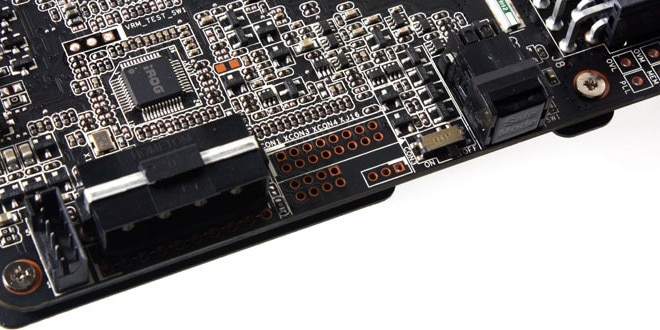 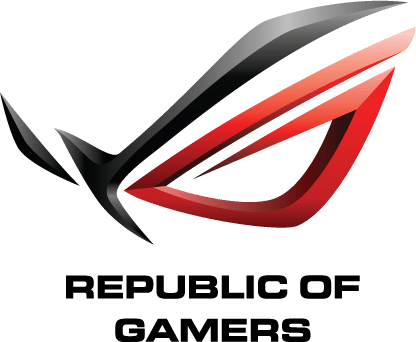 I love looking at new cards and most are minor upgrades to the reference model while others are a bit better with custom PCBs and some minor trickery to help performance. Some are simply balls to the walls complete ground up builds made specifically for pushing the limits, and today that’s what we have. ASUS always aims to impress with its top model ROG based overclocking cards and the last few Matrix cards we have seen have been very impressive, so needless to say when I had the GTX 980 variant show up I was elated and very anxious to get to running it.

One thing up front is that while this card comes with an air cooler this card and cards like it are designed to really push the limit of a specific platform or GPU model so the real target would be LN2 testing but as that group is extremely niche we have to look at it under real world application and expectations. Our testing and analysis will be on its stock air cooling and if we can round up a waterblock we will be sure to follow up with another performance analysis with that as well. 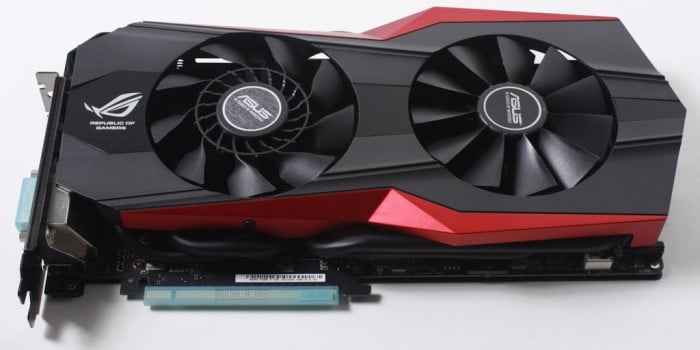 The ASUS Matrix GTX 980 card comes to market at $659.99 at Newegg at the time of this writing. This places the Matrix at around 100 dollars more than the lowest priced model but still below the EVGA classified by about 40 bucks. And truth be told in terms of feature sets it would be a three-way battle between the Zotac AMP Extreme EVGA Classified and the ASUS Matrix as MSI has not released a Lightning model to date. So with that being said the Matrix is not too far off being about 40 dollars over the AMP Extreme and 40 under the Classified it really is not that bad of a buy if this card has the features you need. Now lets take a look at that. 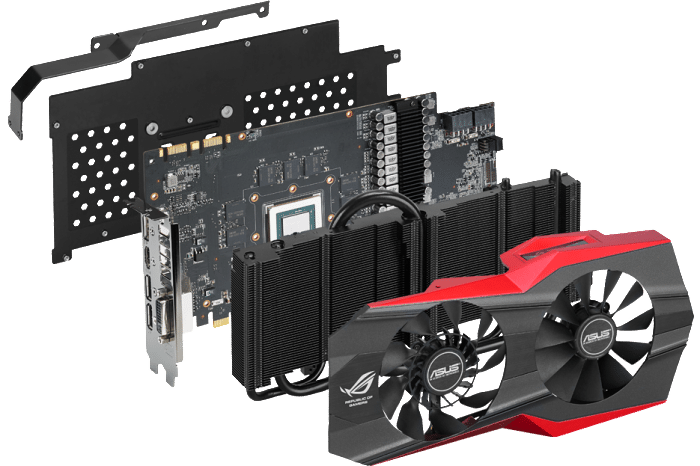 Here you can see an exploded view of the main components that make up a Matrix card.

Now you can see there are many layers that all combine together to make one rigid and monstrous card, now lets dig a bit further. 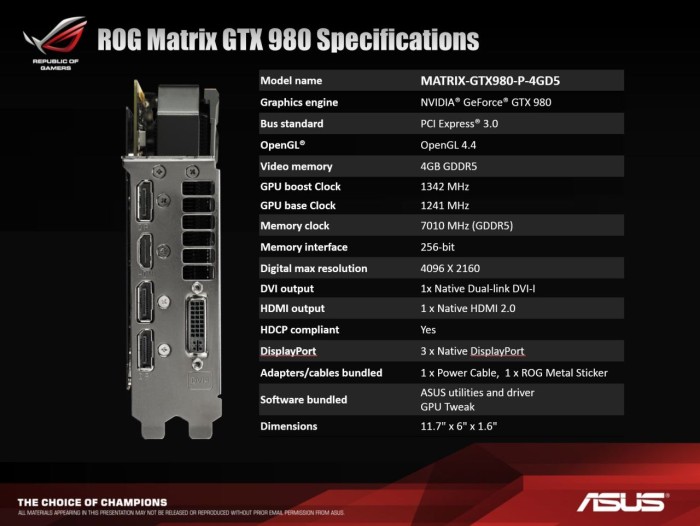 Here we have the Specifications as supplied by ASUS. The stock clocks of the card are pretty high but when comparing to overclocks on other models out on the market it is beaten by quite a few and bested by both the AMP Extreme and the Classified, and truth be told many of the EVGA models come out of the box clocked higher.

This is not to say the card is not capable for more but I wish ASUS would release the card with more aggressive clocks to match others on the market so that out of the box they can compete.

More Performance out of the box 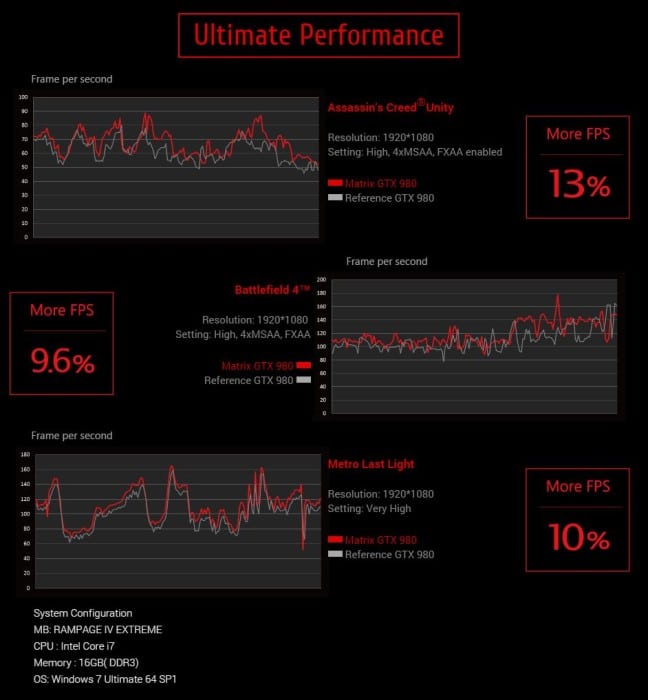 Here when compared to a reference clocked 980 we can see that you get some definite performance gains across multiple popular titles averaging over 10% in average FPS. 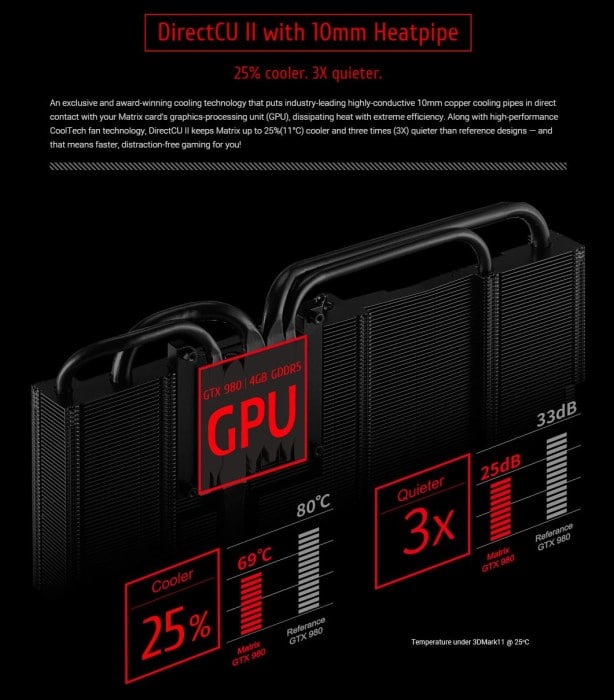 ASUS employs a massive 10mm copper heatpipe to help pull heat away from the 980 GPU which is nice as it means you can stay nice and cool which should help with overclock stability. Maxwell already is known to be a cool running GPU so this just sweetens the pot.

ASUS Introduced the CoolTech fan which is basically a blower fan making up the hub of a standard twisted blade fan, and the idea is actually pretty cool and seems to work very well to push heat out radially rather than down onto the PCB helping to hopefully force more out the back and not thru the cooler and back into the chassis. 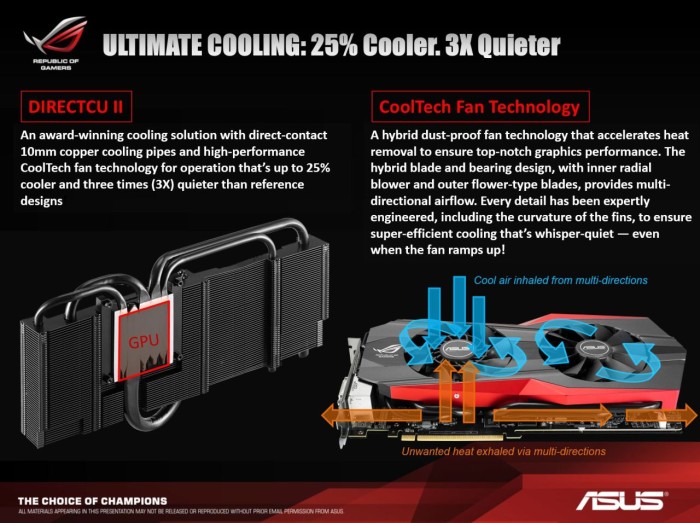 ASUS Supplied this info which shows in visuals what I was explaining above which is how the fans work together to push the air out and away from the card which is important to keep the card cool as during longer gaming sessions or sustained loading the heat will simply build up if not removed effectively. 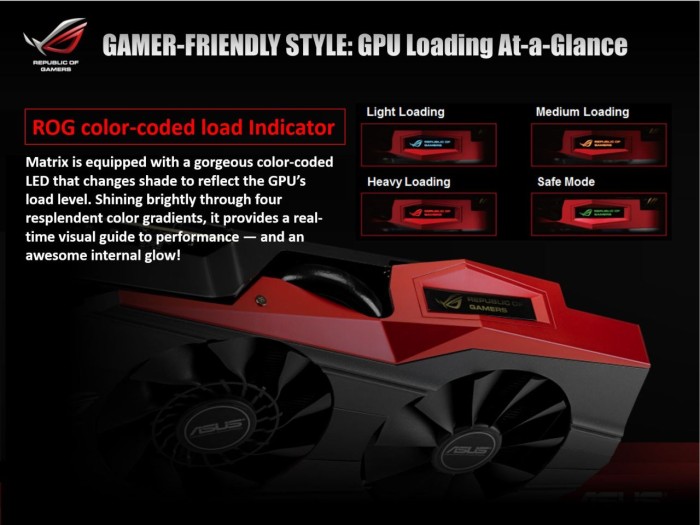 ASUS also shows a neat little trick which has been around a few matrix generations now with the logo lighting up and changing color to indicate loading. This is cool as it adds a nice effect for a windowed chassis and with a multi card system I could imagine it would make for quite the light show. For benching we pretty much know during a run it will be in the red but it’s still a novel idea and when running LN2 I would be tempted to take the LED plate from the cooler and leave it connected just to see it change colors under extreme loading. 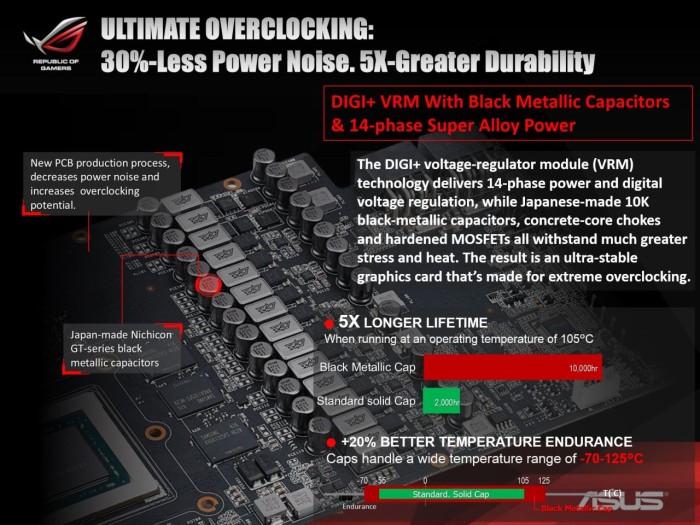 ASUS built a major VRM on the Matrix card with full digitally controlled 14 phase DIGI+ components. This means ultimately there should be no need for extra power cards or components to make this card fly, it is simply built to handle the load as it comes. 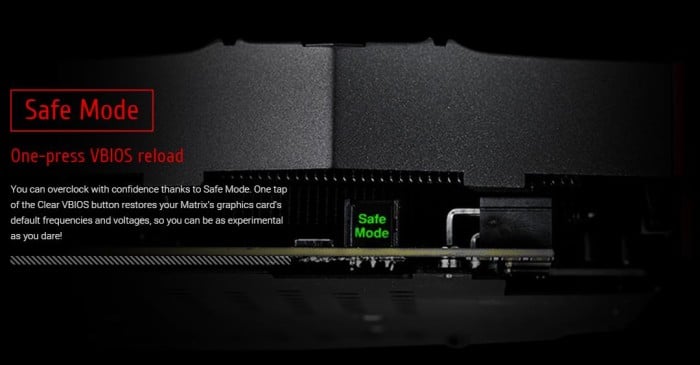 The Matrix has a “Safe Mode” Switch which allows complete default of the BIOS should you push too far so that you don’t have to worry about rendering the card unusable when pushing for the best settings. 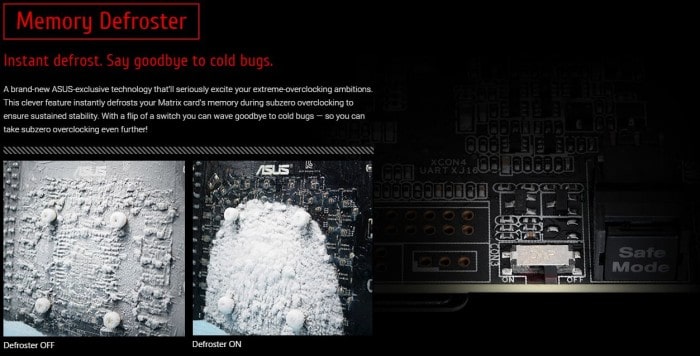 The Memory defrost feature is very interesting as it uses a 4 Pin PATA connector at the end of the card and a flippable switch to actually heat the memory area on the card avoiding freeze up and cold bugging as the memory can bug much quicker than the GPU in many cases. By adding this heater you can bench and push the card harder while avoiding cold issues.

ASUS like every other GPU partner offers its own spin on GPU tuning software and with cards like the matrix has some serious tweakability built-in. 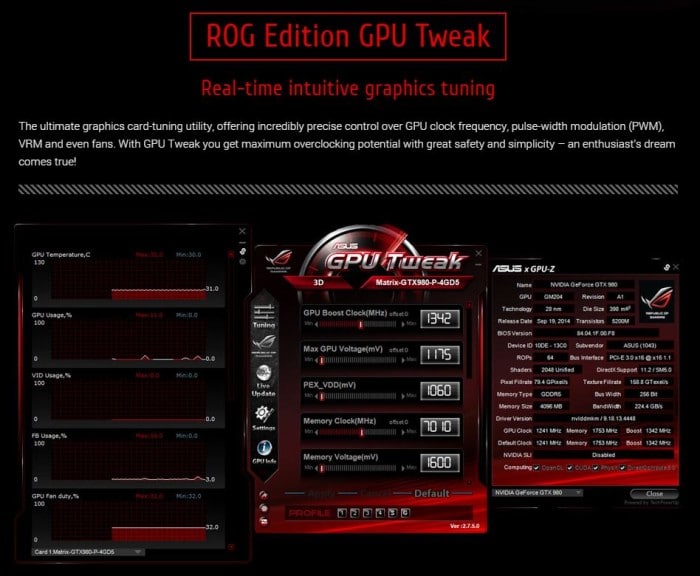 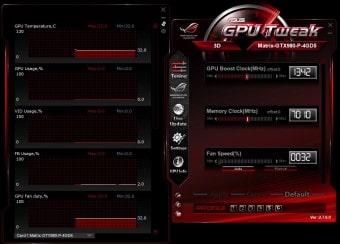 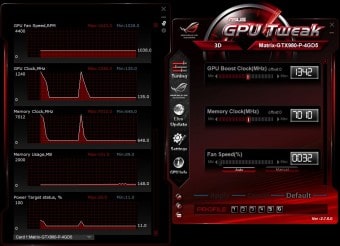 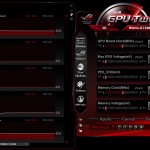 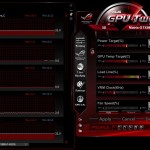 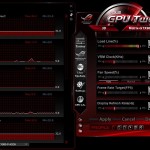 Above you can see that once in advanced mode the amount of tuning options enhances drastically. Although much higher voltage settings will require a hard mod to the card itself which I will show you soon. 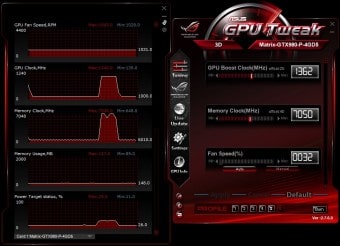 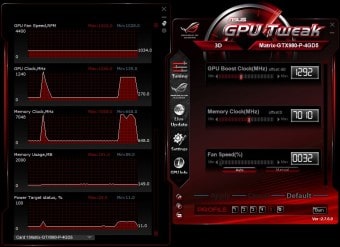 Here you can see what happens when pressing the G or S button to the right of the main presets at the bottom of the App. the G profile makes a small overclock to the GPU and memory or “Gamer” profile, while the other lowers clocks a bit to save power or the “Saver” profile. 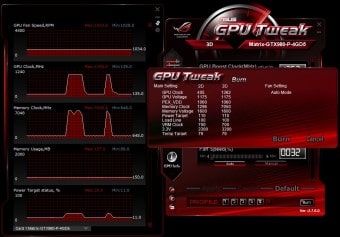 Here you have the “Burn” setting which allows you to actually burn the BIOS to the settings you have saved in the GPU Tweak program, and this allows the card to boot to these new settings which can save a lot of time as in many cases when pushing clocks or benching many restarts can be required and it would be pretty time consuming to have to setup the overclock every time.