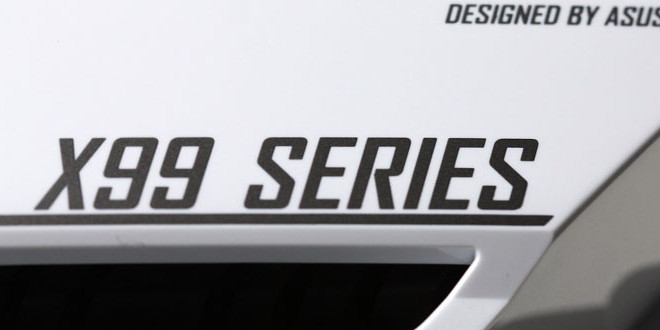 Overview of the ASUS X99 Deluxe 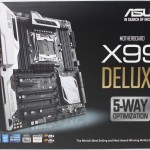 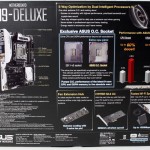 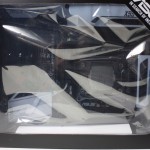 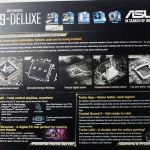 The X99 Deluxe box is surprisingly clean as we know this board has a ton of features yet it is rather subdued with it’s main front panel selling point being the 5 way optimization. There are a few other small feature logos but for the most part the front is dominated by the image of the board which goes without saying is awesome looking.

Flipping up the front flap there is some very pointed feature details which covered some of the 5 way optimization and how it works via the various onboard controllers. I did find it funny that the Turbo app portion uses a LGA1150 style socket/ILM in the image but I am guessing it was just a visual and saved the art guys some work since it was already a prepared image and not really critical to get the messaging across.

The front flip up panel gives a window view to your new X99 Deluxe motherboard.

The rear panel of the box has more spec details including talking about the included fan breakout PCB and also the Hyper M.2 X4 card and the 3T3R antennae config. All things that are really nice features from looking at them so far. 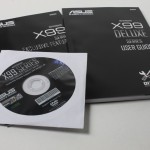 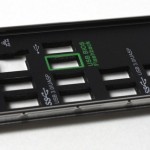 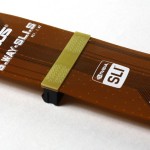 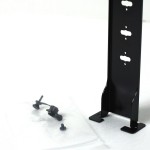 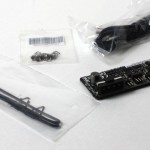 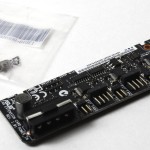 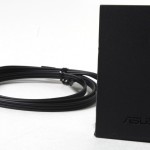 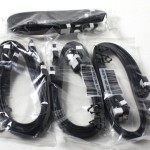 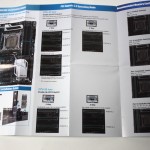 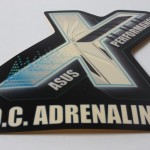 This accessory pack is everything you can imagine to get this board running minus the CPU itself. You are a few SATA cables short should you want to use the SATA Express ports as just standard SATA ports you would need a few more cables. 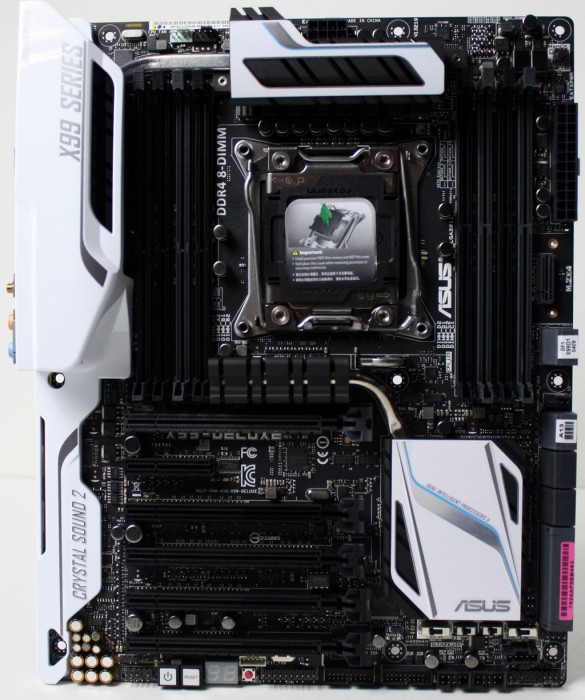 Click Image For a Larger One
Here is the X99 Deluxe and first thing I will say is the scheme for this board is AWESOME! the black/white theme I think looks great and can make for some very awesome looking builds. Be this as it may this is my personal opinion and in reality I normally try not to weigh to heavily on appearance as its an opinion and while I may love it others may not its all about taste. I do feel though that this board simply has a classy feel to it just begging to slip into a sleek sexy build. The slot spacing is good for multi card configs and all of the connectors being at the boards edge mostly makes for a very clean installation, so I really cannot complain here, even the M.2 is vertically mounted to allow more component space on the PCB. This is one area I think there will be some complaints as a clean cable free build maybe with some rigid tubing might make that bracket look out of place sticking 4″ off of the board surface jutting outward.

The connectivity for the X99 Deluxe is complete with a variety of high speed ports and even extreme high speed WiFi AC with up to 1300Mbps speeds supported. 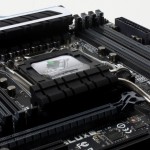 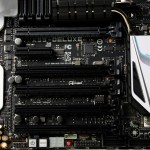 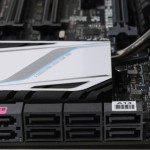 Click Image For a Larger One
Here we have the memory slots which support up to 64GB and more in the future but the JEDEC for DDR4 is 2133 and the slots are spec’d to run up to 3000MHz + depending on DIMM strength and configuration.
The slot Layout can run up to 3 Way SLI/Crossfire or even Quad GPU setup s via dual GPU model cards. Of course depending on GPU config you can also place a HBA in there or the Hyper M.2 X4 card should the onboard M.2 and 12 SATA ports not be enough for you.
The onboard SATA solution thanks to the wealth of bandwidth afforded by the new X99 chipset which can support up to 10x SATA 6G capable ports for a massive storage array or drive solution. There are 8 total ports alone and 4 more via SATA Express connectors, but due to the lack of SATA Express components at this time it is likely that the storage would just be used as 12 standalone SATA 6G ports, two of which are on the SATA Express side from a extra 3rd party controller (ASM106SE) which can be used as standalone SATA ports as well. 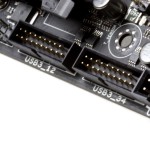 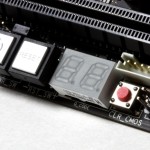 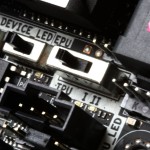 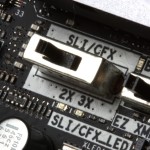 Click Image For a Larger One
The lower edge of the board houses much connectivity including Dual USB3.0 headers which means chassis manufacturers will have to step up their game to keep up with the growing demand for high speed interfaces. On top of this the lower edge also is home to the power/Reset/Clear CMOS buttons and LCD post display which can be used with the board in a bench top setup like we have it configured for testing.
The switches we talked about before and you can see them here, do note that the TPU as I mentioned above have two modes one being a standard overclock where the second step is a more aggressive overclock. What I did find interesting is the CLI/CF switch which basically modifies lane allocation on the baord depending upon your configuration. 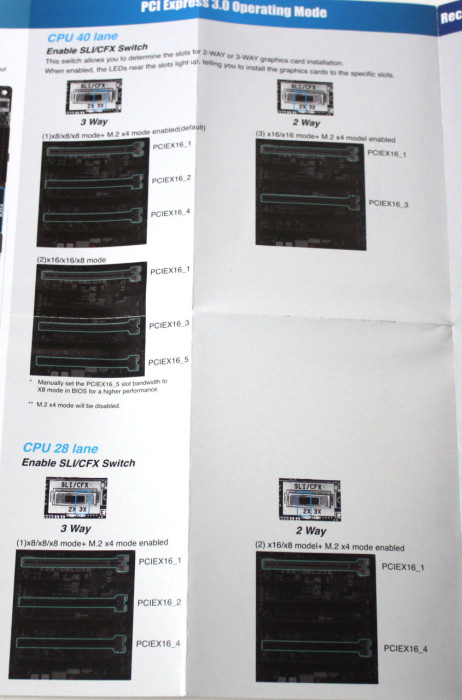 Here you can see the differences in slot allocation which I think was very good thinking on ASUS part to ensure correct slot and lane population. This is especially important with the lower model chip having only 28 lanes you have to pay better attention as to where you are allocating those lanes but for 40 Lane chips I think its more just a matter of where you are allocating lanes to ensure you have plenty of bandwidth to all of your critical components. 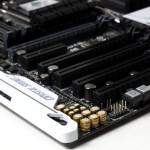 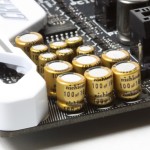 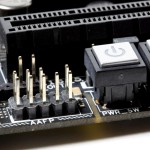 Click Image For a Larger One
The VRM on the X99 Deluxe is a stout 8 design which is more than enough to feed this power hungry beast even when overcloced and  this all digital VRM should easily handle the loading you place on it. Also it is worth noting that the DRAM gets a 2+2 design as well to ensure maximum power delivery capability along with good stability for better overclocking capabilities. The large gold color VRM sink is in place to keep temps in check and although the CPU socket area is admittedly crowded the height of surrounding components and coolers is rather low which should allow for good fitment compatibility with most coolers. 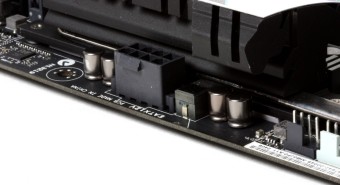 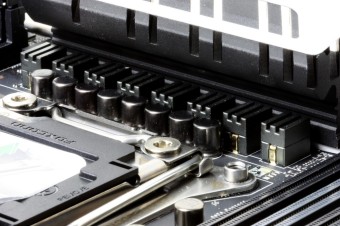 Click Image For a Larger One
The VRM on the X99 Deluxe is a stout 8 Phase design which may seem small due to the crazy high phase count on previous board models but rest assured due to component quality and capability this all digital VRM should easily handle the loading you place on it. also it is worth noting that the DRAM gets a 2+2 design as well to ensure maximum power delivery capability along with good stability for better overclocking capabilities. The large VRM sink is in place to keep temps in check and although the CPU socket area is admittedly crowded the height of surrounding components and coolers is rather low which should allow for good fitment compatibility with most coolers.
The inclusion of components such as the top quality solid state capacitors, Black Wing chokes and various othe rhigh end components ensures you will have a great experience and great performance from the board nw and for a long time to come.

ASUS has completely redesigned the AISuite Software and it now more closely mirrors the new BIOS clean cut design. Anybody ised to the old menu bar design might be a little put off until you go thru the navigation for a few minutes and familiarize yourself.

Overall the AISuite software comes with so many usable tools and one of the coolest I have to say is the DIP5 and 5 way optimization which automatically performance tunes your system for optimum performance and from my testing so far has been almost exactly spot on with my manual overclock results although the auto clock was just slightly higher on CPU volts.

The BIOS of the X99 Deluxe followed in lockstep with what we saw from the Z97 model boards with a very clean cut and smooth interface. The ASUS UEFI for a long time now has been my benchmark for what other companies should do and this latest iteration further refines the look and feel of the UEFI interface.