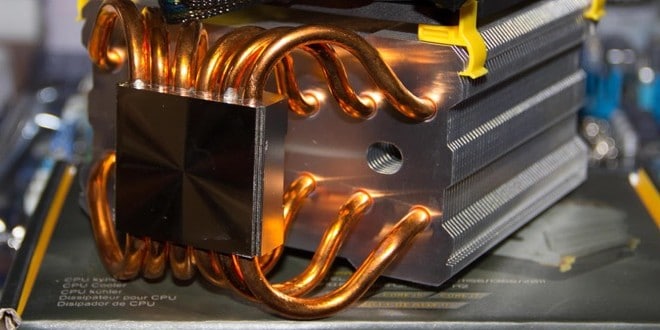 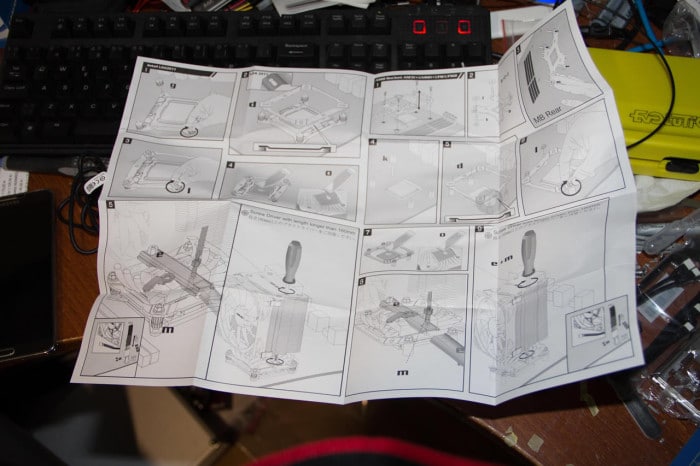 The Justice RC-1204 comes with a very good manual that clearly shows the steps needed to install the cooler. 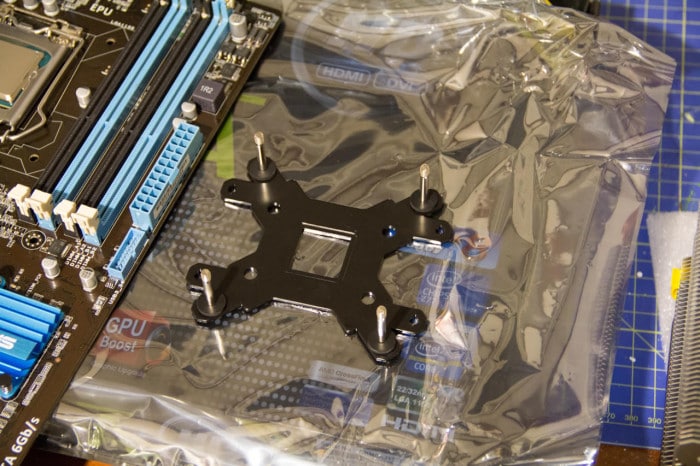 The cooler comes with a universal back plate that can handle all sorts of sockets. To accomplish this it has a lot of arms and holes. This actually can pose a small problem with certain motherboards and cases. The Bitfenix Ronin and the Asus Z77-A-combination put the holes for the backplate on the motherboard a bit to close to the edge of the hole in the motherboard tray meaning we almost could not fit the backplate of the cooler after we had installed the motherboard to the case and had an ever harder time removing it when we wanted to swith cooler. A bit wiggling with the screws fixed that though. 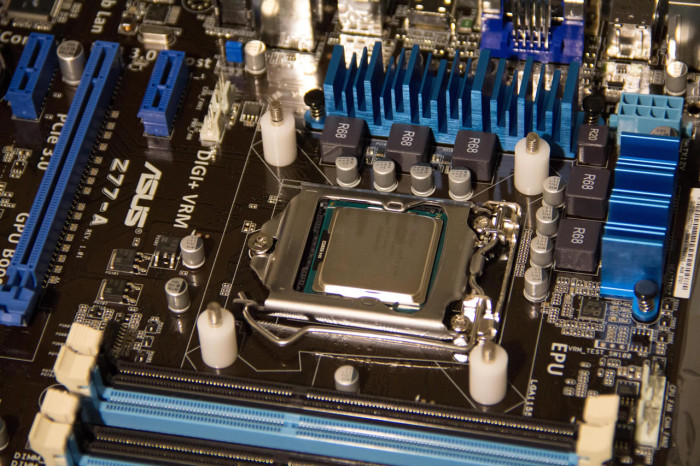 4 white plastic stand-offs help elevate the cooler a bit over the socket. 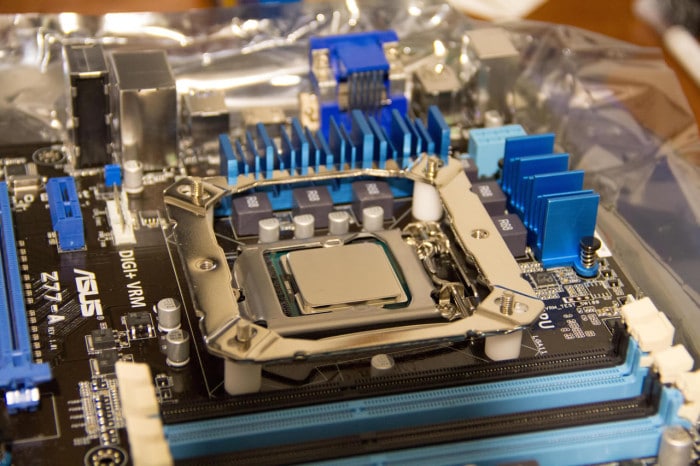 This metal frame again is made to fit for all sorts of CPU-sockets. This makes it quite big and as this image shows it almost interferes with the heat sinks around the socket on this Socket 1155-motherboard. There is just 1-2 mm of space between the frame and the top heat sinks. 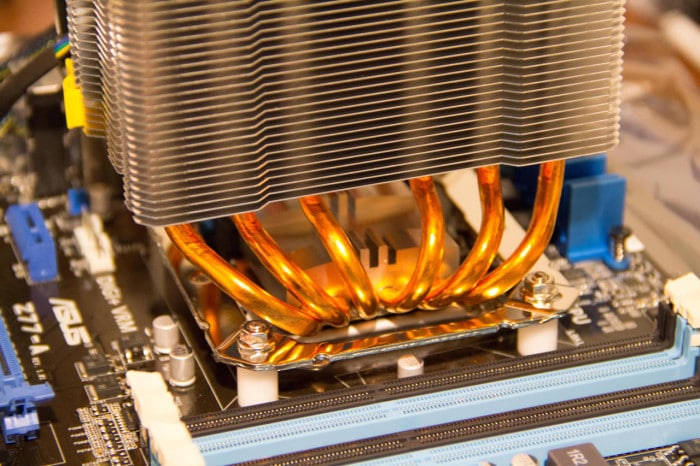 4 screws are used to secure the frame to the backplate. Reeeven includes a small wrench that is used to tighten these screws. 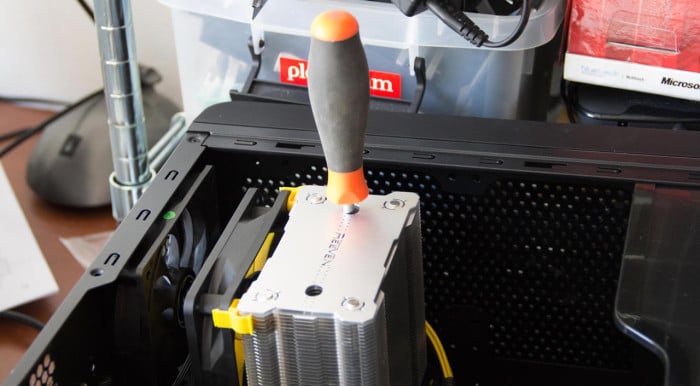 To secure the actual cooler to the frame you need to have a very long screwdriver to screw the screws through 2 holes in the cooler. While for example Noctua includes a special long screwdriver with some of their coolers Reeven does not. This means you need to make sure you have one. The wrench can be used too but it is really not working well. We definitely think Reeven should consider including a long screwdrivers since we realized that the majority of screwdrivers we had at home where to short. Note – in the image above we accidentally turned to cooler the wrong way. As it is installed above both the fan on the cooler and on the case sucks the air which means we get a weird issue where both try to get air from each other. We of course reversed the cooler/fan for the performance tests so the fan is placed on the far side from the case fan (over the memory) which means they both suck the air and pushes it towards the back.

So how does it perform? We installed it in a computer with these components:

We tested by first letting the system sit idle for a few hours and then noting the temperatures of the CPU via Asus monitoring software as well as the maximal measured CPU core temperature using the software CoreTemp. To test the system while under full load we ran the software OCCT 4 and selected the built-in CPU-test which puts a 99% load on to the CPU and its cores. The program was left running for an hour so that the temperatures stabilized and again the mean temperature of the CPU was noted from the Asus monitoring software as well as the maximal recorded temperature for the individual cores. Last but not least we also measured the sound level from 1 meter behind the case as well as noted the speed of the CPU-fan.

The Reeven Justice RC-1204 has no problems keeping up with the Noctua NH-U12S. That is not bad since Noctua makes excellent coolers. While this is not a Core i7 remember that we overclocked the CPU from 3.2 GHz to 4.22 GHz. Even if we look at the highest recorded core temperature of the CPU is far away from any “dangerous” temperatures. The Reeven Justice manages to beat the Noctua-cooler but it is so close that we basically can say it a tie. The Reeven Hans RC 1205 has a few less heat pipes which could explain the slightly worse performance.

The Coldwing fans are really quiet. Remember that this is the noise level we get from the whole system which includes two 120 mm fans in the case. The fact is though that the whole system is very quiet. In fact, several times when walking into the room where this computer stood we had to double-check it was actually running as it was so silent. Note that the fan did not spin up to its max at 1500 rpm since it simply did not need to.

You never know what to get when a new company starts selling computer components. If you are lucky it is people who already have worked with similar products who decide to branch out. We do not know what the case is with Reeven as their site is pretty anemic with that info but it is obvious that they know their stuff when it comes to cooling.

The Reeven Justice RC-1204 is a great CPU-cooler that without any problems can keep up with products from more experienced companies like Noctua. We like the silent fan as it makes sure that the system does not turn into a leaf blower or hairdryer. The fact that mountings for a second fan is included is good.  The universal back plate ensures that when we switch motherboard and socket we just need to move the whole cooler to the new motherboard instead of having to look for the package and accessories to find the back plate or mount for the new socket (yes, we keep misplacing our stuff).

So what do we not like then? Well, it would definitely have been nice if Reeven include a long screwdriver just as Notctua does as it is almost impossible to mount the cooler without it. The cooler is also very tall so if you are using a midi-tower make sure it can handle the cooler (our Bitfenix Ronin had 1-2 mm space between the cooler and the window). Other than that we can not really complain. It simply is a great cooler.

One thing we unfortunately cannot comment is price. The Reeven Justice RC-1204 does not seem to be available right now anywhere. We looked on the web, looked at various stores both in Europe and the US but it is not there yet. So we cannot comment on value just yet. We would however be surprised if it was more expensive than the Noctua NH-U12S as Reeven themselves hoped to have that included as comparison in this review. That cooler cost around $60 so this is the price we should expect Reeven to try to target.

The Reeven Justice RC-1204 is great cooler that not only runs silent but also can keep your CPU cool.

The Reeven Justice RC-1204 is great cooler that not only runs silent but also can keep your CPU cool.