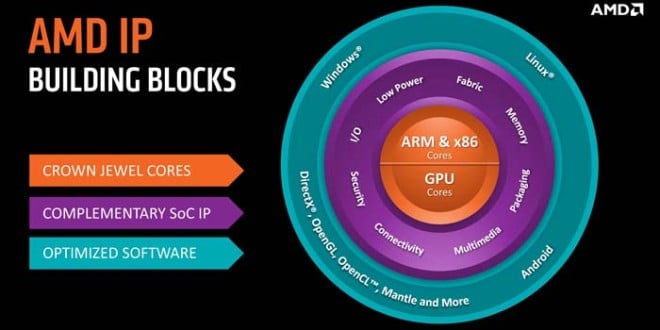 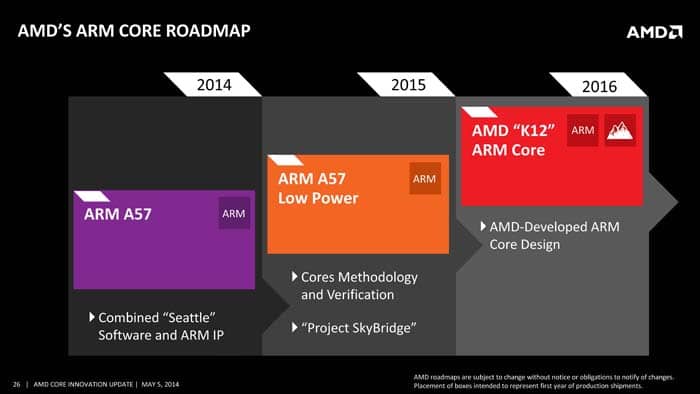 AMD hosted a “Core Innovation Update” conference today where we get a hint of what is coming for the company in the next couple of years. AMD’s future roadmap will still be focusing what it has done well in the past with x86, ie desktop, laptop, and servers. However, the company also will put a greater emphasize on the ARM architecture as it attacks in growth market through its “ambidextrous strategy”. 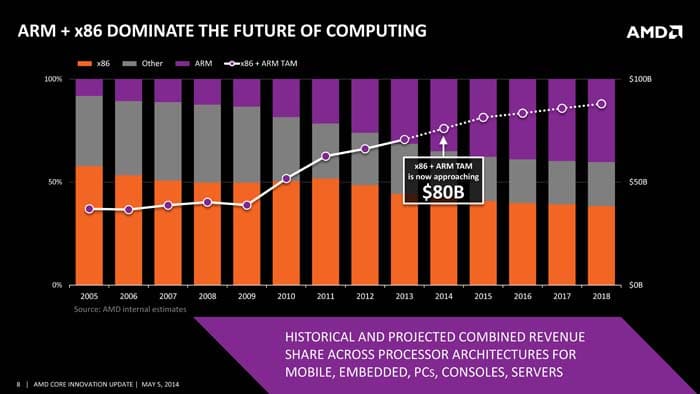 The desktop market is shrinking which means the revenue from the X86 is also not as good as it used to be. According to AMD’s internal estimates, the revenue share for the x86 will continue to decline (although at slower rate) in the next few years. At the same time, the revenue from ARM is growing and is expecting to grow. While Intel has renew a push for the x86 on the desktop, AMD’s road map for the future would be exploring the growing market such as professional graphics, dense server, embedded, semi-custom, and ultra-low power client.

AMD’s future plan consists of continuing to leverage on its GPU power but at the same time, pushing both x86 and ARM forward and eventually merging the multiple ecosystems together through the technologies such as HSA, hQ, hUMA, etc. 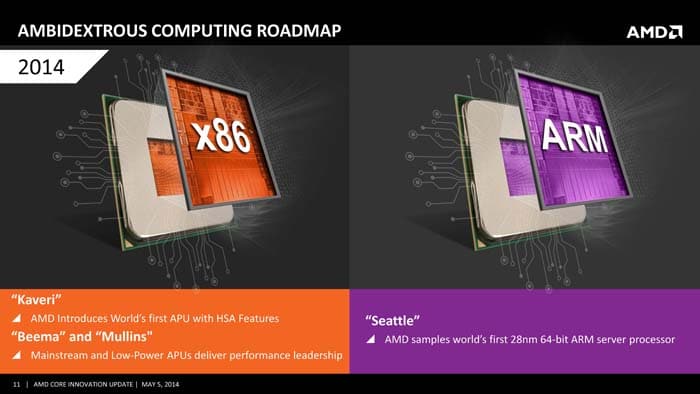 Current road map from the company for the rest of the year would continue with the already launched Kaveri, Beema, and Mullin x86 APUs for desktop and low power systems. On the second half of 2014, AMD will officially release Opteron A1100, codenamed “Seattle”, a 28-nm 64-bit ARM processor intended for server market. 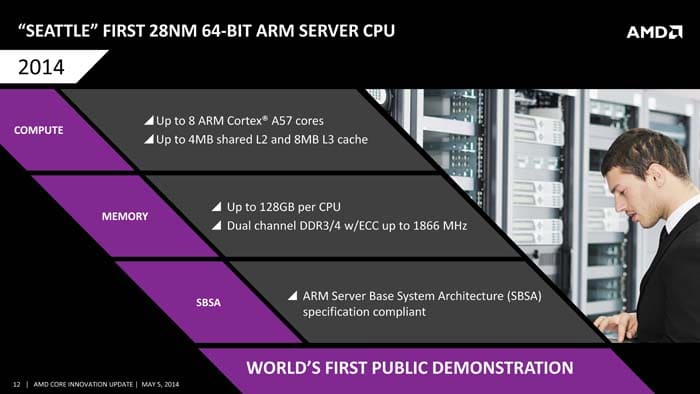 The Seattle will feature up to 8 ARMv8 Cortex A-57 cores, 4MB shared L2 and 8MB L3 cache, up to 128GB per CPU DDR3-1866 MHz ECC memory. It will be ARM Server Base System Architecture (SBSA) specification compliant. During the conference, AMD demos that it already has a fully working system running Linux and the LAMP web service stack that hosting WordPress and streaming video clips. 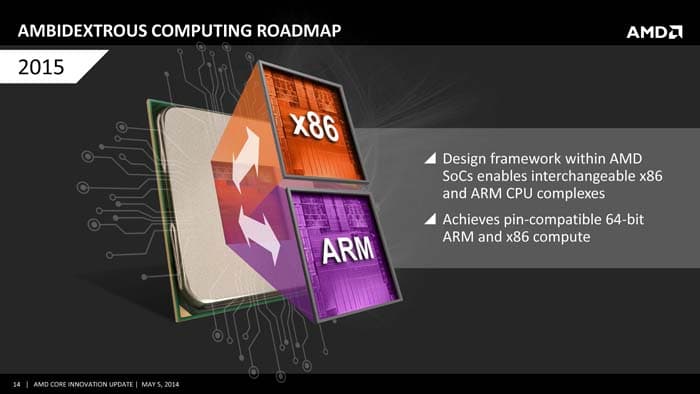 Moving forward, in 2015, AMD will unveil “Project SkyBridge”. The Project SkyBridge is a family of 20nm APUs and SoCs that features AMD GCN graphic. On the ARM side, SkyBridge will use low power ARM Cortex A57 cores that AMD licensed. It will be the first SoC from AMD to officially supporting Android platform. The x86 side be based on the Puma+ core. Although has not yet disclose the information on the Puma+, we presume it will be fine-tuned of the current Puma cores with 20nm process. 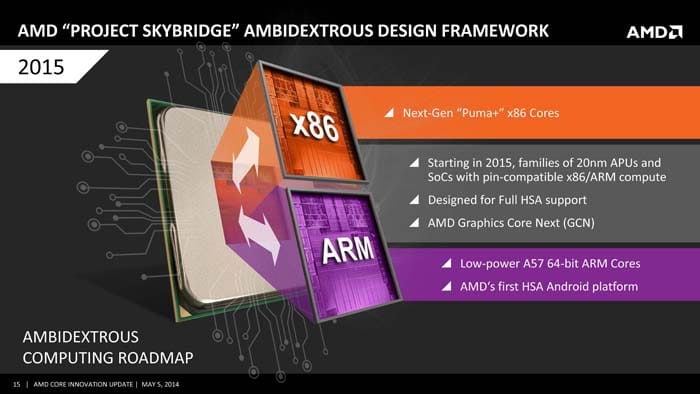 The most intriguing feature about the SkyBridge is that it will be pin compatible, meaning that you would be able to use the same motherboard and all of its components with either ARM or x86 by simply swapping the processor out. Although, AMD has not disclose if these products will be coming to the desktop as it appears it is aimed toward embedded and ultra-low power client market. 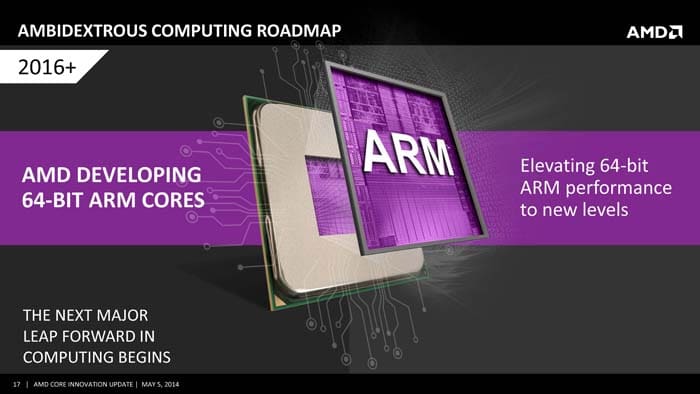 Even more exciting products is coming on 2016 and forward as AMD will unveil its own custom design 64-bit ARM cores and a new x86 micro architecture core. Jim Keller is the leading the team that is designing both the x86 and the ARM cores with codename K12. Not much information has been released as these products are still couple of years away. The new APUs is once again going to be targeting toward where AMD think it has the most potential to grow its business, ie dense server, embedded, semi-custom, and ultra-low power client. 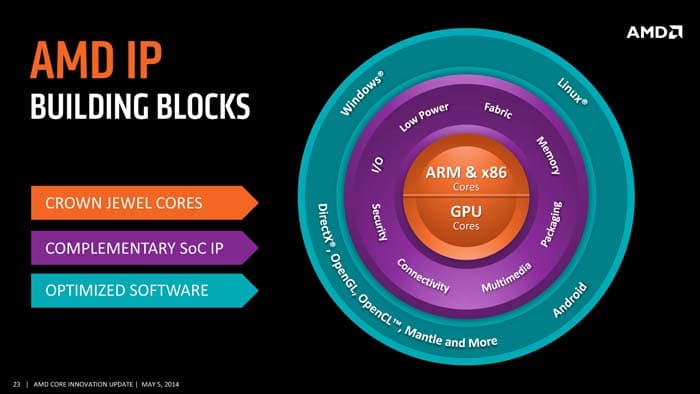 AMD’s new “ambidextrous” strategy means that it will target the market with both ARM and x86 going forward. It wants to leverage the strength of either processors depending on the workload. With the ability to seemingly integrate both ARM and x86 into a single platform allows AMD to offer its customer the freedom of choice where they can design a system utilizing ARM initially but then swap it out with x86 for higher performance. It is even possible in the future we will see a processor with both ARM and x86 on the same packaging as AMD’s vision is to offer a heterogeneous computing where the software will be ISA independent where it will figure out which one of the two processors will be best suited for the given workload.

These are some exciting news coming from AMD where it is moving toward what it is trying to achieve when it founded the HSA. We will have to wait and see if the upcoming processor are able to compete against others on the market in terms of performance and power consumption, From what we can see, AMD has a clear vision of the future of the company and what is trying to achieve. It has a lot of talented people in the company and if it can deliver the promise, it has a very bright future ahead as it is currently the only company that can deliver such versatile platform.