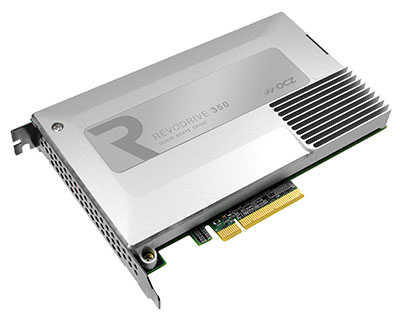 OCZ has launched the latest SSD, the RevoDrive 350 Series, utilizing the PCI Express interface. Current SATA SSDs are saturating the SATA interface’s 6 Gbps bandwidth so the faster PCIE interface is needed in order to achieve higher performance. According to OCZ, the RevoDrive 350 can deliver three times the performance of SATA SSD. Utilizing PCI Express Gen 2 x8 interface, the card takes up to four LSI SF-2282 processor and uses 19nm in-house Toshiba NAND (kind of expected as OCZ is part of Toshiba now). It has a rated sequential read up to 1.8GB/s and up to 140,000 4K random write IOPS.

The new RevoDrive 350 also comes with OCZ’s proprietary “Virtualized Controller Architecture (VCA) 2.0 to deliver highly efficient performance aggregation while reducing the burden on host resources.” The VCA 2.0 essentially makes the RevoDrive 350’s multi-controller design to appear and at as a single drive to the host system so that drive-level management software such as secure erase, SMART, and TRIM willb e supported  (something that a lot of RAID SSD cannot do).

The RevoDrive comes a rather good looking integrated heatsink for added thermal dissipation. It will support both Linux in addition to Windows. It is backed by 3-year warranty. For storage capacity, users can choose among 240GB, 480GB, and 960GB but the PR has no pricing information available.

VCA 2.0 effectively makes the RevoDrive 350’s multi-controller design appear and act as a single drive to the host system to enable drive-level management features such as secure erase, SMART, and TRIM. In addition to mass data storage, the RevoDrive 350 can also be used as bootable device, promoting ultra-fast system boot-ups.

Improving on the previous generation, RevoDrive 350 features a sleek integrated heatsink that provides a more stable and cooler thermal SSD environment, and includes optimized drivers redesigned from the ground up with new Linux support in addition to Windows® OS.  Available in 240GB, 480GB, and 960GB capacities, RevoDrive 350 provides ample space, and comes backed by a 3-year warranty.

Today, check out the the reviews for the NVIDIA GeForce RTX 3070 Ti from our …