Do you think the regular NVIDIA GeForce GTX Titan is too slow? Need a bit more speed in that delicious expensive single-GPU package? Then Zotac has just the products for you. The ZOTAC GeForce GTX TITAN AMP! Edition is, according to Zotac at least, the fastest single GPU card and the fastest GTX Titan available right now. While we can’t vouch for that we can tell you that it is a GeForce GTX Titan that has been overclocked almost 10% right out of the box. What does that mean for performance? Well, read on to find out!

Before we get into the benchmarking let us take a moment to enjoy what the NVIDIA GeForce GTX Titan has under its hood.

Yes, this is a beast. Remember that this is a single-GPU-card, not a dual-GPU card like the GTX690. We cannot wait to put one of these in a system that streams games to a NVIDIA Shields game console.

Compared to a stock GTX Titan we see an increase in the stock clock from 837 MHz to 902 MHz (~8%) and an increase in boost clock speed from 876 MHz to 954 MHz (a cool ~9% increase). Other than that this is “just another” GTX Titan without any special thrills or features.

We won’t bore you with the full run down on the features of the GTX Titan. You can read all about them in our article here. We all are pretty familiar what the NVIDIA GPU’s can deliver when it comes to physics, 3D-vision and other cool features. The main feature of the GTX Titan still is the raw speed that you get in this single-GPU package (and the price).

If you expected something special with this card when it comes to cooling or the outer shell of the card you might as well stop reading now as this looks as reference looking as it can. In fact, when benchmarking it and comparing it to a ASUS GTX Titan we actually almost put back the wrong card in the wrong box as they look exactly the same. 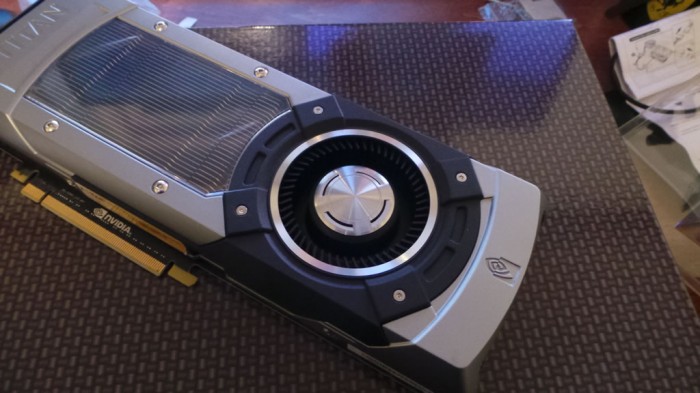 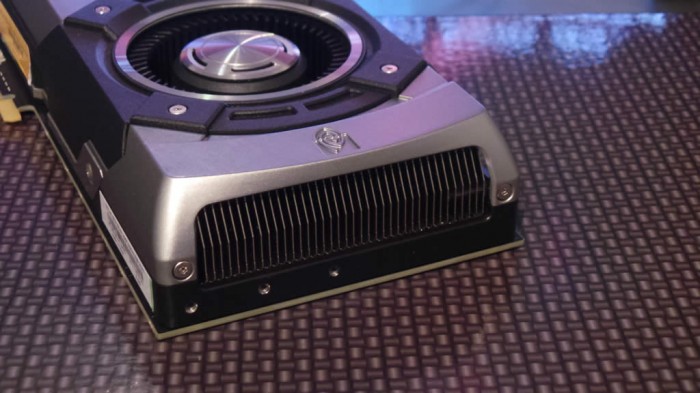 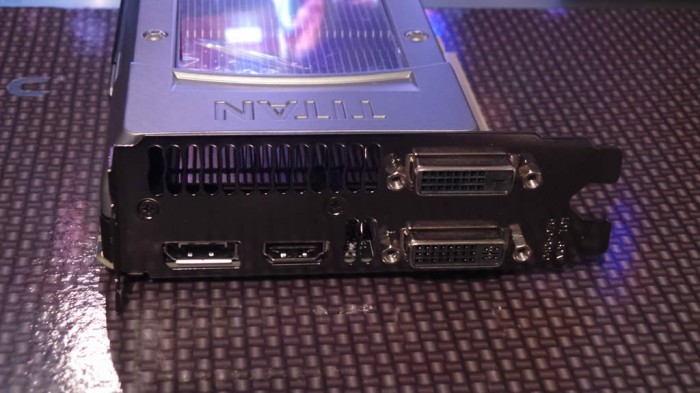 There are no markings on the card indicating this is a Zotac card, no stickers and no special cooling. For better or worse, this has the same look as a reference GTX Titan. 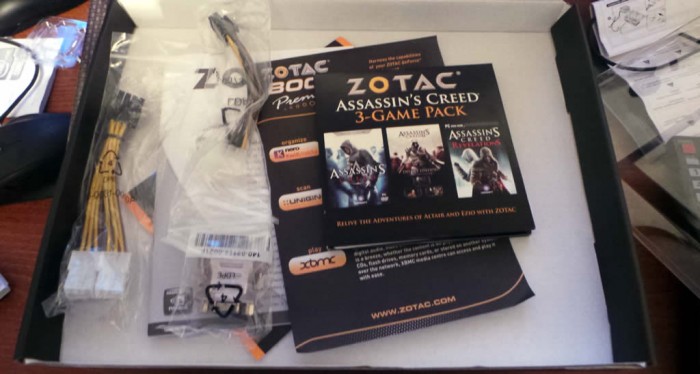 Zotac includes the Assasin’s Creed 3-Game pack which gives us 3 cool games as well as XBMC (Xbox Media Center – using a GTX Titan in a media PC though is overkill), Nero KwikMedia and Unigine Heaven Benchmark. It is a decent bundle. 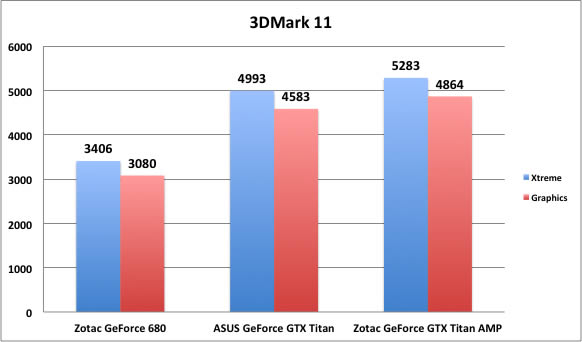 We start off with the old and trusted 3DMark 11. We of course use the Extreme-setting. The Zotac-card right away gets about 6% better performance than the regular Asus Titan. 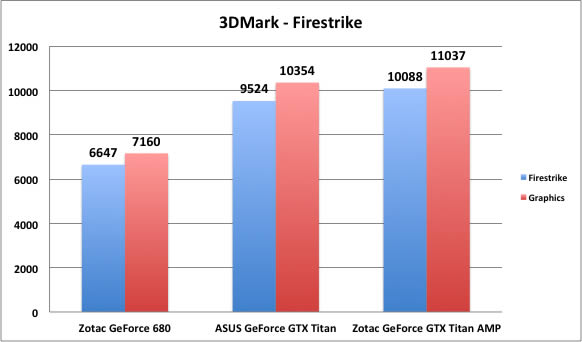 The latest 3DMark has the Firestrike-benchmark which is meant to be used for high-end cards like the Titan. This time we see about 9% better performance for the AMP-edition card. 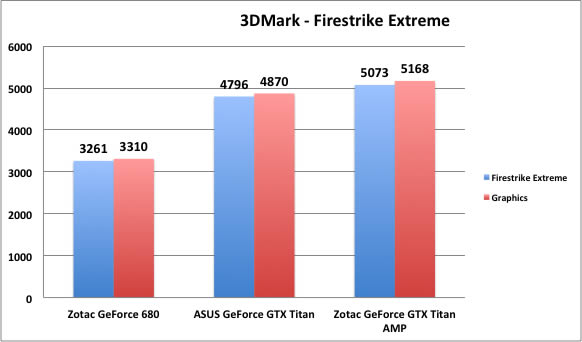 The Extreme-setting of the Firestrike-benchmark pushes the whole system and now the difference is less than 2% indicating that there might be a bottleneck somewhere else. 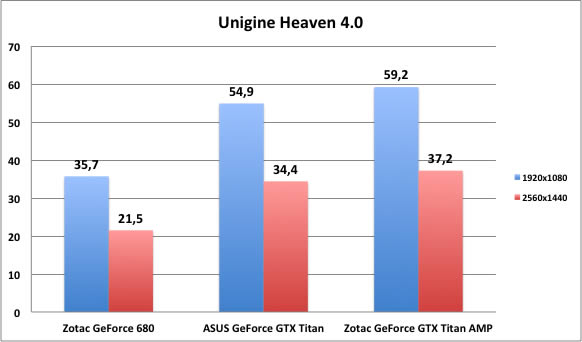 Again we see a ~9% difference between the regular and the AMP’ed GTX Titan. 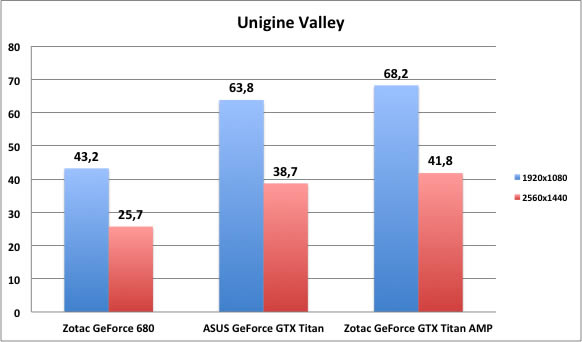 And the pattern continues with the new Valley-benchmark. 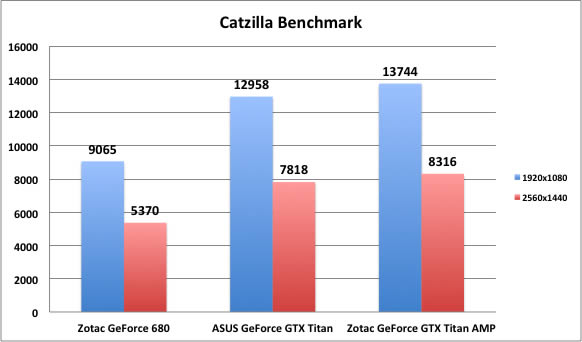 Yup, the AMP Edition-card is faster. 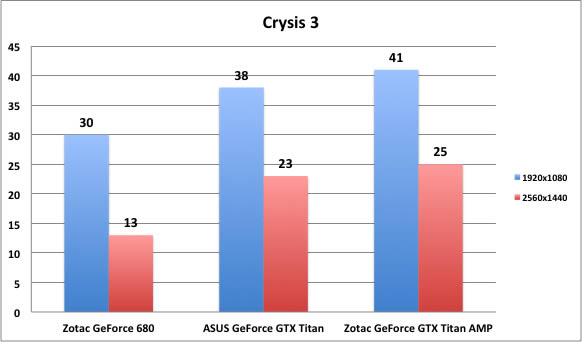 Crysis lives up to its reputation of needing a killer-system to run well at the highest settings. When we crank it up to 2560×1440 with 8xAA, 16xAF and the other settings set to Very High then even the GTX Titan cannot perform well enough to offer average 30+ fps. 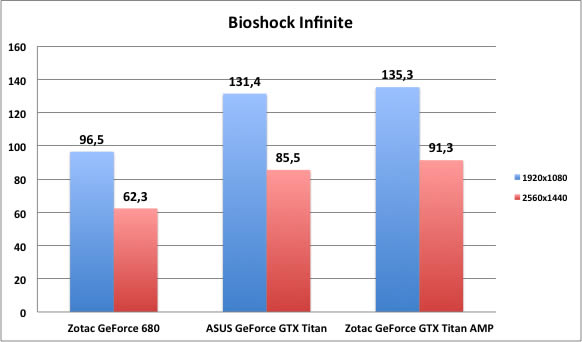 Even though it is a new game it runs well on the NVIDIa cards. The Zotac GTX Titan AMP Edition manages almost 6 frames per second more in average at 2560×1440.

We of course tried some overclocking using the MSI Afterburner program. We managed to add 75 Mhz to the core clock before 3DMark Firestrike stopped working. We did not play with voltage so there might be some more headroom for those who have more time. This meant we arrived around 1029 MHz when turbo boost kicked in. 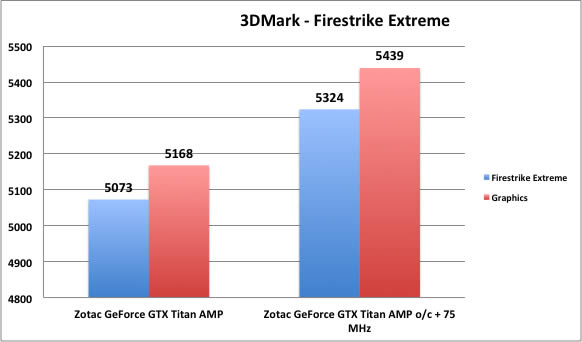 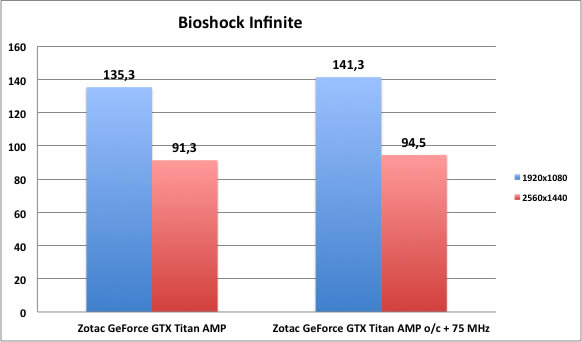 In both our benchmarks we see a marked improvement in performance when overclocking.

While we have not tried every GeForce GTX Titan available it is clear that the Zotac GTX Titan AMP! Edition is one of the fastest cards available right now. It offers a definite increase in performance over a regular Titan.

Should you get a Titan instead of a GTX 690, two GTX 680 in SLI or even an AMD 7990? In the end the price will be pretty similar and we like the idea of having one GPU do the job better than any multi-GPU solution that may or may not work

Speaking of pricing we know that the card is about $100 more expensive than the regular Zotac GTX Titan here in Sweden and we expect that this will be pretty similar in other markets too.