ROCCAT’s latest mouse, the Kone XTD follows in the footsteps of it’s previous iteration in the professional mouse lineup. Read on to see what’s new.

Roccat, who specializes in high performance peripherals,  brought forth a new Kone. One of the dominant features is a way to enhance precision by self-calibrating on any surface. The Roccat Kone XTD retails at $90 and is available at online retailers now. Since this product is so closely related to the Roccat Kone+, there will be some comparisons and contrasts between the two mice. 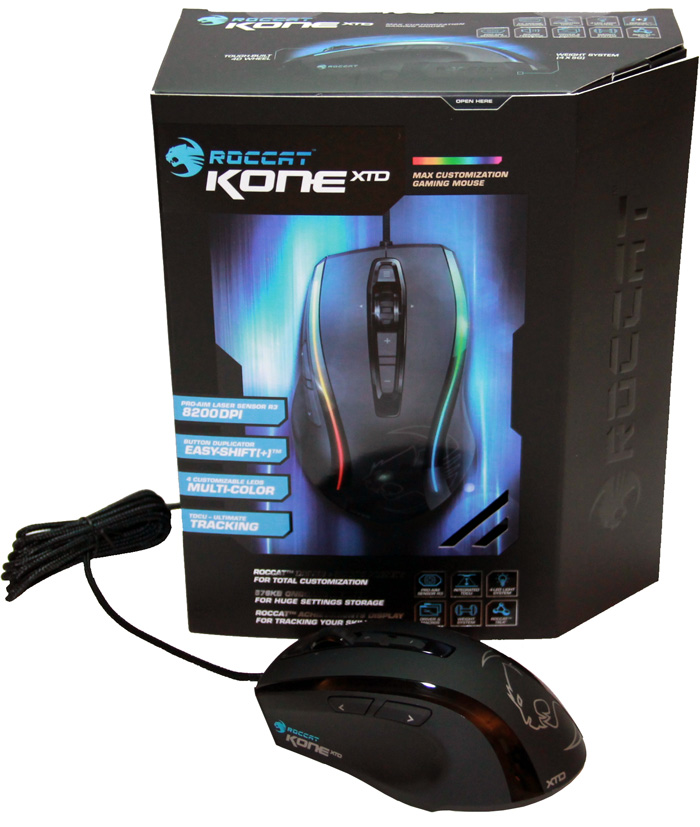 The Roccat Kone XTD packaging puts on quite a presentation with it’s magnetic-locking front panel and surprising heft. The inside panel describes in finer details the EasyShift button macro system and all of the default keys (which of course can be reconfigured to your liking). 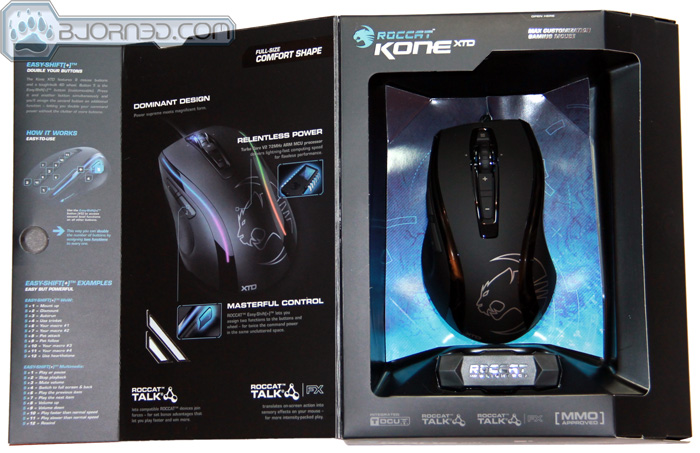 The front panels of the box touch on some of the main features, while the specifications are listed in multi-languages on the back panel.

The form-factor of the Kone XTD is larger, accommodating middle to large hands. One thing to notice right away is the mouse wheel is the type with horizontal scrolling (referred to as tilt). The primary mouse buttons are seamless and can be activated all the way up to the base of the minus button. The case is coated with a synthetic material that is smooth like plastic yet completely non-slip like rubber. The cord is 1.8 meters long and is braided in such a nature as not to bind. The mouse wheel mechanism on the XTD seems slightly superior to the Kone +’s in the fact that is much tighter and responsive in not only scrolling but the side to side tilt activations.

Roccat has done some impressive work with lighting effects on the Kone XTD. These macro shots represent only five of the full color spectrum the Kone XTD cycles through on one of it’s many customizable presets.

Roccat has a streamlined driver interface, considering how many options are available. When core changes are made here they will be automatically carried over to the windows control panel. Sensitivities for both wheel axis is found here as well as five user preset dpi toggle settings. All buttons on the mouse are easily reassigned with drop-down boxes on the standard configuration and EasyShift panels. At default settings the thumb “back” key momentarily activates all of the EasyShift buttons displayed below in the right panel (keep in mind that the thumb buttons are the only hotkeys EasyShift may be assigned too).  The white Macro Manager button brings up a basic screen for recording and editing input for macros. 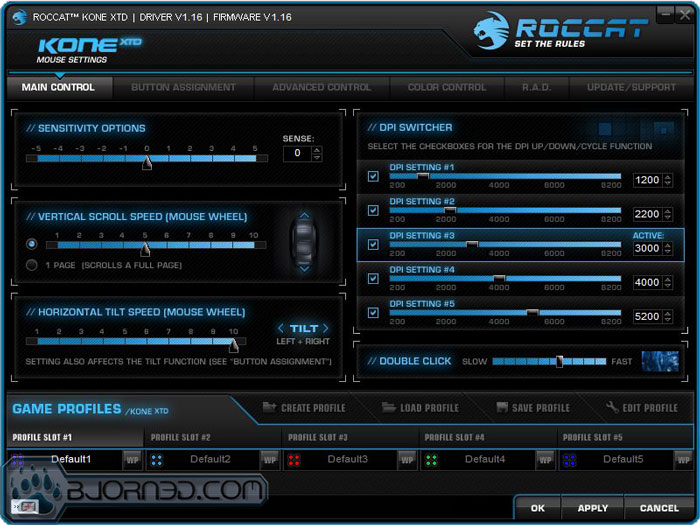 One of the best features is a way to self-calibrate the mouse for the users’ preferred surface and lift-off distance control; in addition, (and rarely seen in mouse drivers) is sound feedback, where a disembodied voice boldly proclaims any dpi changes (in numerical values), profile switching, sensitivities, or volume changes. The default volume is rather booming, so it’s recommended to turn the slider volume down. Yes, it is the same British Robotic Booming Commander voice found on all of Roccat’s previous voice-enabled peripherals. On the right panel, four points of color customization can be changed with five different effects.  One may even change the direction of the spectrum cycling. A very subtle yet impressive effect. 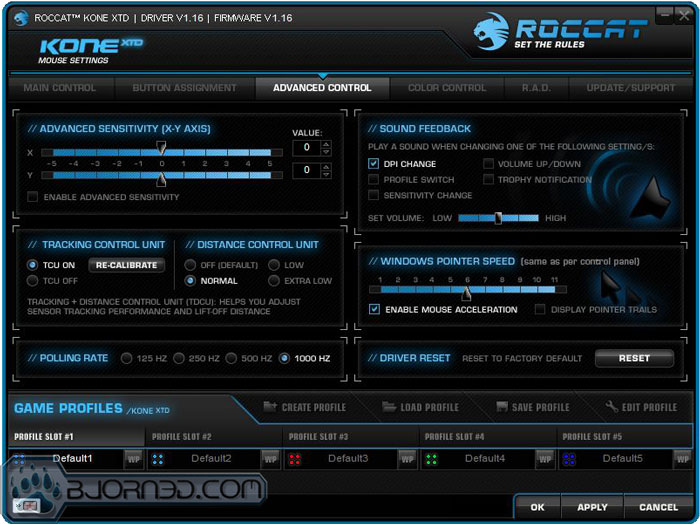 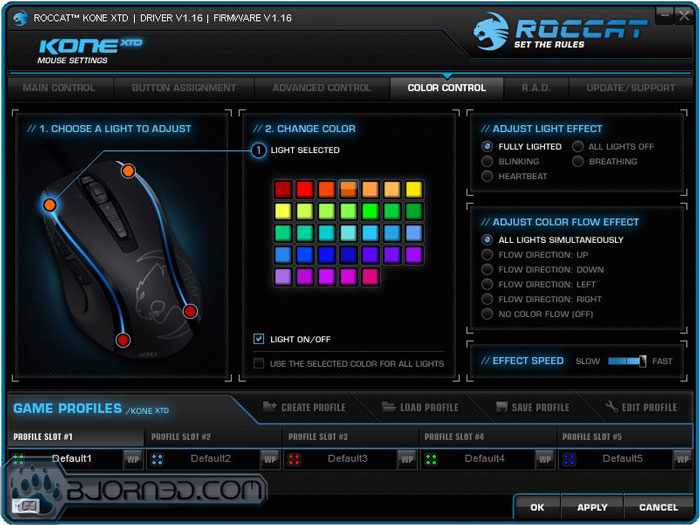 This is where the drivers between the Kone XTD and the Kone+’s drivers vary. Roccat dropped the pre-defined game specific macros section for a trophy section. Basically it records all of your clicks on all the buttons (including mouse wheel) and awards you trophies, with of course the Booming Voice proclaiming you received one. The last panel gives online links to the site and a way to check the Kone’s firmware and drivers to validate they are up to date. 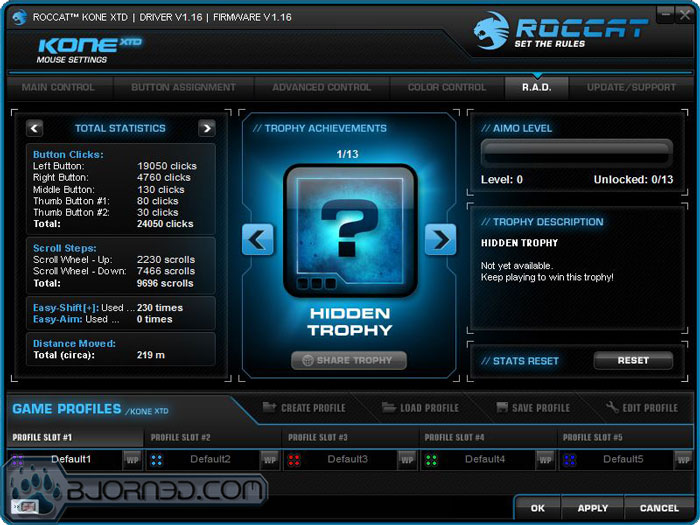 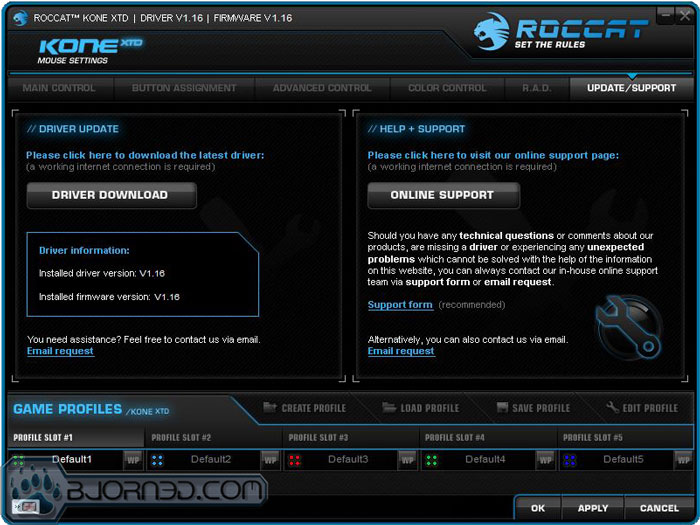 A higher end system is being used for testing to ensure the 1000MHz polling can be utilized; some older motherboards sometimes have issues with this due to USB port configuration (this can introduce artificial lag into an application or game, making the mouse feel unresponsive). Listed below is the relevant testing gear specifications:

Applications and games were rigorously tested over a two week period to get an overall feel for the Kone’s performance. The software chosen was intended to give a maximum range of movement in the following categories: precision graphics work; hyper-reflexive aiming; tracking; and skilled firing on all buttons (to test physical button flex and accessibility). Here is the list of applications used:

Since the Roccat Kone XTD is a self-calibrating mouse, the favored mouse mat was the Razer Ironclad as a testing surface (white in color).  The distance control unit was set to “normal” prior to calibration.

Let’s begin by examining the ergonomic characteristics of the Kone XTD: Borrowing winning attributes from other highly recognized mice, it has the physical grip of the the Mionix Naos 8200 (minus full pinky support) and combines the seamless primary mouse buttons of the Razer Lachesis. Due to the larger form-factor the weight is decent and solid feeling (with all the weights in for a total of 20 extra grams). The mouse wheel has a notched rubber surface for added grip and a plastic radial hub for horizontal axis support. As mentioned before, the mouse wheel itself seems to have a slight improvement over it’s predecessor, the Kone+, with defined and smoother scrolling.

On-the-fly DPI settings are possible via the EasyShift key in 100 dpi increments (initiating the optional voice feedback). The voice feedback is a unique added touch, but the voice quality is slightly rough sounding (like a commando barking out orders for volume up/down, to a synthesized voice addressing the dpi settings). Keep in mind, the actual usefulness of this feature far outweighs any niggles with voice quality and the volume can be adjusted independently. Perhaps Roccat will let modders inject their own voices into the drivers to provide more of a soothing voice. Concerning the lift-off distance, set to normal it was still quite high (approximately 4mm). When set to extra-low and recalibrated, the lift-off distance decreased to 1mm — about as good as it’s going to get.

The default EasyShift profile is a real treat to use with any multimedia player, whether iTunes or the Windows standard. EasyShift plus wheel up or down controls volume while the tilt is track control. For standard windows applications the horizontal scrolling worked in all the browsers. In Photoshop CS5 the horizontal scrolling didn’t function at all, in spite of creating a predefined profile. Otherwise there was zero jitter at the medium-high range dpi’s (3000-4400). For doing finer, detailed work in Photoshop CS5, a separate profile was set to lower the dpi in 1000 increments.

All games where tested with a dpi setting of 3200-4200 with a native resolution of 1920 x 1200. The sensor of course goes much higher; however, playing at this resolution the objective is to find any anomalies such as mouse stutter or jitter. The three games performed with equal robustness, with a special nod to Crysis 3, that can stress any system. Changing the dpi on the fly in the game was instantly gratifying and being able to operate the media player in the background was an added plus. StarCraft and Torchlight were tested as a mouse button torture-test and never once did it not register or skip a click.

This is one of the few mouse products that has completely dominated our scoring categories, besides the previous iteration of the Kone+. Performance was amazing due to the fact that there was zero discrepancies in sensitivity between applications and DirectX games. This type of performance is partially attributed to the superior self-calibrating tracking distance and control unit. Listing at approximately $90, it is a slightly higher priced peripheral, but one is getting a lot of bleeding-edge features not found elsewhere, especially the dazzling cyclic color spectrum show (which really makes this product unique). So what is the main differences between the XTD and the Kone+? Three things: an improved laser sensor capable of maxing out at a whopping 8200 dpi, a quality braided cord, and slight driver differences. The build quality is still top-notch, with a heavier feel and all parts of the hand and fingers are supported; excellent for an ergonomic fit.