Hot on the heels of the GTX Titan comes the new GTX780 that uses the same type of GPU as we see in the GTX Titan. Zotac of course is one of the companies coming out with their own GTX780 card and we have taken it for a spin to see how it fares compared to the GTX 680 as well as the Zotac GTX Titan AMP! Edition  that we tested earlier this month.

The GTX 780 uses the same architecture that we see in the GTX Titan including the Kepler GK110 GPU. While the Titan still has a bit better specifications the GTX 780 is a big step up from the GTX 680.

We have posted an article about the features of the GTX 780 which you can read here. Anyone who has been interested in the GTX Titan knows what you can expect. 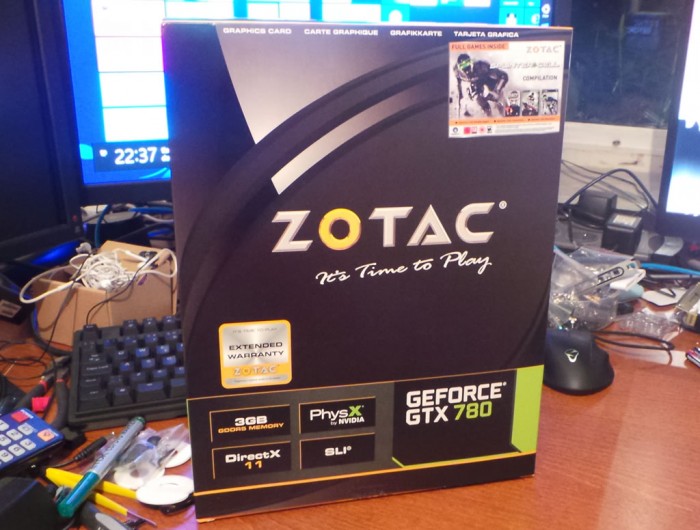 The Zotac GTX780 comes in the same style of box as all their other cards. It is well packaged and should not be damaged in transit. As the box shows Zotac includes three games with the card. Some previous cards including the Zotac GTX Titan AMP! We reviewed a while ago comes with 3 Assassins Creed games but this time Zotac has chosen 3 Splinter Cell games instead. 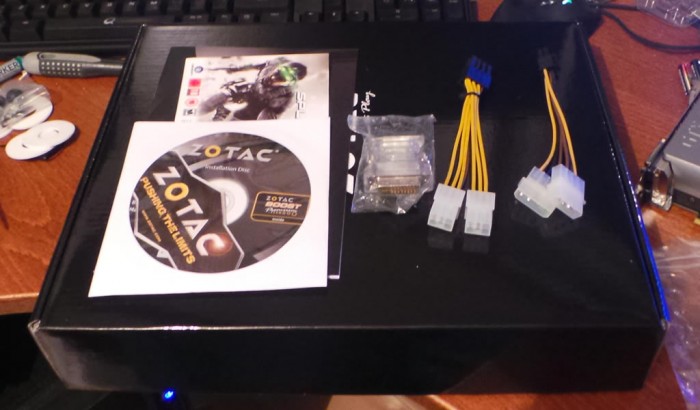 In addition to the games we get a CD with drivers and Zotacs own Firestorm overclocking utility. We also get power-adapters and a DVI to VGA-adapter. 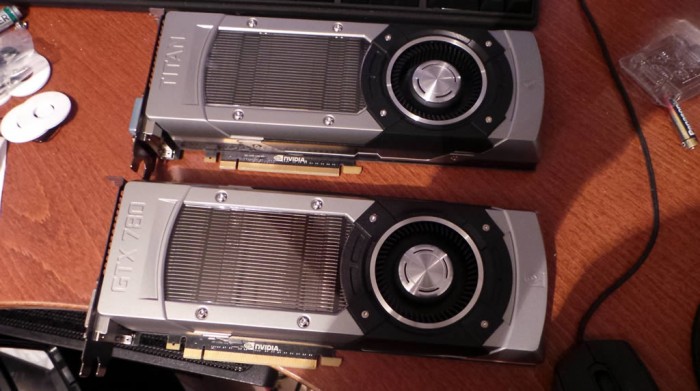 The Zotac GTX780 uses the reference design and looks exactly like the GTX Titan. In fact, as you can see from the image it is easy to mistake them from each other if you do not look closely. 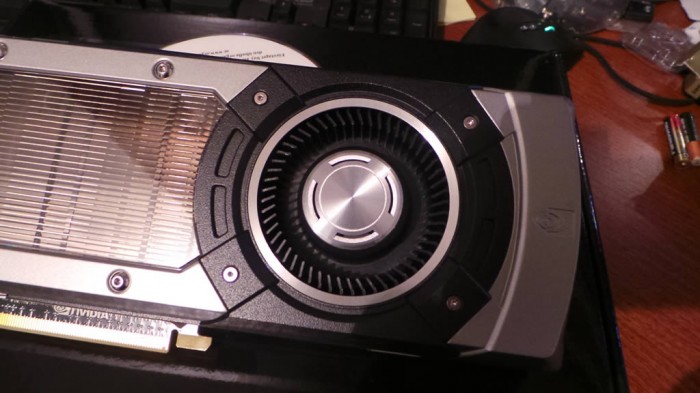 The fan in the GTX 780 is the same as on the GTX Titan and it works very well in keeping the card cool while not making a lot of noise. 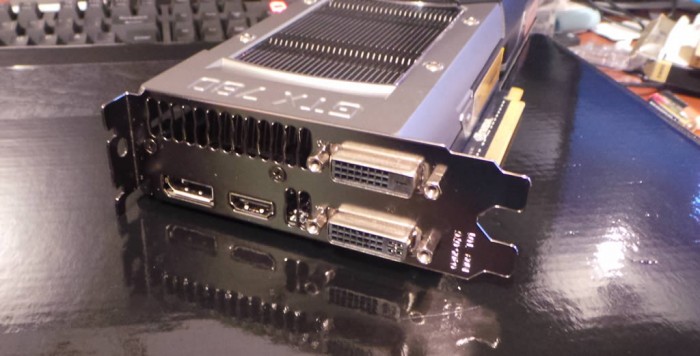 We get two DIV, one HDMI and one full sized DisplayPort-connector on the card.

We will use the following applications to benchmark the performance of the Zotac GeForce GTX 780 video card. 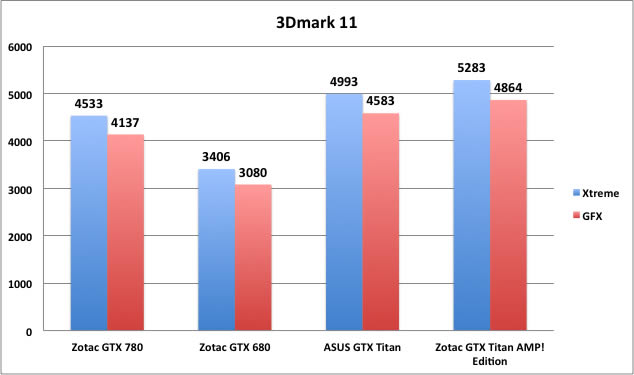 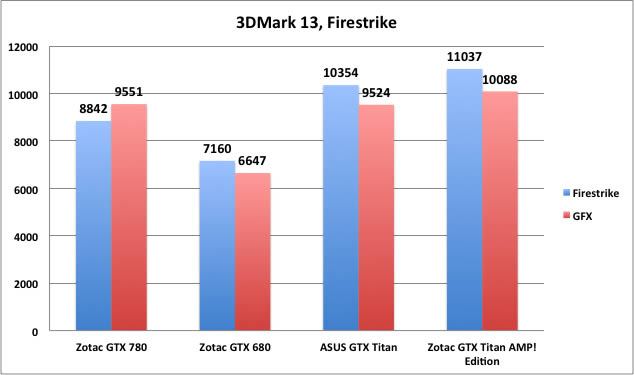 In the regular test we again see the GTX780 beat the GTX680 with over 30% better scores. It trails the GTX Titan with about 7% lower scores. 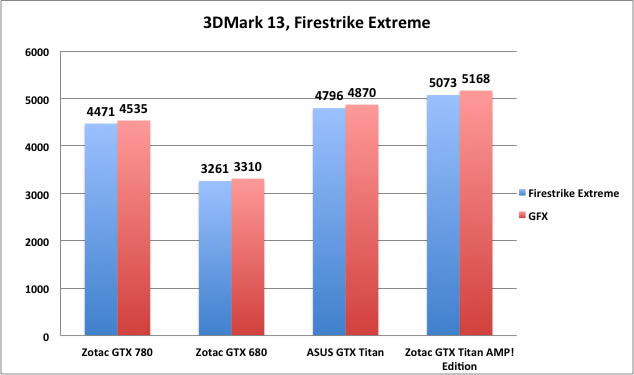 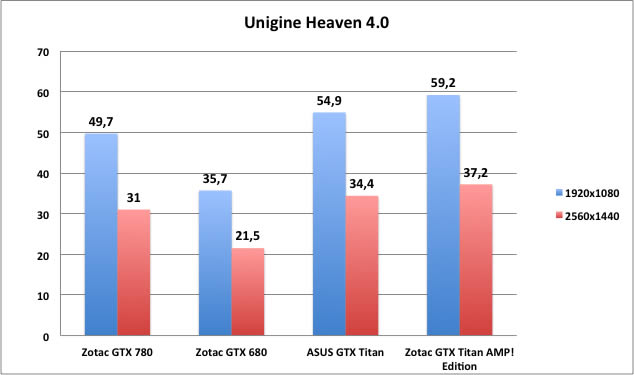 Next up is the Unigine Heaven benchmark. The difference between the GTX680 and the GTX780 is between 39% and 44%. That is some serious improvements compared to a card just 1 year old. The gap up to the GTX Titan is just under 10%. 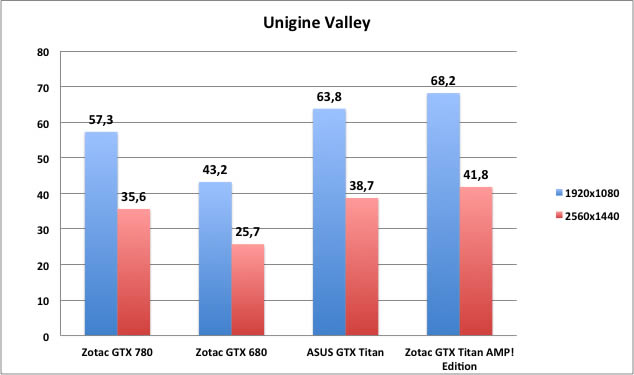 Also in the new Unigine Valley-benchmark we get a similar results with the GTX780 beating the GTX680 with around 35-40% better scores while trailing the GTX Titan around 10%. 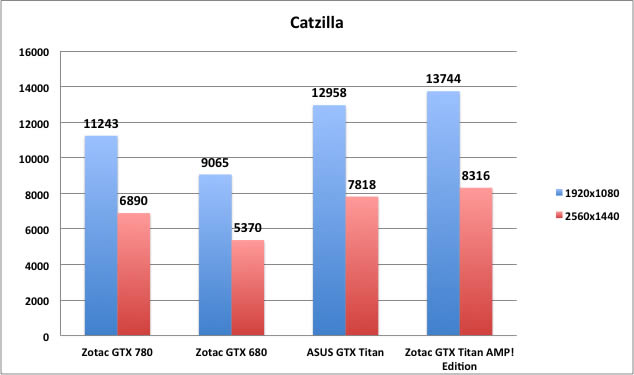 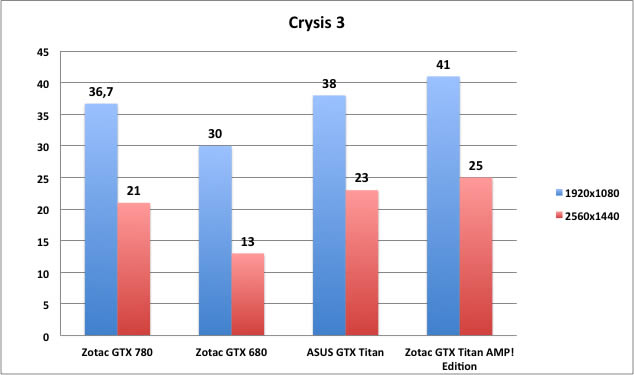 It would not be a Crysis-game if it did not tax the system a lot. As evident from the scores neither card really is playable at these settings and we would need to turn off/down a few settings to use it in the game. Still, the GTX780 can produce 25% better frames per second at 1920×1080 than the GTX 680. When we increase the resolution the difference soars up towards 65% but neither card really gives us framerates worth talking about. The difference between the GTX 780 and the regular GTX Titan is no more than 2-3% so if you plan on playing Crysis 3 you really will not win much by getting a regular GTX Titan. 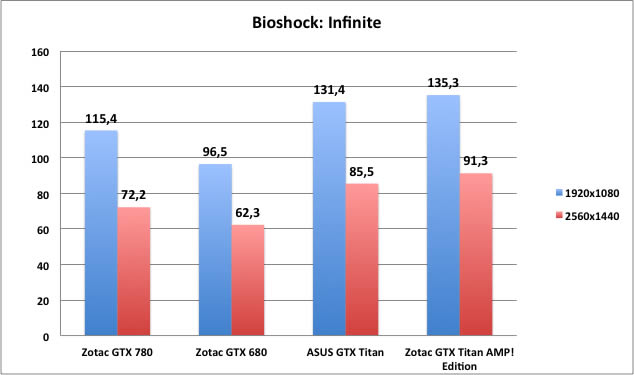 Even though this is a new game it does not really tax the system that much. The difference between the GTX680 and GTX780 is around 15-25% while the regular GTX Titan beats the GTX780 with just over 10% better framerate.

Overclocking the GTX 780 is a bit weird. Since the card already is overclocking itself dynamically via NVIDIA Boost 2 you never are sure what you will end up with when setting a target clock in MSI Afterburner or Zotac Firestorm. For example we set the card for a target clock of 1050 MHz but when we ran the benchmarks we ended up with a max clock of around 1176 MHz instead. To achieve this overclock we also increased the target temperature to around 85C and allowed the card to use 105% if the power draw.

The best overclock we achieved in our limited time with the card was 1050 MHz for the core (up from 863 MHz) and 6400 MHz for the memory (up from 6008 MHz). This resulted in between 10-20% better results in 3DMark Firestorm Extreme and Bioshock Infinite.

It is not hard to be impressed with the new Zotac GTX 780-card. It is a huge upgrade over the GTX 680 and, as expected by the hardware, is close to catching up with the GTX Titan. It is a silent card and NVIDIA:s various features like Boost 2.0 really enhances the function of the card.

What does it cost then? We have not found the Zotac GTX 780 on sale yet in the US but other GTX 780-cards retail for around 650$-680$ so expect it to cost around that. This is about 35% less than a $999 GTX Titan and you still get around 85-95% of the performance of the GTX Titan making the Zotac GTX 780 a great buy. The Titan though has 6 GB of memory which makes it a bit more futureproof for those who also want to do multi-monitor-gaming.

Previous Nvidia GeForce GTX 780: The Next Step in GeForce
Next Sapphire Edge HD4