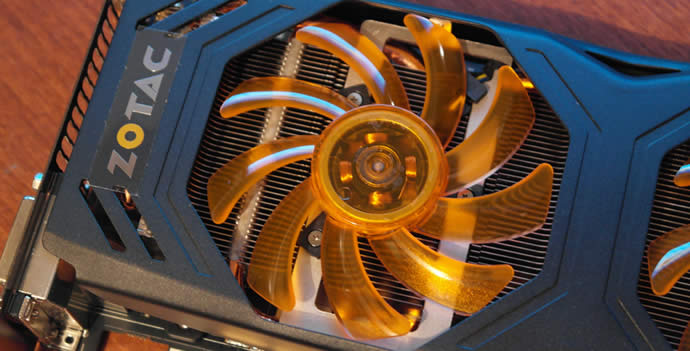 Even though the GeForce GTX 770 is a GPU in the GeForce 700 series it actually just as well could be called GTX 680 v2 as it shares a lot of hardware and features with the GTX 680. The GTX 770 is based on the same Kepler GK104 GPU as the GTX 680 uses and comes with 2 GB VRAM as default although you should see models with 4 GB later. The thing that distinguishes the GTX 770 from the GTX 680 is the memory that is much faster.

In addition to the increased memory speed we also see the same features like on the GTX 780 like Boost 2.0, Adaptive V-Sync and Nvidia Display Overclocking. We have posted a article about the reference GTX 770 where you can read more about these and other features.

So what makes the Zotac GeForce GTX 770 different from the reference GTX 770? Well, first of all as you saw from the specifications table above it has a slightly higher clockspeed than the reference card. It also comes with a different cooler. Considering how nice the stock cooler is on the GTX 780 and the GTX Titan it is odd that it is not used on the GTX 770 even though the reference GTX 770 has it. From what we have seen none of the OEM’s use the reference design, instead opting to use their own cooling. While the card is available in both 2 GB and 4 GB versions it is the 2 GB version we are testing today.

Let us take a closer look at the card. 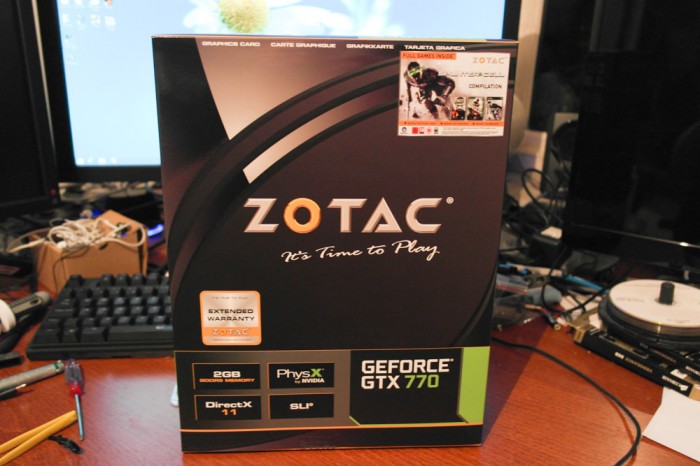 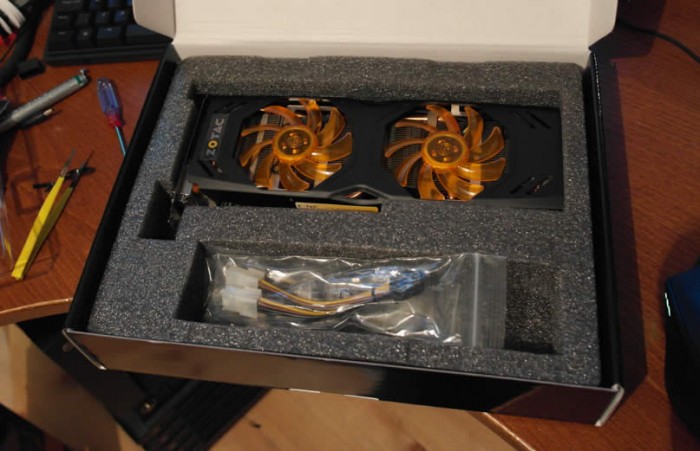 The card is well packed inside the box and should have no problems surviving a trip through the postal service. In addition to the card we also get power-adapter cables as well as a CD with driver (320.08), the Zotac Firestorm-software and some more software like xbmc. 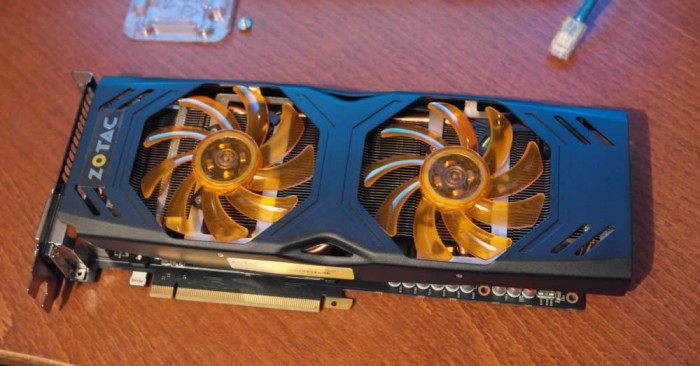 It is immediately obvious that this card does not use the reference cooler instead using a “dual-silencer” cooler. We found the name apt as it was very quiet while gaming. 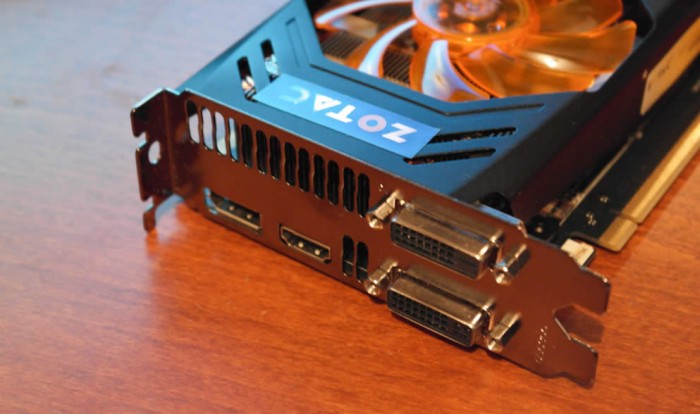 We get 2 DVI, 1 HDMI and 1 DisplayPort-connectors on the card. 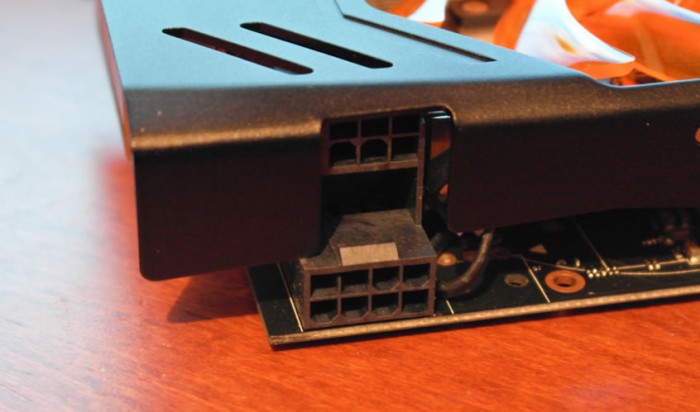 A 6-pin and a 8-pin power connector is necessary to power the card. Zotac includes molex-to-pci-e-power adapters if needed.

We will use the following applications to benchmark the performance of the Zotac GeForce GTX 770 video card. 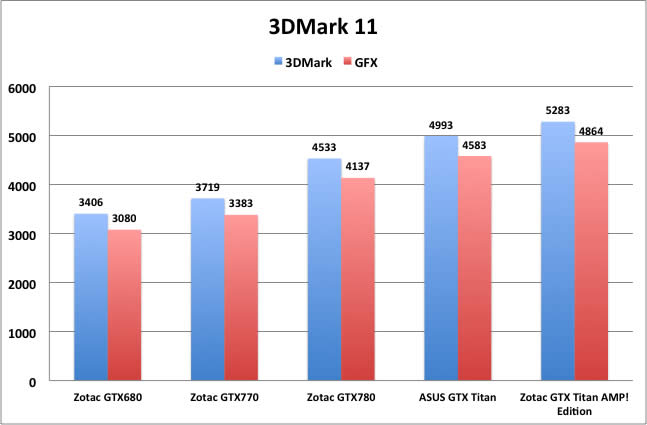 The new Zotac GTX 770 narrowly beats the GTX 680. Considering that the GTX 770 is supposed to replace the GTX 670 it is a nice result. 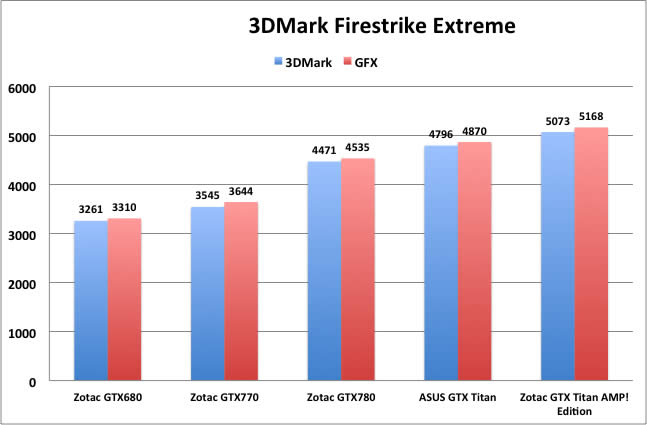 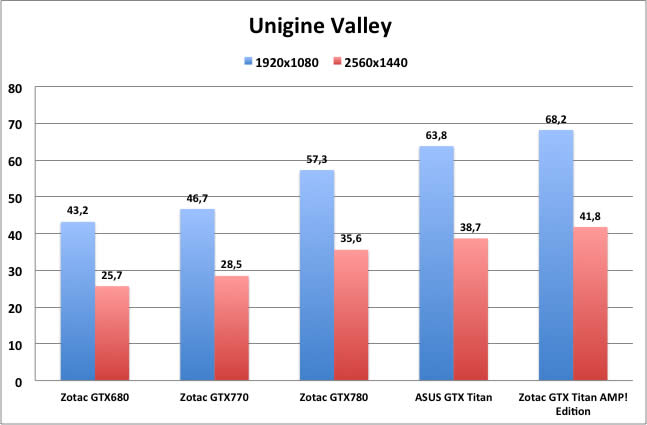 In the new Unigine Valley-benchmark the GTX770 scoresa bout 8% better than the GTX680. 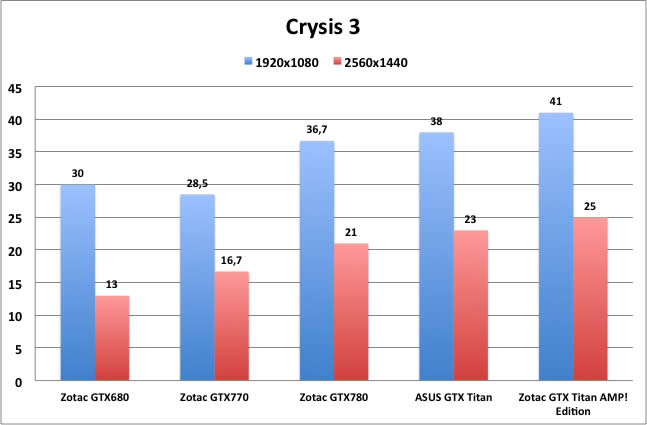 It would not be a Crysis-game if it did not tax the system a lot. As evident from the scores neither card really is playable at these settings and we would need to turn off/down a few settings to use it in the game. At 1920×1080 we actually see a slight decrease in framerate compared t the GTX680 but we almost chalk that up as a outlier as every other benchmark shows the GTX 770 beating the GTX 680. There is a almost 30% difference at 2560×1440 between the GTX 770 and the GTX 680 but at those low framerates even 1 fps difference means a lot of % change so it is not as much as it sounds. 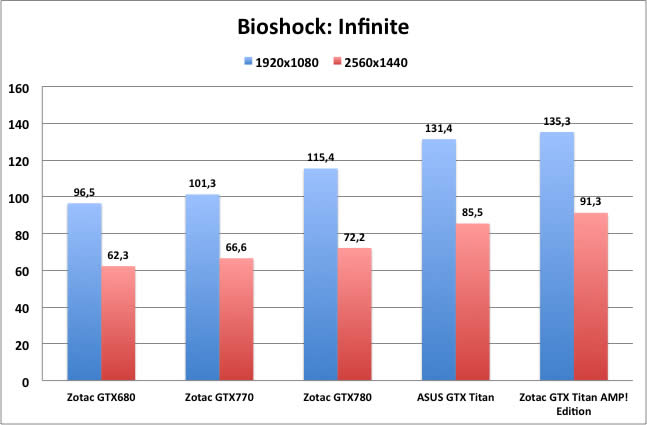 In Bioshock: Infinite the difference to the GTX 680 is just around 5 %.

Overclocking the GTX 770 is just as weird as the GTX 780 and the GTX Titan. Since the card already is overclocking itself dynamically via NVIDIA Boost 2 you never are sure what you will end up with when setting a target clock in MSI Afterburner or Zotac Firestorm. We did a quick test to overclock this card and increased the target temperature to around 85C and allowed the card to use 105% if the power draw.

The best overclock we achieved in our limited time with the card was 1162 MHz for the core (up from 1059 MHz, ~+9.8%) and 7600 MHz for the memory (up from 7010 MHz, +8.4%). This resulted in around 8% better results in 3DMark Firestorm Extreme and Bioshock Infinite. We had no problems with instability at these levels and we are actually sure we could have pushed the card up even higher given time to experiment a bit.

The Zotac GTX 770 is a great card. True, it really feels like an GTX 680 on steroids and some might feel it is deception from Nvidia to call it GTX 770 since it is so similar to the GTX 680. But if we are honest there is not much to complain about. What Nvidia has done is to take the top single-GPU card of the previous generation, added some more performance, updated it with new features and then rebranded it as a mid-end card in the new series. And we should be fine with that because it offers us consumers a lot of value.

Even though we might have preferred the stock cooler of the GTX Titan and GTX 780, which is used on the reference GTX 770, we can’t deny that the “dual-silencer” cooler works well and keeps the card cool without making much noise. The included Splinter Cell-bundle is also nice. What impresses us even more is that the price of the Zotac GTX 770 is around $399 while a Zotac GTX 680 from the same e-tailer (Newegg) cost $460 or even more. So basically we get more features, more performance for a lower price.  We of course do not think anyone with a GTX 680 would like to upgrade, the difference is not big enough – that is what the GTX 780 is for, but for GTX 670-owners this card is a great upgrade.

What is not to like about a card that costs less than the GTX 680 while offering a bit more performance, more features and all at a lower price point?