Kingston as a whole has been around a long time, but they created the HyperX brand when they realized there were people that wanted to push the limits of their system memory in order to increase performance. That was a long 10 years ago and the kit we have today is a special celebratory kit showing that 10 years has brought the HyperX line a long way. Let’s see what ten years has done and what improvement Kingston can offer from this experience.

Kingston has been a mainstay in the memory market for as long as we can remember building PC’s and that goes way back. They have been in the forefront of building modules especially in the value segment with their KVR, or Kingston Value Ram, for a very long time. Some time after Kingston noticed that with performance increasing and the ability to tune and tweak a system on the rise they had to offer memory to meet this growing crowd and with that HyperX brand was born. HyperX modules are screened and specially tested for the upper end and even mainstream performance user who simply cannot play at stock. This goes from the regular gamer to the high end benchmarker who dumps LN2 on everything and cranks the speeds to record breaking levels. With this very kit, Kingston is celebrating 10 years of giving performance enthusiasts what they need to make their system go. 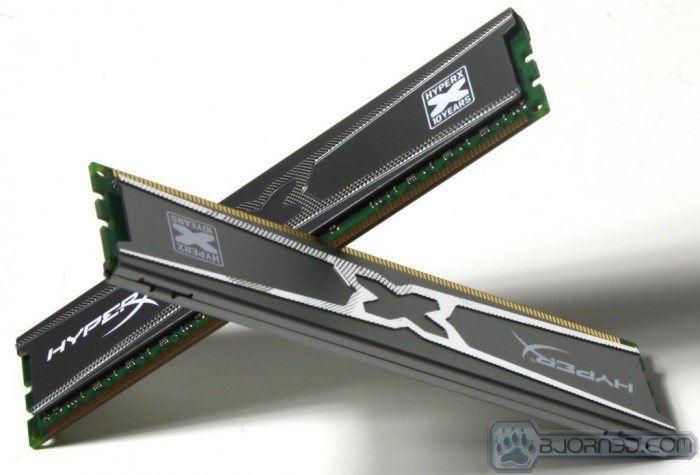 As we have seen before, when you start getting to the higher memory frequencies a higher clockspeed on the CPU is needed to see the increase in performance, which is why these are considered “enthusiast” modules. The new Ivy Bridge platforms are simply so efficient and run so well that pushing a huge memory frequency nets marginal results. To see the full potential of these modules you really do have to overclock the CPU a bit to see them running without a bottleneck slowing them down.

The 16GB kit you see here retails at Newegg for $129.99 at the time of writing, which when compared to other 4x4GB 2400 kits is a bit of a value as the next best kit is found at $144.99 for a 2400MHz kit at 16GB capacity. Also being 16GB capacity means that this is a great kit for most gamers as we have seen an increase in memory usage in this generation of hardware as PC’s are used so much more for so many things that even just having lots of browser tabs open can eclipse 6GB of ram or more, especially with memory heavy programs like photoshop becoming more prevalent. 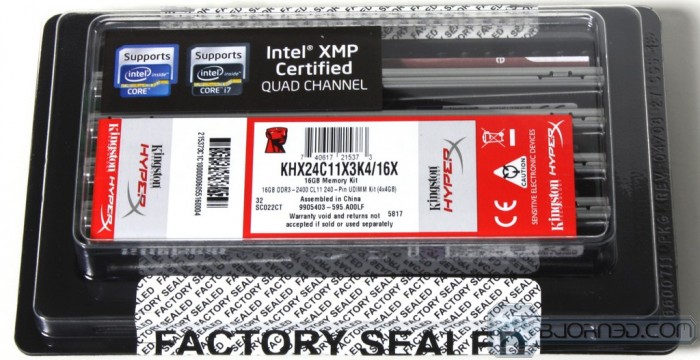 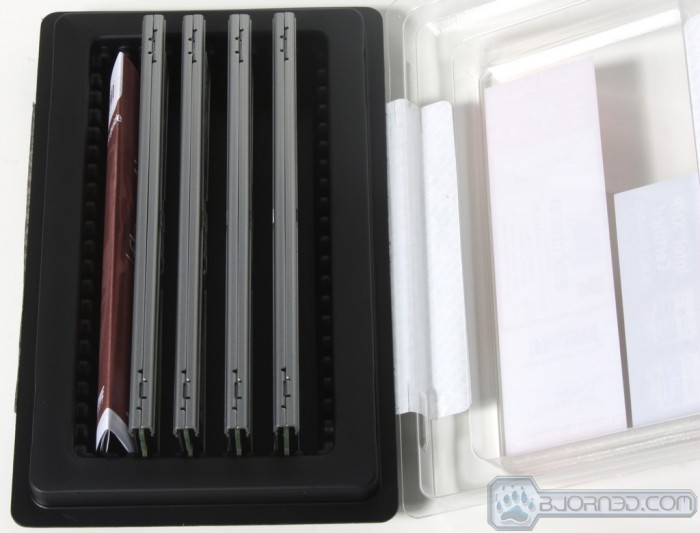 This module kit comes just like many Kingston kits we have seen in the past. The main tray is opaque black plastic with alignment notches that retain the modules in place during shipping and also help avoid damage to a certain extent.

Here are the modules—very simple at first glance with a special design heatspreader to commemorate the 10 year anniversary. What’s special are the 2400MHz capable IC’s underneath. Overall we like the fact that these are standard height modules as this means no fitment issues with larger tower coolers, since now days many “performance” memory modules have huge heatsinks on them. Most of the time, this is more for show than function as DDR3 is low enough power that thermal dissipation is adequate with bare IC’s and moderate airflow, whereas heatspreaders can actually trap heat in some cases. Sometimes less is more and in this case these modules are simple and sweet.

These modules as you can see are XMP profiled for 2400MHz with reasonable but slightly looser timings. This should ensure compatibility with most all boards and also be a little easier for a weaker IMC as we have seen many Ivy Bridge CPUs which simply have weaker memory controllers; these looser timings are many times able to run on an even weaker chip. As we have noted before the amount of IMC’s over a certain level are much less common and therefore a looser setting will tend to allow much better compatibility across more configurations.

One thing to note right off the bat is that anything past 1600MHz-1866MHz will not net you anything on a stock clocked 3770K. The architecture is just too efficient and therefore the higher memory frequency simply cannot be seen without the CPU moving a bit faster. In order to make this a simple play for anyone who might try this, we did the simple (or EZ) overclock supplied by the ASUS Maximus V Formula, labeled “Gamers Overclock”. This placed the CPU at a nominal frequency of 4.8GHz. When we tested the memory first at stock speeds the difference between SPD 1600MHz C9 was not there it was a marginal to non existent change no matter the benchmark.

The memory is binned quite nice where it sits but moving to next divider required loosening of the timings in order to run correctly which caused a decrease in performance. Moving to BCLK, we were able to get the modules right around 2600MHz with the stock XMP timings for a small bump in performance but for the marginal gain we think most users would be happy to just set the XMP profile and run it. At 2400MHz, your system should already be well beyond any memory bottleneck so there really is no need to push it further unless of course you’re benching, but we really don’t think that’s what this kit is for to begin with.

We also tried tightening up the modules a bit as we have seen in the past Kingston will run the modules a little loose for compatibility when in reality they can be pushed tighter for better performance. These definitely did not disappoint as we were able to drop the stock 11-13-13 to 11-12-12 and retain full stability and it even improved performance via benchmarks a bit too. 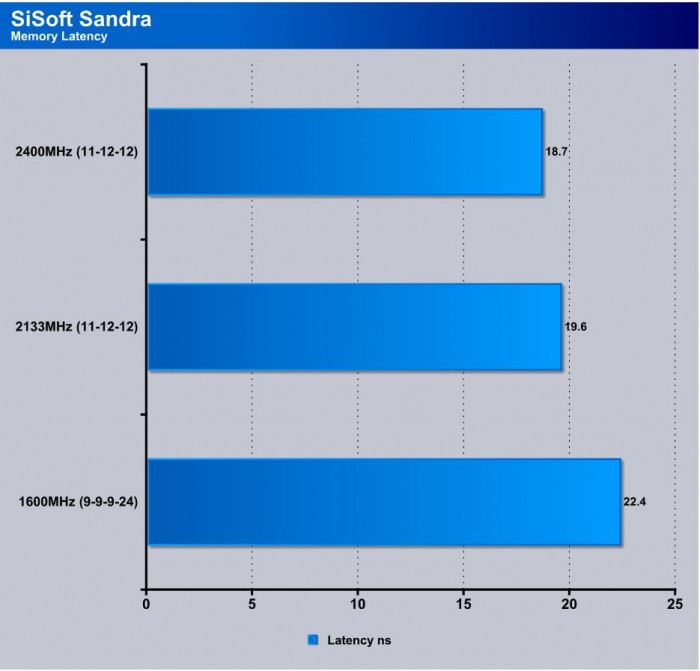 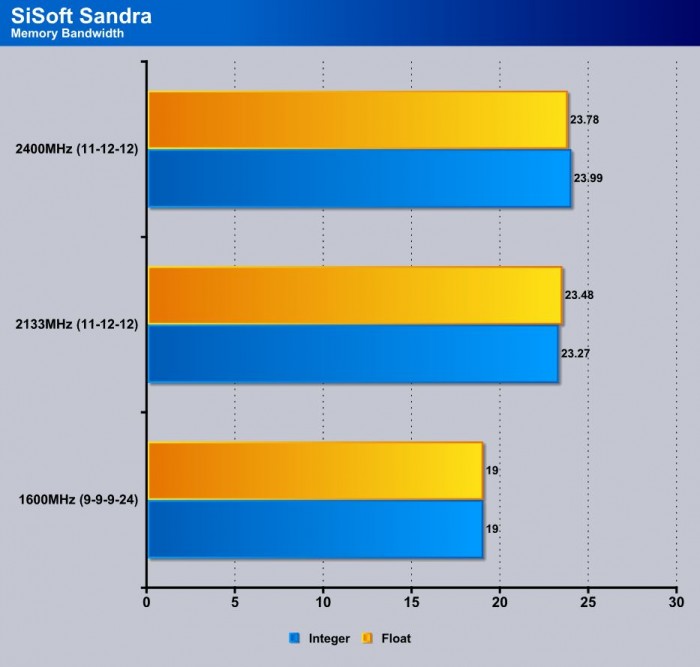 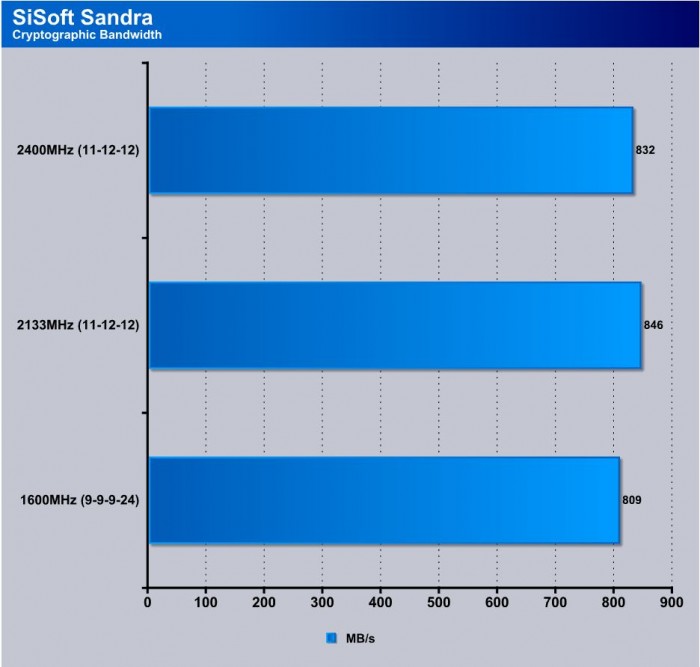 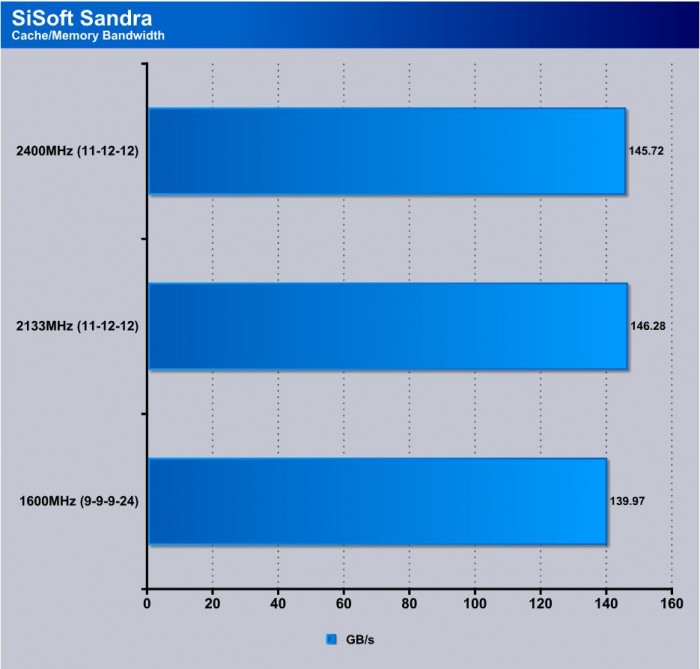 Here you can see that moving from the 1600MHz SPD to 2133 gives a nice gain, and moving to 2400 with lower than XMP timings gives another gain albeit quite small. Still, when we are talking compute operations over the long term, those small gains can pay big dividends. 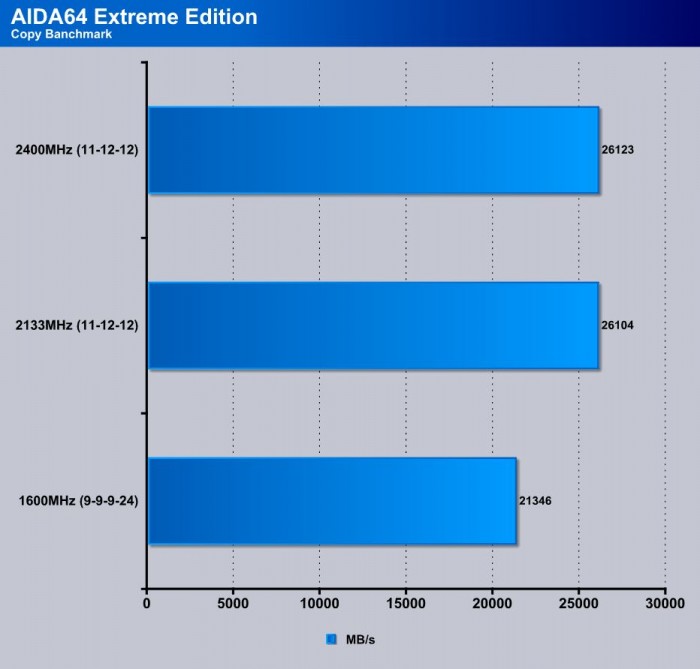 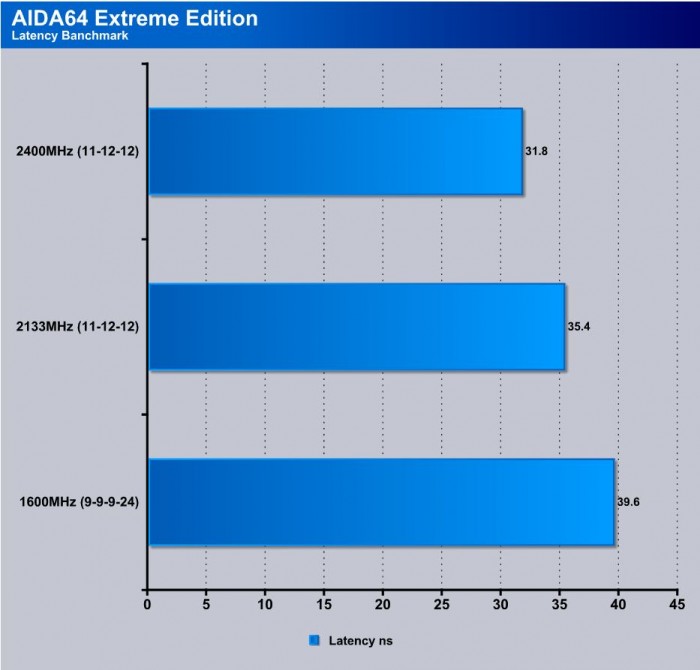 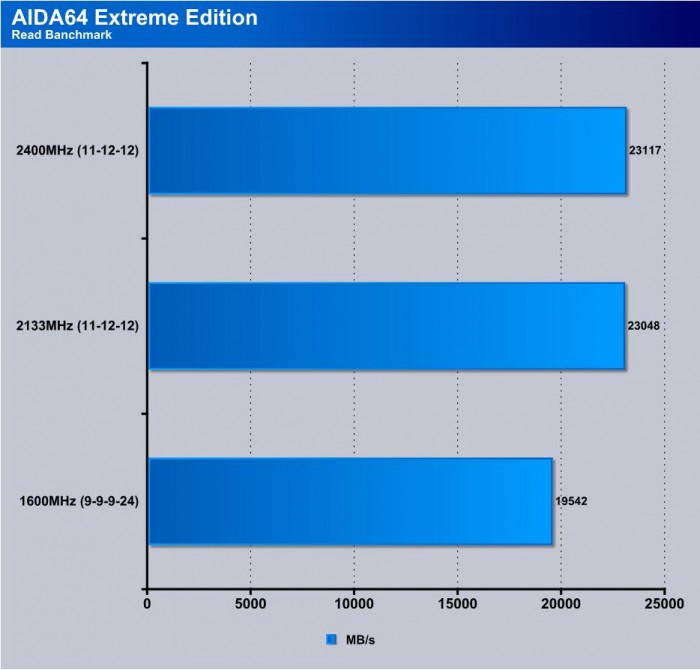 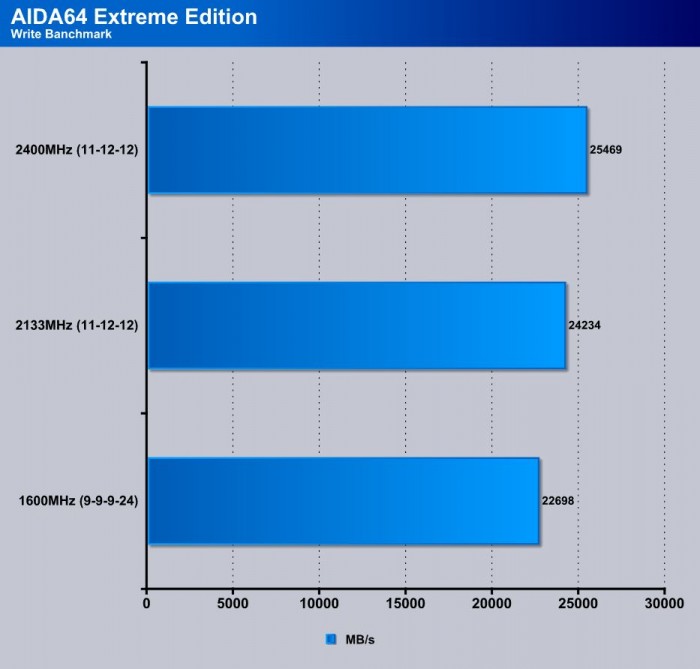 AIDA64 shows similar results as the jump is huge from the SPD default to XMP profile. We also see latency get a nice bump which will help with the responsivemness of the system and ability to initiate work and transfers faster. Overall a good result for a few minutes of tweaking. 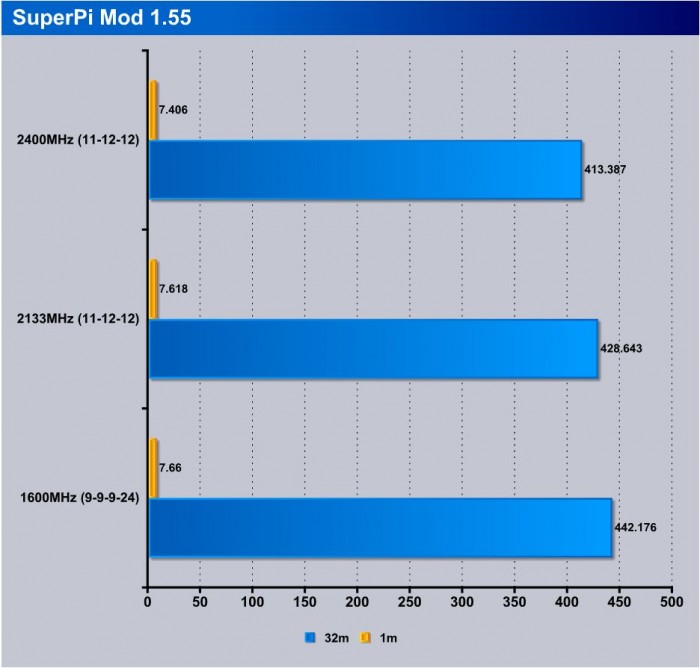 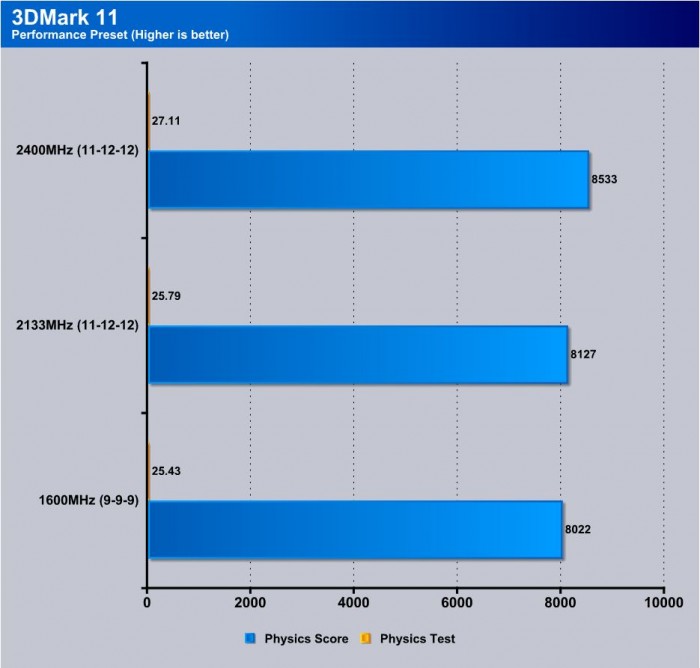 3DMark 11 is a nice synthetic benchmark which represents 3D gameplay. For this we are using the integrated HD4000 running at performance preset and we am only interested in the Physics score and test results. This is a CPU bound test and there is some gains seen by the increases of memory speed and also tightening up the timings where available. 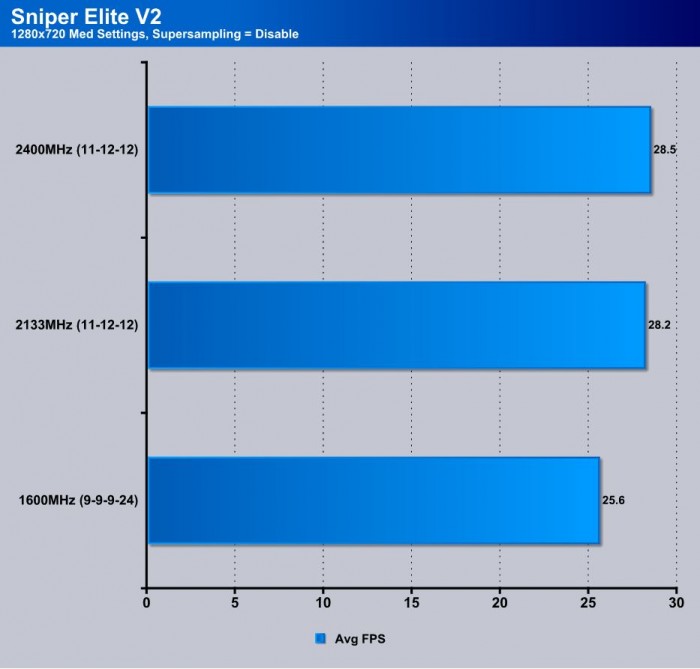 Sniper Elite V2 is a newer game we just recently added to our testing, so we went ahead and threw it in here just to see if it added any performance in real world gameplay. As you see here switching to XMP does make a difference and the FPS gain is pretty decent at almost 3FPS. moving a little further with frequency you can see that the gain is not large and that is because the botttleneck is no longer on the memory and more on other components, but there is still a gain which tells our that you can see benefits especially as programs become more memory intensive.

When we received the 10th Anniversary kit we weren’t sure about it as it has a very mild mannered appeal to it. Nothing jumps out at you—it’s just plain heatspreaders with a little 10th anniversary bling to it. We knew they were 2400MHz but we also know that high of speed is only going to benefit in a major way in benchmarks. As more applications start to use more memory we can start to see real benefit as CPU memory controllers get better the ability to do work is just going to increase.

The price point on these put it at the cheapest 16GB 2400MHz kit we could find which makes it a very good buy, and since it’s a limited edition kit, it adds a level of exclusiveness to it.

All in all, if you’re building a production or high end gaming system there is no reason at all why you would not want to use this kit.

Final word is, these modules do what they say have some performance left on the table if you want to tweak them and are a worthy upgrade for any high performance gaming rig or production machine.