The ASUS GeForce GTX 660 DirectCU II cooler and SAP components combine every time to make for a great overclocking experience. This is no different with the GTX 660 as the slider keeps moving to a final stable clock of 1135MHz which is quite good at about 15% overclock.

The memory was similar as default is already past 6GHz frequency but the card easily clocked past 6800MHz to a final stable frequency of 6840MHz which is a sizable 13% overclock.

These overclocks are completely stable across game testing and benchmarks and while the card may pull a little further for short benchmark runs this is the max we could get to be considered fully stable. This could easily enable a few extra frames and give a much smoother gameplay for a gamer who might have been on the edge previously. This and the fact that I’ve never been one to complain about free performance so i’m not gonna start now.

The DirectCU II cooler worked excellently as the fans stayed nice and quiet throughout the runs and even when overclocked it swallowed up the heat and kep chugging along without issue. 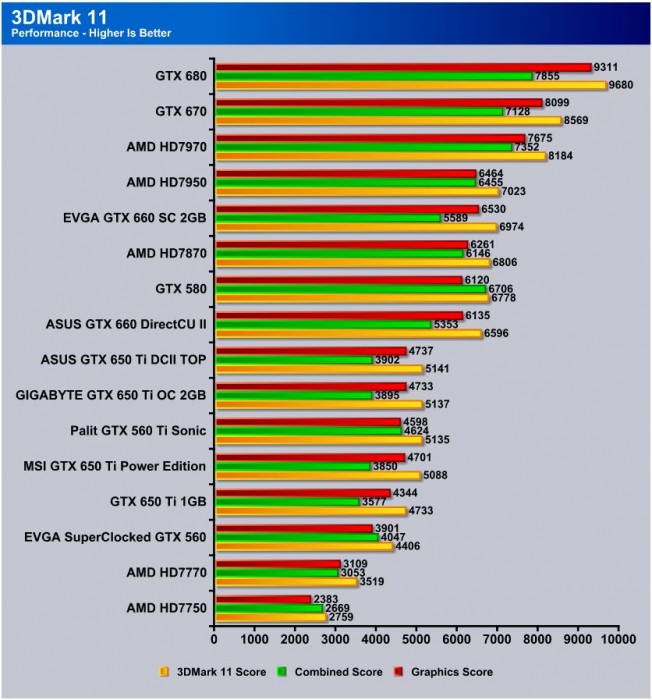 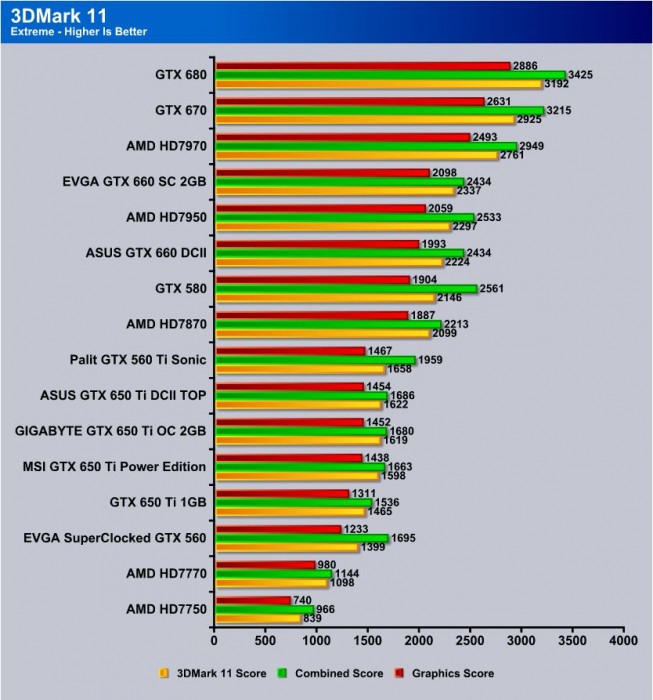 3DMark 11 shows a nice picture of where each card falls in line coming from our testbench. The GTX 660 DCII falls right in line above the 650 Ti and below the 580 in the performance preset. The extreme preset lets the 660 DCII’s 2GB of frame buffer shine as it pulls ahead of the 1.5GB 580 and further distances itself ahead of the 650 Ti. 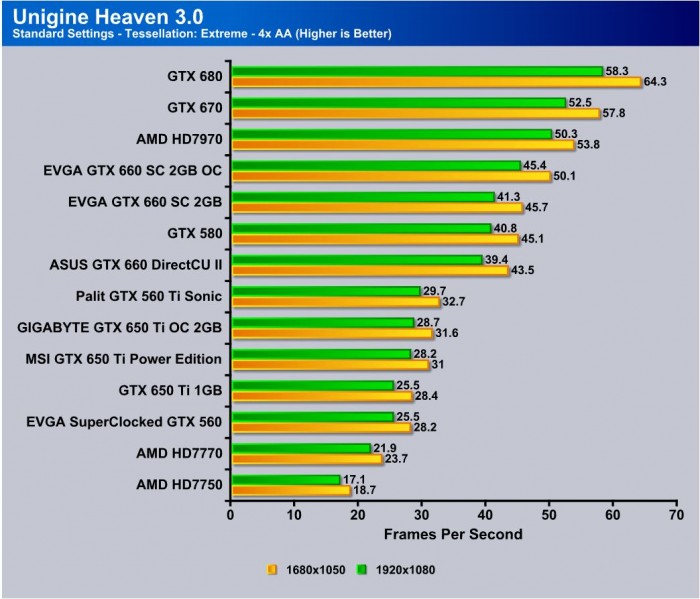 Here we see once again the 660 DCII jumping ahead of both the GTX 560 and 650 Ti and nothing in just on the heels of the 580 which is not a bad place to be as this card is roughly half the price of the 580 at launch. 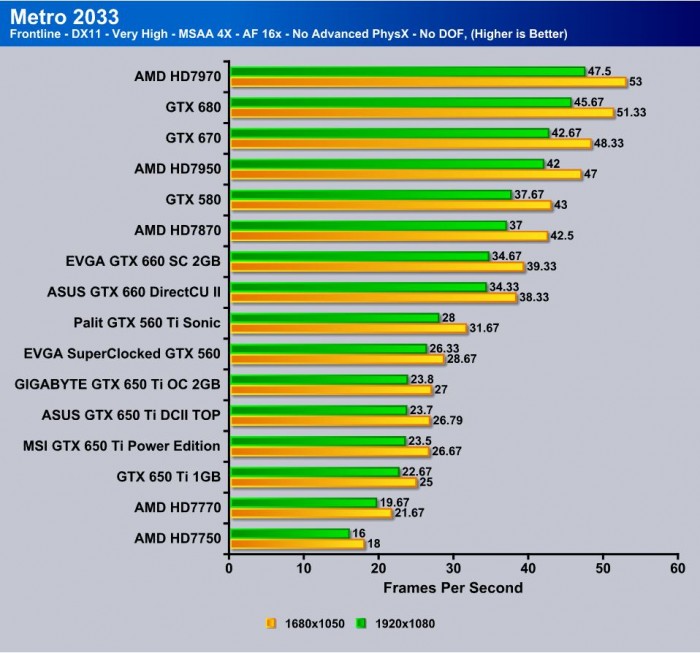 Metro 2033 has always been extraordinarily stressful for GPU’s, and this has not changed with time. Here you can see the ASUS 660 offering actually creeping very close to the EVGA SC card by just a a frame at 1680×1050 and even less at 1080P which is not bad at all and I can imagine with the overclock the ASUS card could easily jump up even more. 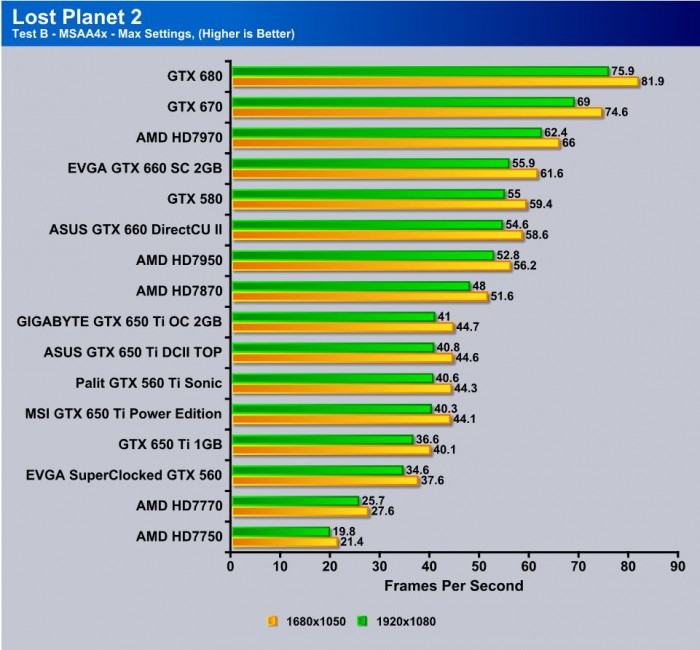 Lost Planet 2 shows a definite trend here as the 660 DCII hangs right in position just nipping at the heels of the previous gen flagship 580 and well ahead of one of AMDs premier performers the 7950! This little 660 is proving to be a real winner in teh price for performance category. 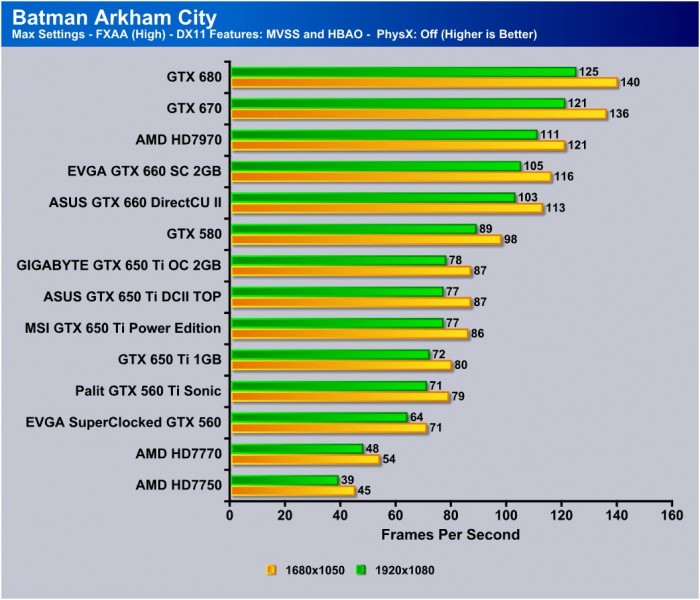 We tested Batman Arkham City and once again the 660 DCII finds itself in a power position actually beating out the 580 by a decent margin with over 15 FPS difference and that is quite alot for a card of this pricing and position. 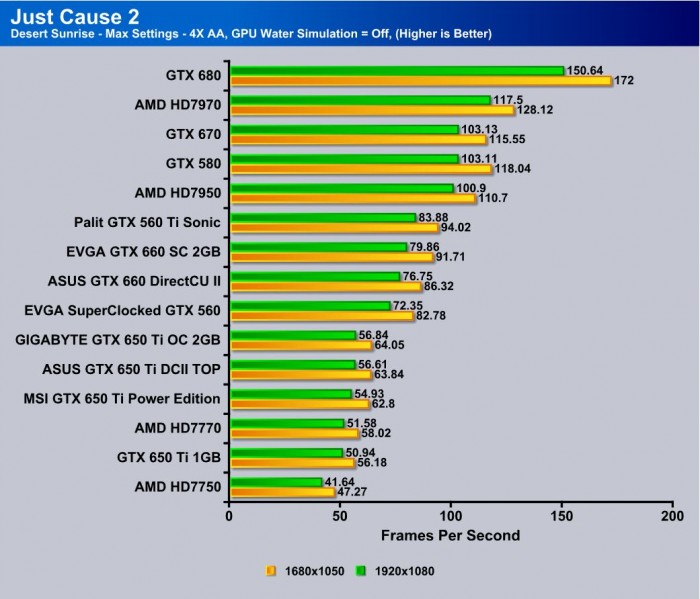 I just had to test Just cause 2 as it is an awesome game with some very good visuals. The 660 pulls off a respectable performance but this time it falls a bit behind the 580 and even the previous gen 560 Ti as it seems this game is very friendly to the older architecture. But even with this considered the 660 pulls of a nice showing with very playable frame rates in excess of 60 FPS average which means it should be nice and smooth. 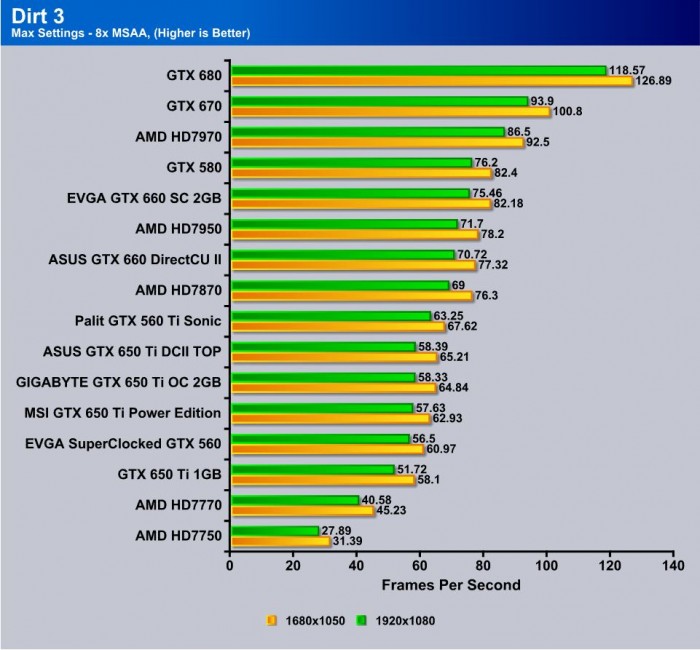 Dirt 3 is a great game for visuals and yet pulls very reasonable framerates on most cards so the 660 DCII pulls over 60 easily. and beats out the 560 Ti this go around but is at the heels of the 7950 and 580 this time. This is not bad company to have as these are top level GPUs and that means this is one excellent performer.