We did disable throttling back past 3.33 GHz, we don’t want to read the idle at a reduced voltage at a speed below 3.33 GHz, we know the coolers will handle the reduced idle speed and voltage. We want to measure from the stock speed of 3.33 GHz, 3.6 GHz boost speed and a mild overclock of 4.0 GHz on the intel 980x Hexacore.

The custom water loop we used for comparison is a single 360mm Swiftech with a Swiftech mini res with Swiftech MCP655 adjustable run at full speed. The waterblock is the Swiftech 1366 block Apogee model. The fittings and hose are half inch, hose is nothing special but hardware store 1/2 inch pvc.

We tested against air cooling, but saw no need to document it here, as it is obviously a lopsided comparison. 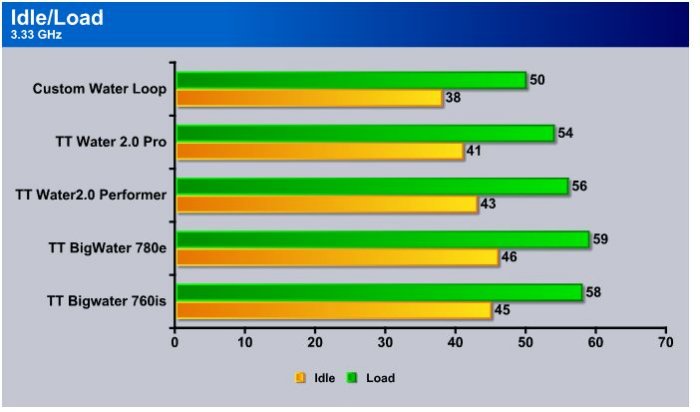 We are testing water against water here, as testing against air coolers would be an obviously unfair comparison. 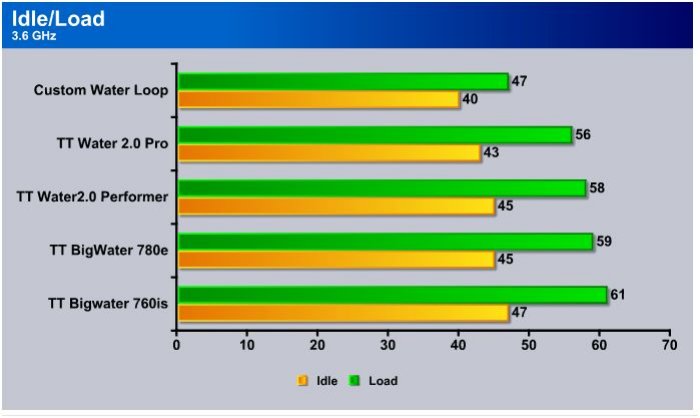 We manually set the CPU to 3.6 GHz top end and ran Prime 95 to stress all 6 cores, as expected the custom water loop with the 360mm radiator top top honors (and also top price and most labor intensive). The Water2.0 Pro was a couple of degrees cooler than the Water2.0 Performer. The older Bigwater units were close but still lagged slightly behind. 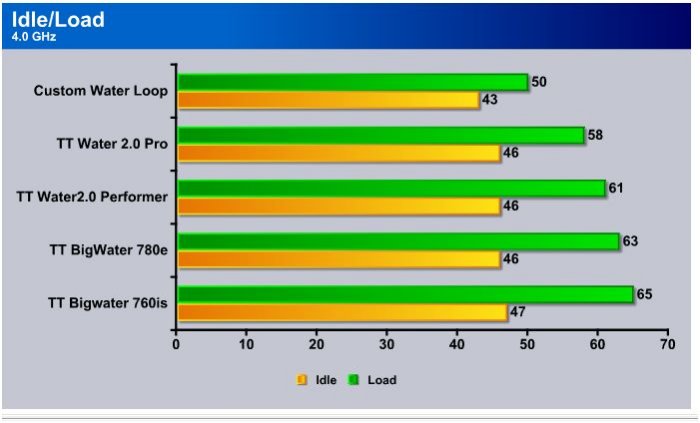 Pushed to 4.0 GHz a mild overclock on our Intel 980x Hex the custom water loop pulls easily out ahead of any prefab water cooler. The Water2.0 Pro ran 8°C degrees hotter on load than the custom water loop. The Pro and Performer tied on idle temperatures but the Pro having a larger water Vane area (internal) was 3°C cooler. The older Bigwater units lagged slightly behind as they have during the entire testing procedure.

Let’s face it: Thermaltake mixed aluminum and copper in the same water cooling kit, and mixing the two metals is considered a cardinal sin.  A galvanic reaction will occur and metal will transfer from the radiator to the copper portion of  the water block. In time, that will affect the performance of the kits.

Neither of the kits really brings anything new to the table, and has the same aluminum radiators Thermaltake has always used. Same rubber hoses so what we are seeing new is socket coverage. The on-block pump could be considered new but Swiftech has been doing that for a while now.

We like the ease of use, the extra headroom over the stock air cooler was rather nice. The kits aren’t designed for the enthusiast overclocker but stood up to a 4 GHz over clock on a 1.17 Billion Transistor Intel 980x Hex. The installation was easy and depending on your setup you may not even have to remove the motherboard.

Noise was practically non-existent and controllable through the 4 pin pwn fan connectors if your BIOS supports adjustable fans. We would prefer to see an in case or IO port physical controller but that would likely increase costs. In most cases aftermarket fan controllers are easily obtainable but would add cost to these kits.

What we like best about the kits is the ease with which Water cooling beginners can install and use them. We also like the price.  At the time of this review the Performer runs $79.99 and the Pro Runs $99.99 with free shipping (NewEgg) there are applicable rebates but don’t count your rebates before they are hatched (excuse the NewEgg pun).