OCZ ditched the SandForce controller in their Vertex 4, instead opting for their own Indilinx Everest 2 controller. How does the new controller perform compared to others? Can it carry the Vertex brand to the next level?

Although SSD technology has matured  over the last few years, it is still relatively new and no single manufacturer has yet emerged as the clear winner dominating the market. A few years ago, Intel was projected to take that role, but since then, SandForce, Marvell, and Samsung have emerged as the top three performance/enthusiast controller. Interestingly, it was Indilinx’s Barefoot controller  that came out of nowhere in 2008 to challenge Intel for the crown. However, Indilinx has been relatively quiet since it burst into the scene, finally being acquired by OCZ.

It makes perfect sense for OCZ to acquire its own SSD controller. The more aspects of product design a company has control over, the fewer issues crop up, and better compatibility is ensured. SSD performance is dictated by the controller, the NAND devices, and the firmware. Controlling all three would mean the ability to maximize performance by tightly integrating the hardware and the software. That is why OCZ acquired Indilinx. OCZ is able to use the in-house controller paired with their own firmware. While OCZ still relies on a third party for their NAND chips, having their own controller means they don’t have to rely on another company to deliver performance. It also lets OCZ stand out among the different SSD makers as one of the few companies that own and design their own controllers. Furthermore, since OCZ now has the control over both the controller and the firmware, they should be able to provide much quicker fixes to any bugs and also able to further fine-tune their drives at both levels to maximize performance. 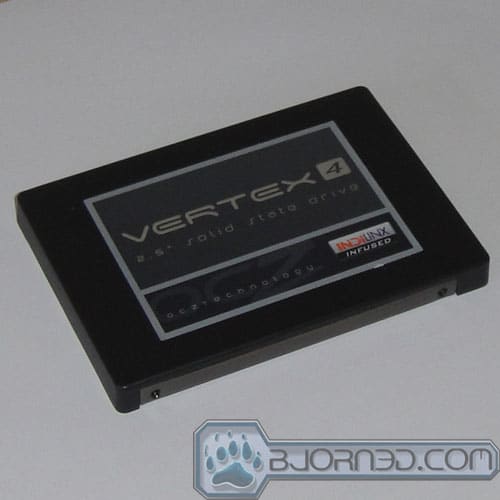 OCZ’s partnership with SandForce controller has helped the company to firmly place its name in the enthusiasts SSD market with the drives like the Vertex 2 and Vertex 3. The Vertex 4 ditches the SandForce controller and uses OCZ’s own Indilinx Everest 2 controller. While no one doubts OCZ will put a greater emphasis on the Indilinx controller from now on, it is quite surprising to see OCZ adopted it so quickly and used it in one of their best-selling products. The Vertex series drives have been regarded as the best performing SSD on the market and it is unlikely that OCZ wants to damage their own reputation and brand. This is highly indicative of OCZ’s confidence with its latest controller. 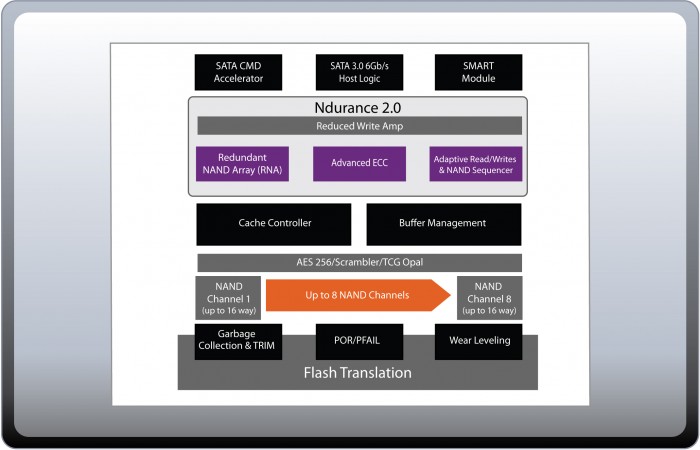 The Vertex 4 is not the first SSD with Indilinx Everest controller after OCZ’s acquisition. In fact, OCZ had launched the Octane drive a few months ago using the first generation Everest controller. The Vertex 4 uses the second generation Indilinx Everest controller that has been fine-tuned for higher performance up to 120,000 random IOPS and features improved NAND flash management, called Ndurance 2.0, for extending the NAND flash life and SSD reliability. The Everest 2 controller can achieve sequential bandwidth of up to 535 MB/s, 4K random read up to 95K IOPS and random write up to 85K IOPS. 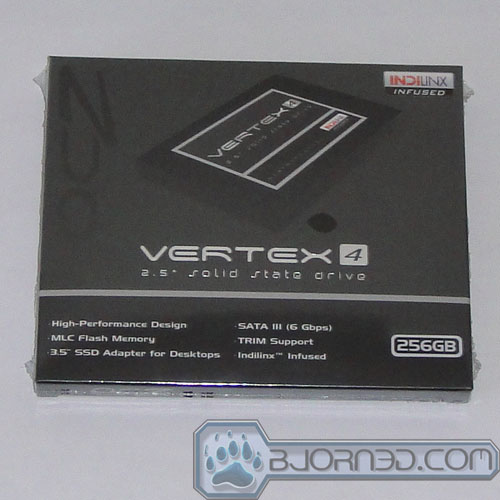 Available in storage capacities from 64GB to 512GB, the drive uses  2xmm Synchronous MLC. Our 256GB drive has a rated sequential read of 550MB/s, sequential writes of 465 MB/s, random 4K read of 90K IOPS, and random 4K write of 85K IOPS. It appears as though OCZ is able to squeeze a little bit of performance through its firmware optimization, and is able to achieve 555 MB/s sequential write even though the Everest 2 controller is officially rated with 535 MB/s. 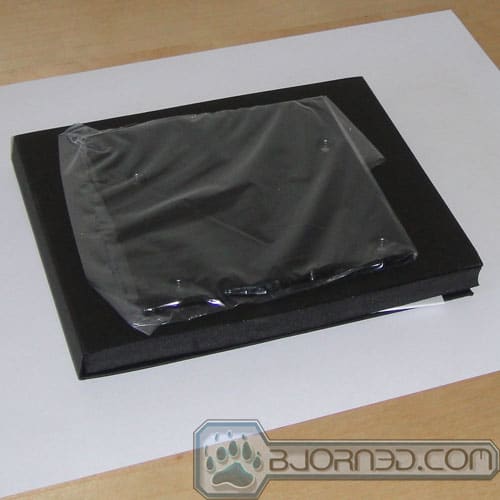 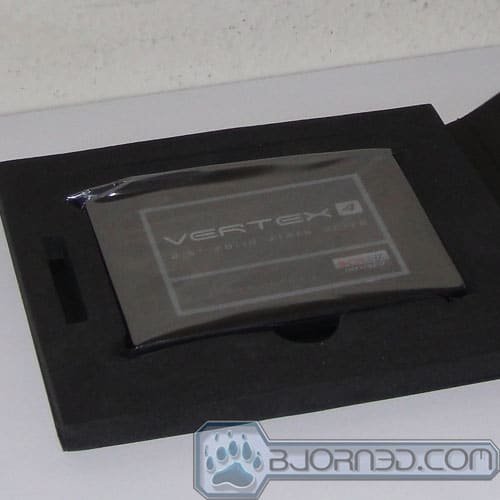 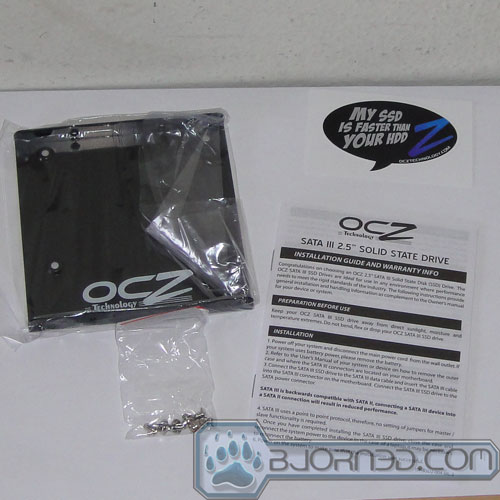 The Vertex 4 is packaged in the same packaging as previous drive. If it weren’t for the logo and the Indilinx mark on the corner, it would be hard to tell it apart from Vertex 3. Opening up the box we see that OCZ has included a 3.5” adapter, a bag of screws, a sticker and an Installation Guide and Warranty Info sheet. 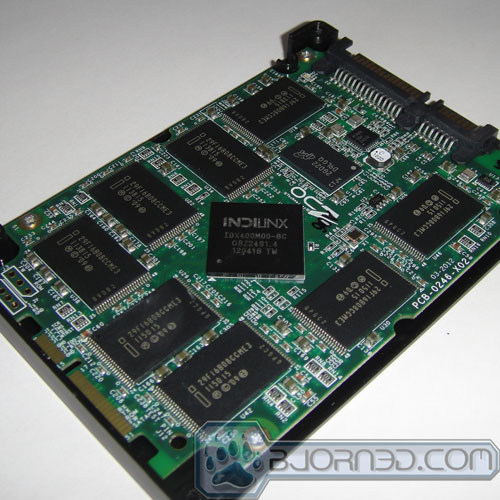 Inside the Vertex 4 we can see the Indilinx Everest 2 controller is being surrounded by eight dual-die packaged Intel 25nm MLC 16GB synchronous NAND devices  (29F16B08CCME3). Eight more devices are underneath the PCB for our 256GB drive. The Everest 2 controller supports ONFI 2.3 and  Toggle Mode NAND 1.0. It is possible that in the future, we may see drives that uses Toggle NAND but for now the drive will only be using ONFI NAND.

Looking at the image above, you will see there are actually a gold contact points on the edge of the PCB that look like mSATA or mini PCI-E connectors. We are not sure what they are for but it is possible that OCZ is working on a version of the drive that will support either interface that will come to the market int he near future. 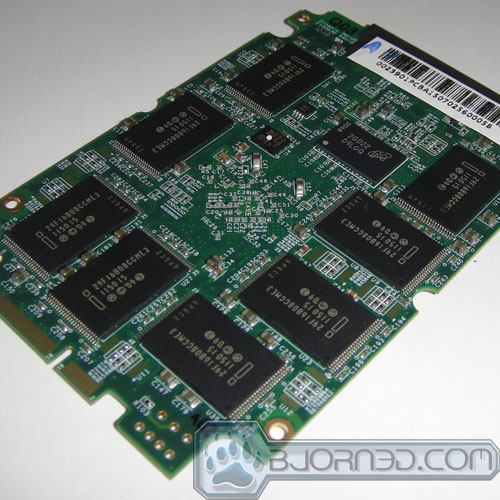 The drive is equipped with two 256MB DDR3-1333 (2GD22 D9LGQ) for a total of 512MB cache onboard. It appears that OCZ has not fixed the amount of DDR3 on the Vertex 4 drive as we have seen reviews online that some drives will come with 1GB of memory while others may have 512MB. Also, the speed on the memory varies as well; there are some drives with memory speed at 800MHz, 1066MHz or 1333MHz. Since the Everest 2 controller supports DDR2/DDR3 800MHz, the faster speed DRAM will not gets you extra performance. OCZ simply uses whatever is available at the time or whatever makes most cost-efficient when building the drive.

Looking at the specs sheet, the Vertex 4 certainly delivers very competitive numbers compared to the SandForce SF2281 drives. We shall see if it is able to keep its promise.

The drive comes with 5 year warranty, up from 3 years that is found on the Vertex 3. Three years seemed to be the industry standard but lately we have seen a few manufacturers are providing drives with 5 year warranty such as the Intel SSD 520. It is good to see a longer warranty period since it indicates the manufacturers’ confidence in their products. This is specially bodes well for OCZ’s confidence with the Vertex 4 and its new Indilinx controller. While warranty does not guarantee a product’s reliability, it is nonetheless good to see longer period.

To test the OCZ Vertex 4 we cloned our test rig drive to the SSD. It is the same test drive we’ve been using on all of our drive testing and is nothing more than a clean Windows load with all the drive testing software installed, as well as all the current drivers and patches for the OS. It’s the equivalent of doing a fresh load of Vista from the disc but takes a lot less time and ensures that every drive tested uses exactly the same OS load and drivers. Nothing that may effect the outcome of the testing procedure can creep in. We ran all of the tests a total of 3 times and averaged those results. The Average of the three results are presented here. In the case of a pictorial benchmark we ran the bench 3 times and picked the median result. As with most SSD testing differences from run to run are minimal and the median result is a good indication of what you can expect from the drive.

We ran our usual battery of tests on the drive, and used it as the primary boot drive during testing. All of the drives tested were used as the primary boot drive during testing. That’s a more realistic test than strapping the drive in and testing it with a bare format or as a non-boot drive and it represents real life transfer rates, much like you can expect when you install and operate the drive in your own system. Each test was performed 3 times and the average of the 3 test run is reported here.

While most desktop workloads do not use more than a few queue depth, we always include the higher queue depth to show the drive’s potential. Here we can see the Vertex 4 is able to achieve 346 MB/s random read and 312 MB/s random write. The random read trails behind the Crucial C400 drive but is 20% faster than the SandForce drives. Even at this high queue depth, the Vertex 4 still dominates the random writes by 25%.

At higher queue depth, the Vertex 4 once again shines where it is 30% faster both read and write than the fastest SandForce drives.

The results from the Crystal DiskMark pretty much mimic what we have already seen with Iometer and the AS SSD.

As always, we include the PCMark 07’s storage benchmark as a way to gauge how a drive performs in typical workloads. Here, the Vertex 4 scored 5194 points, just a few points below the Crucial C400 drive. The SandForce drives takes the top spots in this benchmark mostly likely due to the faster sequential read and the compressible data used in the benchmark.

For the most part, the Vertex 4 performs about the same as the SandForce drives. The drive falls slightly behind in the Video Editing, Windows Defender, and Gaming, but excels in the Importing Picture to the Photo Gallery test. The differences are fairly small which may not going to be something that would be easily detected. The Application Loading test, however, clearly favors the SandForce drives. Application loading is primarily a read intensive task that focuses on random read but it is tests small amount of sequential read so the Everest 2’s weaker sequential read has a small impact on the performance.

The latest Indilinx Everest 2 controller delivers some exceptional performance. It offered the same random read as SandForce SF-2000 controller and much faster random write. The sequential write is also comparable to the SandForce based drives when dealing with compressible data but it is significantly faster at dealing with incompressible data. The Everest 2 would have earned the title of the best controller if it were not for its weak sequential read speed, especially at low queue depths. As we see with the Application Loading test, the drive suffered a little bit because of its sequential read performance.

All things considered, the latest Indilinx Everest 2 controller and Vertex 4 is competitive enough against other enthusiast drives. However, there is still work to be done. Besides the sequential read, the Vertex 4 really needs to improve upon its idle power consumption. As a desktop drive, the idle power consumption of the Vertex 4 is not going to pose much of an issue but for mobile systems, it would mean that your battery life will suffer. Hopefully, OCZ is able to further tune its firmware to improve upon these two areas in the near future.

What OCZ is able to achieve in such a short period of time since its acquisition is rather impressive. With the Vertex 4, the company essentially gives us a drive that is fast writing any type of data and delivers a competent read performance. The real strength with the Vertex 4 is in the high queue depth and incompressible workload, making it a great drive for the enterprise market.

A quick search on Newegg.com shows that the Vertex 4 is currently selling for $239.99, which is cheaper than the Vertex 3’s $299.99. Considering the pricing, performance, and the 5-year warranty, the Vertex 4 is certainly a great buy. With OCZ now having control over both the controller and the firmware, we have high hopes that the company will be able to deliver a competitive SSD with better reliability in the future and also be able to deliver much quicker bug-fixes.