AMD Had A Lot of Expectations to Live Up to For Enthusiasts, Did They Deliver?

“Note: I am covering this Keynote via Livestream remotely and unfortunately quality was not awesome, so please forgive the lackluster screenshots.”

AMD came to the show floor knowing what they were in for as they undoubtedly have watched the viral speculations and rumors abroad.  They knew what the expectations were and much like the previous years, the hype Train was full steam ahead previous to this launch. There were rumors of Navi, 16 Core Zen 2 AM4 chips (Performance/Mainstream) and  Intel crushing performance.

Did they live up to the hype? Much like it always give a little, get a little. Not to say this was a crushing fail by AMD and actually quite the opposite as AMD showed some very competent new products which will definitely heat up the market much like Ryzen did on its initial introduction. The difference this time being they are hitting from both the CPU and GPU side.

Now a lot of this is AMD’s word we must take which means quite a grain of salt needs to be introduced into the discussion as we have no 3rd party numbers yet to validate the claims.

The Demo started with a bunch of use case demonstrations along with testimonials by core partners and end users/companies. We’re gonna skip past that as you can revisit the Livestream if you want to see this, we’re gonna dig into the tech.

While I don’t dig into a lot of mobile tech with iGPUs and whatnot, when it comes to integrated GPUs the AMD Variant has been quite strong and now they have full Radeon driver support which means much better features/improvements along with gaming performance optimizations. 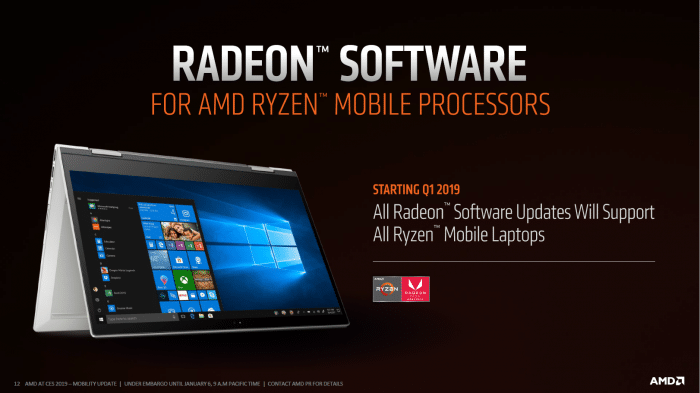 This is great news, then they had a mobile CPU comparison vs related intel parts. 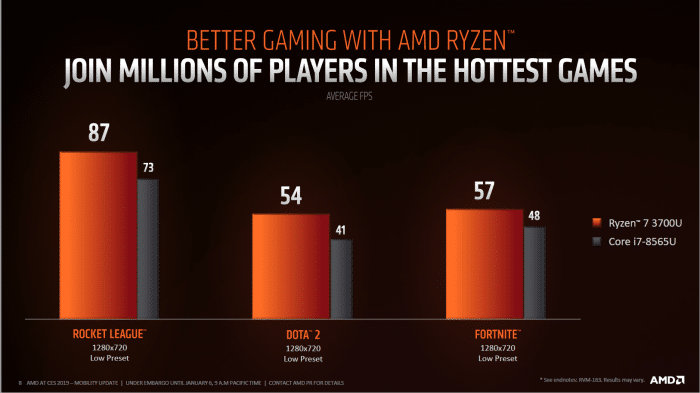 Once again this is a grain of salt thing and I would want to see the performance and platforms myself to see these results and compare BOM to know it is an apple to apple comparison. But overall a lot of this likely has to do with AMD’s value prospect where they can compare a much more powerful part to something that may be less powerful but more expensive from the Intel side.

This is where things got really exciting, and also pretty disappointing depending on who you ask. I was hoping to see unveil of NAVI but it was not meant to be. Instead, we got the 7nm refresh of VEGA. This on the surface could be seen as a bad thing if you subscribe to the same school of thought that got RTG to the bad position its been in for a while now. AMD made some major missteps and not entirely their fault but the hype train was hugely mismanaged during VEGA launch and therefore the name is forever marred in a way.

That being said, for those who could look past the previous lackluster RTG performance and look at the claimed numbers we saw today. (Please pass another pinch of salt here) you see something that looks VERY promising. This at the end of a promo video is how they announced the 2nd Gen VEGA powered Radeon VII. Conveniently the new 7nm card carries the VII or 7 naming which I’m sure is no coincidence.

Then much like we come to expect Dr. Lisa Su (CEO of AMD) parades the new Radeon VII around the stage for everyone to take it in. The takeaways we get right away is that the card is cooled by triple axial fans and takes dual 8 pin PCIe power connectors.

The next question is performance. (Hand over a grain of salt again) These are productivity numbers which had many people like myself scared at first as that made me question the focus on this card. Also, the increases being compared to previous VEGA 64 is not a good sign. Then we get the money shot. This is what everyone was waiting for and something we can “kind of” sink our teeth into. This shows to be right on the same performance level as an RTX 2080 and with ASync Compute even surpassing by a decent margin.

There are some definite takeaways and points I want to make here as I feel they are very important to note when digesting this information. First up is the fact that AMD chose the safer path of pure rasterization and for this GPU release may be a great choice as RTX featured games are still slow to release and nobody except maybe Nvidia and the developers know when they will come to light.

Now to the bad part. Let’s say that RTX/DXR features do take off and DLSS and Ray Tracing take hold. These GPUS likely will not even be close to powerful enough to power real-time ray traced titles, which in turn means you will be stuck with standard rasterized scenes. Nvidia definitely took the bigger risk here with the biggest chance of reward if the strategy pays dividends as they have the Tensor cores and the RT cores to pull off the new DLSS and RTX/DXR features.

Now we see this is touted as being available in less than a month. We shall see proof of performance very soon as I’m sure Reviewers will be spitting numbers out very quickly. Now, as far as price analysis this places the Radeon VII right in the realm of the RTX 2080 which means if it truly is competitive at the numbers mentioned before Nvidia is really gonna have to ramp up the adoption of the aforementioned features to ensure they can continue to leave AMD in the dust.

This, is everything rings true could be a paradigm shift for the graphics card market as such we have not seen in a very long time. Anyone who is not excited about the possibilities of this is simply not paying attention.

What was shown today has the potential to create a race in the GPU market much like Ryzen did in the CPU market. Speaking of CPUs lets take a look at what they showed in that area.

Also, one final note, be sure to stay tuned for reviews of these products as soon as I can get them in hand.

Well, rumors have been going around expecting the unveiling of a 16 core Ryzen 3rd gen (Zen 2) part and well that’s not really what we got to see. But that’s ok and I will explain shortly let’s go in the order the keynote went. (Please note: have a steady supply of salt grains handy as we cannot validate these numbers since the parts do not exist for us to test yet)

Once again the CPU section started out with talk of how the new Ryzen chips and Zen architecture has changed the game and then many testimonials from key clients which we will jump past.

First up is EPYC, and with this AMD decided a good demo would be to compare a single EPYC 7nm chip vs two Intel Xeon 8180 chips. As you can see the Zen 2 7nm parts are strong, to say the least. Unfortunately, the exact core count of the 7nm part tested was not supplied along with undisclosed clock speeds. but to see that a single EPYC could potentially unseat a dual top end Xeon platform is quite unsettling and has true potential to further disrupt the enterprise and data center space.

While server stuff excites me, I know many of you also were looking at the desktop offerings. And AMD was happy to oblige although I had almost assumed they were going to show nothing in relation to Zen 2 for the desktop.

AMD Decided to go to their staple for proof of performance. Cinebench R15 which is a test I myself use among many tests for proof of performance. they ran the multi CPU test which was compared in a live run vs a 9900K platform. and the results were in lockstep with each other. The AMD part pulled a slightly higher score of 2057 vs the 9900K 2043 (or 2040) the screenshot was hard to tell. This when considering the variance between runs I have observed, this is within the margin for error. One thing that was impressive was that it showed a live power read for each platform and the test ended with the demo Zen 2 part pulling 133.4Watts while the 9900K was at 179.9Watts.

This now, of course, begs the question of configuration and once again makes things very exciting. This means that AMD with Zen 2 is capable of similar clock speeds and IPC as Intel which would be a major jump in IPC once again. This also means that there is some possible headroom to even push further.

Now, of course, it would not be a proper CPU showing/unveil if they did not show the chip.

Here we can see the “chiplet” 7nm Die with the larger I/O Die in place. This is interesting and one thing to note is that the 16 Core rumor may not be completely false. if you look at the die closely, you can fit another 7nm chiplet there and have a 16C part but that may be held back waiting until it is needed to be released.

Note: I have spoken to a few people who were at the keynote and from what they saw there was not special cooling in place on the demo platform and instead was a standard ambient cooling solution which means no “water chiller antics” like we have seen previously from other CPU demos.

We do not have any clock speed confirmation as of this time so we do NOT know if there was an overclock on the CPU or if this is a planned base/boost clock, but if the CPU can perform at this level on equal grounds on ambient cooling, the CPU race just got even more exciting and we could see even more pushed of CPU price drops and releases to one-up each other.

I hope you are all excited as I feel the market is evolving and changing and this going to be one hell of a ride. I for one can not wait to see what these new parts both GPU and CPU can do and the change they will force on the market.

It is my conclusion that AMD came to CES demanding attention and I think they got it. All of the speculations aside I hope the other competitors take notice. If this performance rings true and comes out quickly this could mean we have a real 2nd option for both GPU and CPU not just a decent one but a potentially great one.

I hope you guys like the CES coverage so far and let us know your thoughts on this keynote and the announcements from AMD.