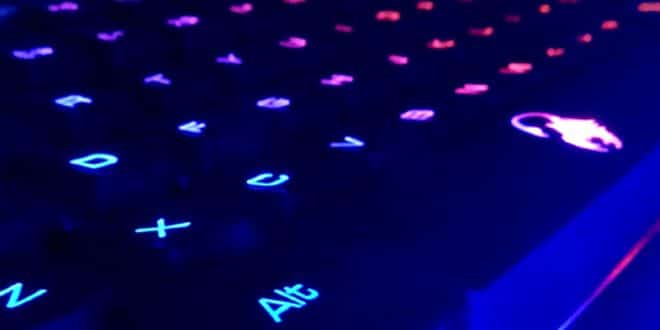 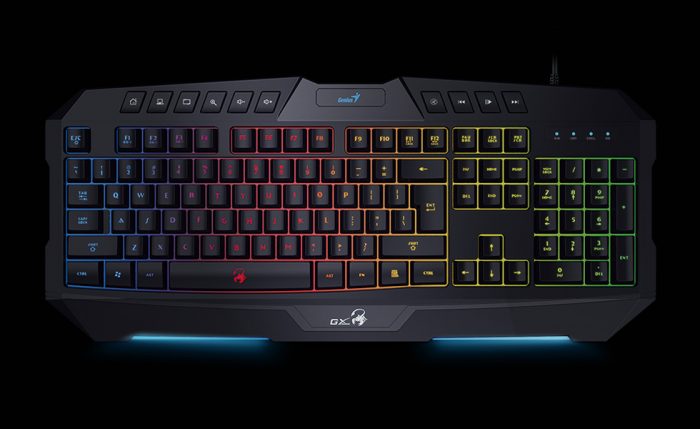 From the image above, we can already see a few of the visual features that Genius has included on the Scorpion K20. There are a few other features however that aren’t so apparent to the eye.

Genius has packed the Scorpion K20 into a nice looking cardboard box that shows off the keyboard that waits inside. The back of the packaging shows off the features found on the K20, along with giving a bit more information about the keyboard. 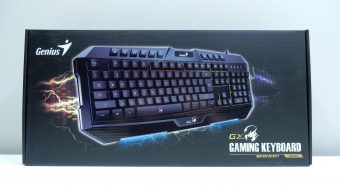 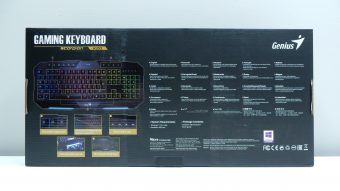 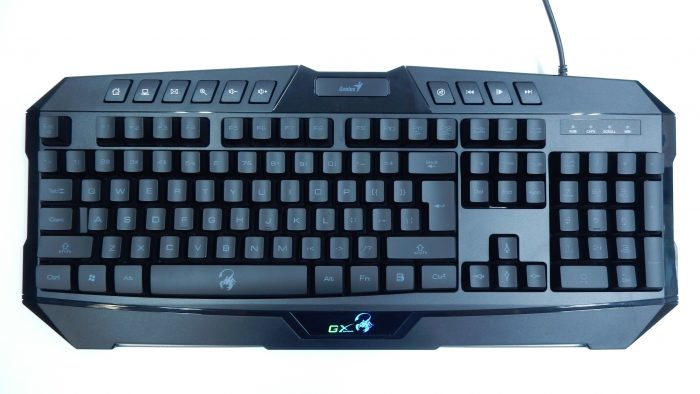 Overall, there is nothing too unique about the looks of the Genius Scorpion K20. The body of the K20 is plastic, and features a mostly matte-textured finish, with a few glossy highlights here and there. One thing we do want to point out is the choice by Genius to rearrange the “\ |” key and “Enter” key. We have seen this arrangement on other keyboards, and we are definitely not a fan. 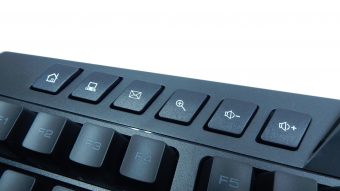 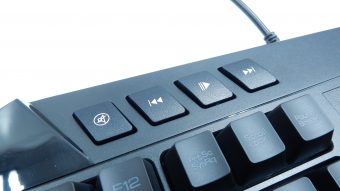 Centered between the multimedia keys is a backlit Genius logo.

The keys themselves feature standard concave tops, except for the bottom row of keys, which feature a more rounded top. 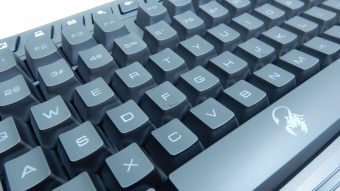 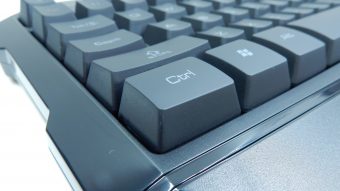 The four directional keys feature stylized arrow markings, which is a bit different from other keyboard designs. 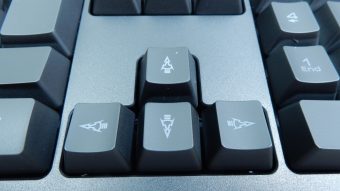 At the center of the wrist rest is a holographic GX Gaming and Scorpion logo. 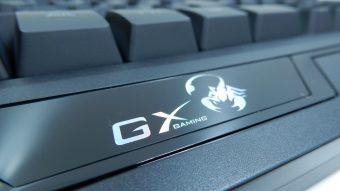 Along the bottom of the wrist rest are the two semi-transparent lighting sections that glow along with the rest of the keyboard. 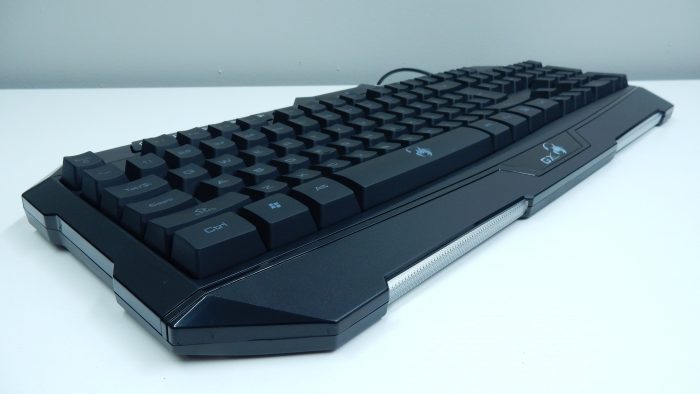 Flipping the K20 over presents us with a fairly basic keyboard base. Aside from the two rubber feet at the boom, and dual-size stands up top, there isn’t much to mention here. We did like the inclusion of two sizes of stands to offer a bit of flexibility with regards to keyboard height/angle. 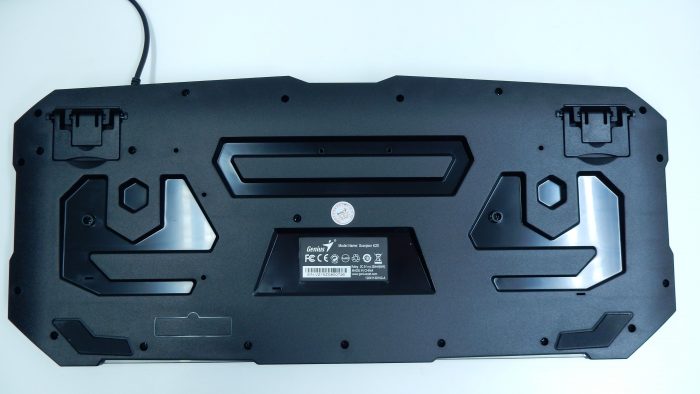 Overall, the use of the Scorpion K20 was what we would expect from a $30 keyboard. There are no mechanical keys to be found on the K20, as it opts for membrane-based action. This isn’t necessarily a bad think, as the feel of mechanical keys doesn’t suit all users, plus there is an additional premium to pay for mechanical keys. Key presses were comfortable, but a bit sluggish feeling. This is probably because we are used to using a keyboard with Cherry MX Red keys. The noise from the Scorpion K20 was very low, something we do miss since our change to a mechanical daily keyboard.

Typing out this review on the K20 was quite a pleasure, save for one annoyance. Remember that alternate configuration of the “\ |” and “Enter” keys we mentioned earlier? Well, it has been giving us issues every time we needed to use the “Enter” key. While this would just take a matter of time to adjust to, it is quite an annoyance coming from the standard layout.

During gaming use the Scorpion K20 worked just fine. We didn’t notice any performance issues due to the membrane switches, nor did we expect to. During our Overwatch play sessions, the K20 felt quite comfortable, and the slightly thicker space bar proved to be very capable as both a thumb rest and jump button.

Since Genius touts the Scorpion K20 as having “Gaming-feel backlighting”, we have to mention that, yes, it does have backlighting. However, the seven colors offered by the K20 cannot be adjusted in any way other than brightness. Even at their highest setting, the glow of the keys is quite dull, and very overshadowed by the two blue light bars below the wrist rest. Unfortunately, these light bars can’t be adjusted independently of the rest of the keyboard, and thus are quite bright. If there were a way do separately dim or disable these light bars, the glow of the keys would probably stand out a bit more. 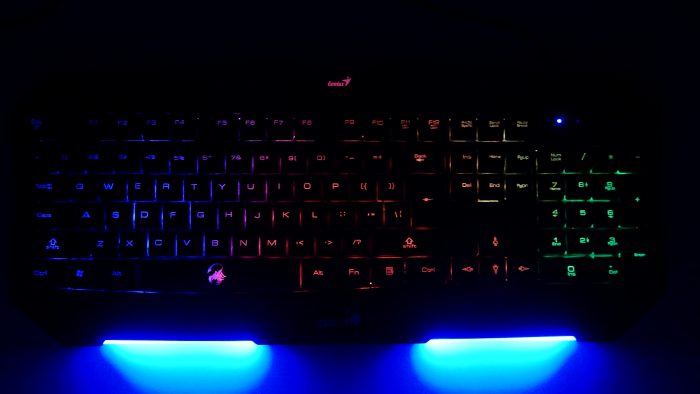 When used in brighter conditions, the only glow that is easily visible is again from the two blue light bars. You really have to look closely at the keys to see that they are also illuminated. 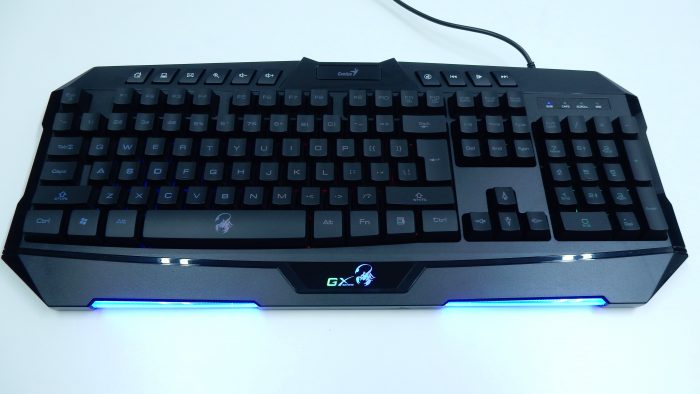 Designed to be a gaming keyboard, the Genius Scorpion K20 proved that it could perform its duties quite well. With comfortable, smooth key caps, the K20 took no time to get used to. And while we did take a moment to get used to the feel of the membrane switch mechanics, their performance was just fine.

Our only complaints about the Scorpion K20 are the limited lighting options (non-programmable lighting, only dimming and one breathing mode), and the non-standard “Enter” key. With just about every new gaming keyboard featuring per-key RGB lighting, the K20’s static coloring leaves us wanting more in the way of customization. Although we know it wouldn’t take too long to get used to the non-standard “Enter” key size, it is a bit of an annoyance having to readjust your muscle memory from years of practice.

Being a budget-level, $30 keyboard, there isn’t too much we can ask for from the Scorpion K20; it functions just fine for it’s budget price, and custom RGB lighting adds a premium price to those keyboards that feature it. We think the Genius Scorpion K20 gaming keyboard is well suited as an entry-level gaming keyboard for gamers that don’t require every bell and whistle that premium-priced products include.

We think the Genius Scorpion K20 gaming keyboard is well suited as an entry-level gaming keyboard for gamers that don't require every bell and whistle that premium-priced products include.