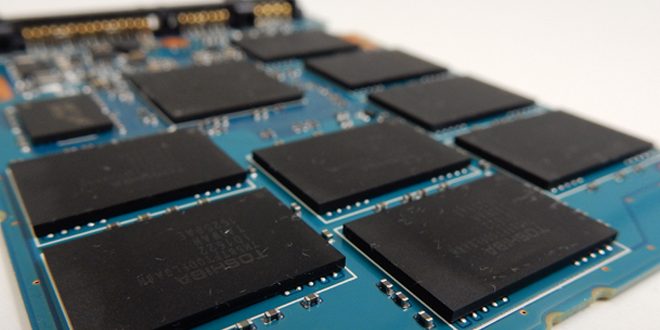 Designed with mainstream desktop and laptop devices in mind, the OCZ VX500 SSD utilizes Toshiba’s MLC NAND to usher in a replacement for the Vector 180. The VX500 falls in between the budget-oriented Trion 150 drives, and the blazing-fast RD400 NVMe offering. Offering 128GB, 256GB, 512GB and 1TB sizes, the VX500 line can easily slip into use in a multitude of tasks. Utilize the smaller 128GB model for an OS drive, or pop in a 1TB drive to be used as a fast storage drive for those ever-increasing game installs. OCZ emphasizes the write endurance of MLC NAND, and backs it up with a 592 TBW endurance rating over five years for the 1TB drive we are taking a look at in this review. We all know the benefits of moving from a traditional spinning disk drive to an SSD, so let’s get right to the review! 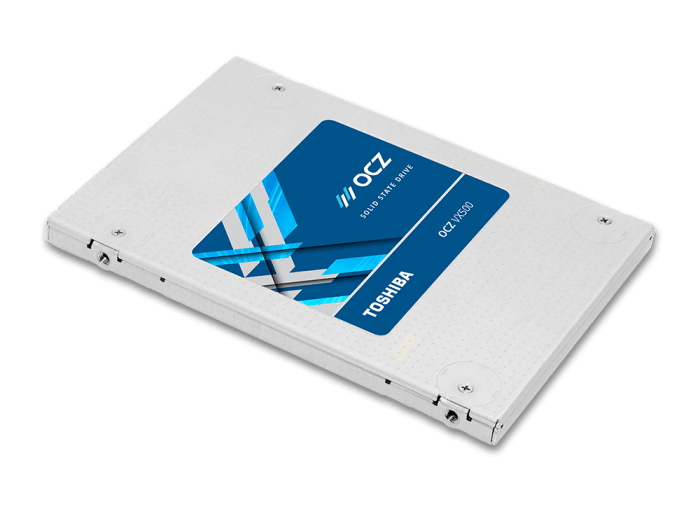 There is a current trend in the budget to mid-range SSD realm, and that is one of utilizing TLC NAND to keep prices low, while still providing decent performance. The VX500 eschews that line of thinking and provides proven Toshiba 15nm MLC NAND for both improved performance and durability.

The specifications of the VX500 line are nearly identical across most categories, however a few outliers do exist. Sequential reads of up to 550 MB/s are listed for all sizes, and Sequential writes range from 485 MB/s on the 128GB model up to 515 MB/s on the 1TB unit. IOPS also increase along with capacity, as the Random reads and writes for the 128GB model are 62k and 49k, respectively. The 1TB model offers up 92k Random read IOPS, and 65k Random write IOPS. Endurance is the second major area of differentiation, as is expected with any line of SSDs. While the 128GB model offers a TBW of 74TB, the 1TB model has eight times the amount, at 592TB. 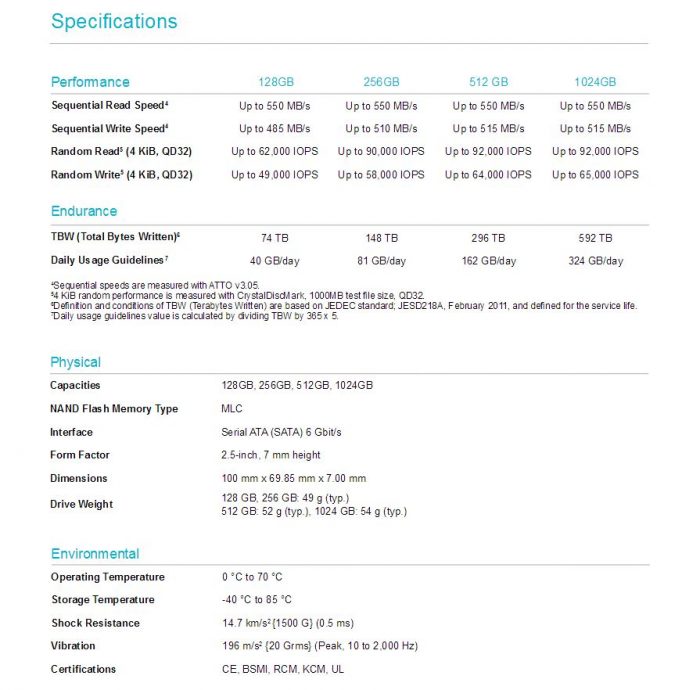 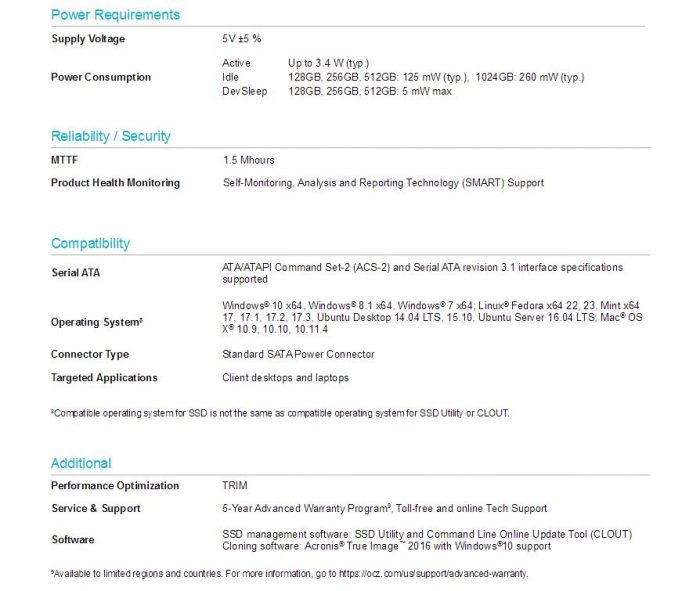 The VX500 comes packaged in the traditional SSD packaging form factor that many vendors use. The the front of the small cardboard box features a quick look at the enclosed SSD, and denotes the size of the drive inside, while he back of the box gives details regarding the contents of the box itself. Inside the packaging we find the SSD itself, safely sealed in a transparent clam-shell enclosure. Of note is that there is no 2.5mm spacing adapter for when the drive is used in a 9.5mm setting. Also included are a manual, support and RMA documentattion, and an Acronis True Image HD installation information, along with an activation key for a free copy of Acronis True Image HD software. We love seeing migration software included with new drives, as it makes migrations so much easier. 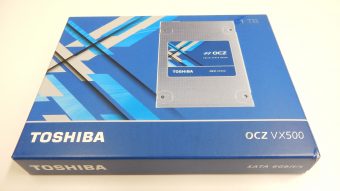 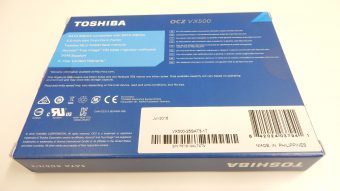 The VX500 is probably the most basic looking SSD we have ever seen. The bare metal case has been spared a coat of paint, and its only decorations are an OCZ VX500 sticker on the front, and the standard specifications-type sticker on the back. The material of the case is a bit interesting, as it features a slightly textured surface. 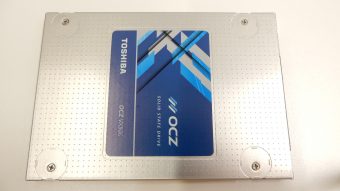 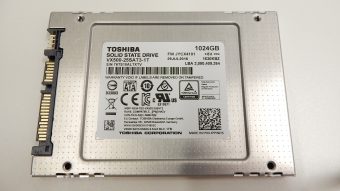 The corners of the drive are actually quite sharp in some cases, and the looks of this drive just shout “I came from an industrial background!”. Gaining access to the interior of the VX500 is quite simple, with four small Phillips head screws keeping the lid on. 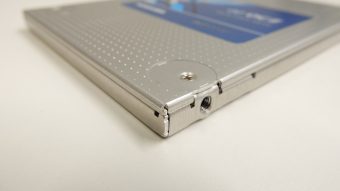 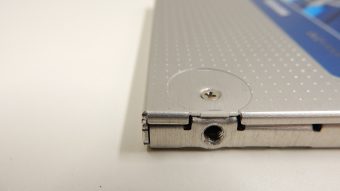 Once inside the VX500 we are presented with a full-sized 2.5″ PCB dotted with various MLC NAND packages, Toshiba’s TC358790 controller, and in the 1TB’s case, 256MB of Micron DRAM cache. The smaller VX500 drives do not offer any DRAM cache. 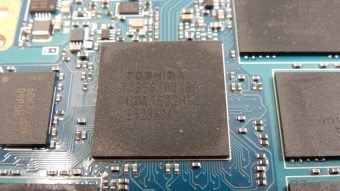 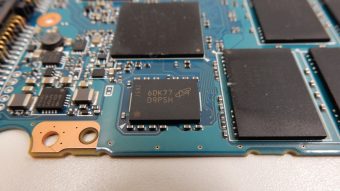 Each chip, save for the DRAM, comes equipped with a thermal pad that interfaces between the chip itself and the VX500’s case. This thermal pad aides in transferring heat to the case for some passive cooling. We really like this feature and are always happy to see manufacturers taking advantage of this. 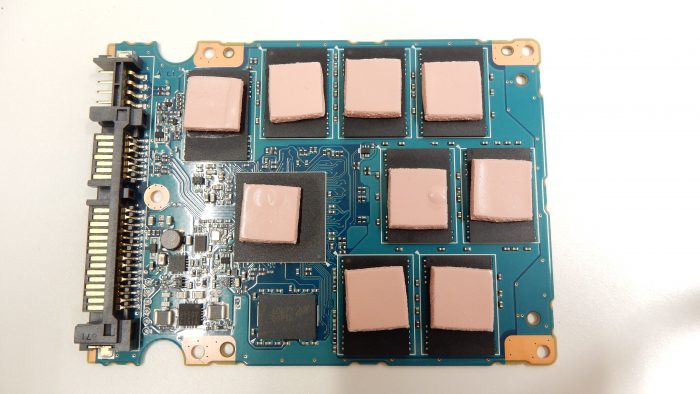 Missing from the internals however, is any sort of hardware-based solution for data loss prevention in the case of power loss. There are no on-board capacitors tasked with providing enough power to flush the cache to NAND. This shouldn’t be considered a deal-breaker by any means, as the VX500 flushes often enough that most data should be safe. 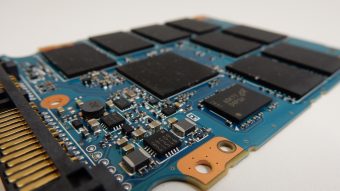 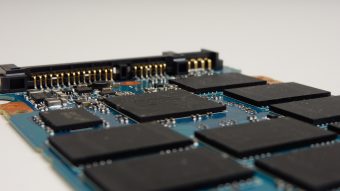 As with most modern storage devices, installation of the OCZ VX500 was a piece of cake. We utilized the included copy of Acronis True Image HD to populate the drive with our testing image, a process that went off without a hitch, allowing for a quick turnaround for starting benchmarks. 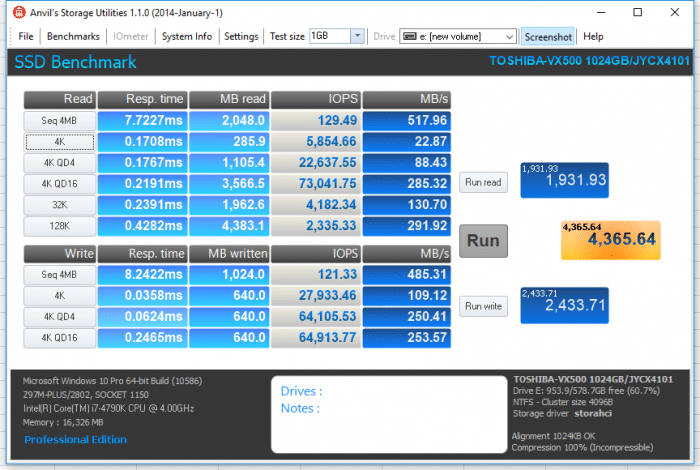 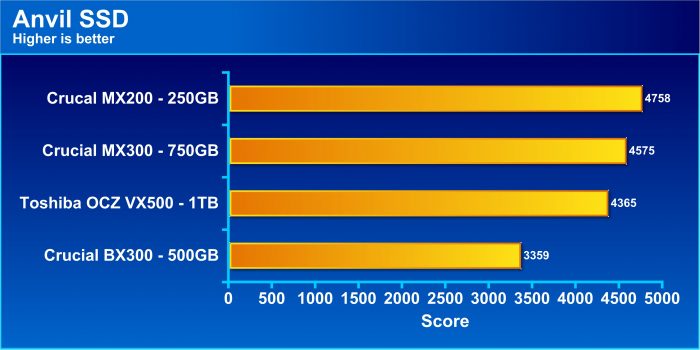 We really like Anvil’s SSD benchmark, as it gives us not only a final score for a drive, but also breaks that score down into various sub-scores. Where the VX500 fell behind the MX series from Crucial was in the Random Writes at higher queue depths, dropping the overall drive score below the MX drives. And while the VX500 didn’t quite live up to the exact claimed transfer speeds and IOPS in Anvil SSD, it was not so far off to warrant any concerns just yet. 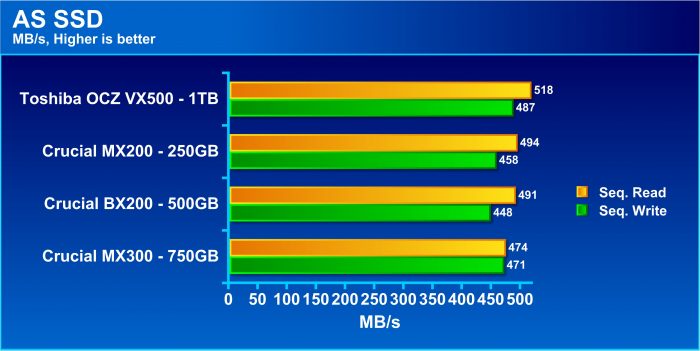 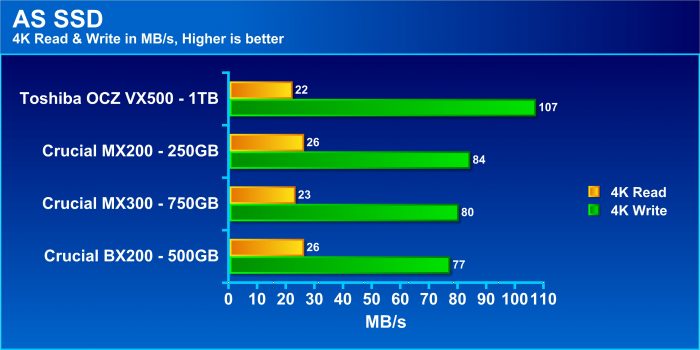 4K Reads on the VX500 were just slightly slower than the other drives in our testing, but the 4K Write speeds blew the rest of the pack out of the water. The VX500 was 22% faster than the Crucial MX200 in 4K Writes. 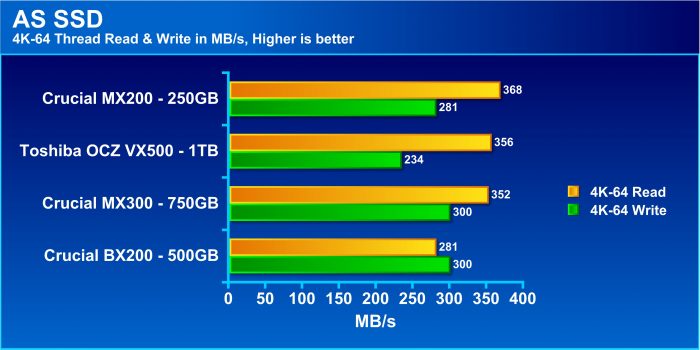 Here we see things even out a bit more when looking at 4K 64 thread Reads and Writes. And while the VX500 is competitive in the Read side of the equation, it comes in 17% slower than the next closest drive. This isn’t necessarily a surprise, as we encountered similar findings in Anvil SSD.

An all-time favorite, and often-used benchmark, Crystal Disk Mark gives us a quick and easy view of just how the drives being tested perform. 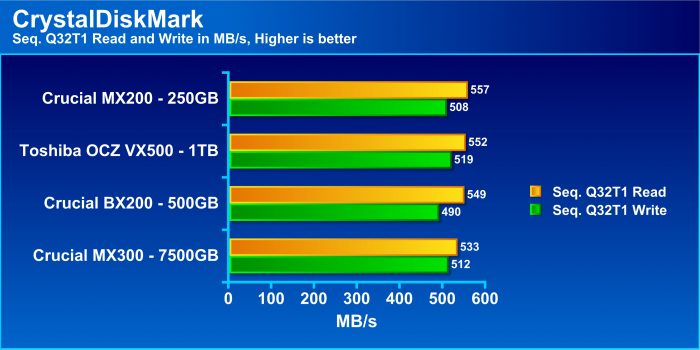 The Sequential Q31T1 test puts all four drives at nearly the same performance level across the board. The VX500 put forth 552 MB/s Read speeds which actually surpasses the 550 MB/s claimed by OCZ. Writes were also impressive, again passing the claimed 515 MB/s. 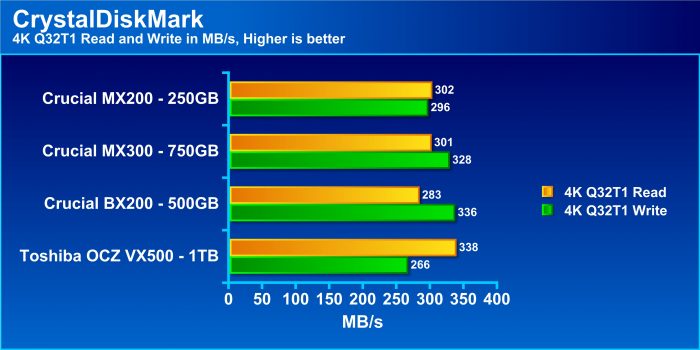 Bumping up to 4K, Q32T1 Read and Writes, the VX500 clearly takes the lead in the Read test, but falls behind the pack once again when it comes to Writes. 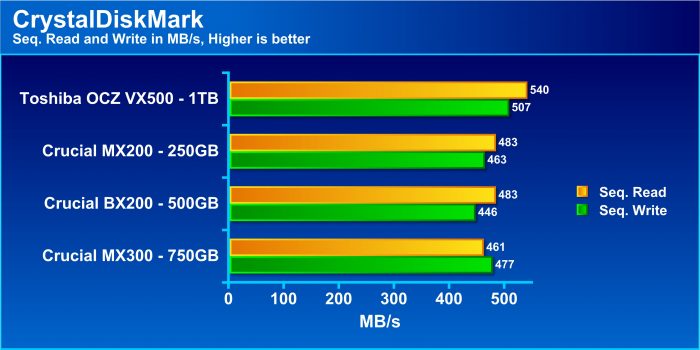 Standard Sequential Reads and Writes bumps the VX500 back into the lead across the board. 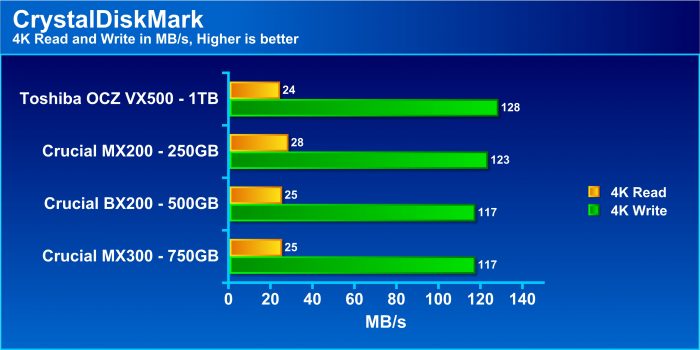 4K Read and Write places the VX500 out front in this benchmark, something we haven’t seen from this drive. And while the margin isn’t large, it is still enough to warrant mentioning. Reads are slightly less impressive, with the VX500 at the back of the pack.

Here we see the OCZ VX500 1TB drive pull to the front of the pack in both the Storage 2.0 score and the Storage 2.0 bandwidth metric. At 300 MB/s, the VX500’s bandwidth score was 11% higher than the next drive tested. Outside of that section, all drives performed nearly identically. 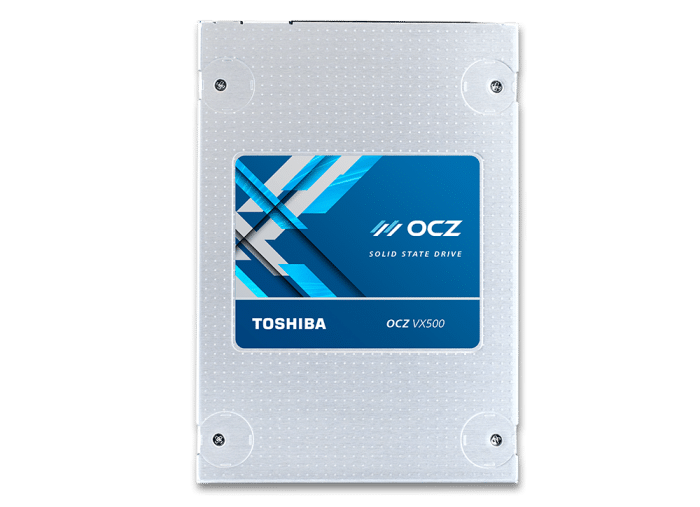 Encountering a new MLC-based NAND SATA SSD these days is becoming a rare thing, as most manufacturers have been focusing on high-capacity, low-cost TLC NAND offerings. While the performance and enthusiast sector continues to amaze us with new PCIe NVMe drives, the mainstream market has been focused on getting the most bang for your buck. The OCZ VX500 1TB drive has an MSRP of $337, which equates to $0.32/GB. So while the sweet spot for this drive in the size-to-cost ratio is the 512GB model at $0.29, the 1TB drive offers up great value as well. While it won’t be able to match the value that the Crucial MX300 presents, it is also working with MLC-based NAND, as opposed to the MX300’s TLC NAND.

Performance-wise, the OCZ VX500 is still a drive aimed at the mainstream sector, so blistering speeds are not to be expected. We are still dealing with the SATA III interface running at 6Gbps, and pushing speeds past their current levels just isn’t going to happen. The VX500 was our across-the-board winner in nearly every test, save for 4K Write operations, however, we wouldn’t let that keep us from being impressed by this drive. It’s sequential performance was great, and the presence of a 256MB DRAM cache keeps things snappy.

Placing a five-year warranty on the VX500 shows that OCZ is putting their money where their mouth is. Their hassle-free Advanced Warranty Program boasts a quick turnaround with a prepaid return shipping label and next business day turnaround keep you from long outage periods. We hate being down due to component failures, and hate it even more when the process to get something tested and swapped out turns into a big hassle due to all of the hoops we are often made to jump through.

Our time with the OCZ VX500 1TB SSD showed us that vendors still care about providing users with a choice between performance and capacity at the SATA SSD level. Luckily for us, that means that larger SATA SSDs are becoming a reality, and that includes MLC-based drives spread throughout the sea of TLC offerings. While it may not be much of a looker, the OCZ VX500 1TB SSD has it where it counts: capacity, performance, endurance and support. OCZ has something good on their hands with this drive, and that earns the VX500 1TB the Bjorn3D Seal of Approval.

While it may not be much of a looker, the OCZ VX500 1TB SSD has it where it counts: capacity, performance, endurance and support.