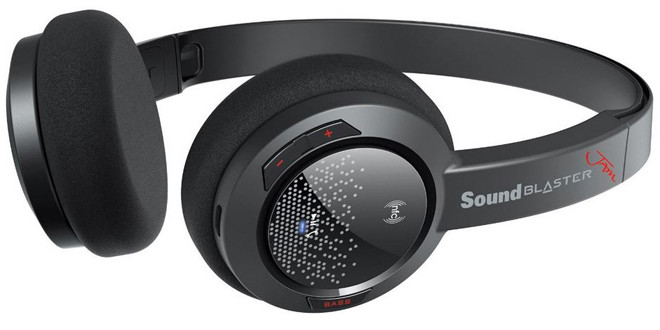 Upon opening the box and getting a feel for the construction and its designed it was very reminiscent of the old school headsets that use to come with the old Sony walkmans. With its matte gray over the ear design with cushy foam rear muffs that provide ample padding which for those of us that grew up in the early 90’s it is sure to bring back some memories, If you’re too young to know what we are talking about then watch “Guardians of the Galaxy”.

Granted the Jam incorporates nearly 2 decades of technology into this retro design with things that back then would have seemed like stuff straight out of Star trek. The Sound Blaster Jam features a Lithium Ion battery, Bluetooth, NFC, onboard controls, built in microphone and bass enhancement. Before using the Sound Blaster Jam we would recommend that you plug it in using the lovely red Micro-USB cable that it comes with and once it is done charging you turn the headset on by pressing and holding the play button on the right ear muff and you will see a blinking green light.

Pairing and built in controls

To pair the Sound Blaster Jam with your device you want to make sure your Bluetooth is turned on your device and as mentioned before you want to turn the headset on and once you have a blinking green light you will want to press and hold in the same place and the blinking light will change to blue. Once it has paired with your device it will show as a intermittently blinking blue light. Finally you are ready to Jam out after you press the play button and listen to some tunes and or movies! 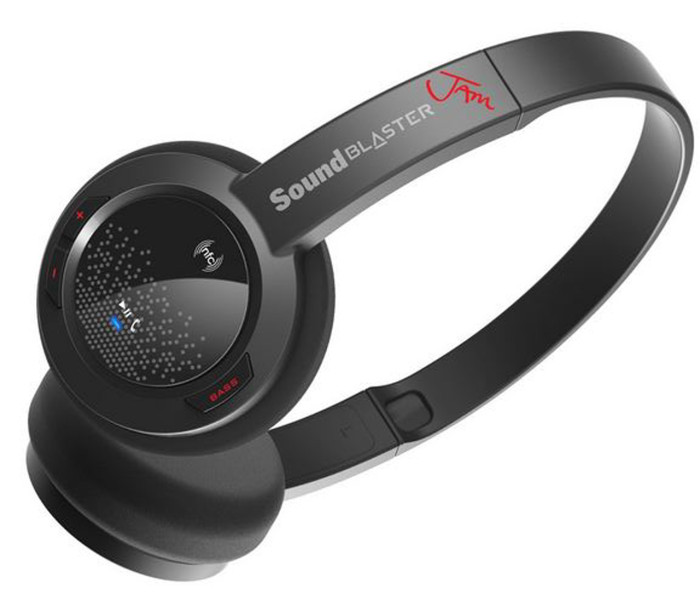 The Sound Blaster Jam controls are all located on the right ear muff. All of the controls are easy to find just by feel once you know that the play pause button is the center cap.   The play pause is flush mounted pressure switch and is the same to turn on headset and to enable Bluetooth pairing. The volume switch is located near the bottom back side near where it rests near the users earlobe and is a simple raised rocker switch making it easy to find based on feel. Lastly the bass enhancement button is located in the front near the users face.  Overall we found the Jams user controls to be extremely user friendly and easy to learn where the controls are.

The Sound Blaster Jam utilizes a Micro-USB port to charge its 200mAh lithium Ion Battery that is capable of powering the Jam for up to 12 hours of use. In addition to this the Micro-USB port can be used as a audio connection allowing the user to continue listening while the Jam is charging. However on a side note plugging in the Sound Blaster Jam via USB into your computer will not allow the user to use it as a headset since the microphone cannot be utilized.

The Sound Blaster Jam exhibits good audio quality in the mids and highs and pretty good lows in normal mode and with bass enhancement enabled it boosts the lows to give a little more bass. Throughout most of the volume range you get crystal clear audio until you reach the upper end of the volume range. Overall we felt that the Jam headset struck a nice balance with its audio performance with its small lightweight package while achieving stellar battery life,

[section_title title=Sound Blaster Jam]   The names Creative and Sound Blaster have become synonymous over the years for their audio products and just hearing the name Sound Blaster garners about the same respect as the name Porsche! Which is where we get to the Sound Blaster Jam Bluetooth Headphones that will be featured in this review. Creative has a rich history dating back to 1981 with the vision and inspiration to revolutionize the role multimedia interfaces with our PC's and devices to enrich the users everyday lives. They originally took the industry by storm with their line of innovative sound…
Sound Blaster Jam
Sound Blaster Jam
Kevin Arndt

Overall the Sound Blaster Jam is a very good entry level headset for any age group due to its ease of use and durable easy to clean construction. One thing holding it back was the look and feel, where as the competition seeks to make a product look more fancy. the Jam focus's on practicality, features and durability.