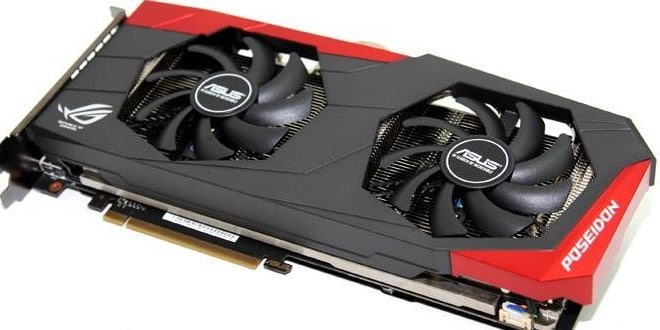 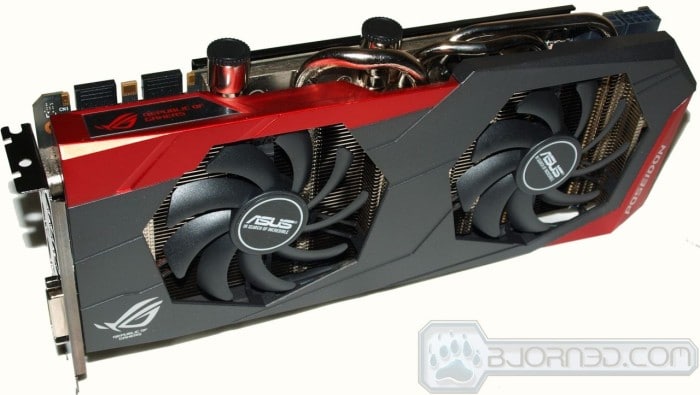 The Air cooling option on the Asus Poseidon Platinum GTX 980 Ti gives you the ability to yank it out of the box and get some GTX 980 Ti goodness rolling before you take the time, effort and expense to water cool the GPU. We’ve seen from the factory water-cooled GPU’s but for us it would be an extra effort to rip the less than impressive factory water cooling on most GPU’s to replace it with a custom overkill cooling system. Face it if you are packing a Asus Poseidon Platinum GTX 980 Ti overkill is on your menu and in that spirit we plopped two 360mm MCR320-QP Swiftech stackable Radiators with 6 Yate Loon fans driving air across the cooling vanes. The G1/4 inch ports on the Asus Poseidon Platinum GTX 980 Ti lead to a slightly narrow water inlet so there’s no need to push 1/2 inch hose and barbs at it because the water inlets will reduce the flow increasing the speed of the water and the pressure on pump side of the water cooling rig. We found a Swiftech MCP350 pump pushing 440L/Hr with 5/8 inch barbs to be plenty of pump to cover the cooling needs. The advantage of the Swiftech MCP350 is extremely long life (50,000 hours) and 20 – 26dBA quiet operation were a big factor in the selection of the highly reliable pump. The entire setup uses a Swiftech Micro Reservoir to conserve space and around the lab the massive water cooling rig is called Pumpenstein.

The Asus Poseidon Platinum GTX 980 Ti is a large GPU running 29CM in length with a classic black and Red ROG cowling with the model Name “Poseidon” printed on the end of the monster GPU. 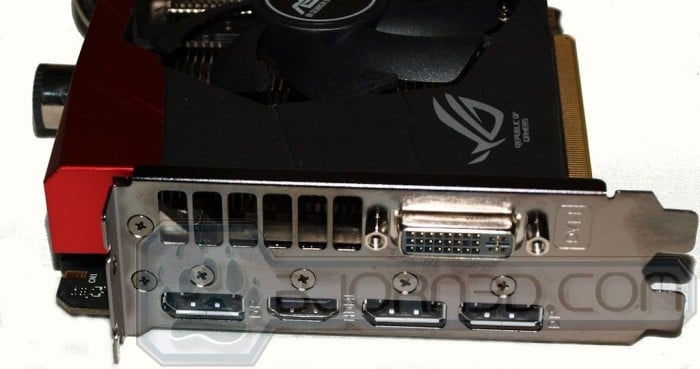 The Asus Poseidon Platinum GTX 980 Ti comes with 5 video output ports: 3 Display Port, a HDMI and a DVI connector. Display port is the obvious choice for the Asus Poseidon Platinum GTX 980 Ti but the sheer amount of legacy monitors makes leaving off the DVI and HDMI a hard choice so this combination of connectors is pretty standard on enthusiast cards.

Shown from slightly above you can see the water inlet port caps and the air cooling heat pipes which will provide a unique and extremely effective cooling solution allowing for a cooler running card and hopefully some overclocking headroom as well. You will find the Air cooling solution on the Asus Poseidon Platinum GTX 980 Ti is perfectly adequate but if you don’t plan on water cooling there are other Asus models (like the Strix) you may want to consider.

Popping the water inlet caps you get a look at the G1/4 inch water inlet ports and you can see the water channels which appear to be approximately 6mm in diameter. The water channels aren’t massive but since the Air cooling and Water cooling are both working at the same time a massive water cooling channel isn’t needed and would just put extra pressure on the pump side of the cooling system. In general the physical rules of water flow are the reduction of the water channel from the source will result in increased water speed. Say you take a 1/2 inch flow and it runs at 20 foot/s, channel that to a 1/4 inch channel the flow speed increases to 40 Foot/s and creates back pressure. We know the enthusiast tendency all too well as we are infected with that bug ourselves and the instinct is to pop on 1/2 inch barbs, a 1200 L/Hr adjustable pump with a 500ml reservoir but the fact is you just don’t need it and a quieter lower flow pump is indicated in this instance.

Going top down you see the two 8 pin PCI-E power connectors used to power this behemoth GPU which is rated at a TDP of 250W which is filtered through a 10 phase power regulation system and Asus sprang for 10K long life capacitors. With the water cooling, 10 phase power and long life high quality caps you can pretty much guess this GPU from top to bottom is designed for Overclocking. Asus takes the quality of its product seriously and included fully molded  alloy chokes to reduce or eliminate coil whine and offer increased performance. When it comes to Nerd Candy Asus rules supreme and seems to always give us what we didn’t even realize we craved, you just look at the product, skim the specifications and you know it’s love at first Geek Gawk.

Moving to the back of the card you find a premium metal backplate covering the custom PCB which helps prevent board warp and helps cool the card. Several openings allow additional cooling and room for vital spots like the core. 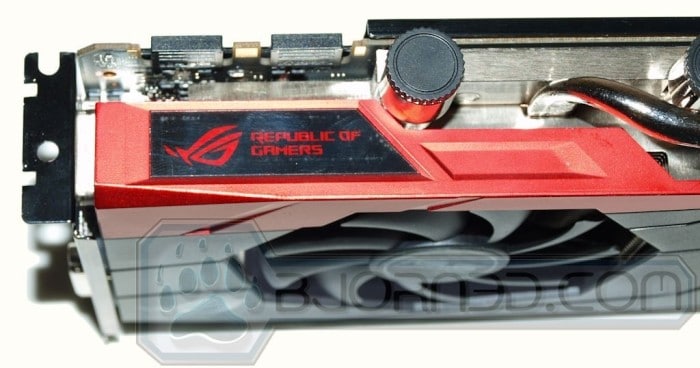 Topped with a ROG logo when the card is in operation you will see an ROG red pulsating light highlighting the ROG Logo. Across from the logo you find the standard SLI Connectors allowing for multiple GPU use. 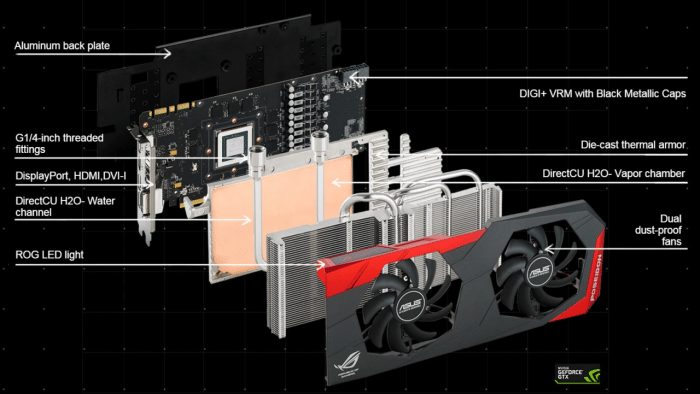 The DirectCU H20 cooling system is a layered approach starting with the two Dual dust proof fans providing airflow over the copper heat pipes and cooling fins helping to transfer the thermal load. The Air system covers the DIrectCU H20 vapor chamber which has the water cooling channels running through it. The copper cooling block makes direct contact with the GPU core and provides a thermal armor that covers the lions share of the custom PCB. Than behind the GPU PCB is the Aluminum back plate we talked about earlier.

We’ve covered most of the specifications for the card already but here’s the compulsory comparison chart showing the GTX 980 top end offerings. If you take a closer look at the table you’ll see that the Asus Poseidon Platinum GTX 980 Ti is much more closely related to the Titan X than the GTX 980 and when compared to the $1150 Dollar price tag of the average TItan X the Asus Poseidon Platinum GTX 980 Ti is a bargain in the price / performance venue and delivers a great price performance punch if your tastes run to huge performance and some measure of future proofing.