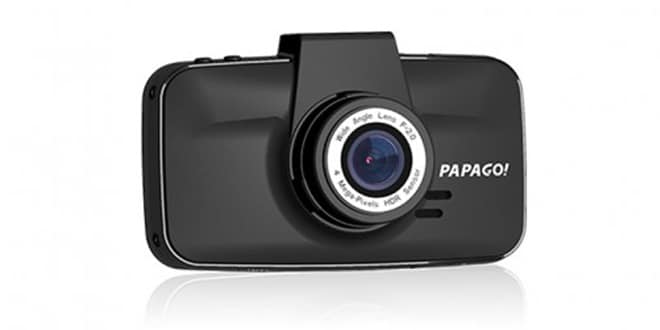 In the past few years, a new trend has emerged that not only aims to help drivers document their travels, but provides video and audio evidence in the case of an accident. The use of dashcams is not a new concept by any means; we have all seen footage from law enforcement vehicles and those crazy Russian dashcam videos that are all the rage right now. PAPAGO!, a Taiwanese company established in 2001, is a leader in providing easy to use cameras that provide high quality imagery. While PAPAGO! has been focused on the European and Asian markets, they have recently expanded into the American market, and today they bring us the GoSafe 520 dashcam. This model touts what PAPAGO! calls Ultra WHD with a maximum resolution of 2560×1080, as well as more standard resolutions of 1080p and 720p. Hop on in and buckle up, as we take the PAPAGO! GoSafe 520 dashcam for a little ride.

The idea of a small, HD camera is nothing new, as the GoPro has been around in some fashion since 2004. What is newer is the size and features now found on current cameras. The GoSafe 520 features HD resolutions along with an on-camera screen to help adjust the view and allow for playback right on the camera. The following are a few of the features that we found to be impressive with the GoSafe 520.

The GoSafe 520 comes in a compact box detailing the features that can be found on the camera that lurks inside. Also listed are the items included inside the box. 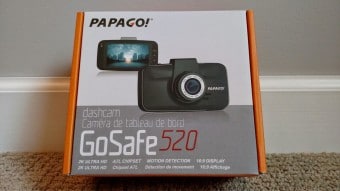 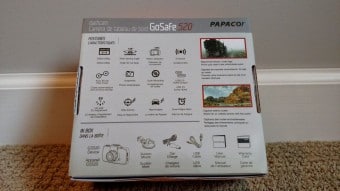 Out front, the GoSafe 520 features a 146-degree, ultra-wide angle, fixed lens, the widest angle available, according to PAPAGO!. Next to the lens is the speaker that is used for video playback, as well as the integrated audio alerts from the stop and go feature, as well as the driver fatigue timer. A small PAPAGO! logo rounds out the front of the GoSafe 520. 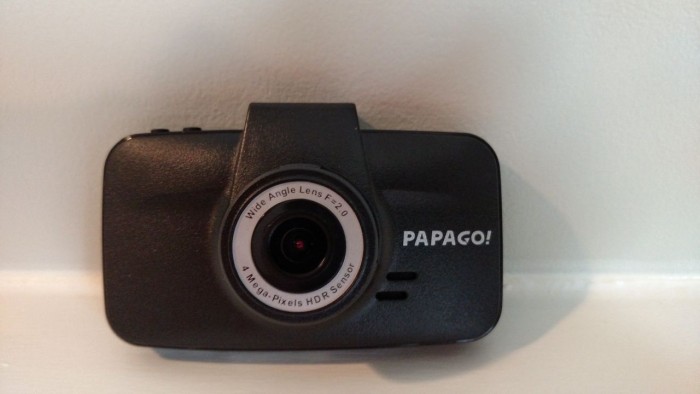 On the rear of the camera we find the 3″, 960×240 screen, along with four buttons that are used to make adjustments to the camera. The screen on the 520 is very clear when in the menus, as well as during video playback on the camera itself. The screen can remain on while in normal use, or can be set to turn off after a set period of time. To the right of the screen are four buttons: Mode, Up, Down and OK. These buttons correspond to on-screen menu items, and have a nice click feel to them when depressed. To the upper-left of the screen are two LED indicators that provide visual status regarding the charging and recording status of the GoSafe 520, as well as various alert options. 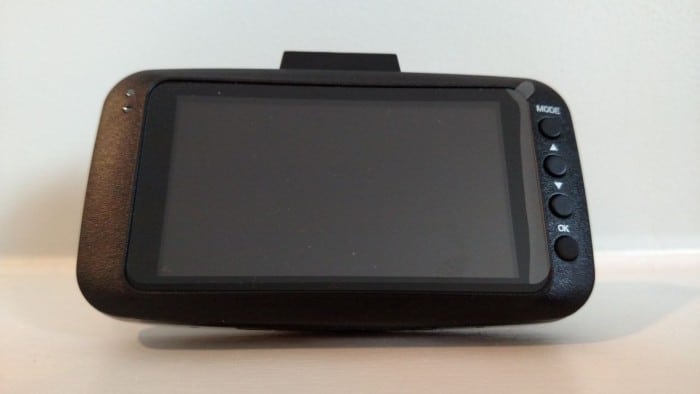 The top half of the GoSafe 520 is home to a mini-B USB connector that is used to charge the camera or transfer files to a computer using the USB cable. Centered on the top of the camera is the mounting bracket that attaches the camera to the suction cup mount. Just to the right are the power button and emergency recording button. While the GoSafe 520 will power on automatically when power is detected on the USB port, the camera can also be manually powered on or off via the power button. The emergency recording button can be used to manually keep a recording safe from deletion after an accident or event. 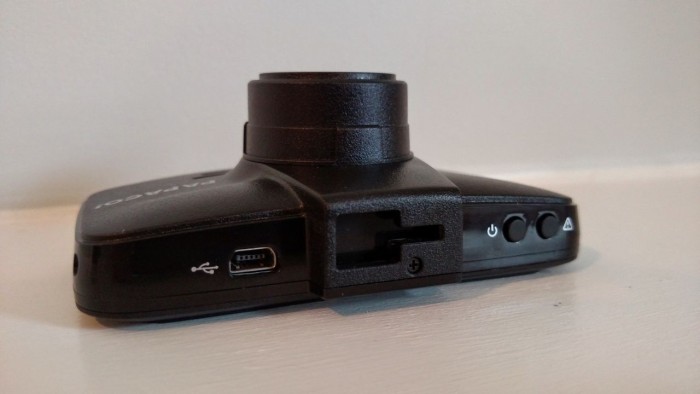 The bottom half of the camera features a reset button for restoring the camera and a microphone to pick up the surrounding sounds. 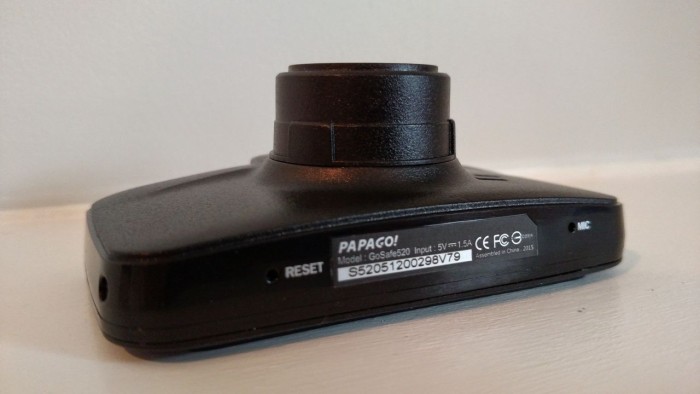 On the left side of the camera we find the MicroSD slot that allows for a Class 10 card of 8GB to 32GB size to be inserted for storage duties. The GoSafe 520 utilizes a loop recording system of five minute clips, that discards the oldest recordings as new recordings are taken. A Type C, Mini HDMI plug is also provided for direct video output to external devices. 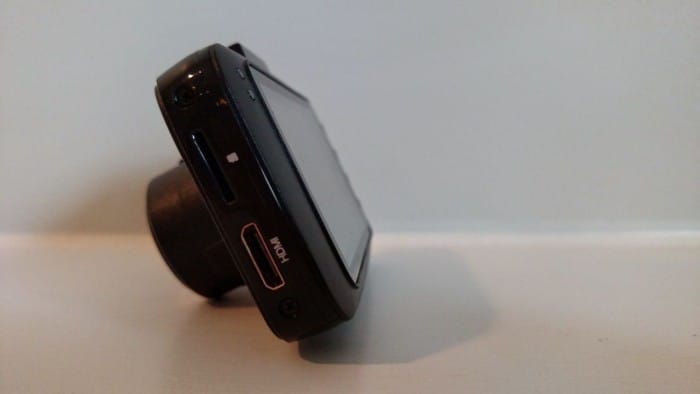 Included along with the GoSafe 520 is a user manual and warranty card, a USB cable for charging and data transfer, a car charger adapter to provide power to the camera during use, and a suction cup windshield mount. 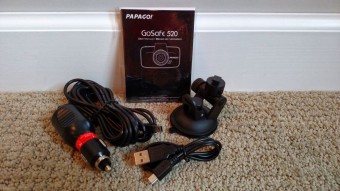 The power adapter cable is very long, which allows you to route the cable through your vehicle in the most convenient way according to your vehicle. A small red light illuminates on the charger when it is receiving power from the vehicle, indicating that it is also providing power to the GoSafe 520.

The mounting bracket features a sturdy suction cup to keep the camera in place at all times. An adjustable arm allows for both vertical and horizontal adjustments of the camera to compensate for windshield angles and various mounting locations. 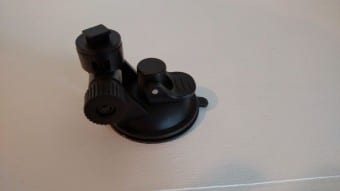 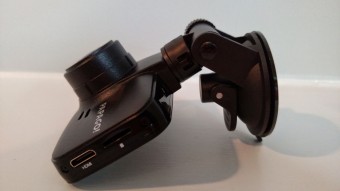 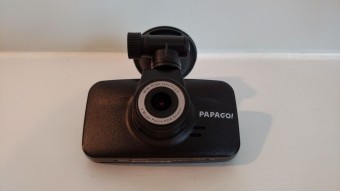 Installing the PAPAGO! GoSafe 520 couldn’t be easier. All it takes is a quick positioning of the suction cup base in the desired location, a little press of the base to secure it to the windshield, and finally a swivel of the locking mechanism to lock the mount into place. During our testing, which included travelling on bumpy dirt roads on a daily basis, the mounting bracket stayed firmly in place. Once you have the mount secured, you can then slide the camera onto the mount and lock it into place by sliding the camera to the side a bit. After that, you can adjust the mount’s angle and swivel settings to get the best picture for your needs. Our test vehicle has two 12V adapters; one that is always powered, and one that is only powered when the key has been turned. Since we didn’t want the 520 recording while the car was just sitting in the dark garage or in the parking lot in the middle of the day when we are at work, we opted to use the key-enabled power source. Thankfully the power cord provided with this unit allows for the camera to be installed in just about any location on the windshield, while still having spare cord. Once you have the camera set where you want it, and the power cord connected, you can hide the excess power cord in the seams and contours of your vehicle. While we weren’t able to completely hide the cord, it was definitely out of the way and did not get in the way of normal vehicle use.

The menu system on the GoSafe 520 is fairly simple, which is a relief. Many times, great products are dragged down by a complex and non-friendly user interface. That is not the case here. As you can see below, the menu system uses the four side buttons to perform basic tasks: Back, Up, Down, and Select. The menu interface has just the right amount of responsiveness to not feel sluggish, like some integrated menus on devices can. 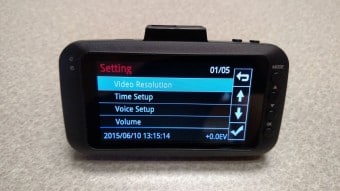 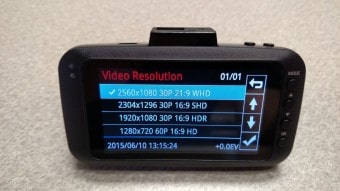 During our testing process, we recorded with multiple resolutions at various times of day and weather conditions. In each setting, the GoSafe 520 performed great.The clarity that the GoSafe 520 provides is a bit lacking, as we found ourselves wishing that the video was a little bit crisper. This is really a small complaint however, as the video quality is actually really good, as you can see in our examples below.

The audio that is recorded by the GoSafe 520 is a bit muted, but still clear enough to understand a conversation taking place, or what might be playing on the radio. The ability to mute the GoSafe 520 is also available for those that prefer that option.

In the first video below, you will see that part of our daily route involves traveling along a dirt road that is prone to the “washboard” surface effect. While there is quite a bit of vibration going on during this part of the commute, the video quality didn’t really suffer much. This video also provides an example of how the GoSafe 520 performs when the lighting changes quickly. On the dirt road portion, the trees that line the road do a great job of blocking the sun, but the open patches that allow light through didn’t cause the camera to struggle between exposure settings.

This video shows off the wider viewing angle that the 2560×1080 resolution provides. Again we have a light to dark and then back to light change when travelling under the overpass at the beginning of this clip. The PAPAGO! GoSafe 520 had no trouble keeping up with the lighting changes, and provides plenty of detail in both settings.

In the video below you can see how the GoSafe 520 performed during night-time driving. While the camera has a tough time picking up surrounding areas in low-lit areas, our highway driving provided plenty of detail and clarity.

Overall, the video quality that the GoSafe 520 provides is top notch. There are a few instances where the clarity is a bit lacking, but in the case of an accident or emergency, this camera will help to provide the necessary evidence to help you prove your case if it comes down to that. It also has great color quality and can provide some really great shots of scenic routes.

Before we get to the conclusion let us briefly touch the issue of legality of a dashcam. Make sure to check the laws where you live before adding a dashcam. In some countries dashcams are legal and in others they are not. In the US dashcams are basically legal when it comes to the recording of video, however any audio recording of conversations inside the car can get you in trouble unless you make sure everyone in the car realizes that the recording is being made. Basically make sure to just check what the law is in the location you are before putting up a dashcam.

“Not if, but when.” This simple phrase relates to many aspects in life, including automobile collisions and accidents. The odds are stacked against us, and sooner or later, most drivers are bound to be in an accident of some sort. While it seems like every other day you hear of someone being sued for damages, being able to prove that you were not responsible, and in-turn liable, for the accident can be invaluable. The PAPAGO! GoSafe 520 can provide the evidence you need via clear, high-definition video recording capabilities in a compact package. Resolutions of up to 2560×1080 are available, while lower resolutions like 720p can also be used to save on storage space, and extend the amount of recorded video available. The wide 146 degree viewing angle provides a great look when stopped at intersections. Traffic from both sides is easy to see, and provides an encompassing picture of what is going on.

Installation of the GoSafe 520 is a breeze, thanks to the included suction cup bracket and power cord of ample length. The built-in screen on the 520 allows you to tweak the settings of the camera to your liking, and also allows you to set the angle of the camera just right to ensure you have the best shot of the road. Not having to power on and start the recording every time you utilize your vehicle is a great feature as well, thanks to the included power adapter that keeps things automated.

We found the PAPAGO! GoSafe 520 at various online retailers priced anywhere from $160-180. That relatively low up-front cost may save you innumerable amounts of money by providing the evidence you need in the event of an accident. While we hope you never need to utilize this feature, just knowing that it is there can provide a little extra comfort on your commutes. It doesn’t hurt that the GoSafe 520 can provide great footage from scenic road trips either.

If you are in the market for a dashcam for piece of mind or for recording your travels, the PAPAGO! GoSafe 520 is a great option.

If you are in the market for a dashcam for piece of mind or for recording your travels, the PAPAGO! GoSafe 520 is a great option.