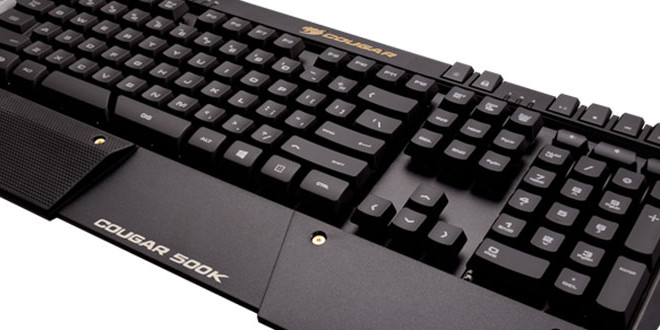 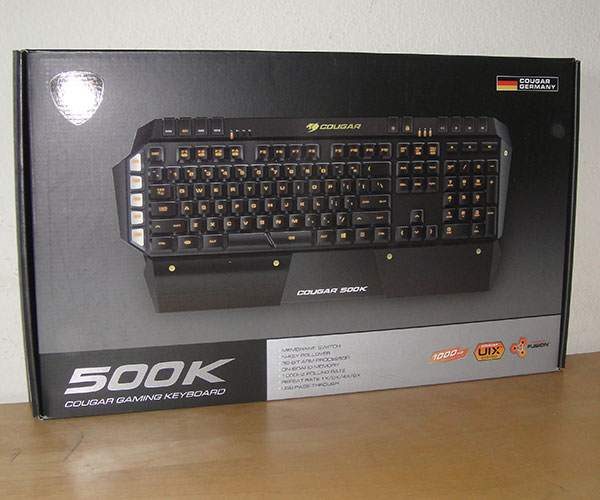 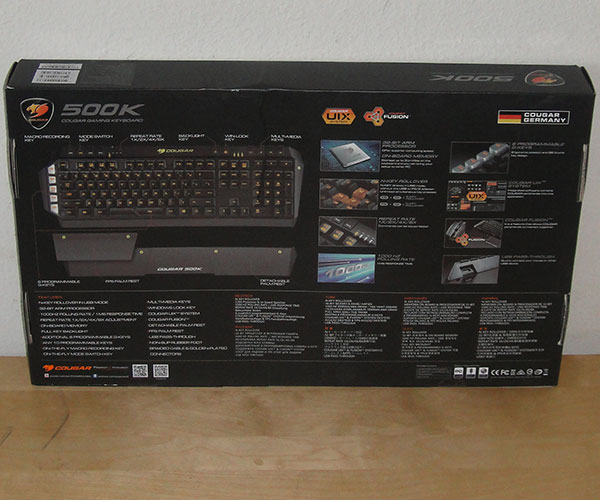 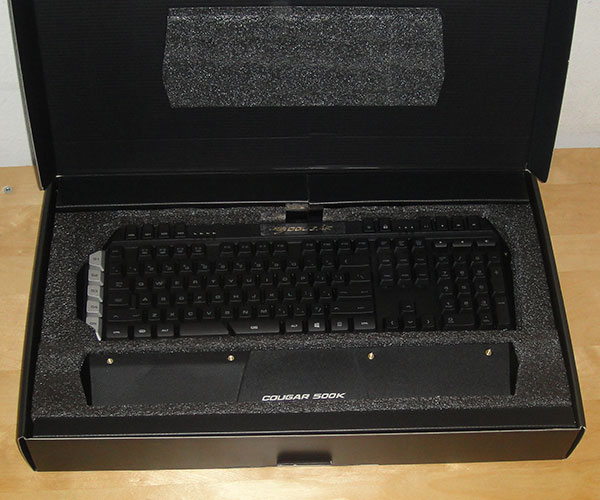 As with any gaming keyboard, the 500K is packed with features important for gamers. Upon first inspection, it would be hard to tell the 500K apart from its bigger brothers, the 600K and the 700K. All of the current line of Cougar’s gaming keyboards look exactly the same, with the same physical layout and the same number of special keys. 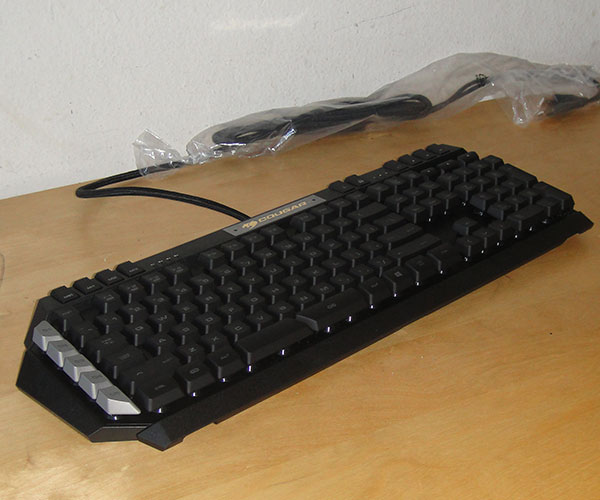 The main difference between the 500K and its bigger siblings is the membrane switches as opposed to the mechanical ones found on the 600K and 700K. Besides the switch type, the 500K also uses a plastic material as opposed to the aluminum frame that is found on the 700K. This makes the 500K lighter than the 700K at less than 1 kg (as opposed to 1.2 kg). We actually prefer to see the metal frame over the plastics as it provides a more premium look and can withstand more torture in the long term. On the plus side, the lighter weight makes the 500K easier to carry around. 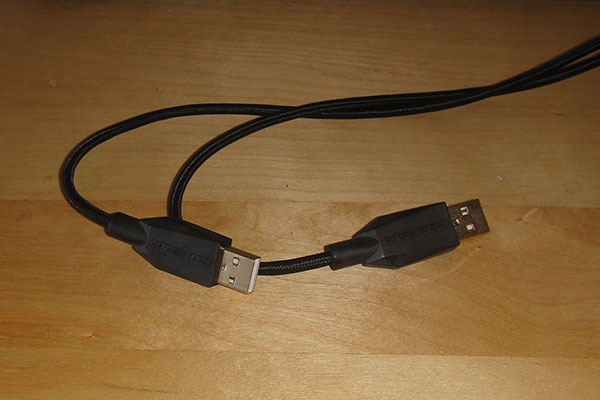 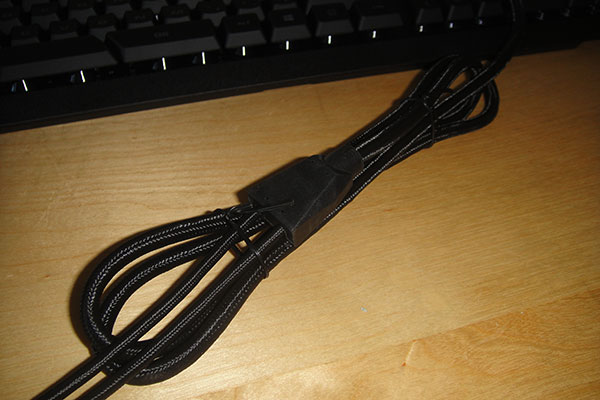 Furthermore, the 500K also lacks a dedicated 3.5 mm audio jack that is found on the 700K. So, you would have to plug in your gaming headset to your PC’s front or rear ports instead. While slightly inconvenient, it is nothing to scream about. 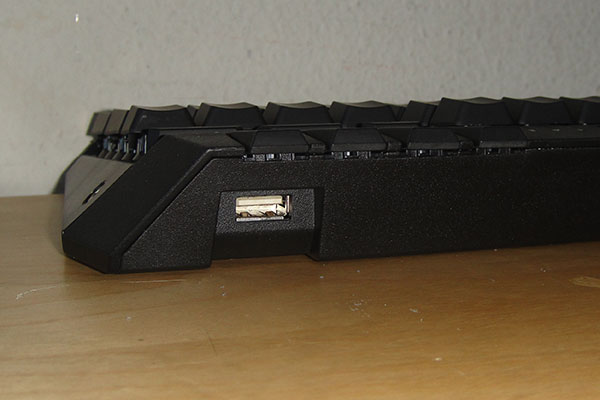 Luckily, Cougar kept the USB port on the keyboard so you can plug in another device like a mouse, USB storage or a USB headset to the keyboard. Unfortunately it is only USB 2.0 speed. The same 1.8 meter braided USB cable with gold plated connector is attached to the keyboard and your PC. 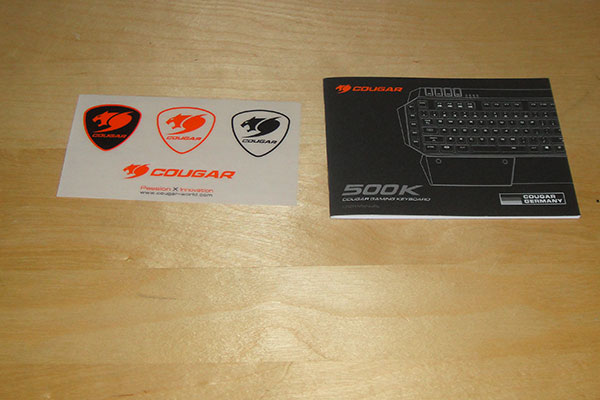 Cougar shipped the 500K with a few case stickers and a manual booklet. The keyboard did not come with a driver/software CD, but you can just download directly from Cougar’s website for the latest version. The keyboard will work with Windows XP and higher and both 32-bit and 64-bit versions are supported. 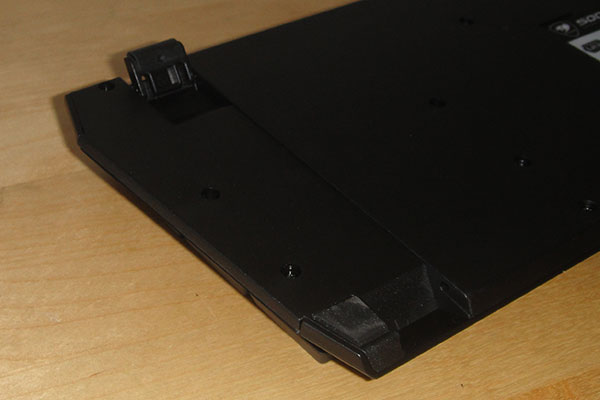 The 500K is slightly slanted without extending the feet. The keys are raised a bit higher than your typical scissor switch keyboard. Combining the two, they make the keys easier to access. If you need more adjustments, you could always extend the feet underneath the keyboard. The feet are rubberized to provide extra grip so that the keyboard does not slide on any surface. 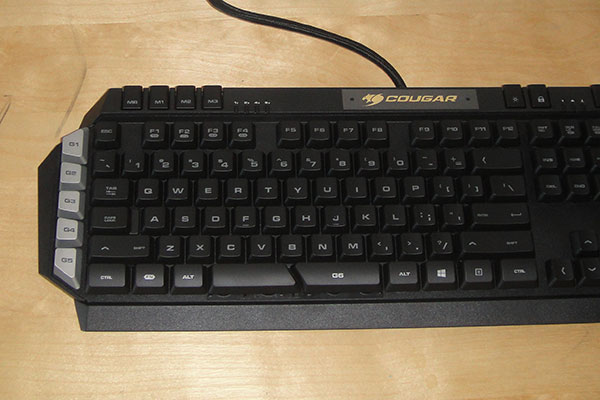 The main area is pretty standard with your 104 keys. The letters on each key are larger than your typical keyboard, making them easier to read. When the backlighting is enabled, they are comfortable to read and not overly bright, even at their highest brightness. Even with the backlighting off, the letters are easy to read in a dimmed room. However, the larger letters make the keys with alternate characters, such as %/5, &7, as well as the number pad and arrow keys, etc. visually crammed.

The space key is has been split in two pieces, a design that is often associated with the split keyboards as opposed to the standard rectangular keyboard. At the default setting, the left space bar functions as space key while the right space bar (G6) is a programmable key. I am not a huge fan of the left key set as space as I often press space bar with my right thumb when typing but luckily Cougar’s software allows you to fully customize the keys so you can set to either one or even both key for the space. 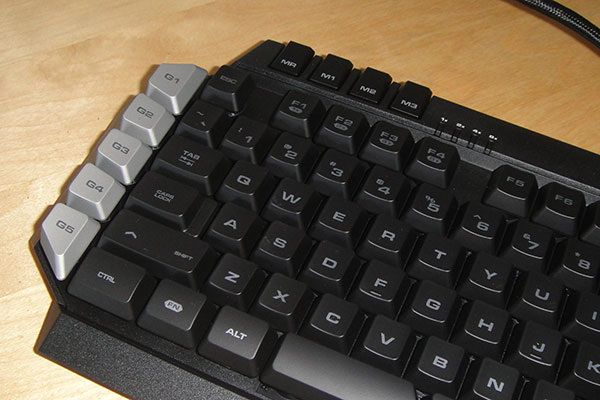 Another deviation from the standard layout is the Windows key. Normally you would find such key on next to the left Control but Cougar has decided to swap it for the Function key that is used to control the repeat rate when combined with F1 to F4 key. The Windows key has been moved next to the right Control key. By shifting the Windows key to the right side, it prevents accidentally hitting it to exit games, something that gamers would appreciate. Although if you are used to the Windows key on the left side of the keyboard you could again customize this with the UIX software and then rely on the Windows lock key located on the upper right hand of the keyboard to disable the Windows key. You would need to swap the key caps and unfortunately, Cougar did not include a tool to help remove the key cap.

In addition to the G6 key, there are five more programmable keys (G1~G5) located on the left edge of the keyboard. Notice that G1 to G5 are angled toward the keyboard so they are easier to access. The 500K’s layout allows the programmable keys, space and the WASD keys to be within reach without much hand movement to give you maximized response time in games. The G1 and G6 are a bit far away, which would still require you to lift your hand a little to get to them. The G5 is also a bit lower so it would require a bit hand movement. While the proximity of the G1 to G5 programmable keys make them easy to access in game, I found that during regular typing, they can get in the way. When typing at a fast pace, I would accidentally hit the keys from time to time when I was trying to press Shift or Tab. It takes a little training to rewire myself but I eventually I got used to the layout after a couple of days of using the keyboard. 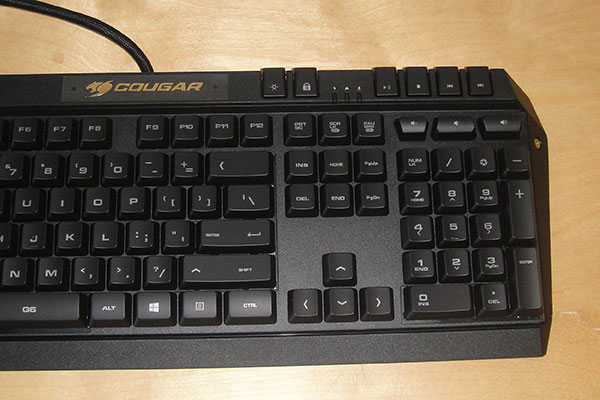 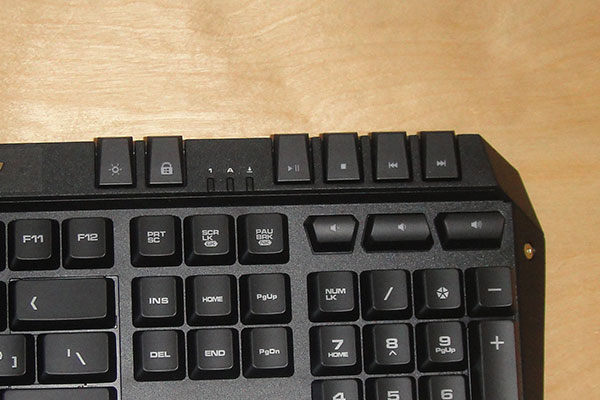 Moving along the top edge we have the backlighting brightness control and the dedicated Windows lock key. Toward the right side of the keyboard is where the multimedia keys are located. We have the Play, Pause, Fast-Forward, and Rewind, Mute On/Off, and the volume adjustment. The volume control keys are placed lower than the numpad keys, making it harder to press them than the rest of the keys on the keyboard. 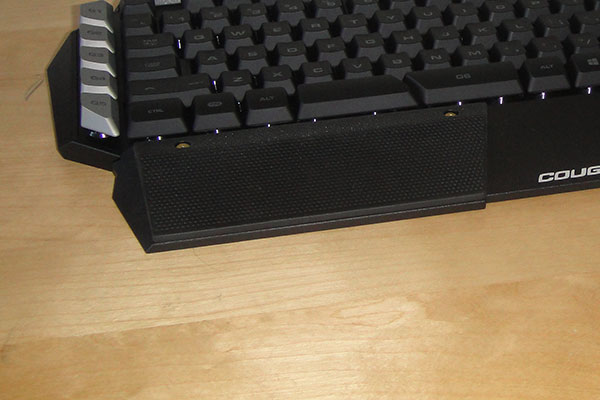 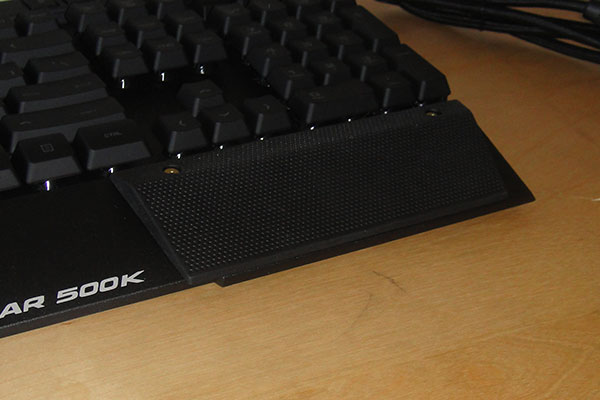 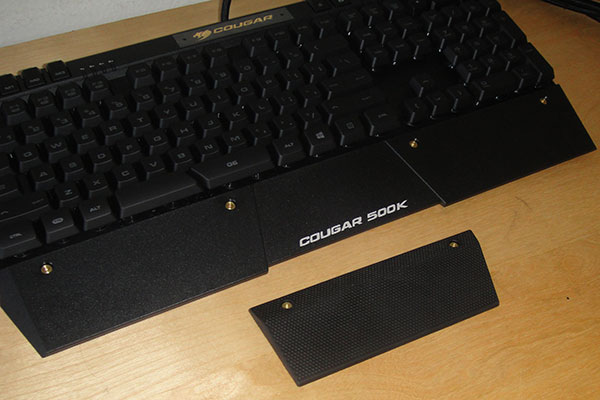 Like any gaming keyboard, the 500K has a backlight that glows orange in color. There are five preset modes to choose from: four levels of brightness control (0% 33%, 66%, 100%) and one special setting that Cougar calls “breathing” mode. The “breathing mode” is a dimming effect that looks pretty cool. Unfortunately, orange is the only color available for the backlit keys. So, if the Halloween themed orange glowing light on the black keyboard is not your cup of tea, you would just have to live without the glowing light. Unlike the 700K that features individual key backlighting control, the 500K’s backlighting can only be applied to all keys or none at all. We actually like the individual backlight adjustment found on the 700K, so it’s sad to see it is not found on the 500K.

The Cougar 500K just maybe is the keyboard that you are looking for if you are on the market for an inexpensive gaming keyboard without the clicky sound of a mechanical switch that works in games as well as general use.