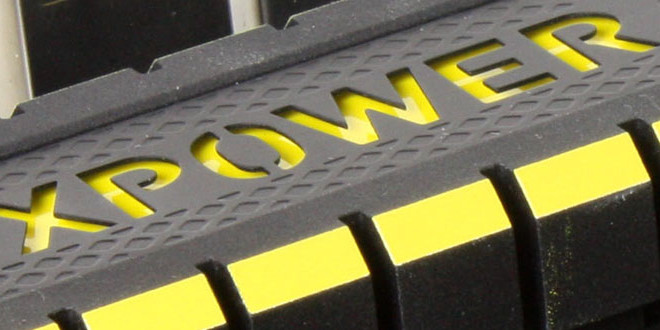 We will use the following applications to test the performance of the Z97 Chipset (Motherboard, Processor). 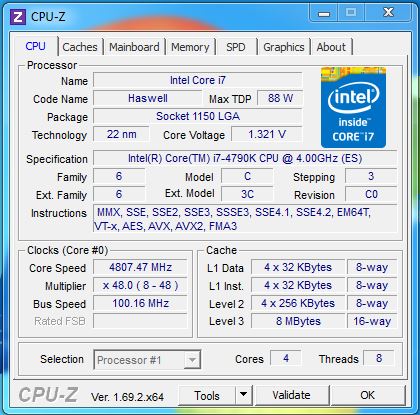 Well we are 3 boards in now and while the screenshot may be the same I can say that the result are close enough to pretty much call it, as I have tested my retail and ES sample CPUs it is clear that much like Sandy bridge these chips hard wall at a certain point and well thats simply where you are stuck. Will it go farther when under cold? this I hope to find out soon as I fire up a Single stage or maybe just dip back into LN2 with this very board and test that but that is also pending available time to do so, but if I get the chance to do so you can bet that I will have a report here via a separate article to show my findings. 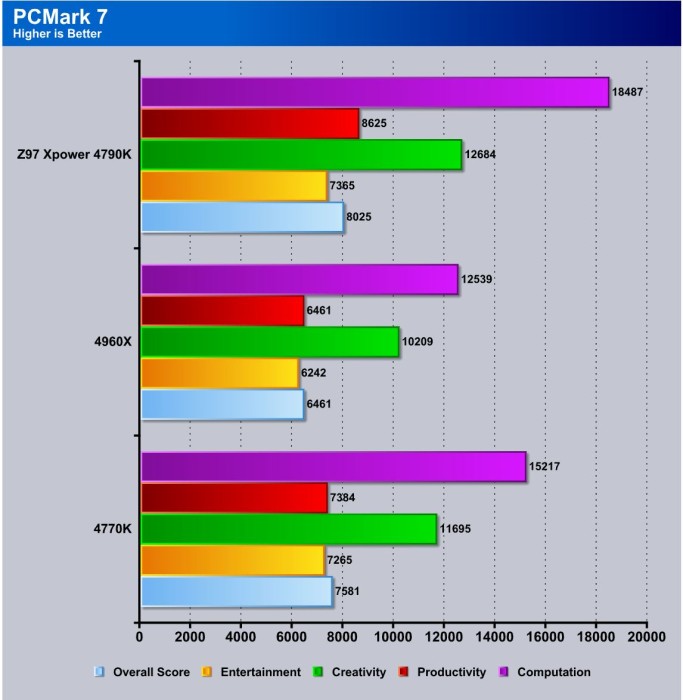 PCMark like we have seen is simply capped buy whatever speed the CPU offers the board offers a percent or two in efficiency as we see the Xpower outgun the other two we have tested to date by a very small margin but that is a small bump at best. 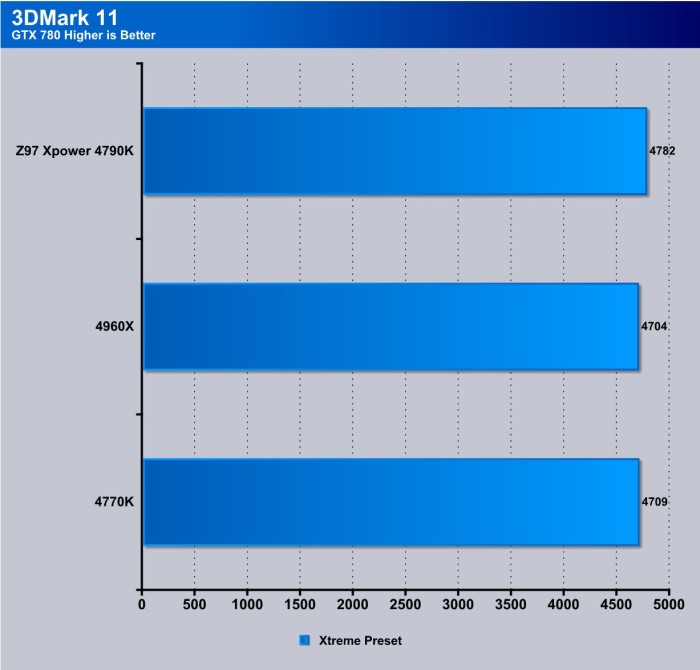 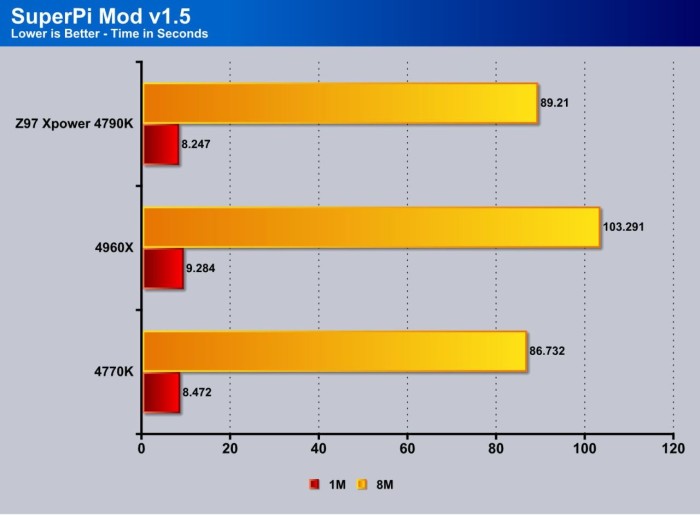 This tests single threaded performance and clock efficiency by processing digits of the number pi. The Xpower pulls a little efficiency here and this is where BIOS tuning I believe will come into play. Future BIOS revisions may even unlock a bit more as they are more finely tuned. 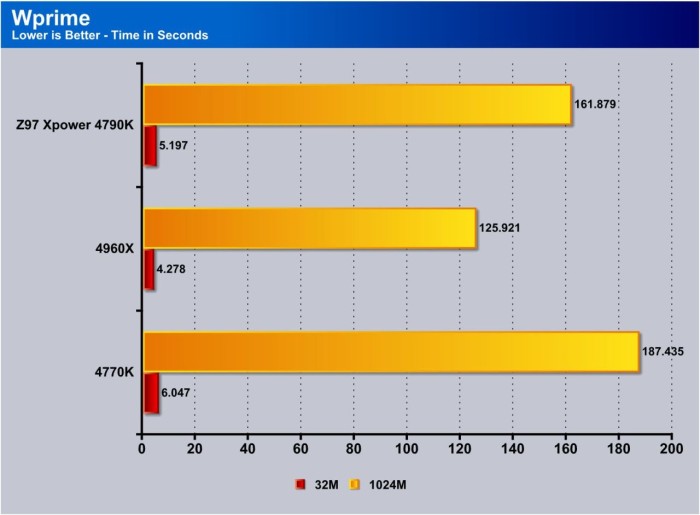 WPrime is similar to Superpi, but is multi core aware and you can set the core count. We used 8 threads to take advantage of the 4770K & 4790K’s HyperThreading ability and also 12 thread for the 4960X and as you can see the 4960X simply has more raw muscle via 4 extra threads but the Haswell to Haswell comparison shows that the higher clockspeed of the new Devils Canyon chip simply does work and does it well. 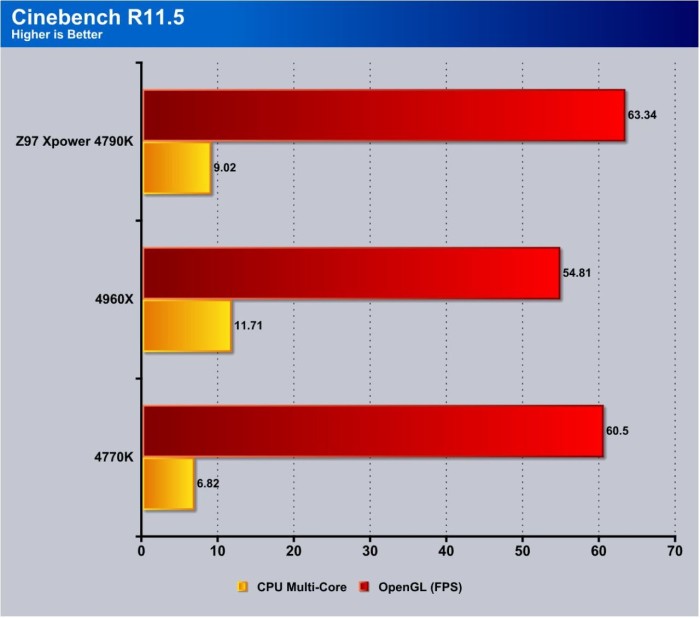 The Cinebench tests show X86 performance between the Haswell models being similar to the other results as the 4790K is much faster with computation than the 4770K, what was a surprise was to see the OpenGL tests see some increase as well. 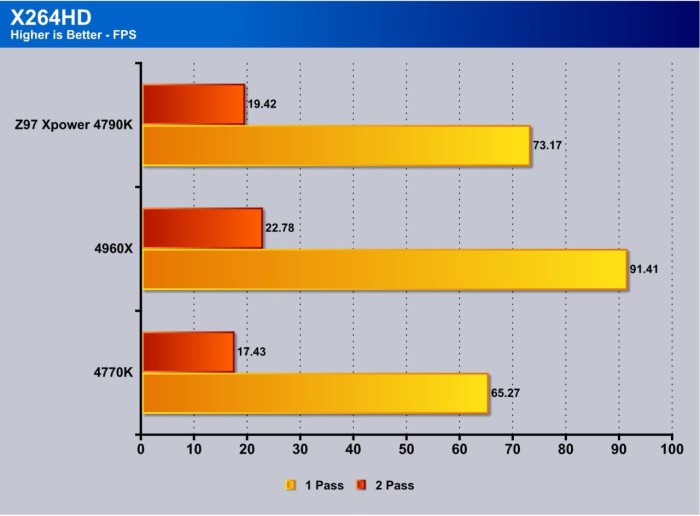 Transcoding has become more popular now and the latest Sandy Bridge processor added support for AVX instruction for faster video transcoding. similar to previous boards the results are close although the Xpower does have a bit better efficiency again here pulling slightly better than the previous gaming series boards from both MSI and Gigabyte. 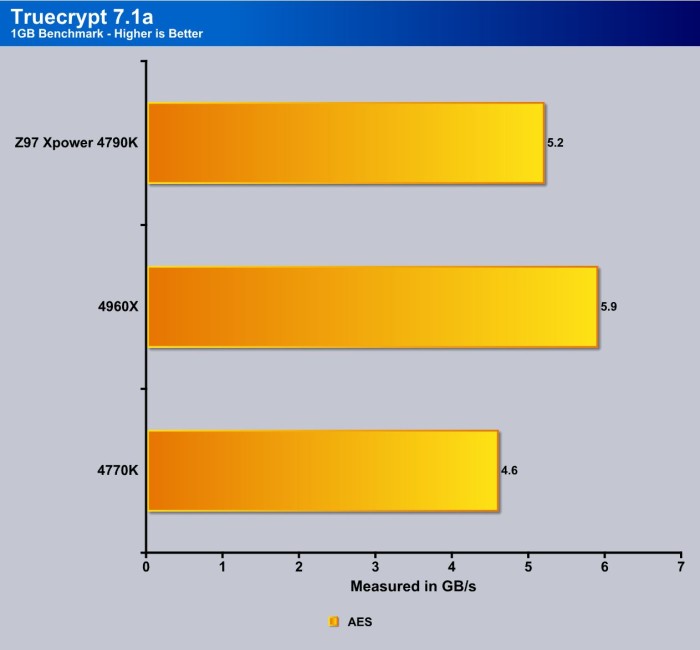 TrueCrypt is a real world application that gives a good indication of the true performance of our latest processor. These results are a dead heat between the previous boards we have tested which just goes to show how linear this new platform is. 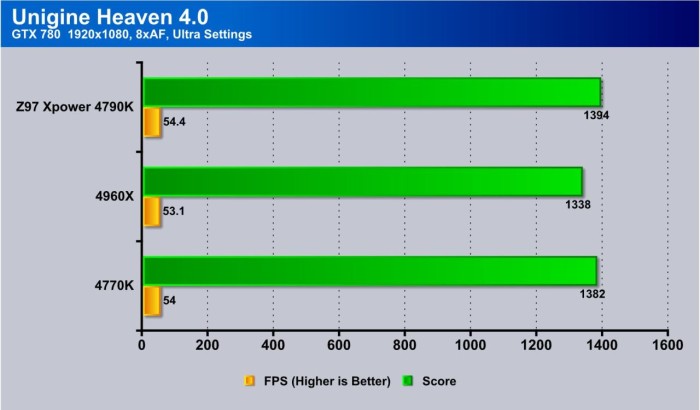 Unigine we see similar results with the graphics performance being almost identical. 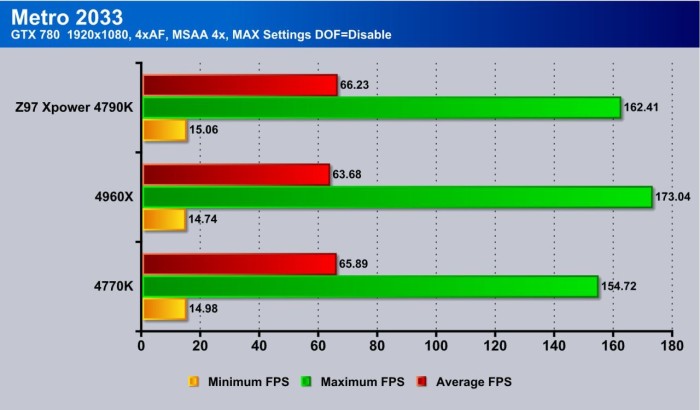 Metro 2033 shows slightly higher max FPS for the 4790K which means the higher clockspeed is allowing a bit more performance at the uncorked side of things but overall the average FPS is almost dead on similar. 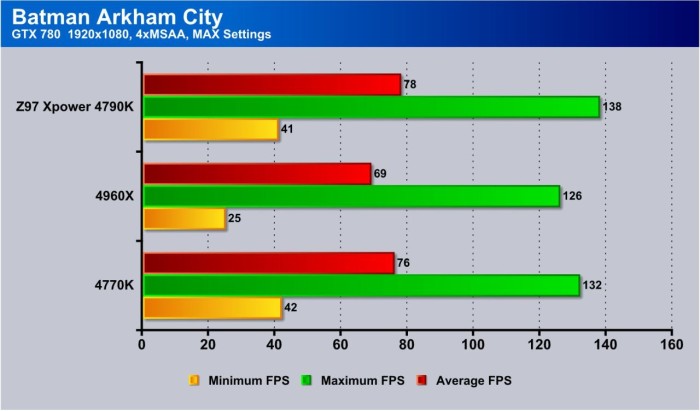 Batman AC we see similar where at the top end we gain a few FPS and even a couple FPS on average which tells me that the higher clock speed may have shown a bit of the game being CPU bound so the higher speed simply allowed it to hold higher FPS longer. 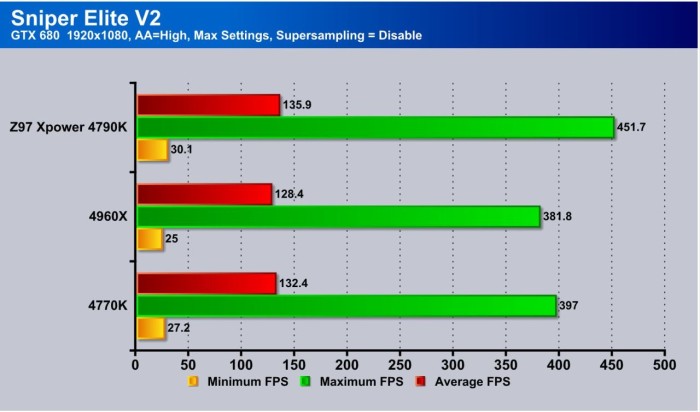 Sniper Elite V2 is awesome and I have watched as platforms have surpassed it and now it hits ridiculous levels of FPS at the top end but I still love it because it shows what can happen on the top end when completely uncorked and as you can see Haswell to Haswell comparison you gain over 50FPS on the new 4790K at the top end which undoubtedly translates to a bit higher average as it can reach much better FPS overall and the minimum FPS jumping a bit is also good here as that means that less jerky moments during gameplay.