The X79 platform overclocking capability is similar to what we saw before and of course with 6+ core CPUs we are talking much higher voltage levels possible to be used under normal operation versus what we have gotten used to with the Haswell and Ivy Bridge mainstream models. Even with this the chips are designed to take more so the auto overclocks set on this board setup in excess of 1.5Vcore and it will run well at this however i feel its a bit higher than it could be so even when setting something like that i always advise rolling the voltage down step by step to find where the chip truly is happy at. The reason the overclock presets are so high on voltage is the fact that the variance on chips can be pretty wide so ASUS tunes the presets to be a safe setting for most chips, but if you do get a chip that performs better than you can adjust it down possibly by a sizable amount

The Black Edition reaches our test frequency with more than just ease it is almost too easy and even the gamer presets in the BIOS easily surpass the 4.6GHz speed we use for testing. so with that said and the LN2 nature of this board on top of the fact that previous to its retail introduction the board has taken some of the top world records very quickly in teh right set of hands.   this board is a monster just waiting to be let off the chain and just find a reason to get it cold and it can really deliver.

Add to this the extensive features with the OC Panel and there is alot of room for extensive tweaking and tuning with the Black Edition pending you have the hardware capability from the CPU and memory front. 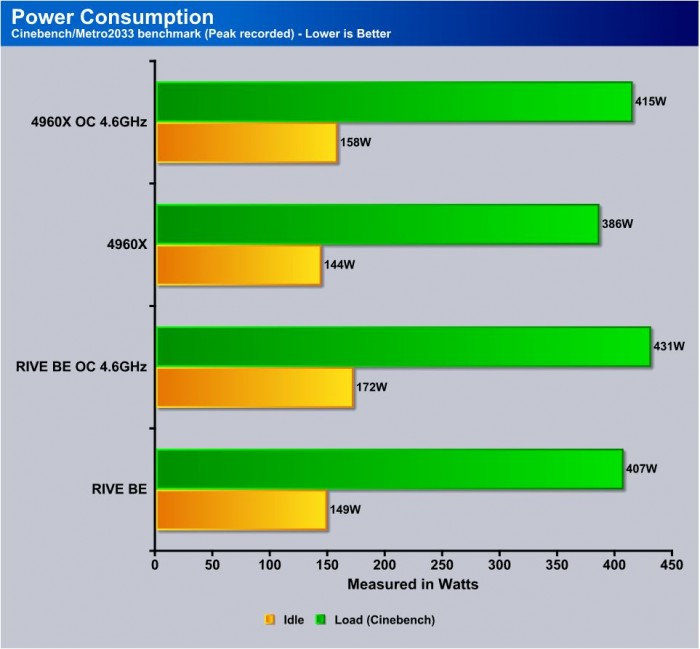 The power consumption tests show that the Black edition pulls a bit more power but with the extra features added to the board along with controls IC’s and the such is not really a surprise. 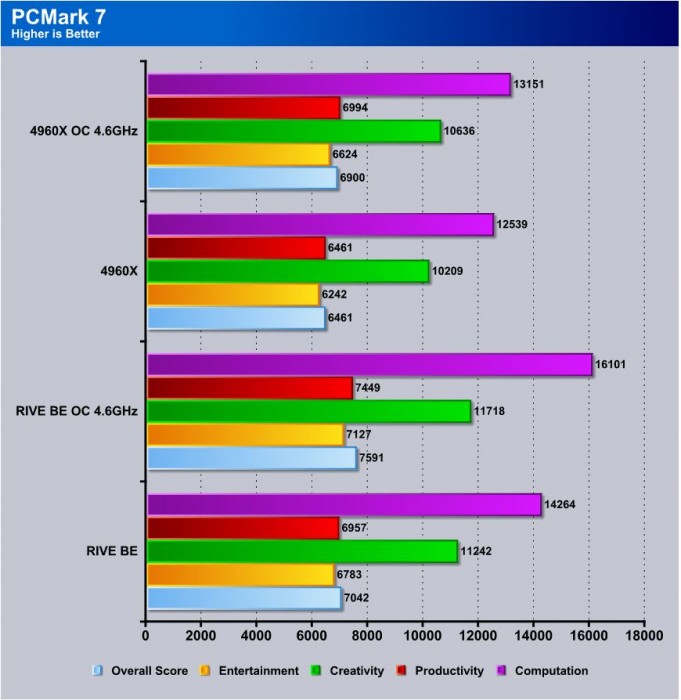 Here with PCMark 7 we see that the strong performance already seen on the 4960X gets a bit better as the optimizations are put into use with the new Black Edition board. 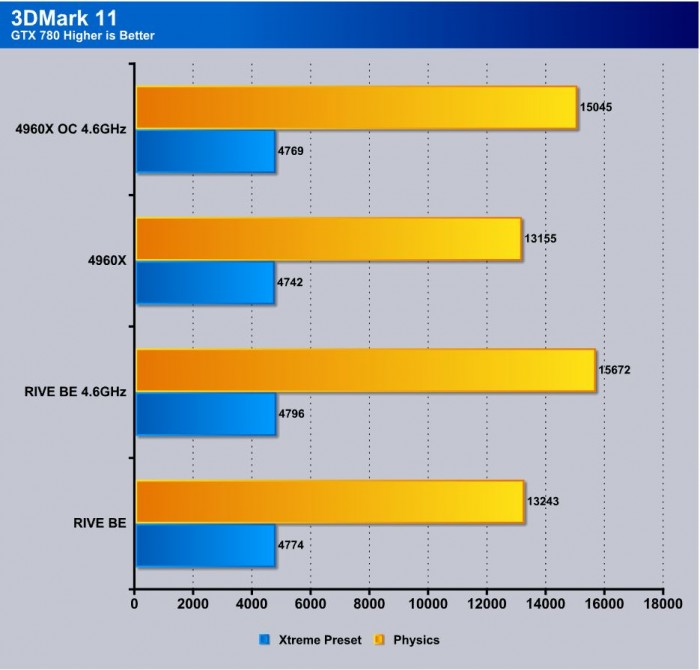 Here you can see the jump from the extreme to the Black Edition allows for a nice Physics jump which is of course a CPU based test. 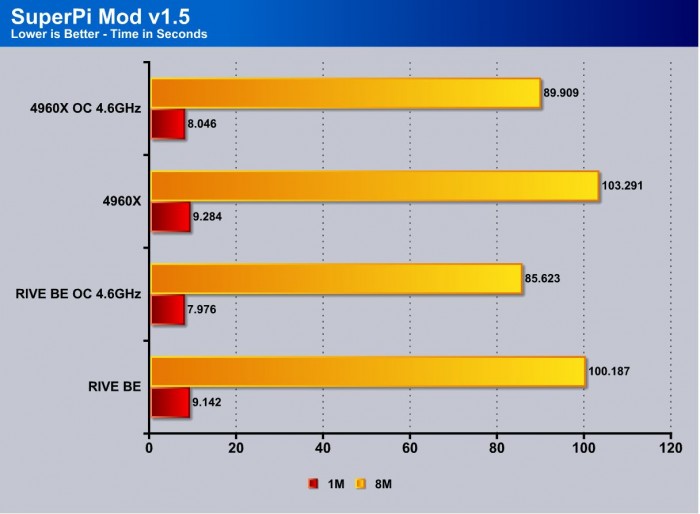 The Black Edition shows a nice efficiency jump here which definitely speaks well to the tuning for the Black edition which is what this board was built for. 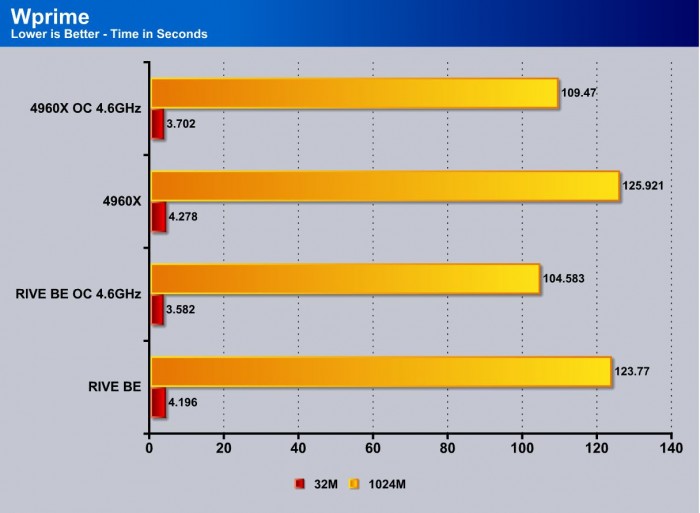 WPrime tests multi threaded performance much like Superpi but with all cores/threads depending on how many threads you tell it to test with. Overclocking will definitely improve this score but first and foremost it is worth noting that at stock speeds changing to the Black Edition shaved over 2 seconds on the long test which means taht any operation using all of the threads such as render or other productivity work can be completed quicker with the optimizations of the Black edition board. 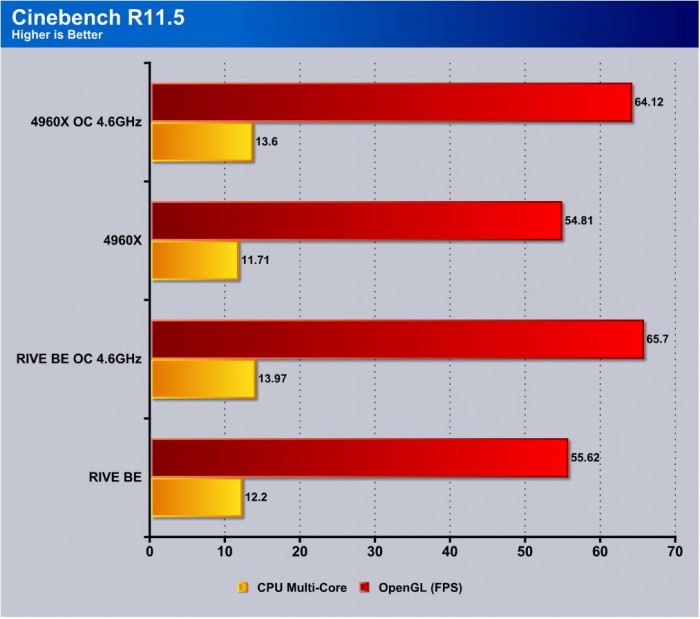 Cinebench is all about rendering and the CPU multi core tests shows this capability and any improvements in the process of completing the job with platform or clockspeed changes. Here you can see that the Black Edition gives about a 5% increase in relative CPU performance at stock clocks over the Rampage IV Extreme and a little over 3% when overclocked at 4.6GHz. 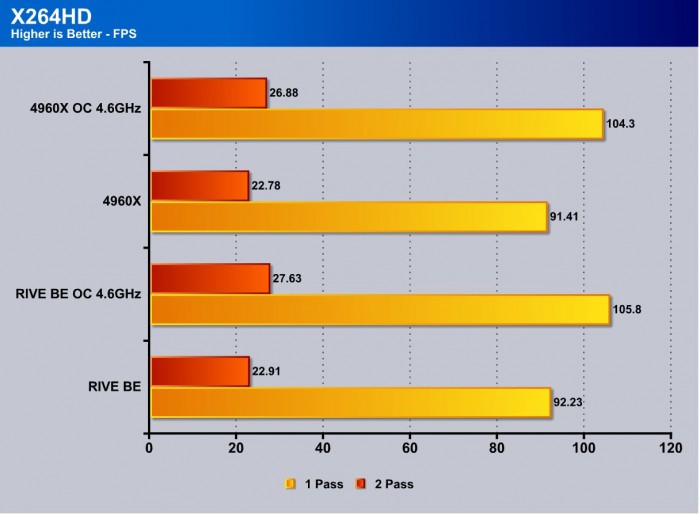 Transcoding has become more popular now and the latest Sandy Bridge processor added support for AVX instruction for faster video transcoding. With the new Ivy-E performance inches forward more here and you can see that even with same CPU and components a board taht is optimized for the components being used can add some definite measurable performance. 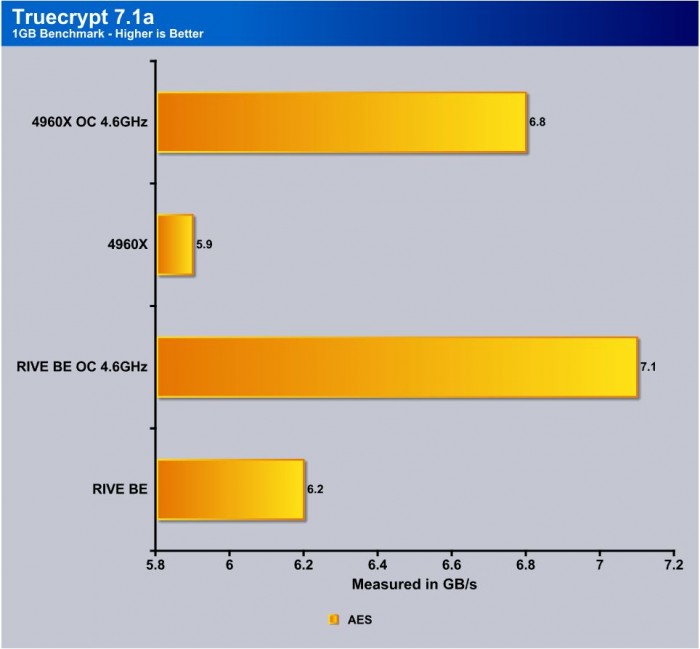 TrueCrypt is a real world application that gives a good indication of the true performance of our latest processor. Here the 4960X gets a nice bump with the new Black Edition board. 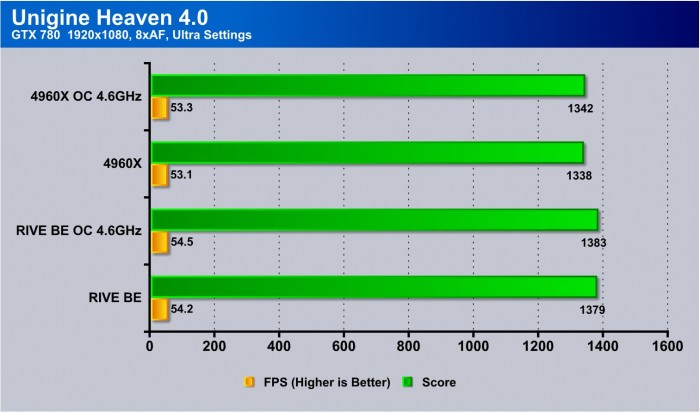 Unigine Heaven using a GTX 780 card shows very good performance and jumping to the black edition jumps a few percent which shows that even the PCIe and Graphics performance is improved when switching to the new optimized Black Edition. 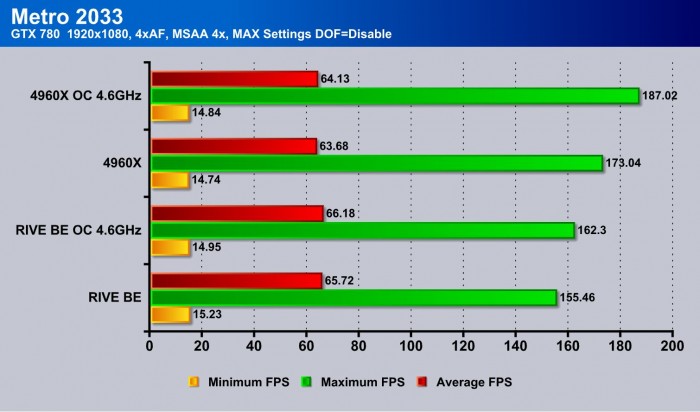 Once again, Metro 2033 shows that discrete GPU performance is improved via the optimizations gaining a couple FPS jumping from the Extreme to Black Edition. 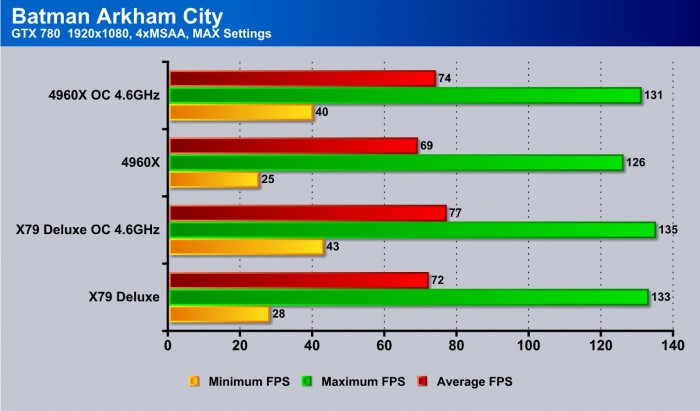 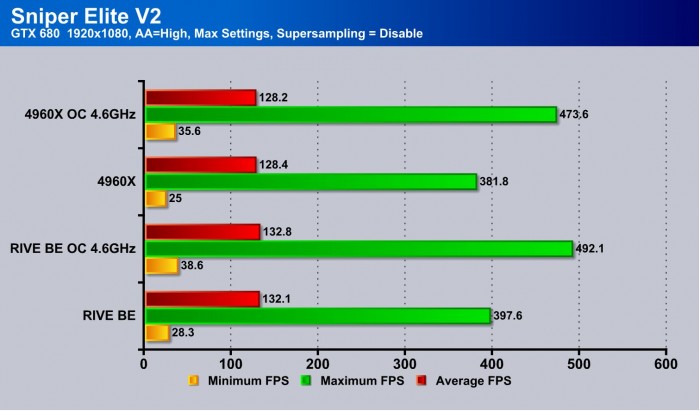 Continuing the trend you see that the change to the Black Edition make a few FPS bump over the previous Rampage board.

ROG has recently made some very interesting innovations and products, and with the recent innovations such as the constant improvements to SupremeFX audio solutions, VRM designs and even T-Topolgy memory trace layouts the benefits simply continue to stack.

Well with the Black Edition Rampage ASUS really kind of rolled up all of the innovations they have worked on in the previous few board generations and especially in the Z87 lineup to give the board the very best in potential performance for the enthusiasts users.

Black Edition styling without a doubt makes for a menacing board look and one that should readily fit pretty much any build you wanna throw it at.

Pulling in their network team to implement a WiFi AC solution means that not only is the system fast but even the connectivity gets a nice boost as well.

The Con if I were to find one would likely be that the price carries a pretty hefty bounty and there is no doubting the fact that there are many boards that could be had for less but at the same time ASUS also introduced another Ivy-E optimized board so that this board is available for the extreme users whereas the Deluxe can meet the needs of the users who maybe dont need some of the ROG trickery or Overclocking advances.

In conclusion ASUS and the ROG team did a great job at introducing another board that can gladly wear the ROG namesake and even carries a quite huge host of extra features for enthusiasts users so taht anyone jumping in the X79 platform and needing ultimate Ivy-E Performance and features you really cannot go wrong here but if you already have a Rampage IV Extreme then you should be ok with that unless things like the WiFi are a huge deal for you.