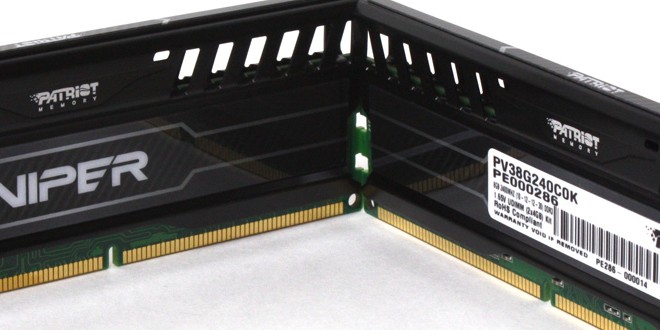 Patriot has been in the market for a long time but it is the lesser known little brother in the memory game. However this has not kept them from making some very cool memory models among other devices such as USB flash drives, mobile wireless storage and even a Android powered set top box and im sure many more things I cannot even think of right now.

But without getting too crazy off topic what we are looking at today is their model from the Viper III series labeled “Black Mamba” which is very nice looking sticks with aggressive heatspreaders and a very aggressive speed/timing configuration. Being named Black Mamba I could only assume means to assert the aggressive and deadly power these sticks hold within.

Normally when you start getting above and beyond 2133 or so you start to really see the timings run away getting up to CL11 even 12+ so to see this black Mamba kit at 2400 with CL10 is great. Also being that this is confirmed MFR IC’s these should play well with our new Haswell platform and that is our goal this go around.

The 8GB kit you see here retails at Amazon for $92.33 which is quite reasonable for a nice kit with MFR IC’s. There is another aspect at play here which is quality of module which is what makes the difference between some modules you can get at slightly lower costs. I have used Patriot memory for quite some time in many builds and even benching and they are stout modules.

With that said lets take a look at the modules and move on with what these modules are all about. 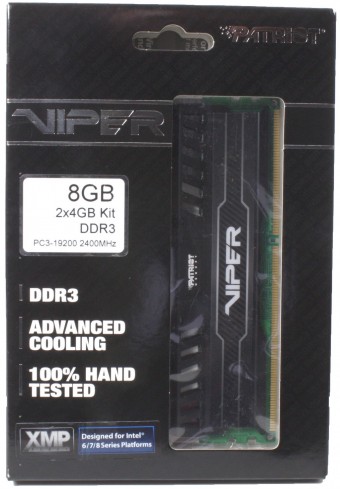 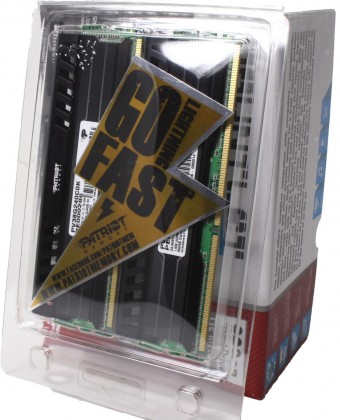 This modules come like so many we have seen before in a blister pack with an outside box cover to allow some marketing or logo placement. After removed you can see the large sticker that comes with the modules. 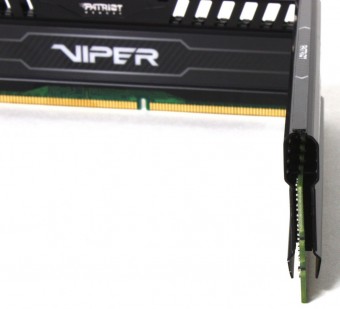 Here are the modules—the heatspreader is an aggressive Viper III design with a nice Gloss black finish. as you can see the only thing I wish I could see would be black PCB which would look simply sick but being as these are gonna be installed into slots the PCB color is gonna be moot unless you spend all day looking at your PCB on your DIMMs. I personally see mine at a passing glance through the chassis window but I rarely spend time gazing into it endlessly unless its my OCD kicking in telling me to clean it.

These modules as you can see are XMP profiled for 2400MHz with quite aggressive timings at CL10. This should allow for some great performance but I still wonder how much headroom there is in these modules as I know the Haswell platform responds especially well to the ICs on these sticks I can only hope this is a good base to start from at which can only be built upon.

One thing to note right off the bat is that anything past 1600MHz-1866MHz will not net you anything on a stock clocked 3770K. The architecture is just too efficient and therefore the higher memory frequency simply cannot be seen without the CPU moving a bit faster. In order to make this simple we overclock the CPU to 4.6GHz to ensure there is no possible bandwidth bottleneck on the CPU end and to best show any performance gains from these modules. 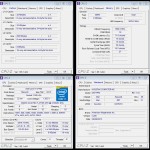 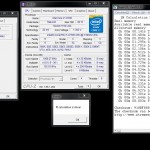 The memory as it stands is 2400MHz with pretty tight timings which is awesome, but being the overclocking section of the review we don’t care one bit about XMP here and we want to see what these modules can do. Upon giving it a small amount of loosening i could get the modules to bench stable at 3GHz 11-14-13-35 which is very good and at a VDIMM fo 1.7V  now this is not to say that these cannot do better as depending upon IMC and even thermals I’m sure there is a lot more in them but this is to show what about 12 minutes time finding where the DIMMS were happy could give. Now mind you C11 at 3GHz is very good and who knows with getting them cold maybe you can even squeeze them down to C9 or maybe just squeeze for more MHz but for a kit rated at 2400MHz to get 600 MHz extra with slightly looser timings is really quite good especially since they are on air with no supplemental cooling on them.

Tightening the sticks can be accomplished to a small degree but out of the box they are running pretty close to where they will be stable so I focused more on the frequency and the fact that we could hit 3G+. 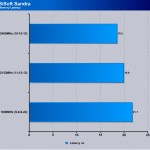 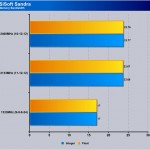 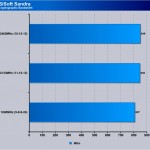 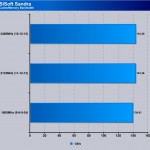 Here you can see that moving from the 1600MHz SPD to 2133 gives a nice gain, and moving to 2400 with the low XMP timings the latencies fall away and performance notches up a little bit. 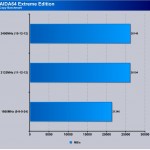 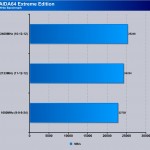 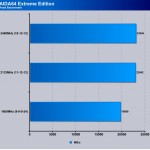 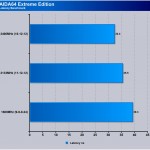 AIDA64 shows similar results as the jump is huge from the SPD default to XMP profile. and here again we see latencies fall off a lot but you will notice that as we said before still holds true as you approach the 1866-2133 area the return gets less and less apparent on most real apps except benchmarks and number crunching apps.  Possibly even some real world productivity applications. 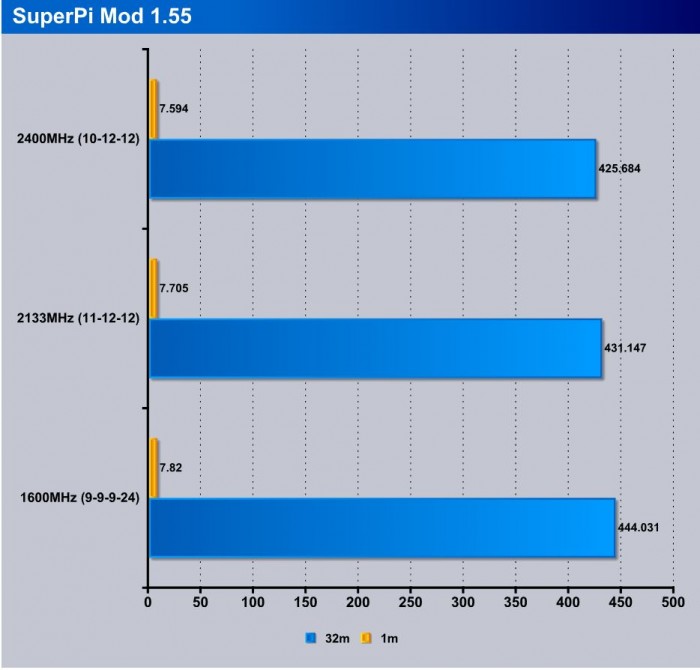 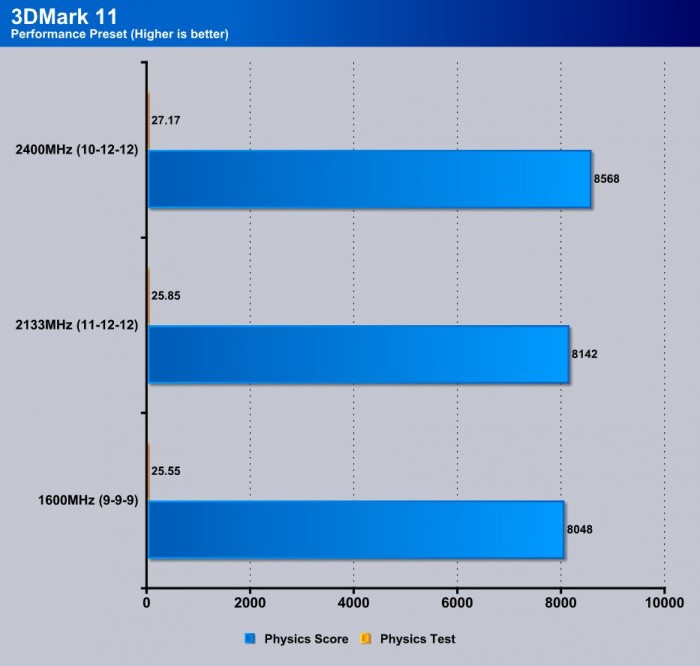 3DMark 11 is a nice synthetic benchmark which represents 3D gameplay. For this we are using the integrated HD4600 running at performance preset and we am only interested in the Physics score and test results. This is a CPU bound test and there is some gains seen by the increases of memory speed and also tightening up the timings where available. 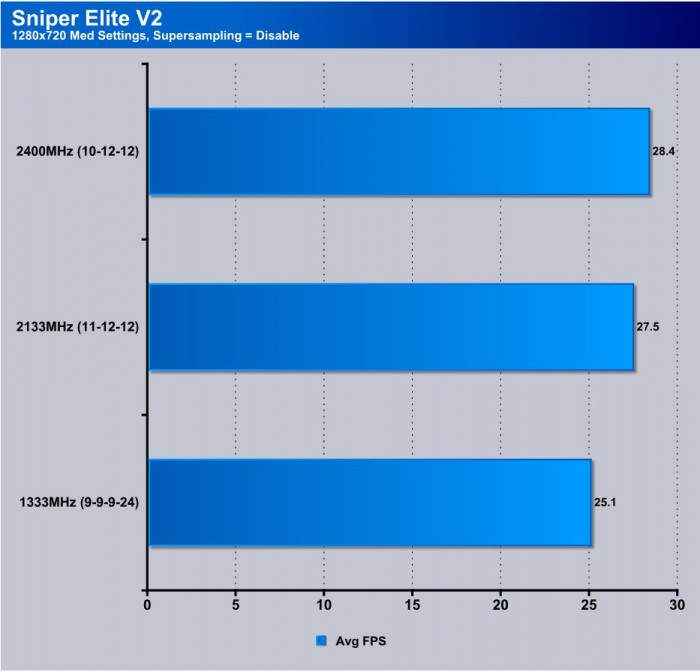 Sniper Elite V2 is a newer game we just recently added to our testing, so we went ahead and threw it in here just to see if it added any performance in real world gameplay. Using the iGPU you can see that once again you get soem nice gains from upping the memory performance since the iGPU uses that system memory as VRAM as well you are technically overclocking your graphics card as well. If you are a gamer using integrated graphics for some more basic gaming I could see this being an advantage to you as you are simply getting free performance with buying higher performance memory.

Patriot has long been a quality brand in terms of its products and now with any luck people will see the true capability of buying quality parts. Yes they may overclock well and all of that but just in general knowing the quality of the build of memory is a huge plus and help to justify the expenditure sometimes even 10-20 bucks or more higher just to know you’re getting a quality built part.

The overclocking side is huge because even if your not shooting for 3GHz you now know you can definitely tweak some nice speed out of these modules at a 24/7 usable scenario and probably at stock timings as well, but if you do happen to love overclocking and benchmarking then do remember they hit 3G on air at CL11, I can only imagine what they can do on cold.

Overall as a basic upgrade for gamers or even some very extreme bench sticks the Patriot “Black Mamba” or their green, red or even blue models of this same build can be found anywhere from local Fry’s to Amazon, NCIX and pretty much anywhere else you can shop try a set out! You will not be disappointed.

Patriot made a quality build with ridiculous overclocking potential at great timings. For this it receives the Bjorn3D Golden Bear Award

Patriot made a quality build with ridiculous overclocking potential at great timings. For this it receives the Bjorn3D Golden Bear Award