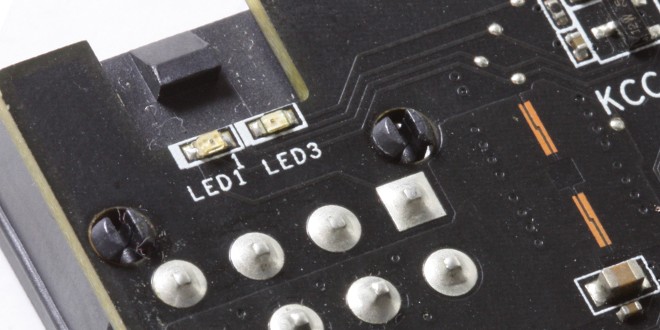 We will use the following applications to benchmark the performance of the ASUS GTX 670 DirectCU II OC Mini video card. 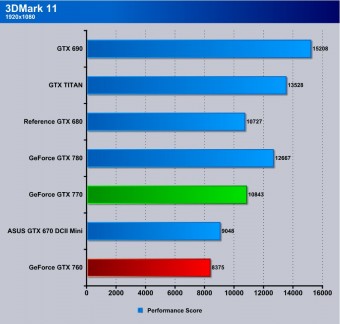 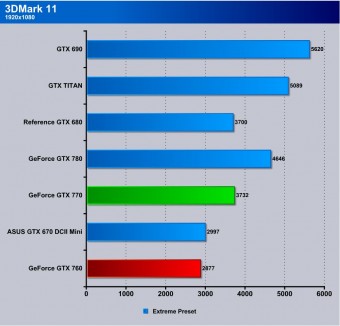 Here you can see in 3DMark 11 the ASUS GTX 670 Mini pulls in right behind the 770 and ahead of the current Gen 760 which is a pretty good result and a bit better than a reference 670 we tested quite some time ago. 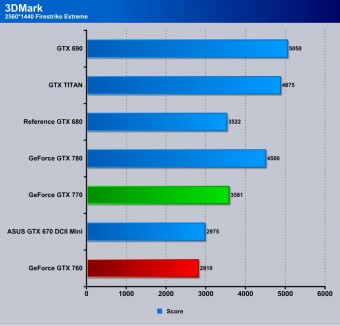 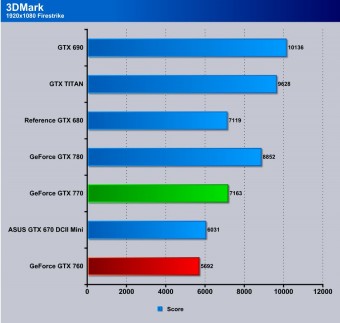 In 3DMark Firestrike and Extreme, the ASUS 670 DirectCU Mini pulls similar here right above the 760 and below the 770 but still a bit higher than a reference 670. This speaks well for the gaming ability of this small card. 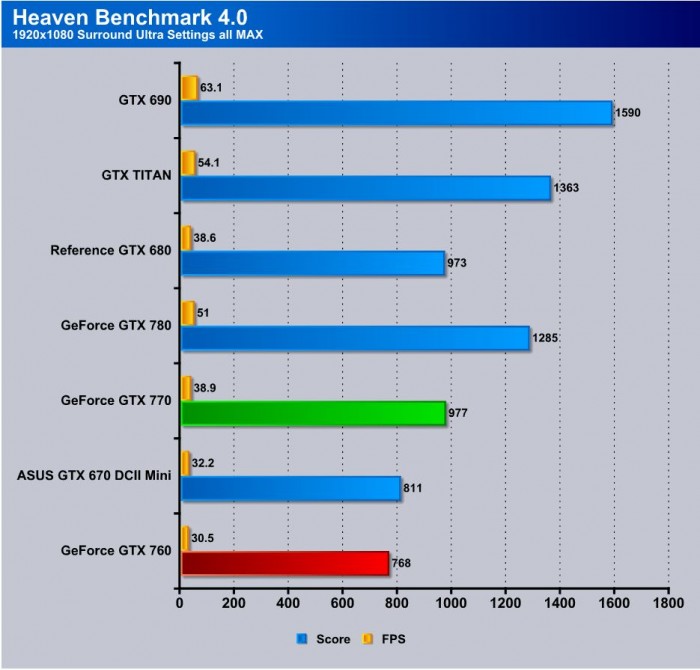 Heaven shows a little about 2FPS over a 760 here and about 6 below a 770 so its about standard for a lightly overclocked 670. 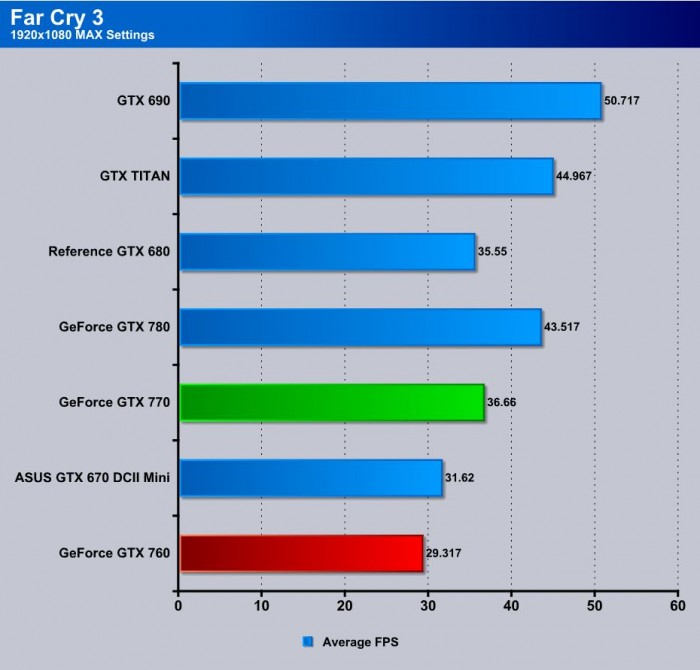 Moving over to Far Cry 3, we used a pre determined path and re-ran each card to monitor average FPS across the complete run. Each run was completed multiple times to ensure continuity and accuracy. Here the ASUS 670 pulls once again about 2FPS over the 760 and about 75 below the 770. 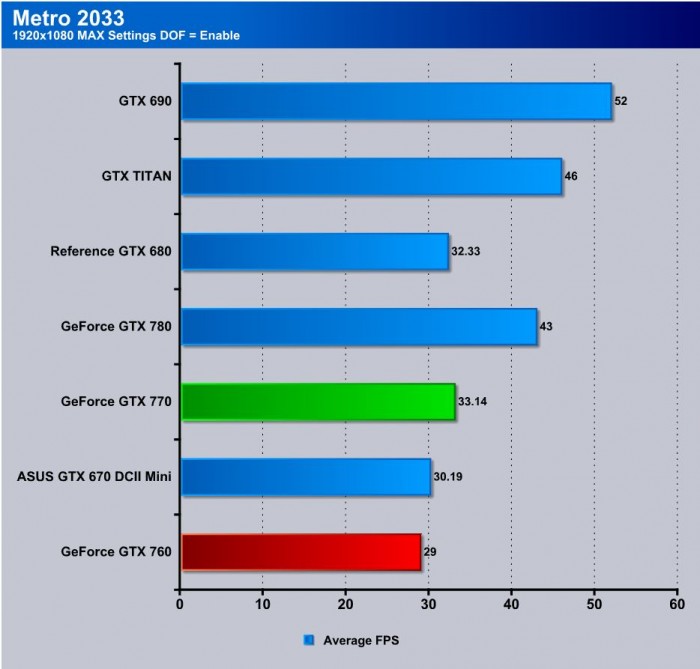 Even after many years, Metro 2033 is still one of the most demanding DX11 video games available to really push the limits of your system. Here the ASUS 670 shows the real abuse of Metro as it scrapes by with a single FPS over the newer 760 but it is still better than the reference 670 and very good performance honestly for teh stress metro puts on the graphics card. 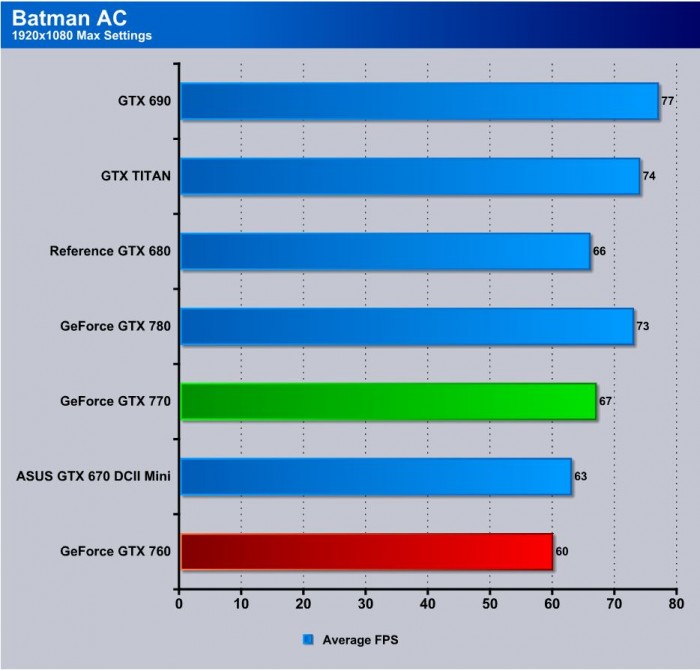 Batman Arkham City is a fun game and utilizes FXAA fully. It is nice to see the full screen anti-aliasing getting picked up by popular titles. When it comes to performance, The ASUS 670 Mini pulls in between the 760 and 770 here and a nice little jump over what we’ve seen from reference clocked 670’s in the past. 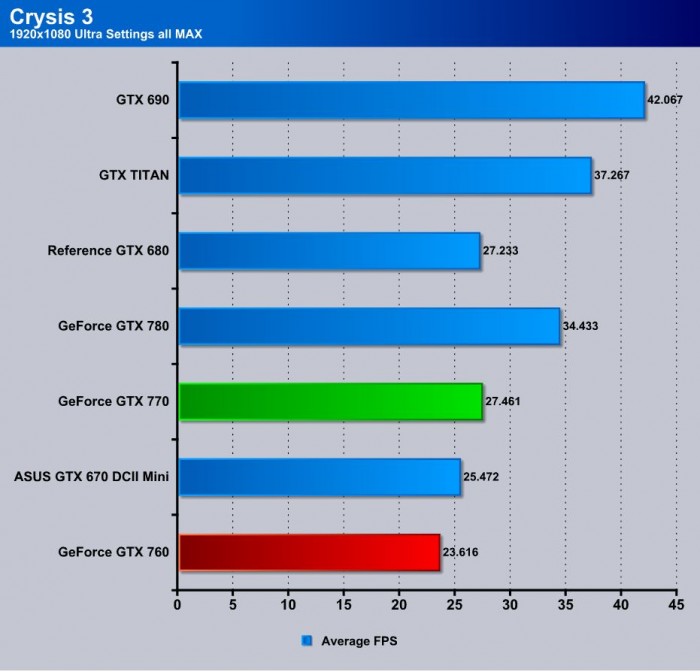 Crysis 3 is much like the original Crysis in that playing it at max settings is painful for even the highest end hardware. Once again the ASUS 670 Mini pulls in right in between the 760 and 770. 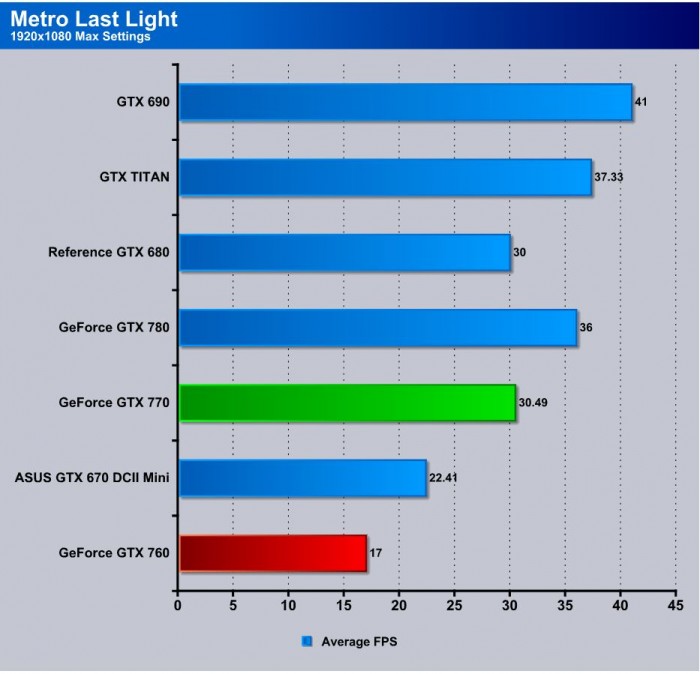 Here we have Metro Last Light which is a brand new game added to our testing platform as it just came out. If you thought Metro 2033 was stressful, you have seen nothing yet. The particles and lighting, as well as the PhysX effects all add up to an amazing looking game that can put a stun even the most powerful system in its tracks. Here the ASUS 670 Mini pulls quite good performance over the newer 760 as it pulls 5 FPS lead. This is huge in the fact that Last Light is even more stressful than Metro 2033 and to see such a large difference shows that this card is packing some major punch. 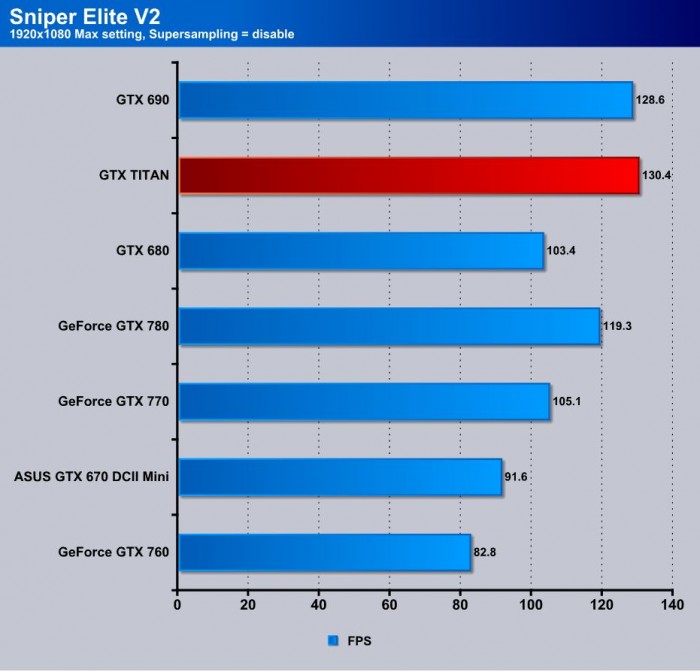 Sniper Elite V2 is a fun game which, when first released, was quite stressful but still playable on most higher end cards. By now, most cards have surpassed it, and most of the cards now easily break the 60FPS super smooth average. The ASUS 670 mini pulls over 90 which means no matter what it simply will be playing smoothly. 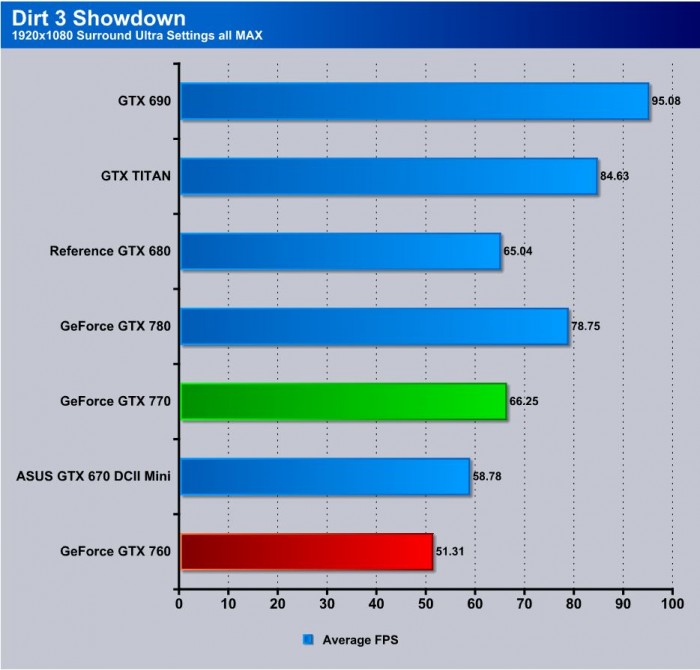 Dirt 3 Showdown is a visually beautiful game with excellent lighting and overall motion blurring creating a real visual spectacle of a game. The ASUS 670 Mini pulls just under 60FPS average so figure gameplay will be nice and smooth with no or minimal stutter. 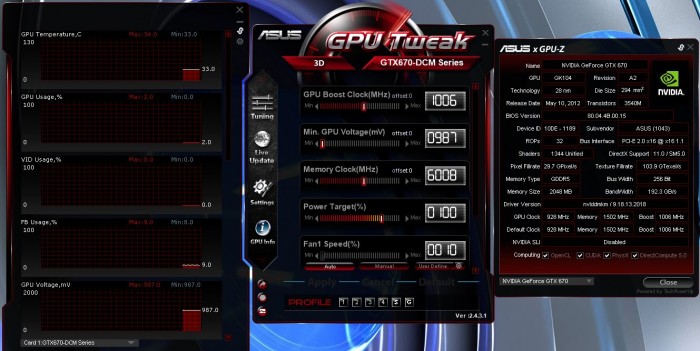 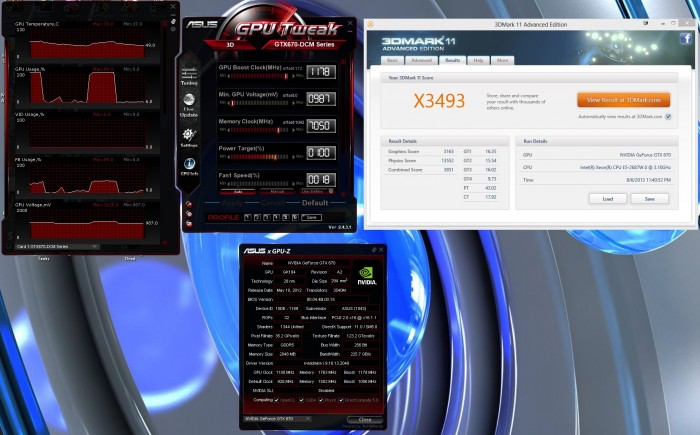 The ASUS GTX 670 DirectCU Mini cranked right up when requested and we were ble to pull it from a base clock of 928MHz to 1100MHz which translated to an effective boost clock of over 1250MHz on the GPU. This is an increase of over 16 percent on the base clock of the GPU and not bad whatsoever when you consider this was attained while reaching a maximum loaded temperature of only 70C peaks.

Memory ran quite well moving from the 6GHz mark up and beyond 7GHz to a final stable speed of 7052MHz on the memory which really opened up the pipeline for some great GPU performance as you can see by the 3DMark 11 score shown above.

To measure the temperature of the video card, we used ASUS GPU Tweak (Validated with EVGA Precision X) and ran Heaven Benchmark in a loop to find the Load temperatures for the video cards. The highest temperature was recorded. After looping for 10 minutes, Heaven was turned off and we let the computer sit at the desktop for another 10 minutes before we measured the idle temperatures.

The DirectCU Mini cooling solution while being a radial design did handle temps quite well with its integrated vapor chamber. The fact that we found the limit of the GPU while barely seeing peaks of 70C tells me that in a standard gaming rig or even a cramped mini ITX or mATX build this card will really be up to the task of knocking out some awesome gameplay. 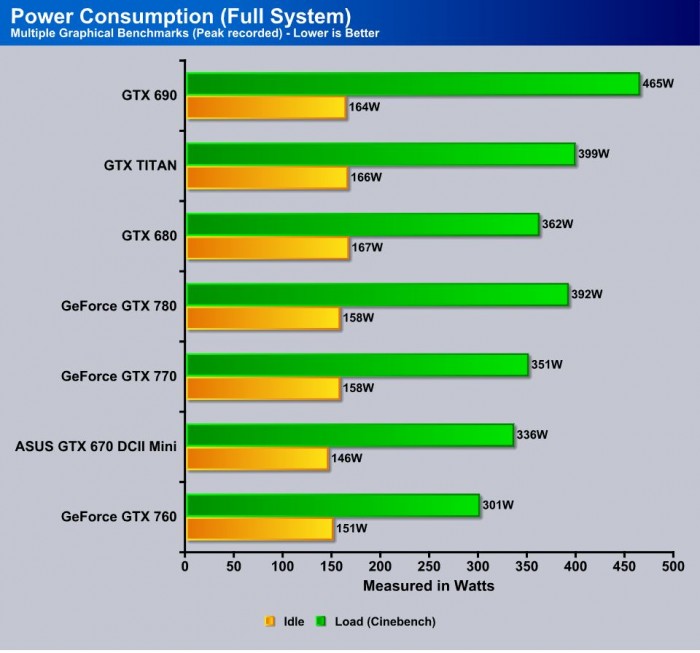 Here we observed that the ASUS GTX 670 DirectCU Mini pulled very low power at idle even lower than the reference 760. Under load it pulled a bit more but was below the 770 model. Overall this means when browsing and light load the power consumption of your rig would be lower for even a lower power bill.