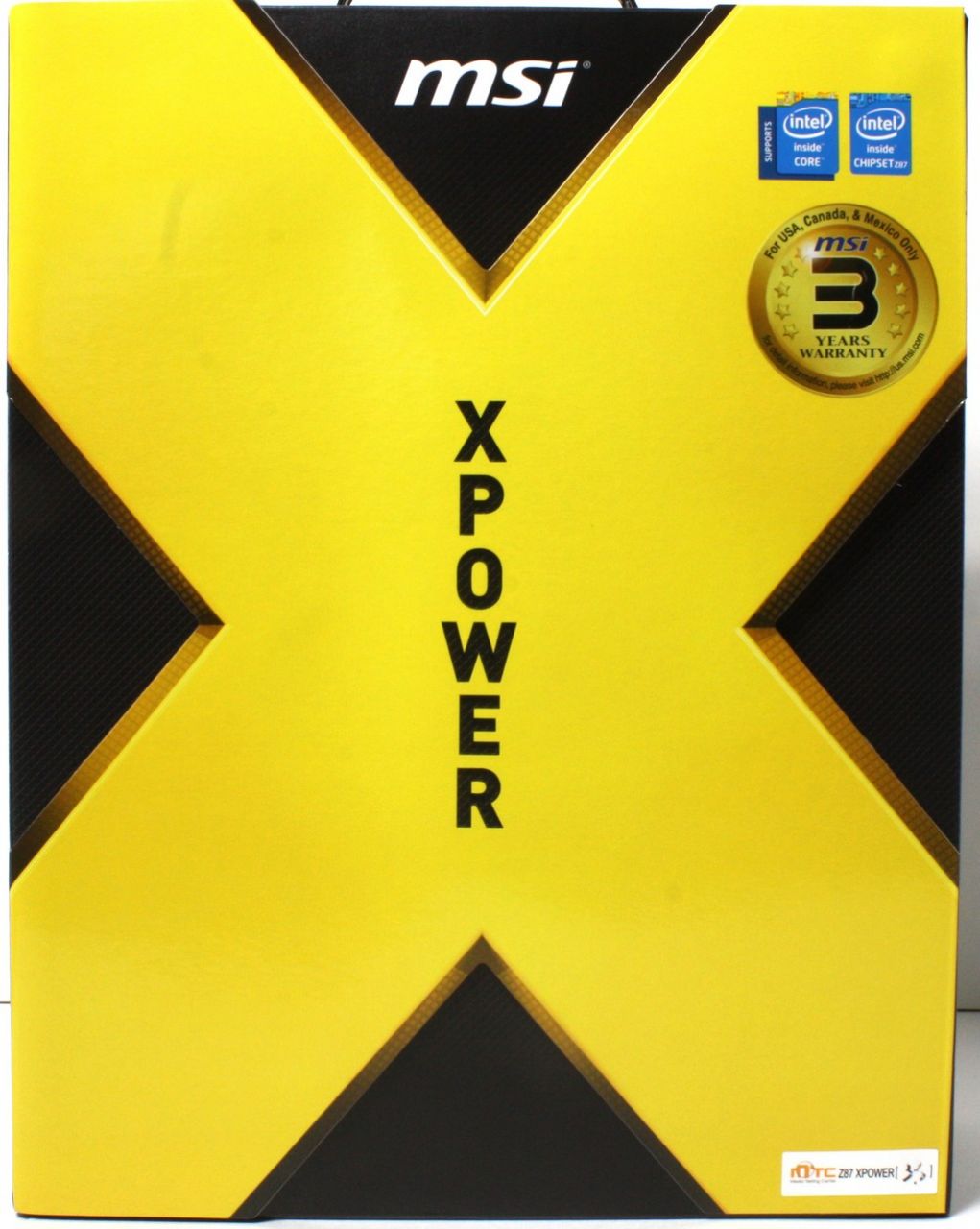 MSI just jumped into the extreme Haswell game with the recent release of the Z87 Xpower, today we have one in hand, so let’s see what this beast has to offer.

MSI hit the Z87 scene quick and with some excellent options from the Gaming line to the Mpower lineup. Now we have the Xpower model which for anyone who has followed MSI boards knows that this is their flagship model and is one you should take seriously. The Xpower brand has a long history of overclocking enhancements and tweaks which are designed by panels of overclockers who provide feedback to MSI to ensure that what comes out is an overclockers dream.

Seeing how previous Xpower boards have fared we have no doubt this board is designed to impress and just the styling alone makes the board quite menacing with the matte PCB and equally dark heatsinks. 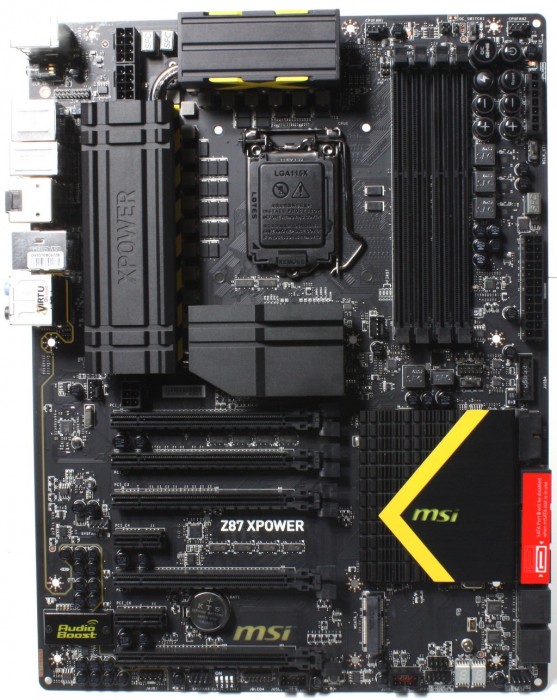 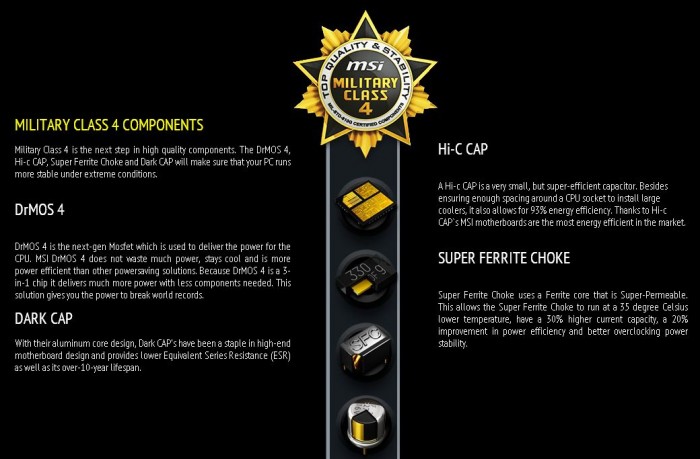 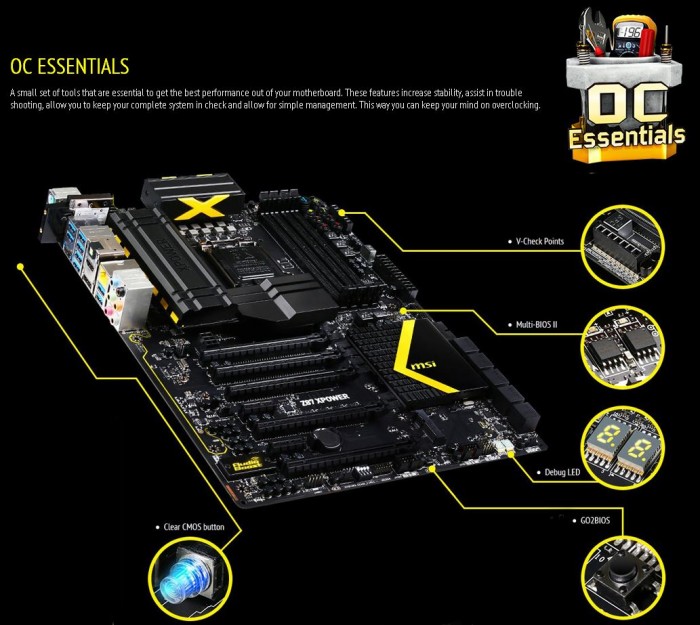 This is what we were talking about as MSI has been building Mpower and Xpower boards for some time so adopting many of these features onto the board came naturally and easily. 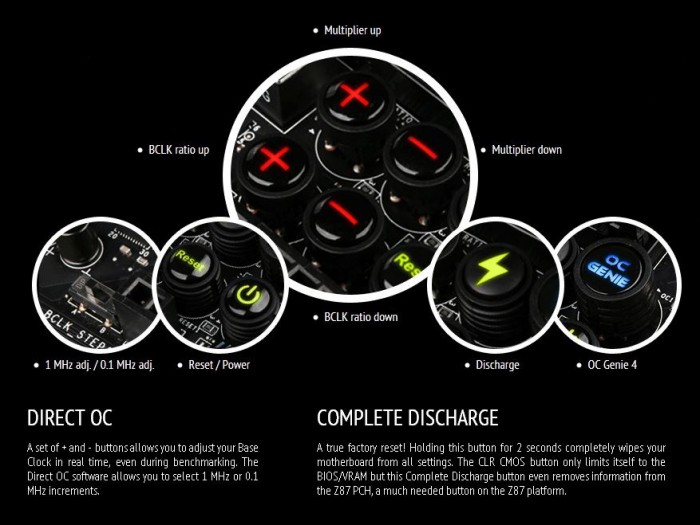 OC Genie has been around for awhile and is basically a quick easy to set overclock that is a one touch solution. Its an easy way for a gamer to get a free performance boost from their system.

The Xpower board offers a bit more than just the standard buttons with the full gamut of adjustability from +/- buttons for BCLK and CPU ratio adjustments along with the ability to even change the BCLK from 1MHz to 0.1MHz scaling for even more granularity when pushing for the very last little bit from the platform.

The Discharge button is a pretty awesome feature. It’s like the ultimate BIOS clear, as it clears not just the BIOS settings but even the training and everything from the memory of the board to an even deeper level. Those who bench will know that when a board starts going wonky sometimes you have to remove battery for a minute or two, which clears the board. This switch manages the same effect in just a few seconds so that is one really cool option as this board is mainly designed for those super-high end enthusiasts who will likely use this board at the edge of its stability. 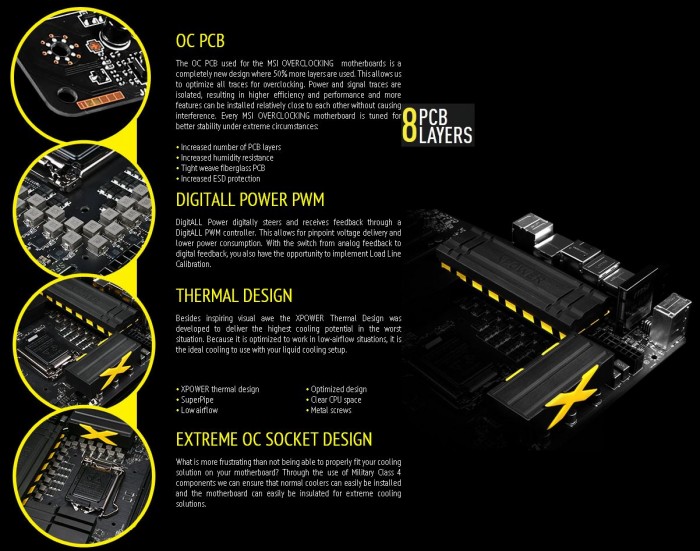 The OC PCB consists of 50% more PCB material which allows for more trace isolation for tighter component fitment while reducing the risk of interference from an adjacent component. Also having a thicker PCB allows for larger power and signaling traces which means cleaner operation and more power available for when you’re really pushing hardware.

Digitall power design is the use of full digital designs for the VRM which means super precise voltage regulation along with better Vdroop control for extreme situations.

The thermal design for the Xpower was made for the enthusiasts as many will run liquid cooling which means very little airflow near the CPU socket area. Therefore MSI took the initiative to optimize the cooling design to allow thermal evacuation from the VRM area even with little to no airflow.

The Extreme OC socket design utilizes many surface mount and low profile components so that when insulating for sub ambient cooling it is easy and doesn’t require hand yoga to figure out how to insulate around tall barrel caps.

MSI is proud to tout the Xpower’s ability to hit over 3GHz on the memory frequency. Keep in mind that with Haswell these frequencies are possible but you will still need DIMMs which can pull that off. We quickly found that CFR based sticks did not like to move a lot but MFR based sticks clock much more willingly on Haswell based systems.

Also other lower speed memory will work and may even clock to much higher due to the strength and awesome capabilities of the Haswell IMC but just remember every DIMM has its limits and some simply won’t go very high. 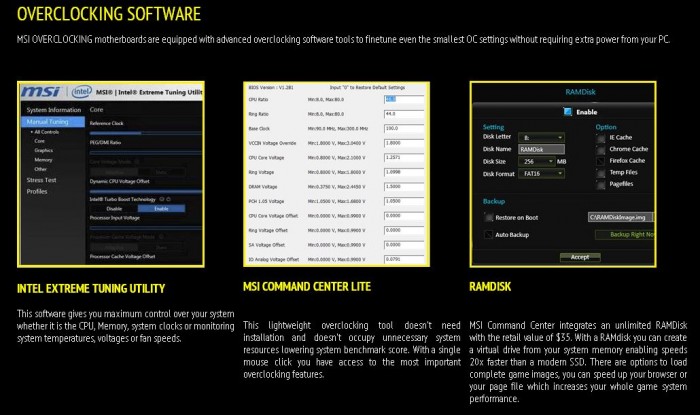 MSI really put some time into selecting software and optimizing it for optimum overclocking performance.

Intel Extreme Utility – MSI likes the Intel designed utility which is designed to work well with the board so its not a bad place to be and MSI adopted it into its arsenal. This tool can be used for full board control and monitoring for adjusting the clockspeeds and voltages from directly within the OS.

MSI Command Center Lite – MSI has its always popular command center but with the command center lite you get a tool that is very low resource usage and fast loading to allow adjustments from within the OS without the resource usage or even installation you normally have with the normal control utilities. This is excellently useful for those who are benching at the edge of stability and need to make a quick adjustment without crashing.

MSI RAMDisk – MSI integrated a RAMDisk software within its software suite which allows for using excess RAM as a super high speed storage volume. This is great in itself as some RAMDisk software can cost upwards of $30+ and may not have the same feature set. One thing we do like is that there are specific check boxes for enabling the RAMDisk to handle the Pagefile or browser cache files which means everything will actually load a lot more quickly. Also there is no size limit on this software so if you have a 32GB kit of memory in your system you can easily use a large chunk of that to make a storage system which can transfer at speeds up to 10GB/s. The RAMDisk will dump and image file to disk when shutting down and load it when starting up so you want to expect some delays during startup and shutdown to save or load the image especially if using a much larger RAMDisk. 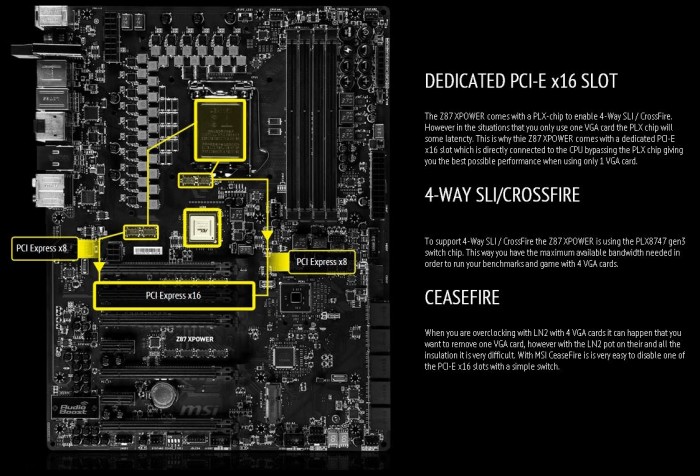 MSI wants to ensure optimal performance possible with the Xpower and with that they have a single slot with dedicated full x16 PCIe 3.0 lanes in the case that you use a single card setup, however in the case that you use more than one card then the lanes are distributed through the PLX Bridge which allows for enough bandwidth/lanes available for multi GPU or 4Way setups.

This is an interesting implementation although we would like to see the top slot getting full native PCIe so that not every lane is going through the PLX Bridge as that causes some latency. 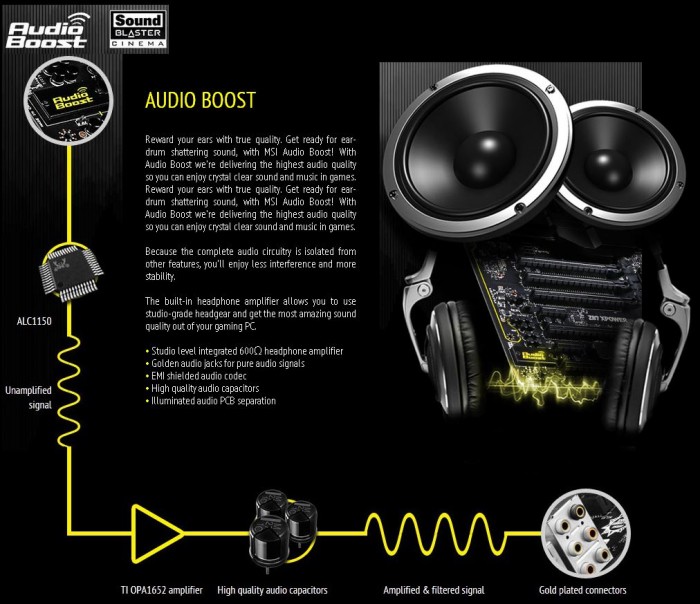 One of the key features for a gaming board has to be audio as it is what gives you the experience the most besides graphics. Well for this MSI put a lit cover over the audio codec which is a Realtek ALC1150 model. This is a very nice quality unit–even the audio ports are gold plated to allow for maximum clean signal contact and optimum audio quality. After the codec you get a high performance amplifier which ensures a nice powerful audio signal which makes its way to the high quality audio Caps and to the terminating end on the audio panel at the rear. Overall this makes for a excellent audible experience especially for those with tuned gaming audio headsets since the amplifier will really make them come to life. 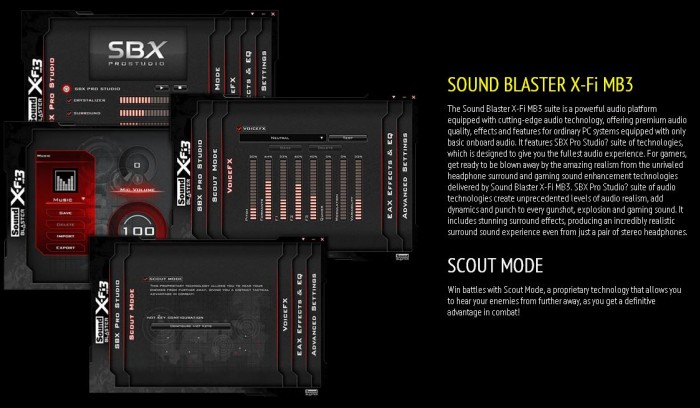 With the Xpower board there is also X-Fi software designed to enhance the audio performance even further. This is like an Equalizer on steroids as there are room effect settings, audio enhancements along with pro studio enhancements to allow for even better audio quality and clarity.

With the software there is also a option called “Scout Mode” which allows for more precise long range hearing. This may allow you a edge in gaming as you may be able to hear your enemy from even farther away. 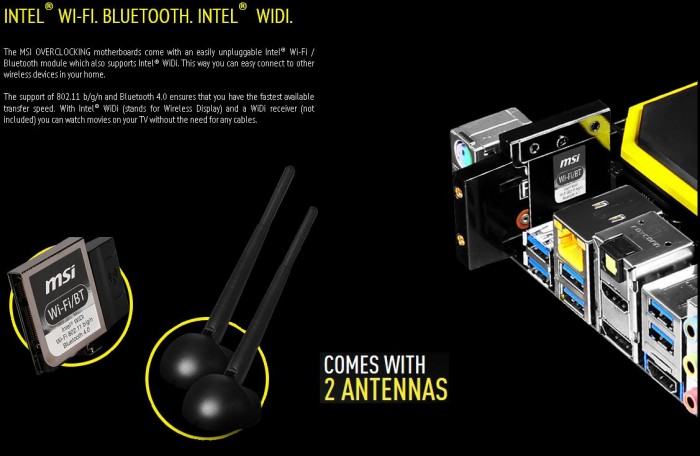 Intel integrated WiFi ports are included via an add on module along with two supplied antennae. This supports full Wireless N along with Intel WiDi support which allows connectivity to a WiDi enabled display or a display with a WiDi Reciever connected to it. WiDi allows wireless connectivity through the WiFi Module to a remote display which means for a media center or even just very clean desktop setup this can be an awesome feature for you depending upon the usage.

We would have liked to have seen Wireless AC as it is the new high end standard and it does not show up here. Other than that this implementation is exactly what it should be and will definitely get the job done for you. 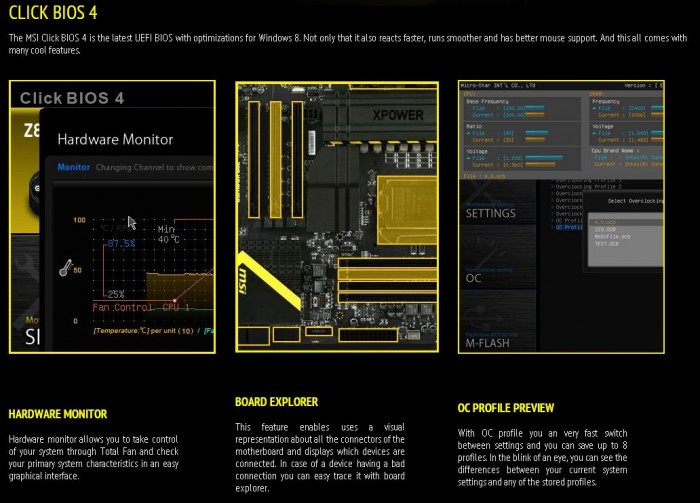 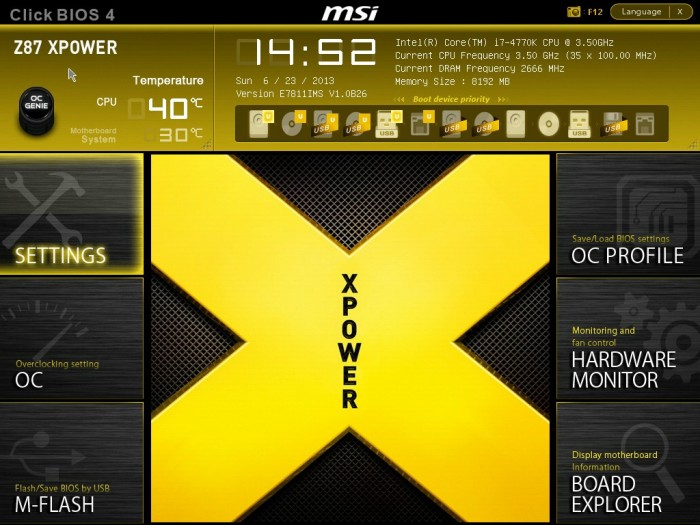 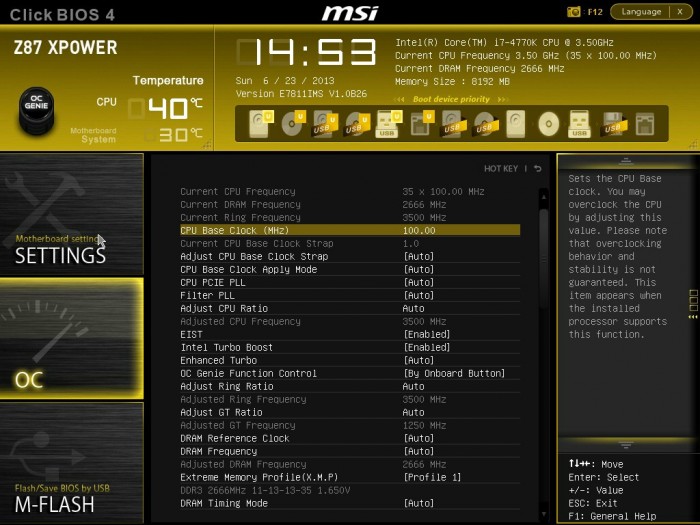 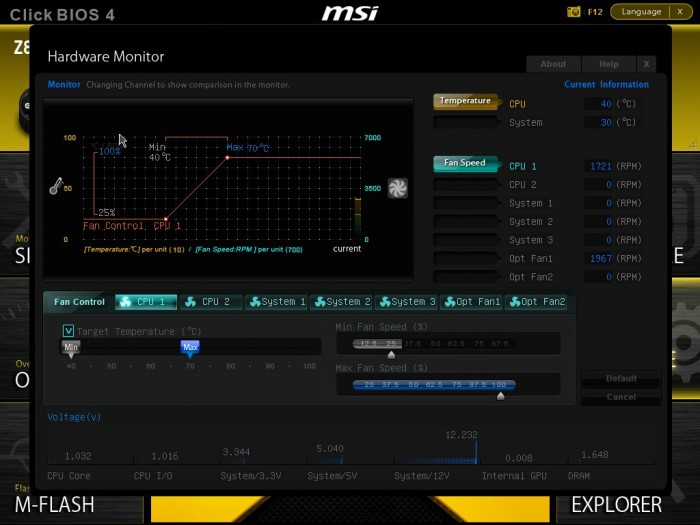 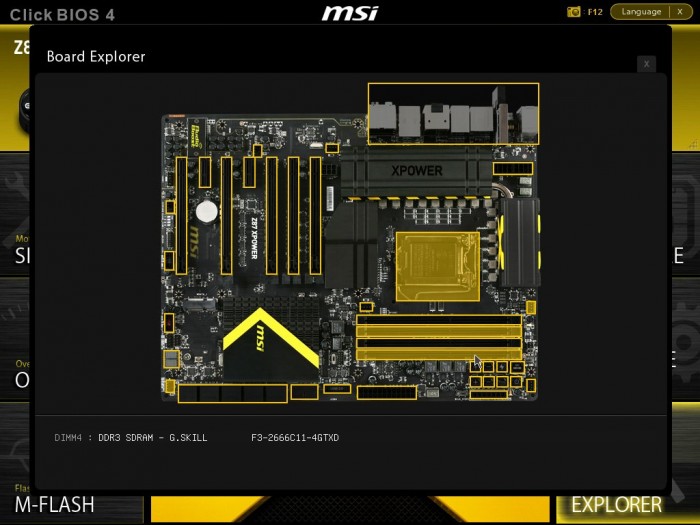 Here you can see the new BIOS looks very nice, and the yellow theme actually plays quite well. The settings are all easy to locate within main and sub menus. the Fan control allows for full fan ramping control based from temperature references or even manual fan controls. Also the board explorer feature is really nice as it allows you to see not just what is populated on the board but even device ID’s for what is installed as you see the DIMM information including exact model number here.

The MSI Gaming board is exploding with features such as.

The MSI Z87 Xpower has performance potential to top the charts, albeit at a price premium. For its excellent performance, it earns the Bjorn3D Golden Bear Award.

The MSI Z87 Xpower has performance potential to top the charts, albeit at a price premium. For its excellent performance, it earns the Bjorn3D Golden Bear Award.