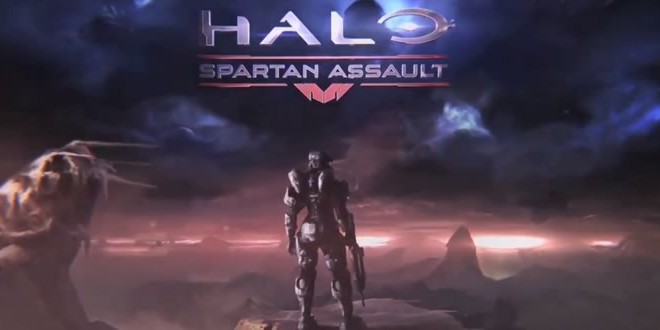 Halo is one of those games that will be talked about for many years. Not only did it in many ways help make the first Xbox a success, it also was the game that at least for me proved that you can play a first person shooter (FPS) on a console with a controller. Bungie got it right and paved the way for more FPS on consoles. Ever since the first game was released Microsoft, Bungie and now 363 Studios have been busy releasing new games in the Halo universe and it was of course just a matter of time before they got to the mobile platforms. Halo: Spartan Assault is a game that at first glance does not look like the Halo we know and love but which turns out is a game you just do not want to miss.

Not a first person shooter

Halo: Spartan Assault is actually not a first person shooter, instead it is a top down shooter. The game is a “simulation” aimed at Spartans where you get to relive past missions so that you can learn from the tactical decisions, good and bad, that were made. This backstory allows the game to serve the missions one by one while discuss what happened between them and then allow you to “relive” each mission and get as good score as possible.

Currently the game comes with 25 missions and depicts the big battle of battle of Draetheus V where Coventant forces attacked the planet and the moon to get hold of a big magnetic reactor. We get to relive the battle from the eyes of Spartan Sarah Palmer (who turns up in later games as a senior UNSC Commander) and Spartan Davies.

What the heck is a Spartan?

One of the cool things with the Halo universe is that since there has been so many Halo-games now in addition to a lot of Halo-novels there is a lot of information and lore around what has happened in the universe. When you played the first Halo-game it felt like the Spartans were those invincible super-humans but over time other games and novels have fleshed out their story and given us a much better idea what the Spartans really are.

The SPARTAN Programs are a series of UNSC projects designed to create generations of physically, genetically, technologically, and mentally superior “supersoldiers” as a special fighting force within the UNSC Military. From Halo Wikia.

Without going to much into details there are 4 Spartan programs. Spartan I used volunteers from the military and augmented their abilities creating a kind of supersoldiers. The second and third Spartan programs used infants instead and were pretty cruel programs, especially Spartan III where they were created basically to fight hopeless fights and die. Spartan IV, the program that Spartan Palmer and Spartan Davies is part of is again a program where adult soldiers volunteer. 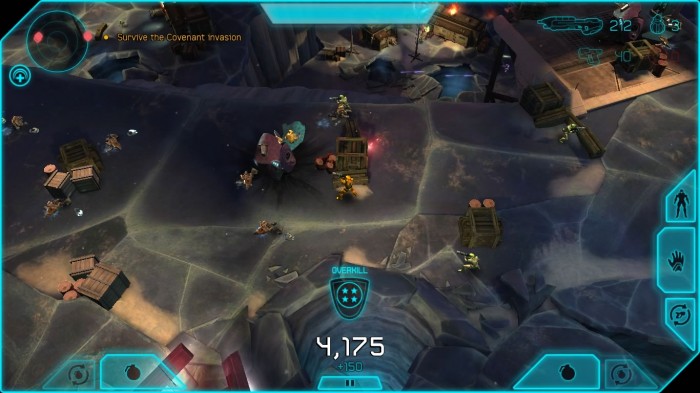 What this means though for the game is that the Spartan you command can soak up a lot of damage and is a one man army.

As mentioned before this is not a first person shooter, instead it is a top down shooter just like Gun bros or the classic arcade shooter Robotron. You control a Spartan and see hem/her from a isometric perspective run around and shoot stuff. 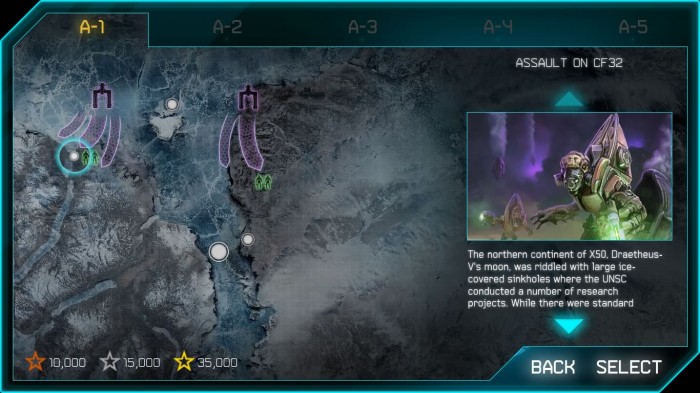 The game is split up in 5 stages which each has 5 missions in it which gives us a total of 25 missions. Each mission takes maybe 2-5 minutes to clear making it perfect for bit-sized gaming sessions while on the go. 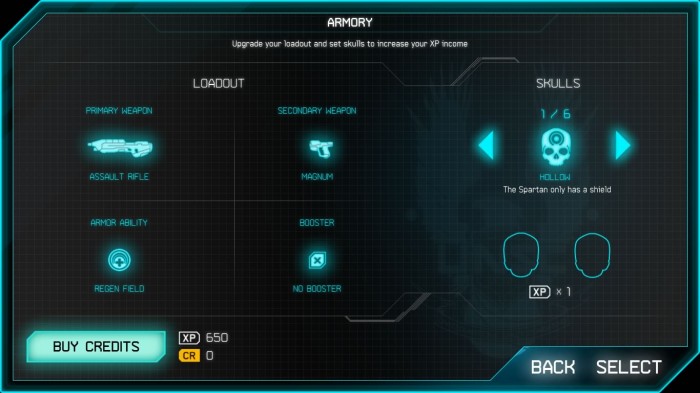 Before each missions we get to choose the load-out as well as armor ability, a booser plus increase the difficulty by adding “skulls”. Skulles basically changes some of the parameters of the missions. It can for example make your shield only regenerate when you use a melee attack or deplete your shield every time you fire. The idea is that by adding the “skulls” and making a mission harder you also get the chance to earn more experience points.

The primary weapon for each mission changes and for example in a few  missions you get to dual-wield SMGs. You can also “buy” access to a few other weapons each mission including the spartan laser and a rocket launcher. Armor ability ranges from creating a hologram to fool the enemy to get an extra speed boost or even have a small quad-copter that explodes after a while. In the booster category we basically only have to choose from getting more experience points per kill or getting more regular points per kill. 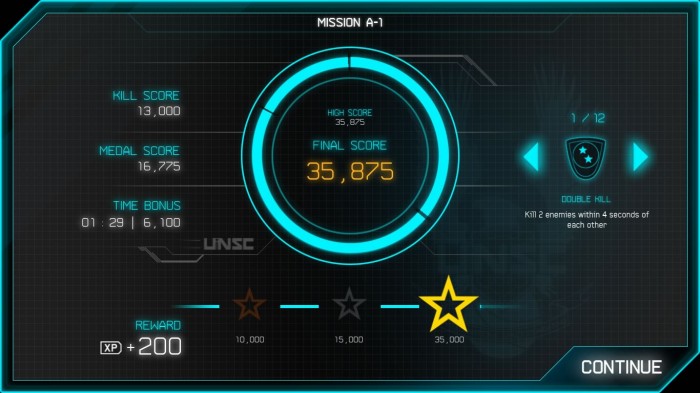 After each mission you get rated on how well you managed the mission. There is also 40 achievements that you can collect in the game and all the experience points and the achievements will be added to your Spartan Career which is useful if you use Halo Waypoint or the Halo 4 Spartan Career.

One cool feature is that your gaming progress is saved “in the cloud” meaning that you can jump between devices easily and just continue play. So if you for example played during your commute on a Verizon Lumia 928 then you can keep playing on a Windows 8 RT tablet when you get home or even switch to your gaming PC with Windows 8.

Since we reviewed this game on a Surface Windows 8 RT tablet we cannot comment much about how it plays on a Windows 8 Phone although from the sounds of it should be pretty similar.

On a Windows 8 RT or a WIndows 8 machine you can currently control the game either through virtual gamepads on the screen or my mouse/keyboard. Support for the Xbox 360 gamepad is supposed to come soon too. Our choice of controller would be the Xbox 360 controller but since that did not work yet we selected to play in the sofa with the on screen controls.

The on-screen controls work really well. The left side of the screen controls the movement of the Spartan while the right side of the screen aims where you are shooting at. When you drive a vehicle the controls are similar although the right pad also helps you turn the vehicle. After playing 13 missions in a row for over 2 hours I must say the controls feel extremely well done. The only thing that takes a bit getting used to is throwing grenades where you have to make sure to turn your Spartan to the right direction before throwing them. Steering the vehicles also is a bit tricky as the left stick controls the direction while the right stick controls where the vehicles is pointing, where the turret is pointing as well as fire the machine gun. 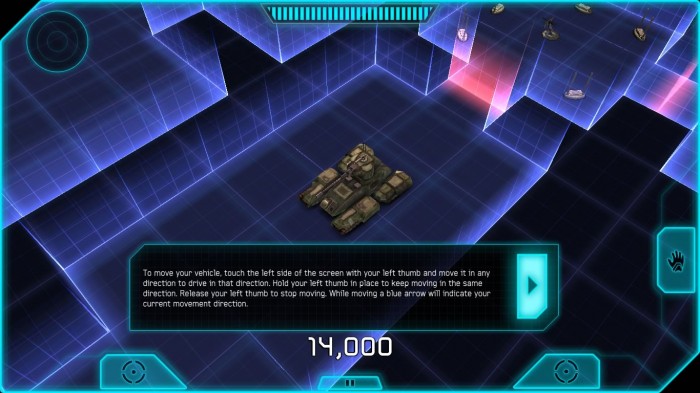 This is a game that looks very good, especially on a big tablet like the Surface. While the area where you play is quite small you often see other ares close by with lots of units in giving you the feel of being part of something bigger.

We tried it both on a Surface RT and a Surface Pro and regardless of the difference in hardware the game ran great on both.

On the audio-side we do not really have any complaints. we get the atmospheric “Halo”-esque music in the menus while the actually action has all sorts of explosions and gun-fire sounds that sound great in headphones. There is a lot of voices in the game too, both from your companion marines and the enemy covenants and if you have played a regular Halo-game you will recognize some of them.

Those of you paying attention noticed that it says “Buy Credits” in one of the earlier screenshots in the review. Yes, it is true. Even though the game cost $6.99 there is IAP inside the game. While you do earn experience points you do not earn any credits and you need those for some of the extra weapons or boosts that you can buy. 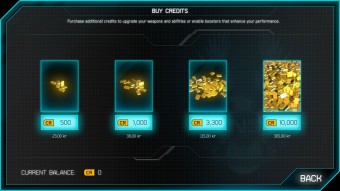 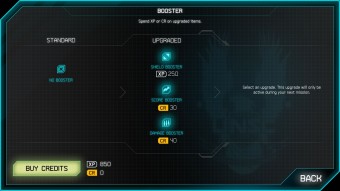 Anything you buy is only valid for the missions you bought it for. This means that even if you buy 1000 credits and the score boost costs 30 credits per mission, if you fail missions and want to replay it you always have to buy the boost/weapon/etc. over and over again and at some point you might run out.

Luckily the IAP are not really needed. True, you can get a Spartan Laser or a rocket launcher for each missions as well as some extra boosts but the simple fact is that 99% of the time you get by with your trusted regular gun and then pick up any guns you need on the battlefield. Using either the experience or score boost does help you earn stars and experience a bit quicker for each missions but it really is not needed to complete the game.

We have recorded a video of gameplay which should give you an idea of how the game looks and works.  The video was recorded via the software Camtasia on a Microsoft Surface Pro tablet. The gameplay and graphics are fully comparable on the Surface RT.

Halo: Spartan Assault is a really good game and a game that should have been out with the Surface RT and the Surface Pro when they were released. While it might not have been a system seller it still would have shown that the platform is capable of a lot more than just simpler games. The game is pretty short and should be able to be played through in 4-5 hours. This is reflected on the price though. There is some replayability as you can increase the difficulty as well as aim for higher scores but we would have liked to see even more missions and maybe a bit more depth.

At the time of writing the game is exclusive to Verizon and the Lumia 928 in the US but depending on when you are reading this it might be available on more carriers and phones. International users as well as Windows 8 RT and Windows 8 users can already buy the game.

Halo: Spartan Assault is a really good game that shows us that it is possible to create impressive games in the Windows 8 UI. Even though it is a top-down shooter it retains a lot of the "Halo"-feel and it does not feel out of place in the Halo-universe.

Halo: Spartan Assault is a really good game that shows us that it is possible to create impressive games in the Windows 8 UI. Even though it is a top-down shooter it retains a lot of the "Halo"-feel and it does not feel out of place in the Halo-universe.