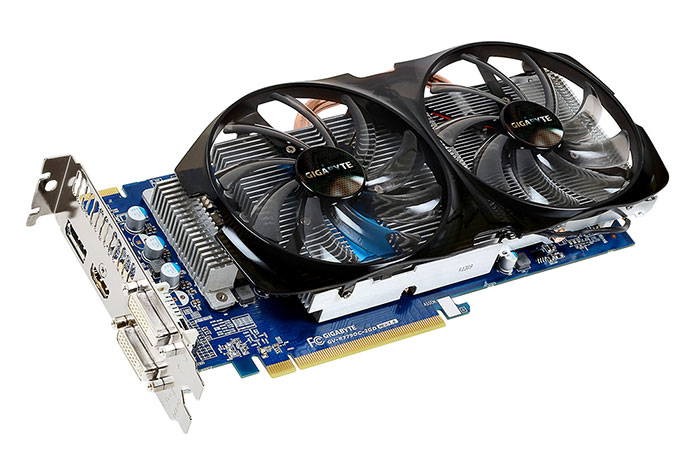 When AMD launched the HD 7790, we are a bit  to see that the reference card only comes with 1GB of memory since we feel that midrange GPU at 150 should all come with 2GB onboard memory as a standard Luckily, manufacturers are quick to respond and they quickly have launched 2GB version to the market. We have previously reviewed the Sapphire’s card and today we are going to take a look at Gigabyte’s take on the HD 7790 with the GV-R779OC02GD. 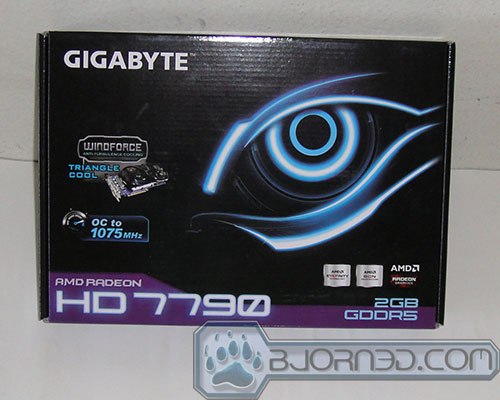 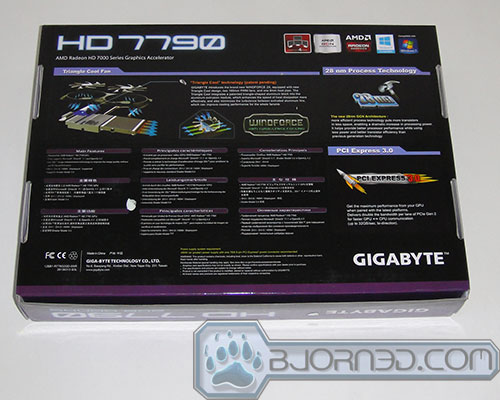 The Gigabyte HD 7790 arrived in a black and purple cardboard box. On the front, we can see it highlights some features of the card such as OC to 1075MHz and the WINDFORCE cooler. More information about the card’s Triangle Cool Fan can be found on the rear of the box. 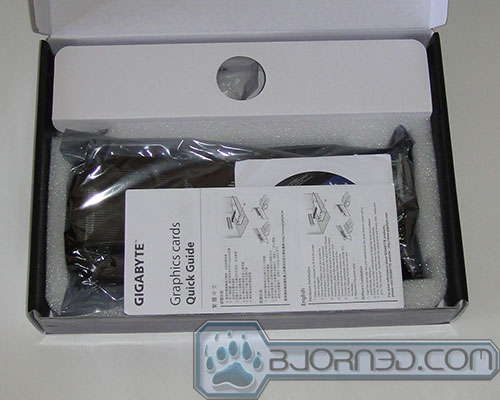 Inside, we can see the card is placed in an antistatic bag and being protected by plastic foam to prevent any damages from shipping. The accessories are placed in a separate compartment. 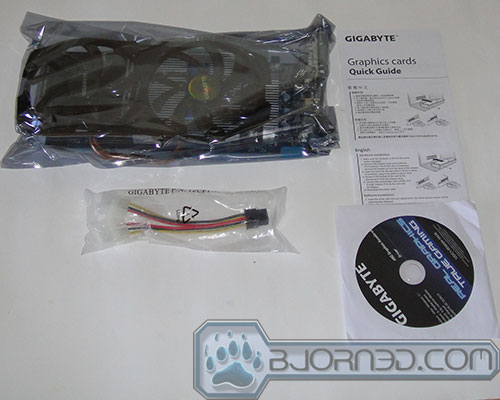 The included bundle is pretty scarce where we get a quick guide, the drive CD, and a molex to PCIE power adapter. Luckily AMD has extended their Never Settle Reloaded to the HD 7790 where you can get Far Cry 3 Blood and Dragon and BioShock Infinite for free. Not terrible bad considering the card is retailed at $150. For more information, check out AMD’s own website on how to claim the code. For the lack of the bundle, Gigabyte makes up with a generous 3 year warranty. 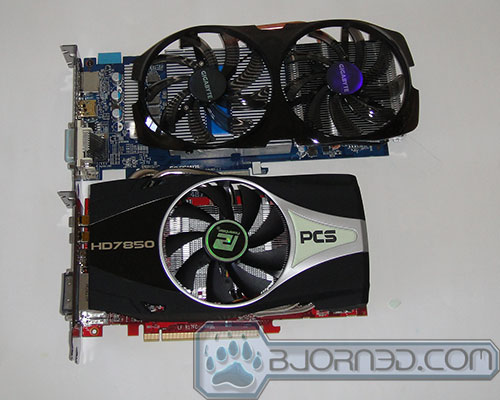 The first glance on the Gigabyte HD 7790 card and we can see that the card is a major departure from the reference HD 7790. The card is incredibly long for a mainstream card. Compare to the reference card’s 8.5 inch in length, the Gigabyte’s card PCB is 10 inch in length and the cooler extends the card to 10.5 inches in length. In fact, the card extends over the width of a standard ATX motherboard. We are not sure the reason behind Gigabyte’s decision of using such a long PCB but we think it is probably due to the fact that Gigabyte wants to continue to offer better cooling with their own branded WindForce cooler. However, considering the fact that the HD 7790 is geared toward mainstream gamers who may not always go for a large case with most expansion slots and the current trend of moving toward smaller and more compact system, we wonder if Gigabyte’s decision of making the HD 7790 so long would hurt it sales. Nonetheless, the card should not have any issue with standard ATX case. 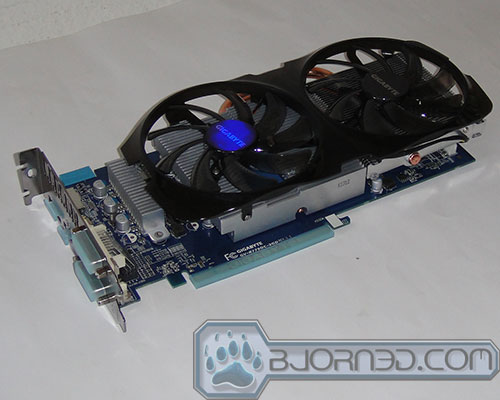 Speaking of the WINDFORCE cooler, the HD 7790 comes with the GIGABYTE’s WINDFORCE 2X 100mm fansink with the Triangle Cool” technology. The cooler is designed with the triangle-shaped aluminum block into the aluminum extrusion module. This is designed to help streamlining the cool air pulled from the fan toward the aluminum fins. The result is that heat can be dissipated more effectively and the turbulence between the aluminum cooling fins can be reduced. 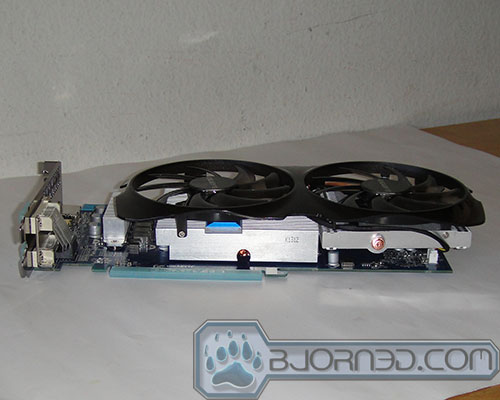 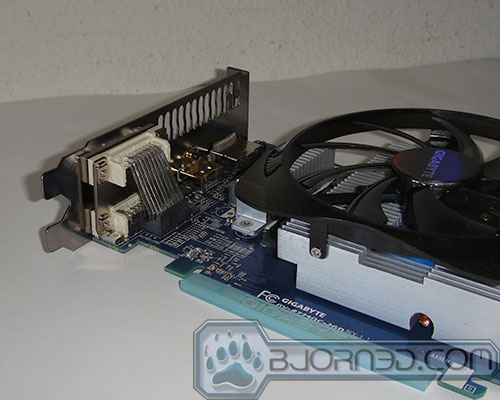 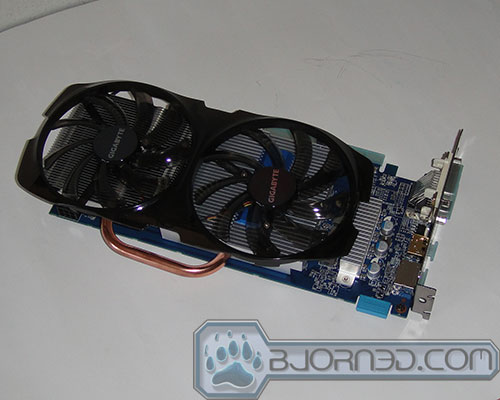 The card is being powered by 5+1 phase power design with solid capacitors. Gigabyte placed a small heatsink on top of the PWM and the cold air pulled from the fan are directed to pass through the heatsink to help with heat dissipation. Using Gigabyte’ Ultra Durable technology, the card uses low RDS MOSFET, Ferrite Core Choke, and all solid capacitor for lower power loss, cooler operation, and longer component life span. 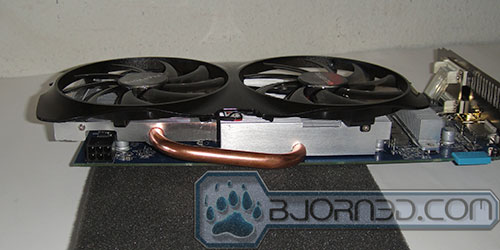 On the top of the card, we got the 6-pin PCIE power connector and the CrossFire connector. The HD 7790’s maximum TDP is only 10 watts higher than the PCI Express connector’s 75W so it is not going to need that beefy power supply to run the card. However, the card’s minimum requirement is 450W according to Gigabyte’s website but it is very likely that you would still able to run the card with a bit lower wattage PSU provided that it is from a reputable brand with plenty of amperage on the +12v. Graphic cards draw most power from the +12V, it is the most critical rail to check. 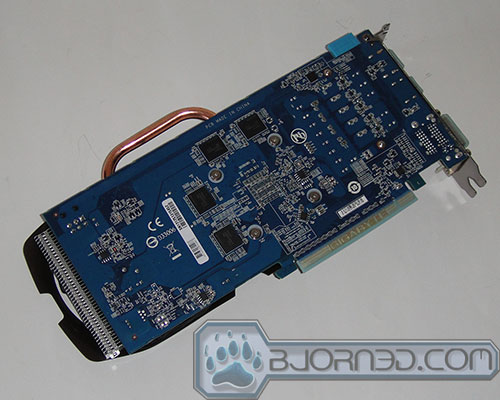 The HD 7790 is packed with 2GB of 128-bit GDDR5 memory. Four memory modules of 250MB (H5GQ2H24AFR-ROC) are on the front of the card and four more are located on the rear. The memory operates at 1.5V. Thee front four memory modules are being cooled by the WINDFORCE cooler while the four on the rear are not. 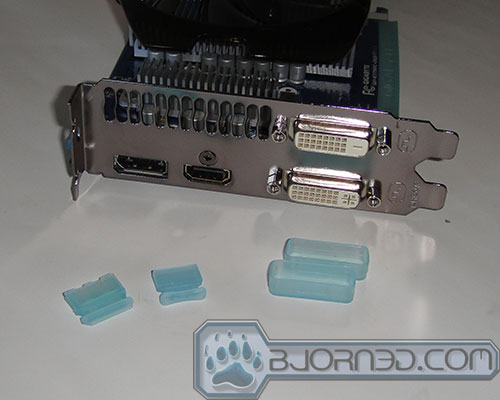 On the back, we got two dual-link DVI connectors (a DVI-D and a DVI-I), an HDMI, and a full size DisplayPort 1.2. The mixture of the port are identical to the reference design, down to the stacked DVI ports. Like any HD 7790, the card will support AMD’s Eyefinity technology where it can power up to six displays through a DisplayPort MST hubs. Without the hub, the card will power three displays simultaneously. The included HDMI port will support 4K displays for future proof. The HDMI port also supports protected high bit rate 7.1 channel surround sound in  AC-3, AAC, Dolby TrueHD and DTS Master Audio formats.

The card supports AMD EyeSpeed that is designed to bring beautifully rich and clear video playback from contents streaming from the web. In addition, it supports the AMD Avivo HD which is a hardware acceleration support for H.264 and WMV9 so that you can offload the work to the GPU and leave the CPU for other tasks. Not only the card will help with video playback, the included AMD App Acceleration that accelerate web browser, office applications and more from CPU to GPU. The new HD Media Accelerator that includes the updated Unified Video Decoder that is capable of decoding H.264, VC-1, MPEG2 (SD and HD), MVC (Blu-ray 3D), MPEG 4 part 2 (DivX/Xvid), Adobe Flash, DXVA 1.0 and 2.0 support, and WMV HD. In addition, the updated video codec engine (VCE) supports multi-stream hardware H.264 encoder for quick video transcoding. 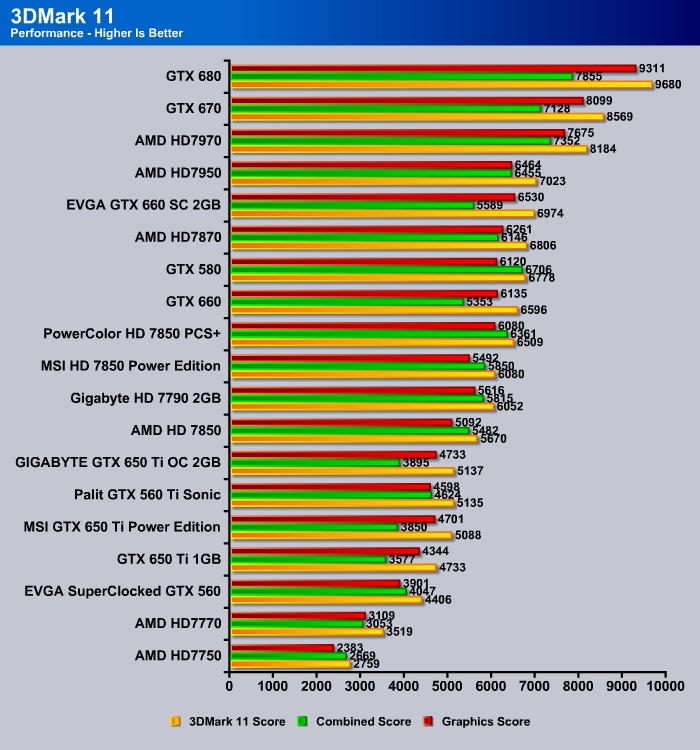 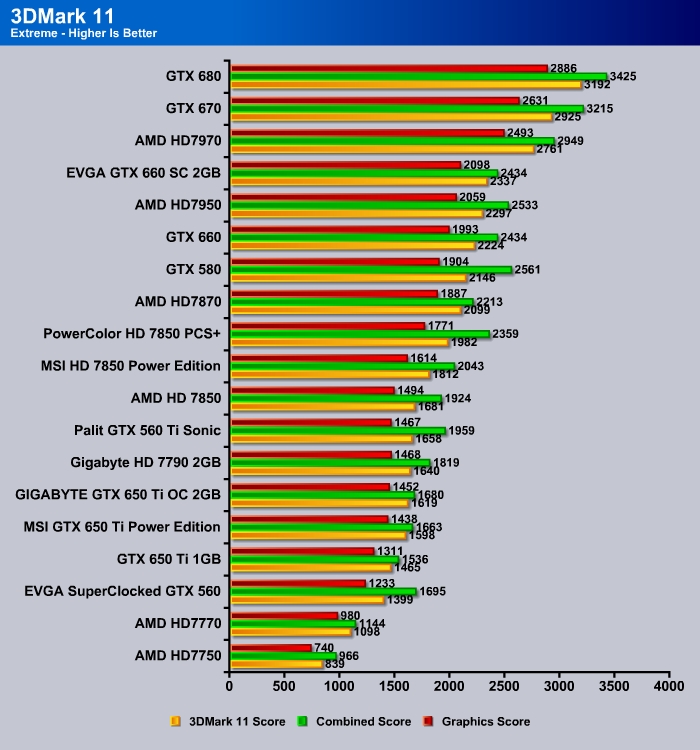 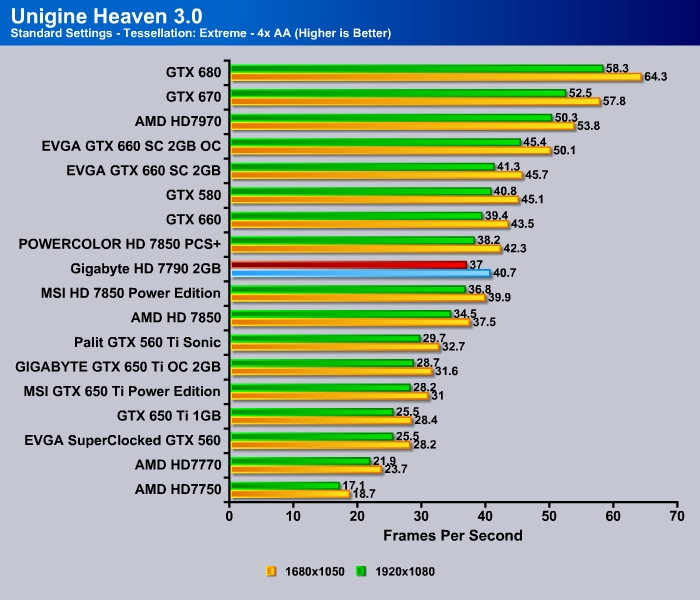 The 75MHz overclocking on the Gigabyte card helped out slightly with the performance where we can see the card edges out the reference HD 7850 but falls behind the PowerColor’s HD 7850 PCS+ that is also clocked at 1GHz. 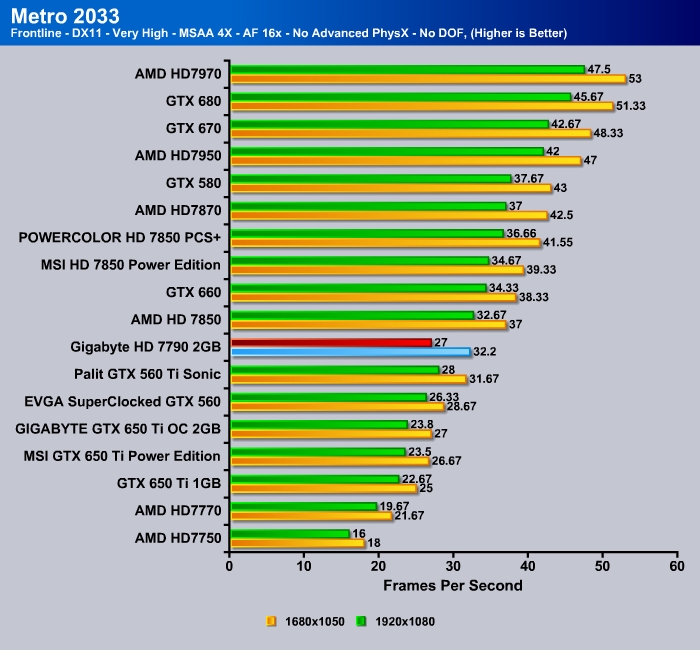 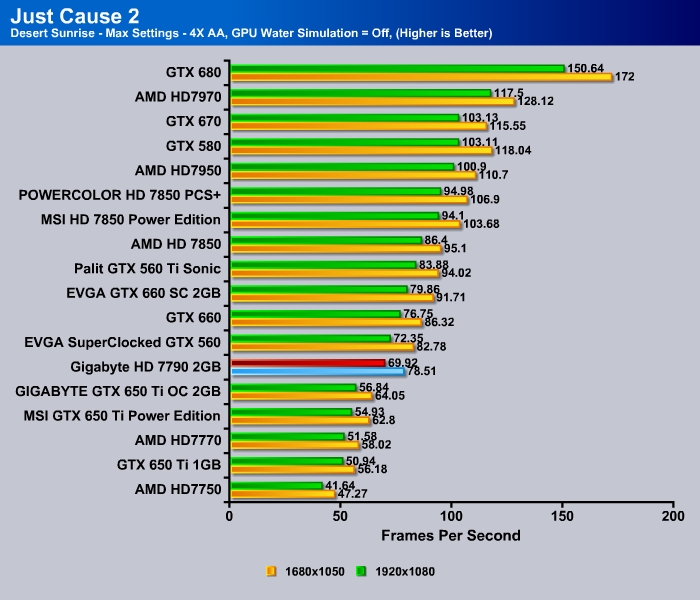 Here we can see that the Gigabyte HD 7790 edges out the GTX 650 Ti that is priced at same bracket. 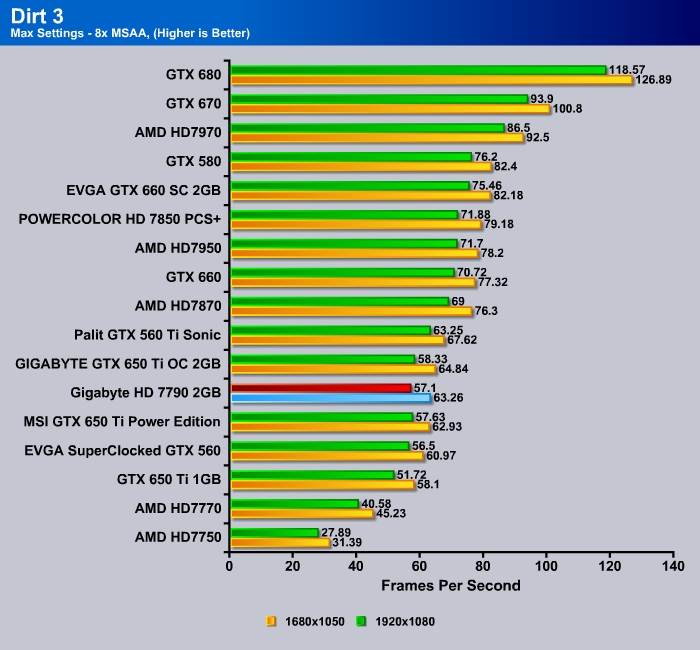 When comes to the operating temperature, the Gigabyte HD 7790 excels. The card operates at cool 32ºC idle and even under load, it keeps running cool at temperature below 60ºC. This is much cooler than the cards using AMD reference cooler.

Not only that the temperature of the card is excellent, the noise-level is also equally impressive. Under load, the fan spins at 1700 RPM (52%), which is barely audible in the system. If you are seeking for a quiet gaming card, then this may just be the card you are looking for.

We had high hopes with overclocking of the Gigabyte’s HD 7790 since the card runs extremely cool even under load. Unfortunately, it appears that the card suffered the same issue as every other HD 7790 that it cannot be oveclocked passed what AMD’s own OverDrive limitation of 1200 MHz core and 1600 MHz memory. The limitation seems to be set by the card’s BIOS and no matter what software we use, we just could not get it any higher speed. In the past, we were able to push other AMD cards with the Sapphire TriXXX for higher speed. However, with the HD 7790, the setting just return back to 1200MHz and 1600MHz despite the fact the software allows us to raise to higher value. We are a bit sadden to see that with such a great cooling solution could not provide us with an amazing overclocking potential.

Retailed at the $169.99, the HD 7790 2GB (GV-R779OC-2GD) offers good performance for a budget gaming card. If you only play game on a single monitor up to 1920p resolution, the HD 7790 should offer smooth game play without much of an issue. It should be able to play most current titles at high setting without any problem. When AMD first launched the HD 7790, the 1GB onboard memory is one of concern but with Gigabyte’s HD 7790 packed with 2GB onboard GDDR5, you do not have to worry that memory capacity will be holding you back. Obviously, the additional memory does cost a little bit of money but we feel that it is worth to spend a little bit more. Not only that Gigabyte packed the card with extra memory but it also overclocked by 7.5% and the custom cooler offers excellent cooling performance at extremely low noise-level.

If we have to be picky, we would like see the Gigabyte HD 7790 to come in the reference card’s length of 8.5 inches as oppose to 10.5 inches long. We think Gigabyte can actually rework the cooler slightly to fit the reference PCB as oppose to extend the length of the card. Heck, we even would not mind trading maybe a bit of cooling performance for a slightly shorter card. Especially since the card’s oveclocking is limited.

Overall, the Gigabyte HD 7790 2GB (GV-R779OC-2GD) offers good bang for the bucks. Despite its design shortcoming, it is still a good mainstream gaming card as long as you are not going to put it inside a small form factor PC then you can enjoy super quiet operation during the intensive gaming battle.

The Gigabyte HD 7790 2GB (GV-R779OC-2GD) design may not please everyone especially if you are looking to build a small form factor PC. However, it runs quiet and cool and provides good performance and price ratio.

The Gigabyte HD 7790 2GB (GV-R779OC-2GD) design may not please everyone especially if you are looking to build a small form factor PC. However, it runs quiet and cool and provides good performance and price ratio.