One thing to note is that we are revamping our testing method in order to better represent performance and feature offering to you guys the consumer. Also we want to make it an easier read for you without miles of endless charts. Please feel free to provide feedback on what you think as many benchmarks will be shuffled or removed completely.

We will use the following applications to test the performance of the notebook.

The results are quite impressive as we noted earlier that both the CPU and GPU share a common cooling fan and the fact that they both are cooled well within safe temperatures is an excellent result. It is worth noting that the fan is a bit thicker than most we have seen as this is a bigger chassis and therefore has more room for cooling equipment and it shows in the reported temps.

The Battery duration testing was performed by PowerMark which is a specially designed benchmark by Futuremark (Maker of 3DMark and PCMark) and shows battery expected life under different loading scenarios.

The power consumption tests are broken into 3 different loading types.

The ability to play for some decent time even with a heavy duty discreet GPU like the GTX 675MX is due to the decent heavy duty 9 cell battery. With the system specs we did not expect that much from it. 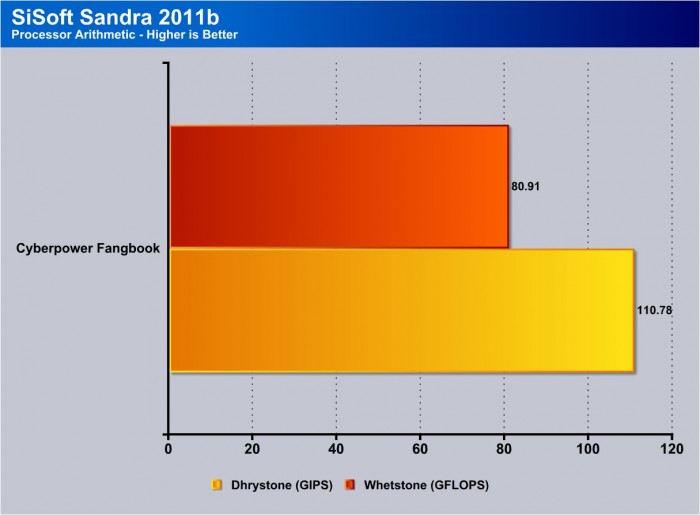 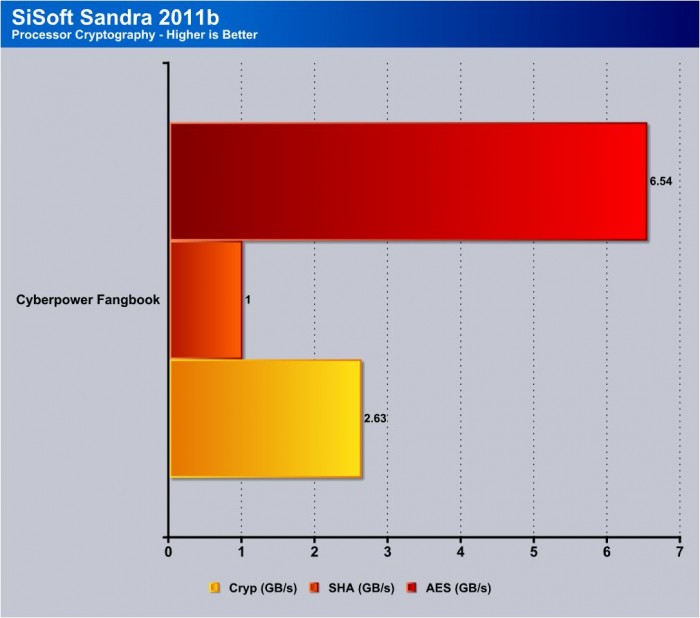 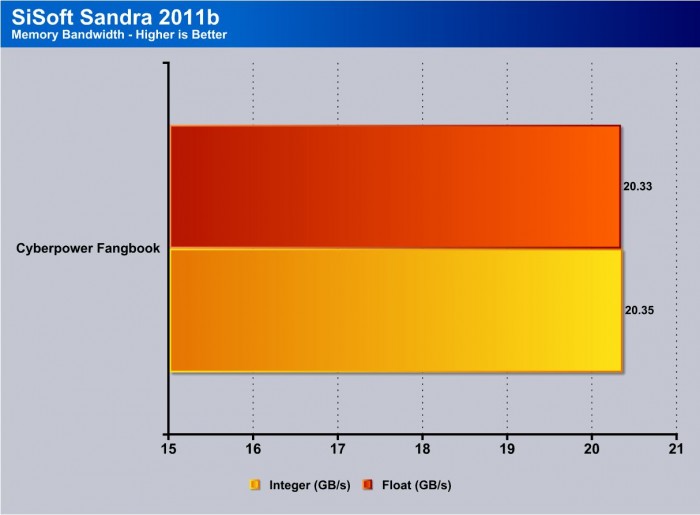 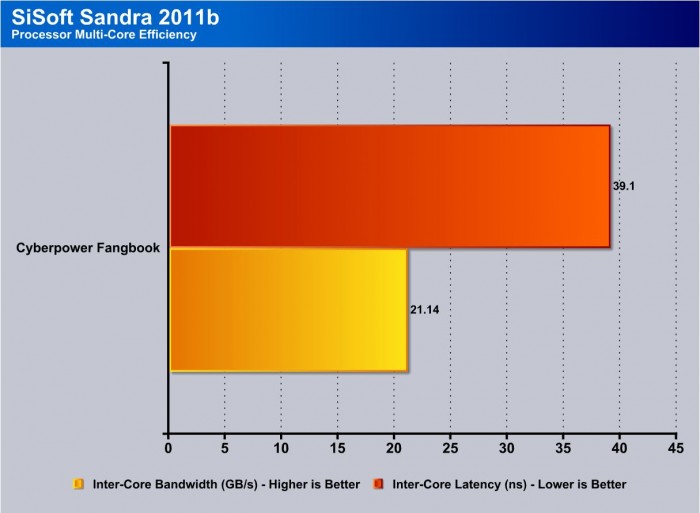 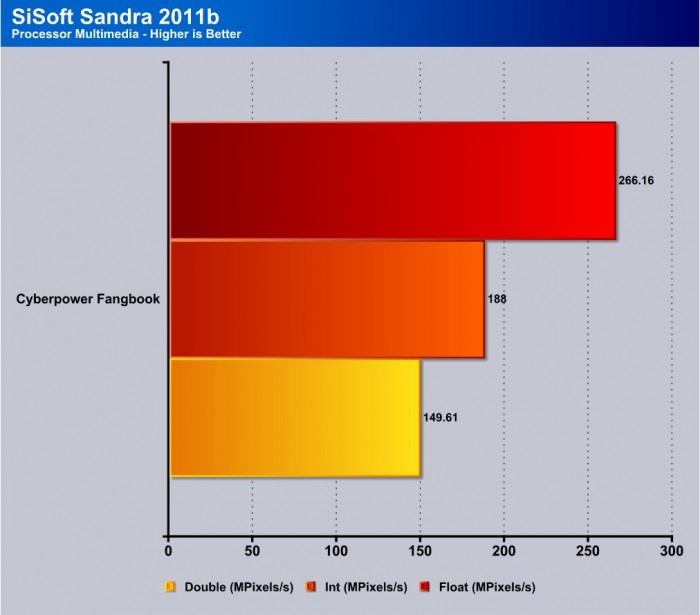 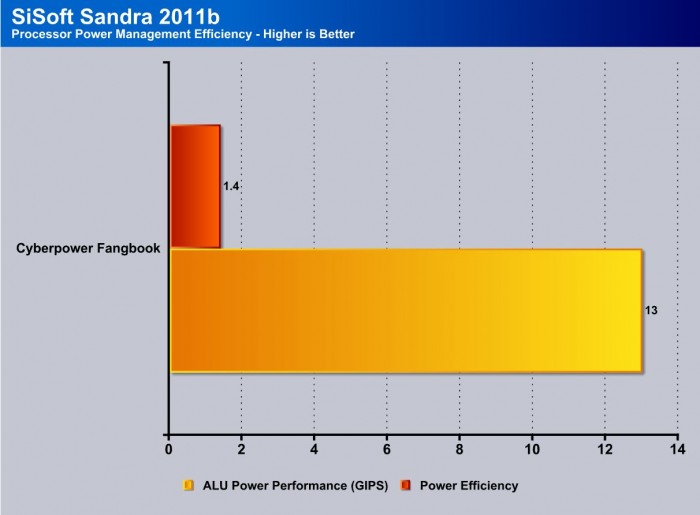 SiSoft Sandra has always been a go to benchmark for simple to interpret raw data on system CPU and subsystem speeds. Here once again as we have seen before the Ivy Bridge architecture simply impresses. It is very powerful and with the improved memory controller it has even more potential when paired with enough memory bandwidth. 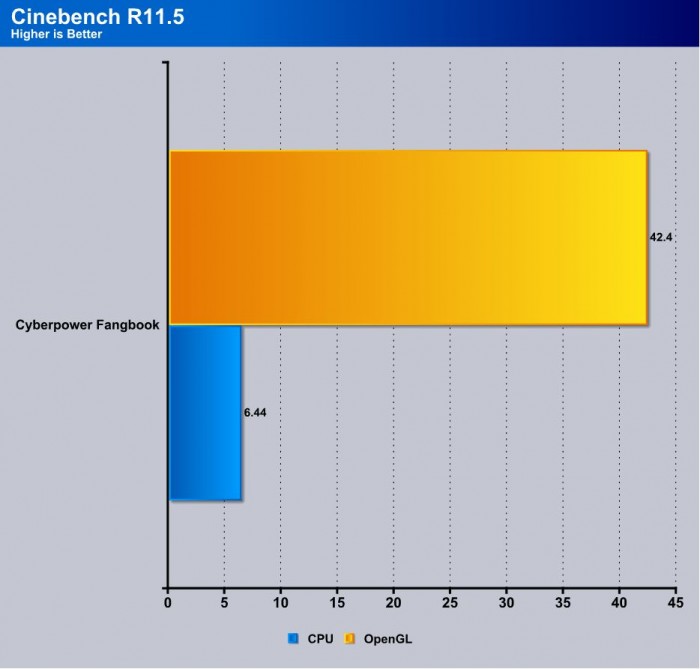 This gaming laptop has no shortage of rendering power as it bests even the faster Ivy Bridge we had in our previous X6-9120 system by a bit, and in OpenGL it definitely pulls ahead. 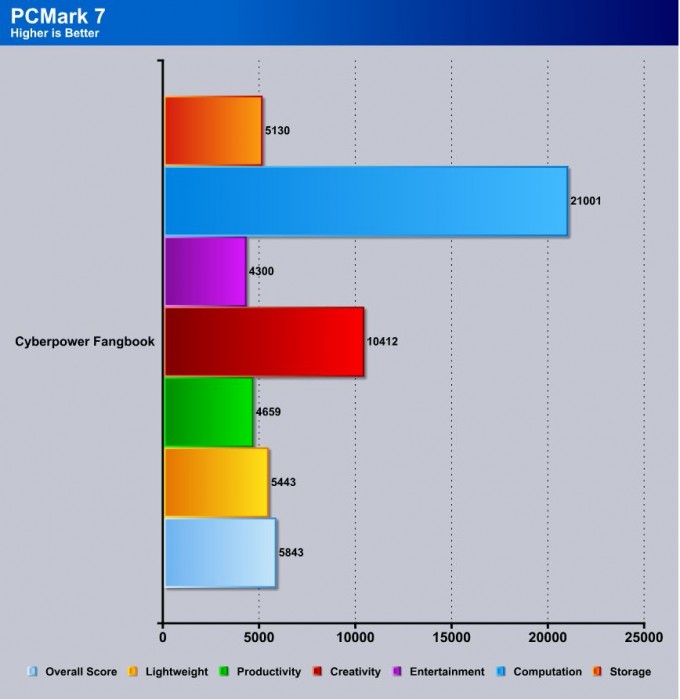 The PCMark benchmark gives a pretty good representation of system performance in multiple types of usage for your PC. Here you can see that all facets of the benchmark are steps ahead of previous notebooks we have tested but it definitely is no surprise as all of those notebooks were value notebooks made to do some of everything. The Fangbook is not that, it is built to be a monster and to have just loads of brute power which it does.

3DMark 11 is the newest in Futuremark’s suite of benchmarking utilities.  Its a fully capable DirectX11 benchmark which also stresses and analyzes the system performance as a whole to simulate a heavy rendering environment such as a high end game or other app the end user may run.  This benchmark was run with Performance settings 5 times and all runs were averaged for the result below. 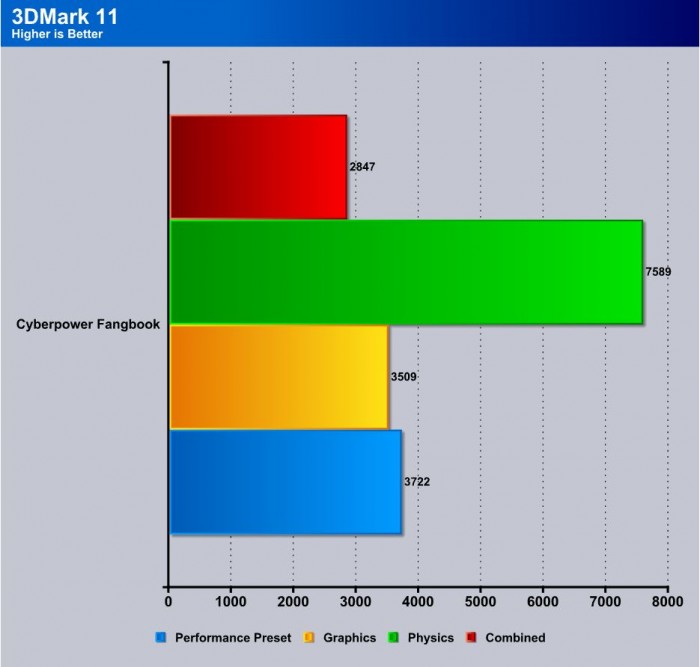 Here we see how the notebook scores on 3DMark 11 which is one of Futuremark’s most recent benchmarks barring the recent new 3Dmark released just last week. We will still use 3D11 for the foreseeable future until we can fully validate the new benchmark for repeatability and consistency of scoring. Here once again a very strong showing for this gamer as it really chewed through the benchmark and left some very good results for a mobile platform. 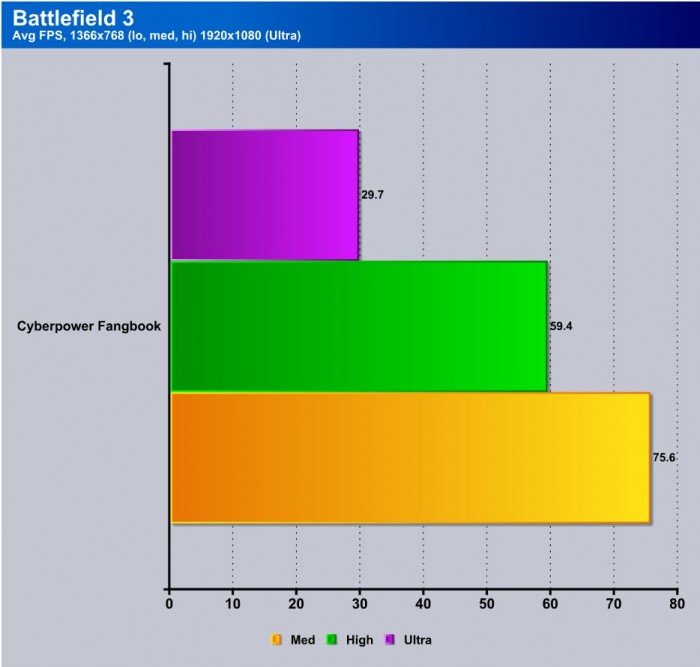 Battlefield 3 is a very popular first person shooter and at standard laptop resolution 1366×768 this machine eats the game alive. Only when pushing for ultra settings at 1080p do we see it drop to an area where it might have some stutters which once again is quite impressive as this game can put quite the hurt on a desktop GPU let along a mobile one. 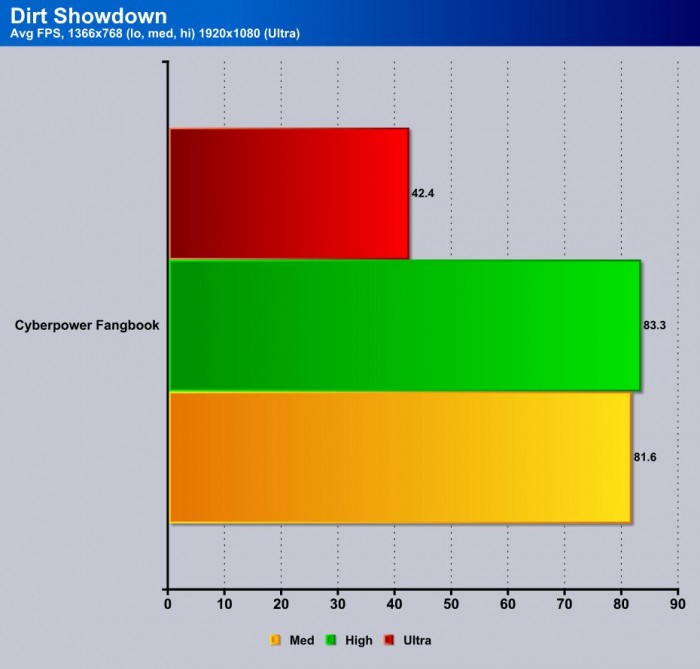 Dirt Showdown has some amazing lighting effects along with very smooth and simply pretty graphics. Well with the Fangbook even on ultra things should stay nice and smooth for you. 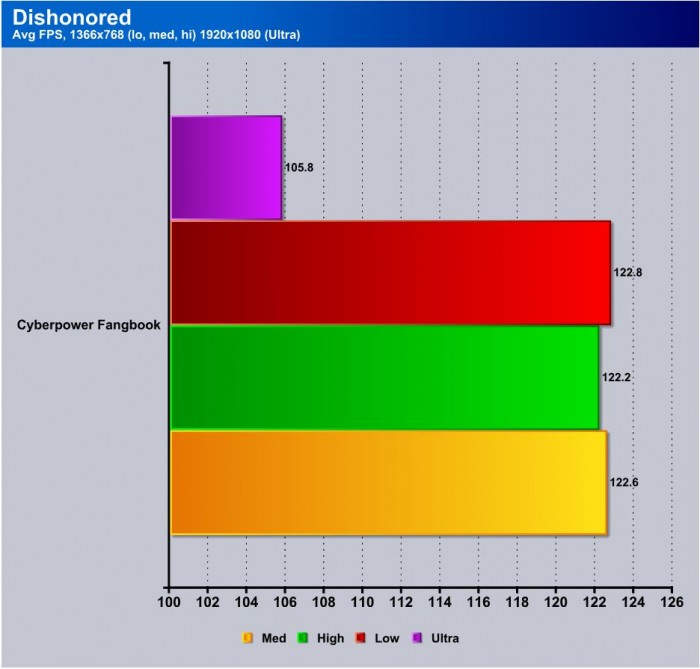 Dishonored is a newer game and a very fun one, and from testing not as stressful as it would appear, as the Fangbook spent only minor dips below 100 FPS but for the most part was at 100 FPS or above.

Need For Speed Most Wanted 2012 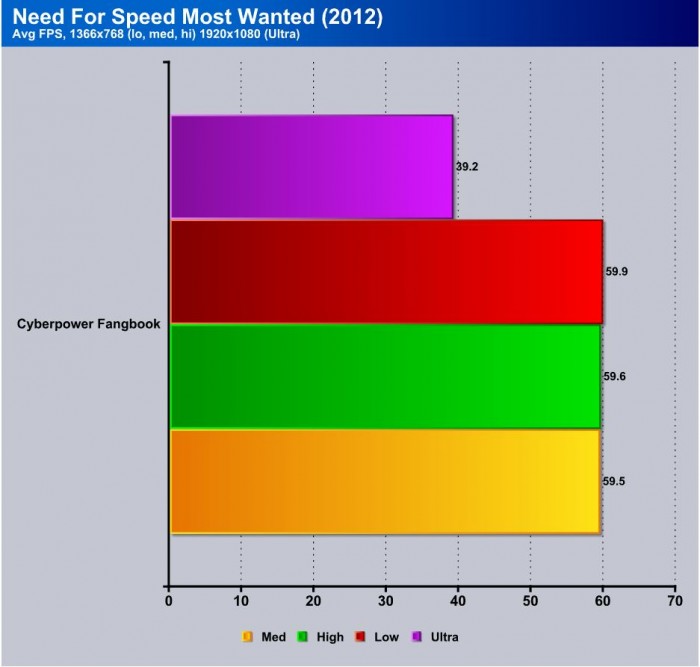 The Need for Speed franchise has been around for as long as we can remember now and it has continually added new eye candy to make it better and better with each installment. The newest one released just last year definitely knows how to make your system work for a good show and the Fangbook shows it some true power as even on the highest setting at HD resolutions it never dropped below 30 FPS and even stayed above 40 FPS for most of the run.

When we first heard we were getting the Fangbook, we knew pretty well what it was. Having tested other “gaming” laptops before, we knew they were usually very unbalanced toward one way or another; or even worse, they are so highly priced that it is just not reasonable. To find the perfect balance is an art of forms as you have to be able to take many things into consideration such as price, performance, size, noise and a balanced experience. By this, we mean tuning the machine so that all of the correct parts are offered to allow the system to have nice battery life when doing standard office docs and normal everyday web surfing while still being a game killer when your brain can take no more work and simply needs a break. We believe that after using the Fangbook Cyberpower has stumbled upon a great mix of performance price and usability that cannot be denied.

The Fangbook is a composition of elements all which lend themselves to different methods of functionality and this perfect combination allows for the performance you desire along with the power to keep you going when there is no outlet in sight. Adding Optimus capable components is always a good choice as Nvidia’s GPU switching is well matured versus AMD’s technology. Additionally, having the OS on an SSD saves power as SSD’s drain the battery less. With the dynamic throttling of the Ivy Bridge CPU you get even more power savings, and we still have not taken into account the fact that the GTX 675MX is a Kepler based GPU which is a lower 22nm die and with that comes better efficiency for lower power consumption over previous generation chips.

The backlit gaming keyboard really opens things up for gamers as you can now play in any environment without ever losing your place and with multiple profiles you can be sure you’re always ready for whatever your game throws at you. Add to this the anti-ghosting keys, and this is a gamer’s dream built into a laptop.

In a world full of tablet gamers, Cyberpower uncages a beast of a gaming notebook that will rip through anything from Angry Birds to your favorite FPS. Seeing the raw power and awesome style of the Fangbook alone is enough to make us want it but using it has sealed the deal and it has reached “Must Have” status.

If you’re looking for desktop level performance that you can take with you, the Cyberpower Fangbook is your answer and with Cyberpower’s customization options you can be sure it will fit everything you need it to do and then some.