NVIDIA introduced their new GTX 650 Ti today, tailoring it towards “gamers who want to enjoy their games at 1080p resolution with medium to high settings”, along with some anti-aliasing enabled. For more detail about the latest GeForce GTX 650 Ti, check our our reference design review of the Nvidia GeForce GTX 650 Ti. In addition to a decent overclock, the card comes with an awesome looking aftermarket cooler: the Cyclone II.

Today we’ll take a look at the MSI card and see how it compares with the NVIDIA reference design, and also how it stacks up against other GTX 650 Ti’s. The MSI GTX 650 Ti comes in at an MSRP of $159.99, just $10 higher than the reference design. 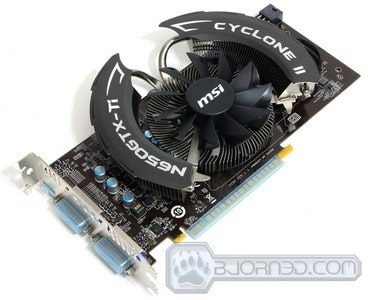 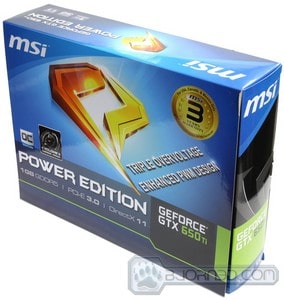 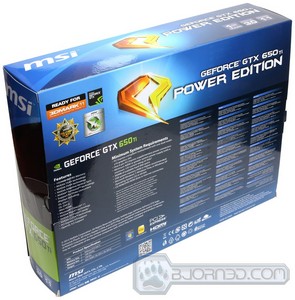 The MSI GTX 650 Ti Power Edition comes in the standard blue box with the yellow logo on the front. The box highlights the three-year warranty, the enhanced PWM design, and the Triple-Overvoltage feature of the card. The back of the card contains the standard listing of feature, system requirements, and information in multiple languages. 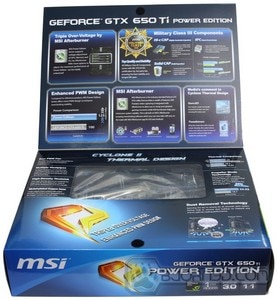 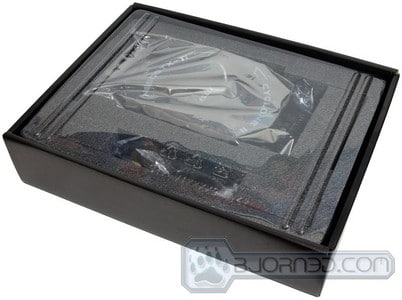 The flap on the box hides the usual spate of marketing jargon, screaming phrases like “Enhanced PWM Design” and “Triple Over-Voltage”. The card uses Military Class III components, including the Hi-c Caps, solid capacitors, and super-ferrite chokes. These components are designed with high-quality materials to minimize the amount of power leakage the card components have. In addition, the components ensure greater stability when overclocking, though the utility of these components on a card meant for the midrange market is something that we’ll have to examine as time goes by.

The MSI card comes with a sparse, but functional accessory bundle, containing the Power Edition manual, a Quick User’s Guide, a VGA to DVI adapter, a mini-HDMI to HDMI adapter, a PCI-E to PWM power cable, and a disc with drivers. 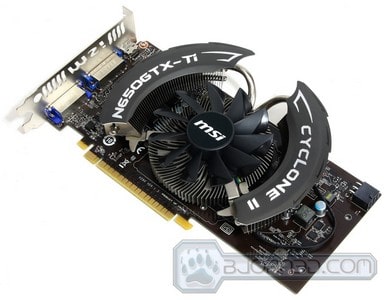 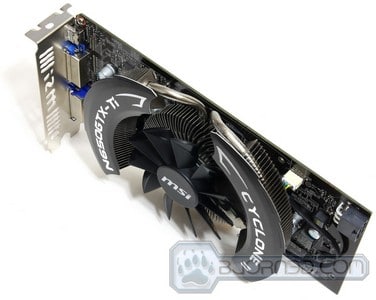 Here we see pictures of the card itself. The biggest change between this card and the reference card is that the MSI power edition uses a totally different design. Whereas the NVIDIA reference card is only as long as the PCI-E slot, this card is about as long as the GTX 660 Ti, a full-length video card. In addition, this card uses the totally different Cyclone II cooler, which looks kind of like a crab rearing its pincers. However, we can say that one thing we like about the cooler design is its openness. It seems like it should be much easier to get dust out of this cooler than out of the NVIDIA stock cooler, which carries a shroud over it. Additionally, the cooler comes with the reverse-spin Dust Removal technology, so it will require less cleaning than the reference cooler. However, it was also the loudest of the lot, a b it more audible than the reference cooler. 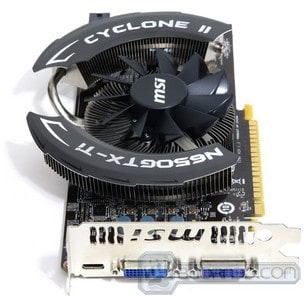 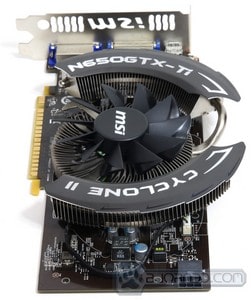 Here we can see the outputs of the card: one mini-HDMI, one DVI-D, and one DVI-I. Like the NVIDIA reference card, the GTX 650 Ti Power Edition card does take up two slots instead of one, so plan your system accordingly. It is powered by a single 6-pin PCI-E power connector, which draws 75W of power. The card’s TDP is set at 110W, though MSI’s headquarters claims that during their testing they got a maximum of 80W for the TDP. At the right-hand side of the cooler, we can see one of MSI’s signature Super-Ferrite Chokes, which they advertise on their packaging. 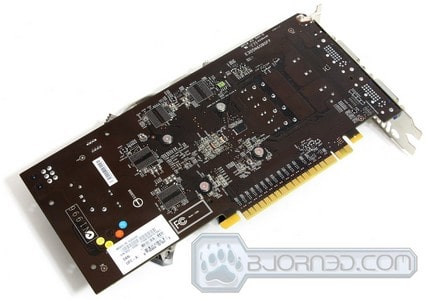 Here we get a shot of the rear of the card, which shows the circuitry on the back near the GPU.

The OS we use is Windows 8 Pro 64bit (Retail) with all patches and updates applied. We also use the latest drivers available for the motherboard and any devices attached to the computer. We do not disable background tasks or tweak the OS or system in any way. We turn off drive indexing and daily defragging. We also turn off Prefetch and Superfetch. This is not an attempt to produce bigger benchmark numbers. Drive indexing and defragging can interfere with testing and produce confusing numbers. If a test were to be run while a drive was being indexed or defragged, and then the same test was later run when these processes were off, the two results would be contradictory and erroneous. As we cannot control when defragging and indexing occur precisely enough to guarantee that they won’t interfere with testing, we opt to disable the features entirely. 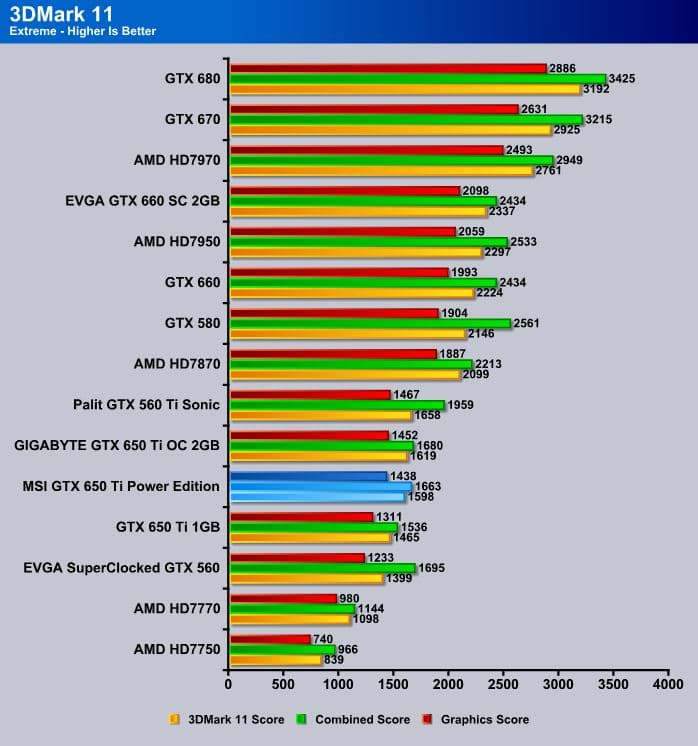 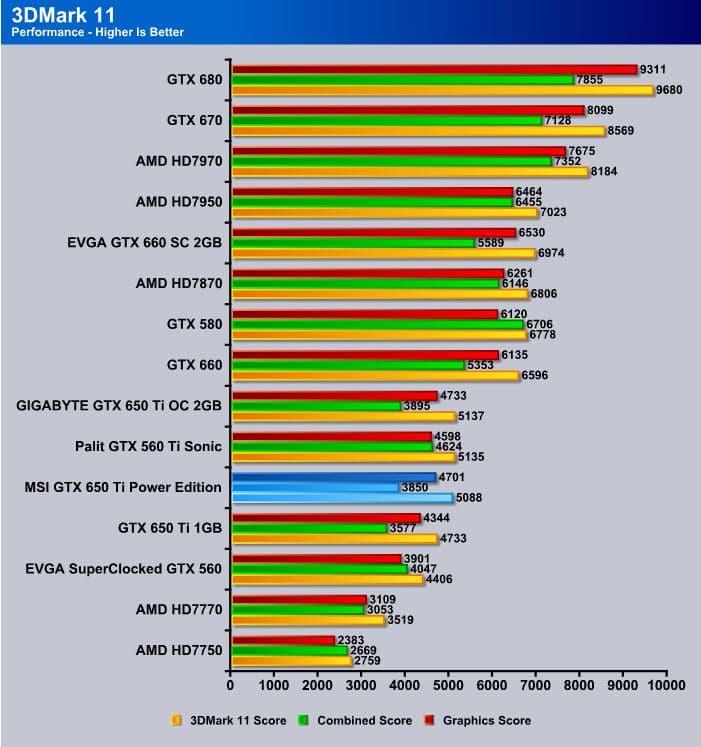 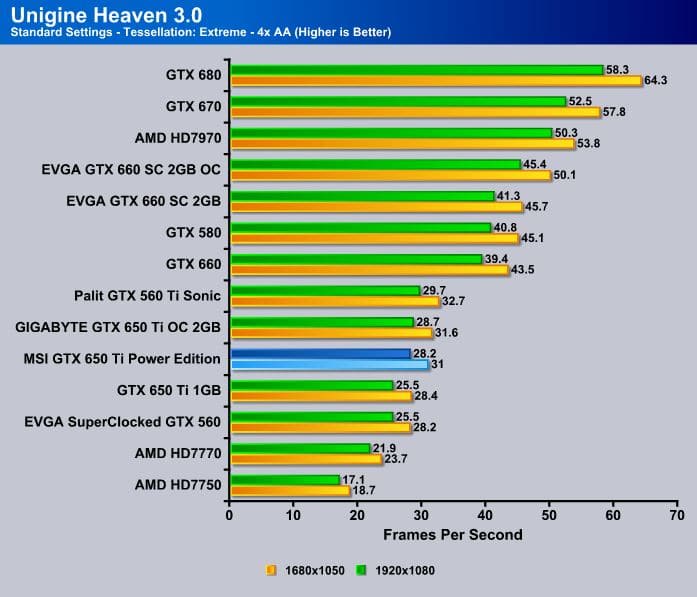 Here the MSI GTX 650 Ti comes in as performing better than the reference card due to the overclock, but just a hairsbreadth under the GIGABYTE version, probably due to the GIGABYTE card’s higher clockspeed and extra GB of video memory. 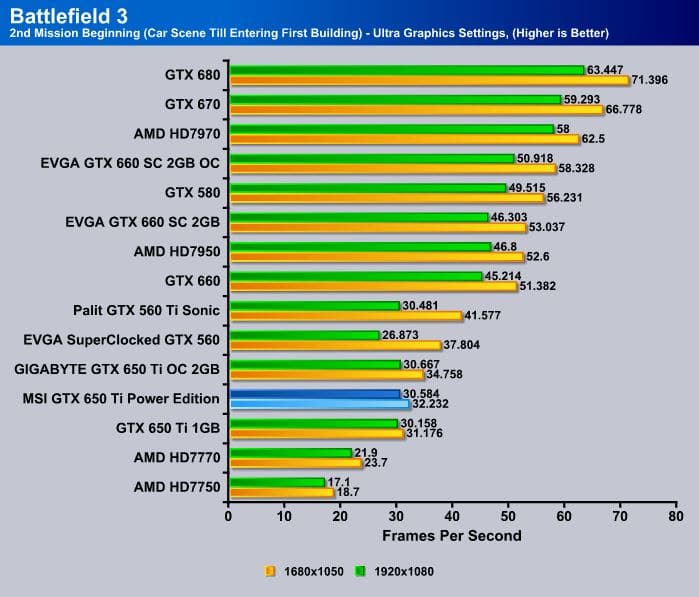 In Battlefield 3, the 650 Ti comes in at just a hair over the playable frame rate, once again outperforming the reference card thanks to the factory overclock. 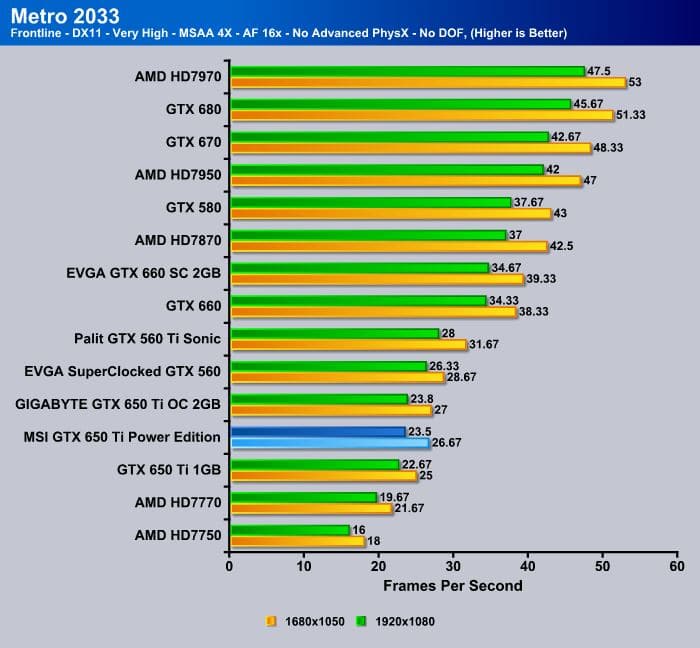 Metro 2033 is a demanding game: the Crysis of today’s benchmarking. Very few single GPU cards can handle it, and the mid-level GTX 650 Ti predictably fails to keep up at very high settings. However, keep in mind that this card isn’t meant to handle this level of gaming. 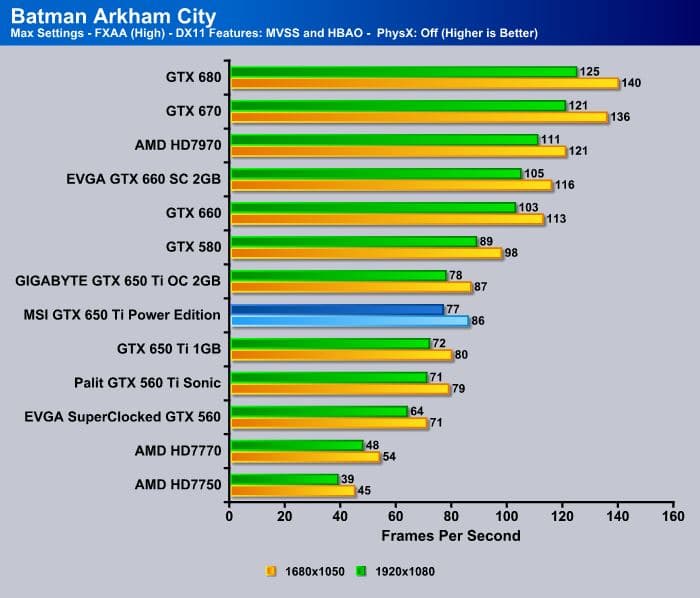 The card does very well in Batman: Arkham City, beating both 560’s and the reference card. 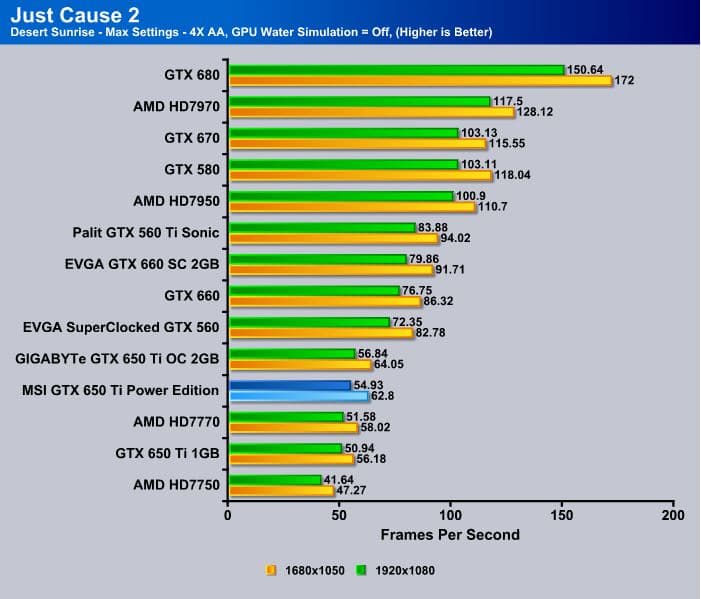 The card again performs well in Just Cause 2, showing the benefit of the factory overclock as it definitely outpaces the reference card. 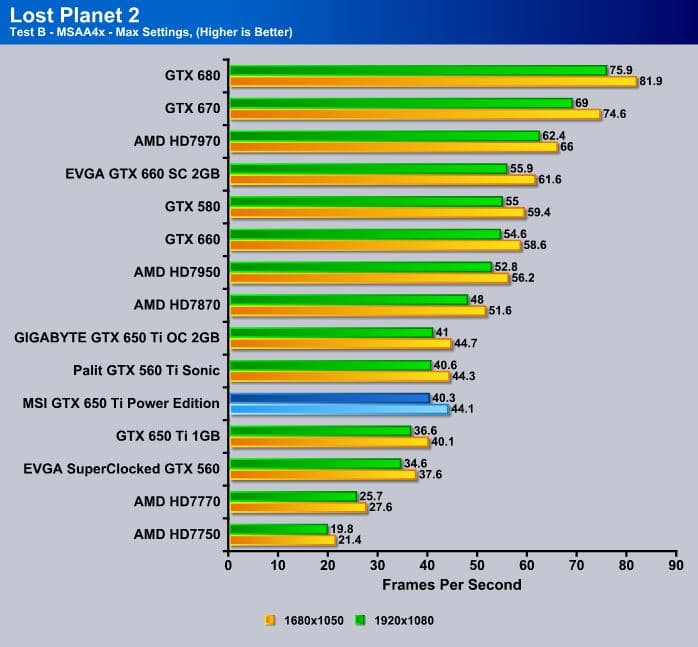 The card again does well in Lost Planet 2, its factory overclock pushing it into the smooth gameplay zone. 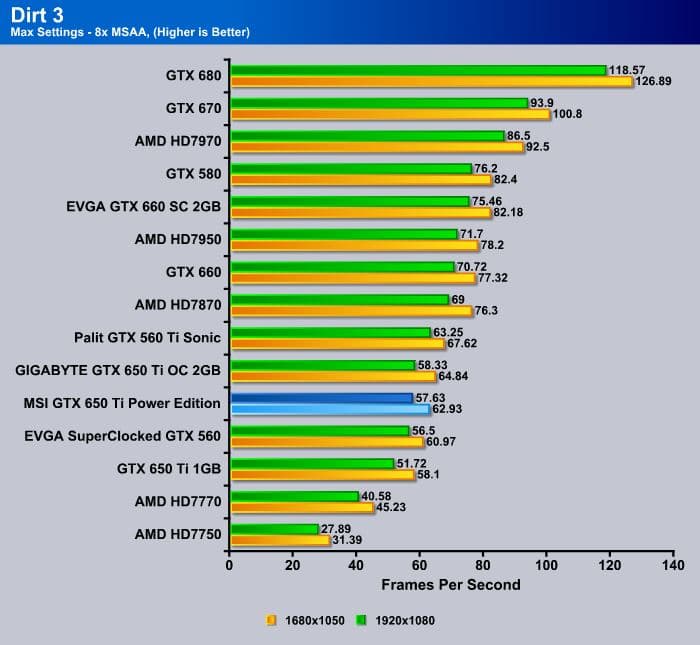 Dirt 3 is not as intense of a game, and we can see that the card does very well in this benchmark 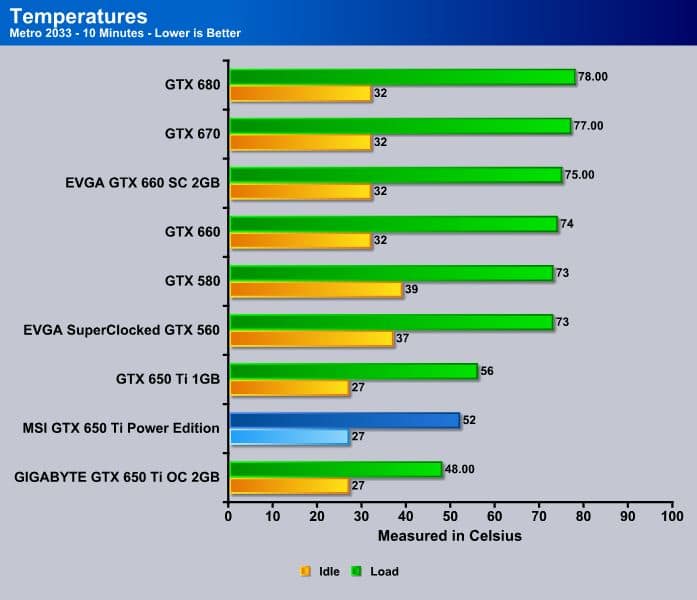 The Cyclone II cooler on the MSI card shows its strength here, though it is outperformed slightly by the GIGABYTE card. On the other hand, when we check out the overclocking possibility of the card and its cooling potential, the MSI card has far the best cooling solution installed. The temperatures won’t rise much higher, keeping it the coolest card among the tested even at the highest overclock. 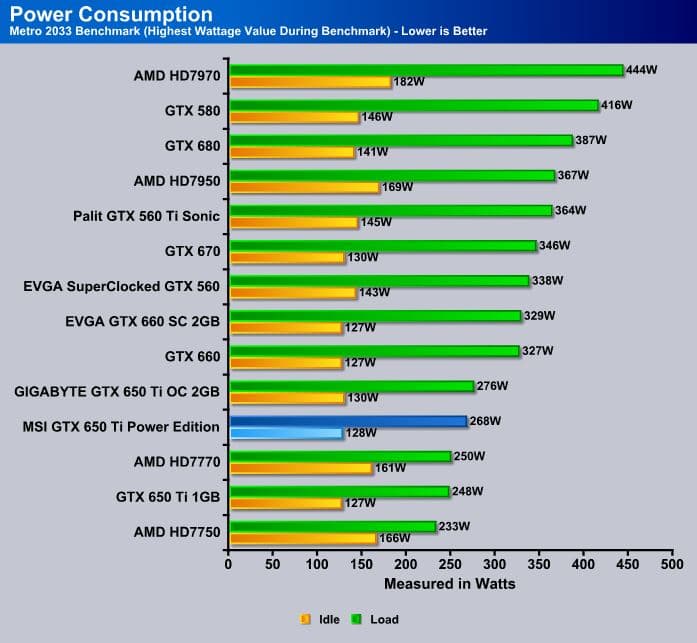 Overclocking was done with Precision X overclocking utility. We first raised the voltage on the card to 1075mv, which was the maximum voltage available on the MSI GTX 650 Ti Power Edition. The GIGABYTE GTX 650 Ti 2GB video card only allowed up to 1063mv, therefore the overclocking potential was better on the MSI card. The Core Clock speed was ultimately raised up to 1220 MHz and the memory frequency to 5930 MHz. Those were the highest stable overclocked settings.

The results were quite great as well:

The MSI GeForce GTX 650 Ti is a good card for its market. It may not have the capacity to play all games at the highest settings, but remember that this card was not made for that. As a mid-range gaming card, it definitely fulfills its potential and more, in terms of performance. The card even gets close to 25FPS in Metro 2033, the most demanding game we have tested to date. The fact that a mid-range card has this kind of capacity is great, and MSI’s factory overclock only helps. Its solid construction also gives it a boost, and the overclocking headroom granted by MSI’s use of Military Class III components gives mid-range gamers a little more room to work with when overclocking their hardware.

The Cyclone II cooler is also well implemented, cooling the card down significantly at a quiet operation. Additionally, the card only comes with only three display outputs, though the GTX 650 Ti GPU has the ability to support four. The reference design also has three outputs, but we feel MSI might have added a fourth just to sweeten the deal a little. The ultimate choice is up to you as the end-user, but we see no reason not to recommend this card as a potential GPU for the mid-range gamer, especially considering performance at value.