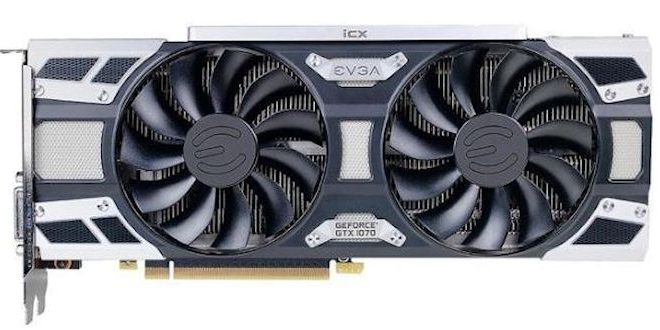 We found the iCX cooling solution elegant and the included 9 (+1 on the core) sensors monitoring the memory and VRM’s are a much welcomed and overdue addition to EVGA’s lineup! We have long desired more than a generic core temperature reading and EVGA delivered monitoring in spades. Now with a glance at EVGA Precision XOC we can tell if it’s the Core, VRM’s or Memory that are running hot which enhances OCing and gives “Peace of Mind Gaming” it’s true definition. You can also just glance at the beauty plate on top the card and LED’s will give you a quick and dirty glance at how things are running which is great for gaming and when you don’t want Precision XOC open. As usual, EVGA has engineered to perfection and given more than expected!

The only real decision here is if you want to spend more money and get the GTX 1070 FTW iCX with 10 Phase power and dual BIOS. Some people will give a few bucks more for the beefier card and some will go for the SC2 iCX. The iCX models seem to be running about $20 more than the ACX 3.0 models and having hands on the iCX card we would go the few extra bucks for the iCX model with no hesitation. High-end enthusiast video cards are expensive and worth the extra monitoring. The iCX cooling solution on the EVGA GTX 1070 SC2 Gaming iCX offers to protect your investment taking Video Card monitoring to a whole new evolution!