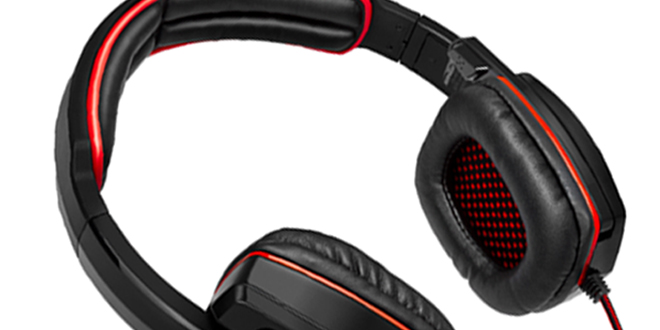 Here at Bjorn3D we have started to become more familiar with Sentey in the past few months, having taken a look at two of their gaming mice, as well as a PC case. Prior to our recent reviews, we were unaware of any of the products that Sentey manufactures. We have a feeling that Sentey will begin to become a more recognizable name in the upcoming months, as they have really been pushing hardware to reviewers to get their name out there. Case in point, today we are having a look at the Arrow headset, specifically the GS-4522. The Sentey Arrow GS-4522 headset is part of Sentey’s Elite Gamer Series of products, which looks to be a level lower than their Professional Gamer Series.

While the Sentey Arrow headset may not be full of bells and whistles, it does have a few features that are worth noting.

Before we get too far into this review, we would like to point out that Sentey actually has three versions of the Arrow headset: the GS-4520, GS-4521 and the GS-4522. The GS-4520 and GS-4521 both feature 3.5mm connectivity for the audio and microphone connections, while the GS-4522 that we are reviewing has a single USB connection for virtual digital 7.1 surround.

Below is a look at all the specifications that Sentey lists on their site for the Arrow GS-4522. 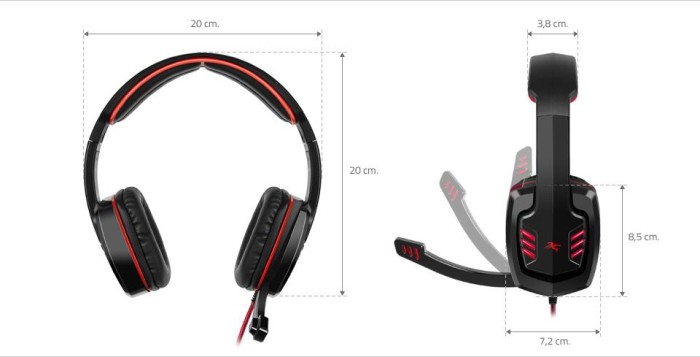 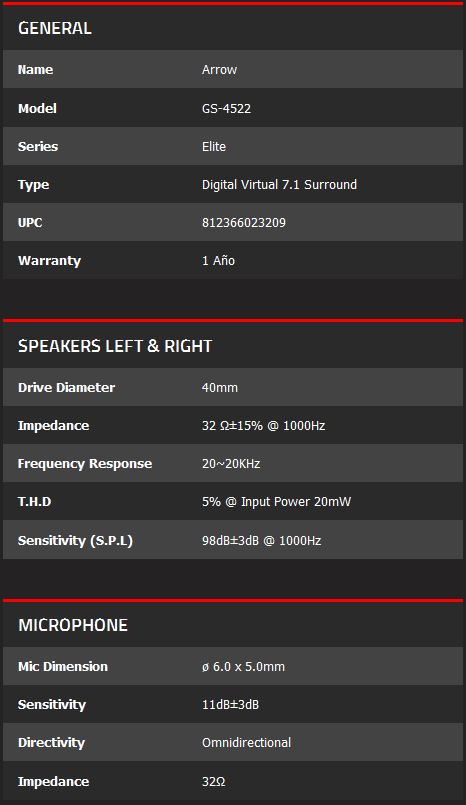 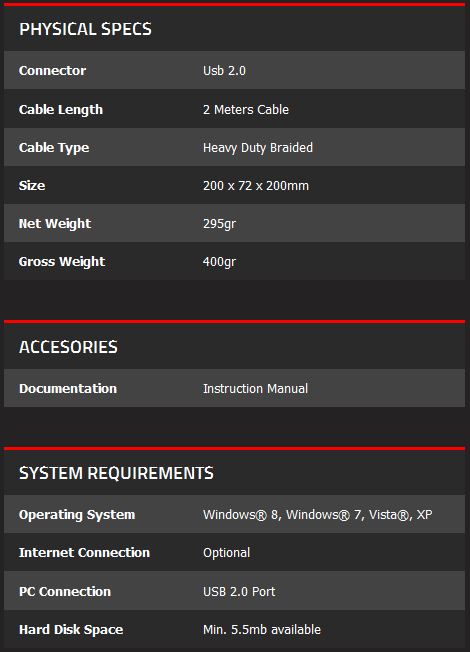 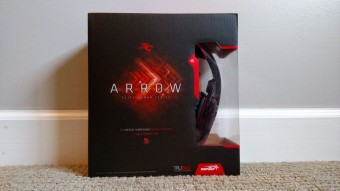 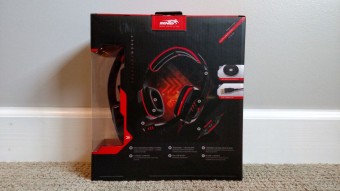 The body of the Arrow headset is made almost entirely out of molded black plastic with both glossy and matte finishes on various components. Both sides of the headset feature a small Sentey logo flanked by pulsating LED lights. These color of these lights, as well as the speed of the pulsating, are adjustable via the in-line remote located on the braided cable. 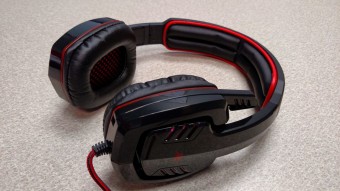 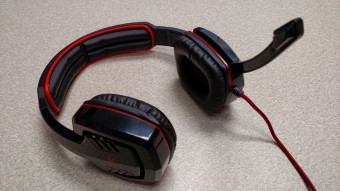 The headband connecting the two sides of the headset has a matte finish to it, and features a molded, faux-leather pad, trimmed in a red ,rubbery plastic surround. The headband also features a ratcheting adjustment mechanism on each side to allow for various head shapes and sizes. 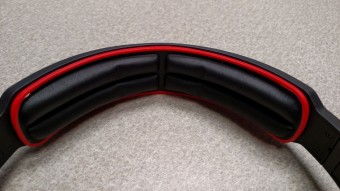 As previously mentioned, the ear cups feature a molded, glossy body, and feature a transparent, red layer between the body and the ear pads. The ear cups are slightly independent from the frame of the headset, and allow for a small bit of adjustment for comfort. The left ear cup is home to the retractable microphone that swings up and down for ideal placement. 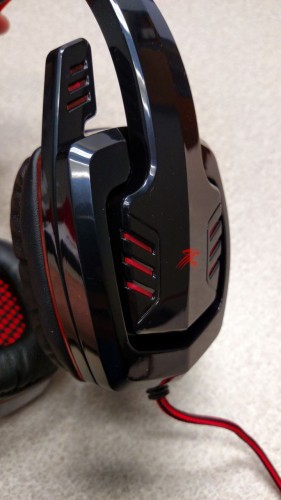 The ear pads on the Sentey Arrow feature soft, faux-leather material. The actual padding in these pads is a bit lacking, but is very soft to the touch. Behind the minimal pads is a cloth speaker cover featuring a red and black checkered pattern. This cloth helps keep the internal speaker clean, and also give the headset a nice finished look. 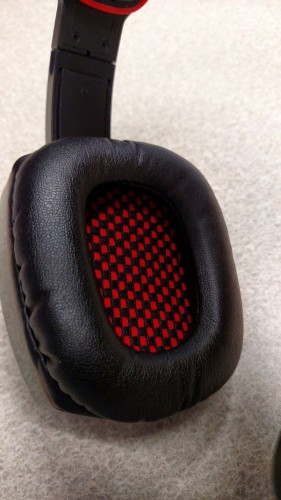 Attached to the bottom of the left side of the headset is the 6.5ft long cable. A little over a foot down the cable is the control module for the Arrow. At the top is a small dial to adjust the volume of the headset. Just below the dial is a button that mutes the speakers in the headset: a handy feature for when you need to quickly mute your sound. Right below that button is a microphone mute button. The bottom portion of the control module is home to a slider that adjusts the pulsating speed of the LED lights on the body of the headset, as well as the lighting on the module itself. There is also a small button that cycles through seven available colors. 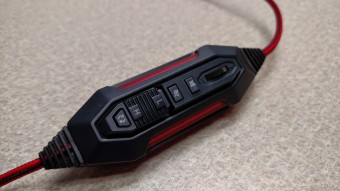 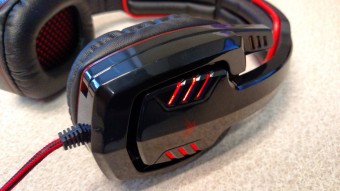 The Arrow comes with a basic software application that allows users to adjust a variety of settings for the digital audio headset. Basic mixing options are available, as well as your standard equalizer settings and environmental presets. A few “Magic Voice” settings allow for some basic voice modulation effects. 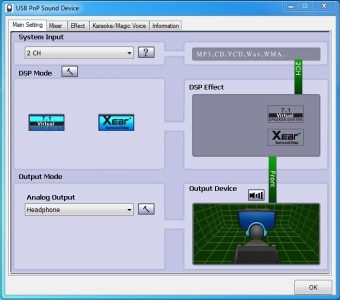 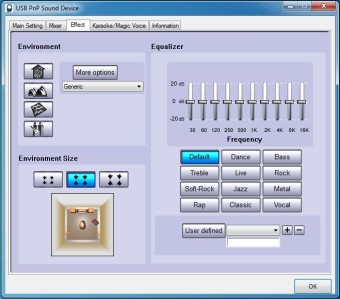 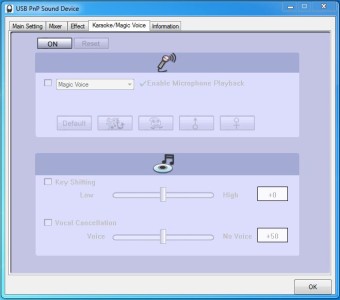 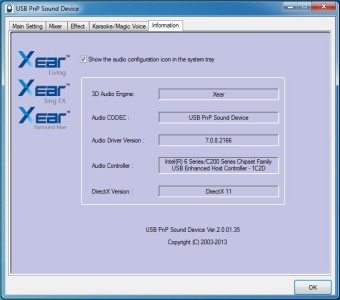 We don’t profess to be master audiophiles here at Bjorn3D, but we do have some standards that we like to hold our audio devices to. Since the Sentey Arrow is heralded as being a gaming headset, most of our testing was performed in a gaming environment. We did however run the headset through a playlist of various songs that feature a wide variety of sounds and styles to get a good feel for how the headset performs outside of it’s gaming duties.

As mentioned earlier, the Arrow headset features a plastic headband that can adjust in size depending on your head size. Unfortunately for us, the smallest setting on the Arrow was still slightly loose feeling. Not to the point of falling off, but loose enough that it didn’t always feel like we had a good seal from the ear pads. Speaking of ear pads, those found on the Arrow are for the most part comfortable, but seemed to get a little warm for our liking when used for extended periods. Overall the Arrow was comfortable to wear, even though they did feel a bit loose.

We have been playing a lot of Blizzard’s Heroes of the Storm recently, and the sounds of battle rang out loud when using the Arrow headset. The same can be said when we were playing Marvel Heroes 2015. The character sounds and battle ambiance were all very clear. One thing we did find lacking was the low-end performance of this headset. No matter what settings we changed, we just couldn’t get the Arrow to produce deep lows.

Our playlist features a variety of styles of music from hip-hop tracks to 60’s and 70’s classic rock. Artists from Daft Punk to Creedence Clearwater Revival make an appearance on our testing playlist, and in all instances, we once again found the Arrow lacking on the low end. The upper end of the audible spectrum sounded fine, but we were constantly hoping for more “oomph” from this headset.

Just like the sounds the Sentey Arrow produces, there are both highs and lows with this headset. One of the greatest features, and something that is common among most of Sentey’s offerings, is a low price. Sentey sells the Arrow GS-4522 headset via Amazon for $25 USD. You won’t find many headsets of this quality at that low price. If custom lighting colors is your thing, then the Arrow may be what you have been looking for, as it has the ability to glow one of seven different colors, controlled by the in-line control module.

While we can’t complain too much about the sound being produced by a $25 headset, the Sentey Arrow just didn’t give us the deep bass that we were hoping for. The overall build quality of the headset is pretty good, but the molded plastic and faux-leather has a bit of a cheap look to it.

In the end, you get what you pay for, and in this case you probably actually get a little more with the Sentey Arrow GS-4522 headset.

The Sentey Arrow GS-4522 is a budget-priced headset that offers decent performance.